Moments ago I posted the news that the HHS Dept. (via the Centers for Medicare & Medicaid) has confirmed what I wrote about nearly a month ago: Enrollment in ACA healthcare policies are at an all-time high, with over 31 million Americans currently covered by either ACA exchange plans, ACA Medicaid expansion or ACA Basic Health Plan coverage.

This news is based on a formal report issued by the Assistant Secretary for Planning & Evaluation (ASPE). Let's take a closer look!

Based on enrollment data from late 2020 and early 2021, approximately 31 million people were enrolled in Marketplace or Medicaid expansion coverage related to provisions of the Affordable Care Act (ACA), the highest total on record.

Again, it's important to note that the 18.8 million Medicaid expansion enrollee figure (14.8 million + 4.0 million) only run through December; as I've noted in several state-level analyses, Medicaid expansion has continued to grow in many states since December. It could be as high as 16 million today, though that's unknown for now (and it's probably started to drop off a bit as the economy improves and people go back to work).

For both Marketplace and Medicaid expansion enrollment, we present the most recent administrative data with state-by-state totals from the Centers for Medicare & Medicaid Services (CMS), as well as historical national totals for the years 2014-2020.

For states that have expanded Medicaid, the enrollment data provide specific counts for the number of individuals enrolled in the new expansion adult eligibility group, referred to as the “adult group,” with separate totals for those who became newly eligible under the ACA expansion, as well as those who would have been eligible for coverage prior to the ACA but are now part of the adult group. State Medicaid expenditure reports are generally submitted to CMS within 30 days following the end of each quarter. Some states, however, submit their expenditure reports later; accordingly, these results should be considered preliminary.

Minnesota and New York have also implemented the Basic Health Program (BHP) option under the ACA to cover individuals with incomes between 138-200% FPL. We report annual average BHP enrollment, as reported to CMS by the states.

Estimates on the uninsured come from the American Community Survey (ACS), the largest national survey of households. The Census Bureau surveys almost 300,000 households each month for the ACS and collects health insurance and demographic data, along with other types of information. Uninsured rates for the full state population of all ages come from the ACS’s public data tables for 2013 and 2019 (the most current year of ACS data available), which we used to compare state-by-state changes in uninsured rates since the implementation of the ACA.

Table 1 and Figure 1 present national ACA-related enrollment for 2014-2021. As of February 2021, 11.3 million consumers had enrolled and effectuated health insurance coverage through the Marketplaces. This estimate does not include individuals who have signed up for coverage during the COVID Special Enrollment Period (SEP) for HealthCare.gov that began on February 15, 2021, and runs through August 15, 2021. Since the SEP began and new outreach funds were also made available, over 1 million additional consumers have signed up for a health plan through HealthCare.gov. This total does not include any impact from expanded SEP opportunities offered by the 15 state-based Marketplaces in 2021.

At the close of 2020, an estimated 14.8 million newly-eligible adults were enrolled in Medicaid coverage through the adult group created by the ACA expansion, as shown in Table 1. An additional estimated 3.9 million people were enrolled in the Medicaid expansion adult group under the ACA who would have been eligible for Medicaid before the ACA. The ACA, however, simplified Medicaid enrollment for these individuals and made permanent under federal law some state-specific coverage expansions that pre-dated the ACA (e.g., coverage under a section 1115 demonstration project). To date, 37 states and the District of Columbia have adopted the ACA Medicaid expansion of coverage to adults.

Taken together, these results indicate that overall enrollment in Marketplace coverage, Medicaid expansion, and the Basic Health Program for 2021 was approximately 31 million people, the highest enrollment total since the ACA was enacted.

And again, this does NOT include:

*it's even possible that President Biden let this number slip in the video released by the White House a little while ago...he makes a reference to "1.2 million people signing up on top of the 30 million" which may be a preview of the next CMS SEP enrollment report through the end of May...or it may not be:

If you include all of those, total ACA enrollment could be as high as 33.5 million people...or exactly 10% of the entire U.S. population.

UPDATE: D'oh!! I completely forgot OFF-exchange ACA enrollments as well! These were pegged at 4.1 million by CMS back in 2016, and while they've dropped significantly since that time (some people moved to on-exchange plans already counted above; some moved to other types of coverage), there's still at least 1.5 million people enrolled in unsubsidized ACA-compliant policies directly via their insurance carrier. These policies are still ACA-created as they include all the patient protections of on-exchange plans.

Throw them into the mix and the grand total could potentially be as high as 35 million Americans. 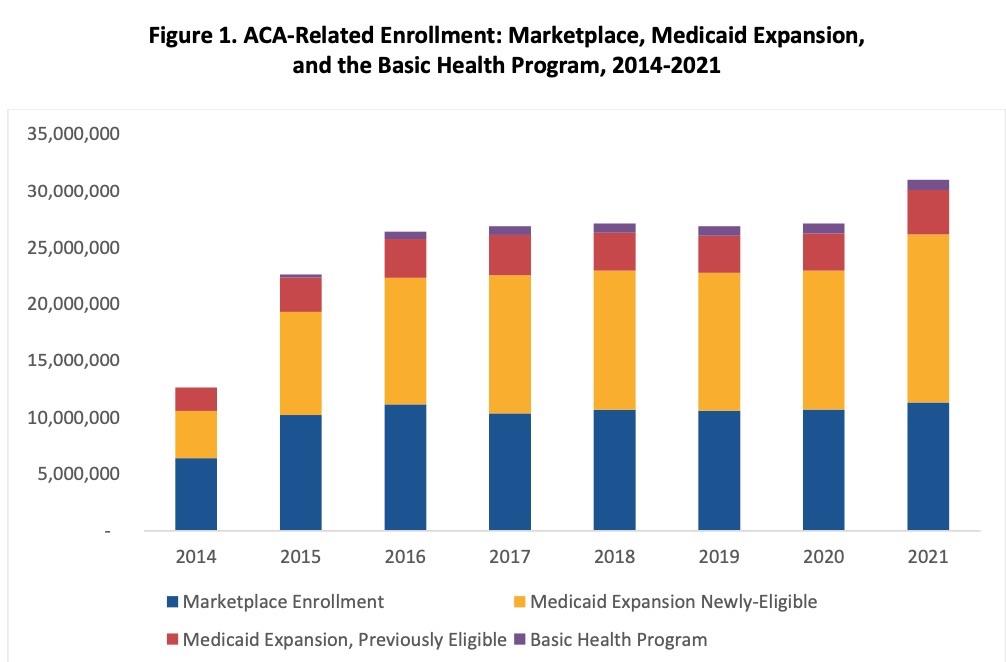 * Marketplace effectuated enrollment figures for 2014 and 2015 are as of 12/31/2014 and 3/31/2015 respectively, versus February coverage as of 3/15 for 2016-2021. Marketplace enrollment data for 2014-2015 are lower quality due to the manual payment processing system in place for those years. 2014 and 2015 Marketplace enrollment figures are published here. February 2016-2021 data are from the CCIIO Enrollment Payment System and beginning in 2017 have been published in the Effectuated Enrollment Snapshot for the respective year.

**BHP programs did not start until 2015. BHP enrollment data are based on average monthly (for Minnesota) or quarterly (for New York) projected enrollment submitted by the states to CMS in advance of the applicable quarter and are rounded to the nearest thousand. BHP enrollment data for 2021 is through May 2021.

Table 2 presents enrollment estimates by state for Marketplace and Medicaid coverage, plus uninsured rates before and after the ACA. Figure 2 illustrates the percentage change in the uninsured rate from 2013-2019 for each state. Nationally, the uninsured rate has decreased 5.3 percentage points (from 14.5% to 9.2%) since the ACA coverage provisions were implemented in 2014.

The ACA is a wide-ranging law, and these estimates are a conservative estimate of the law’s impact on health insurance coverage for several reasons. First, the total does not include the impact of the COVID Special Enrollment Period in 2021. Second, the total does not include the provision of the ACA that took effect in 2010 allowing young adults to remain on their parents’ plans until age 26, which previous research estimated led to more than 2 million young adults gaining insurance.

Finally, the streamlining of Medicaid applications, enhanced outreach, and expanded eligibility led to increased enrollment even among children and parents who were eligible for Medicaid through traditional pre-expansion pathways, a phenomenon referred to as the “welcome mat” effect. Thus, 31 million likely underestimates the total effect of the ACA on coverage. 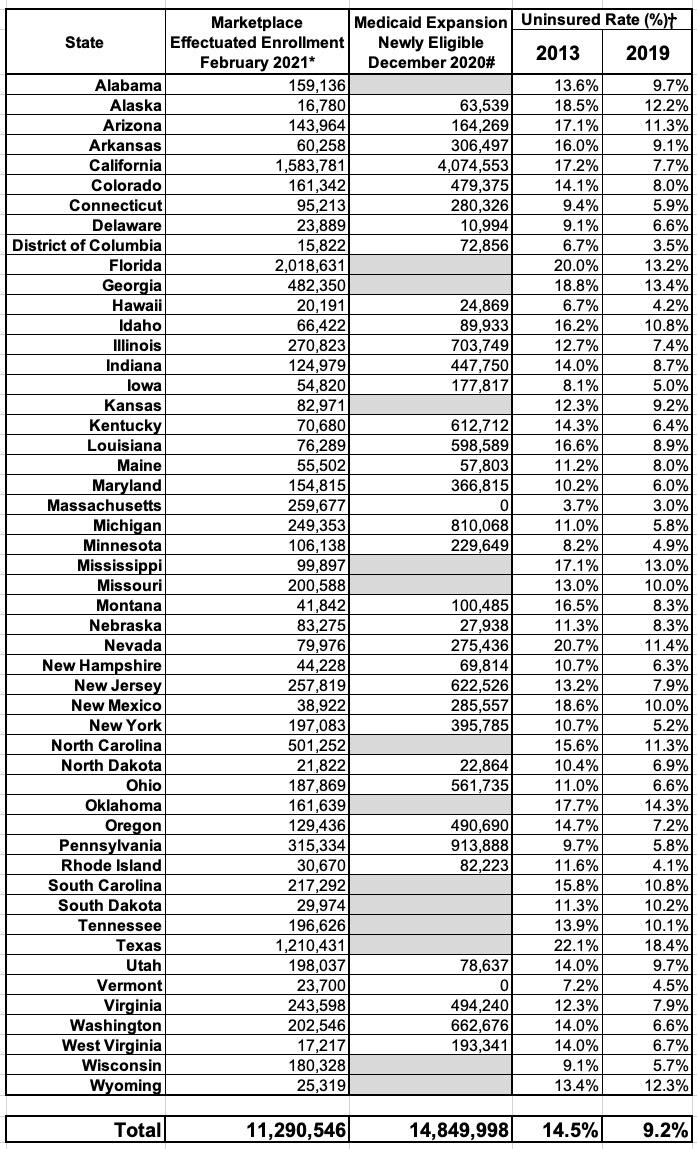