A few days ago, the Centers for Medicare & Medicaid Services (CMS) posted an updated report on the number of Americans who have selected Qualified Health Plans (QHPs) through HealthCare.Gov, which hosts ACA enrollment for 36 states during the ongoing COVID Special Enrollment Period (SEP) which began on February 15th and is set to continue through August 15th in most states.

In addition to the 940,000 QHPs via the federal exchange (HC.gov) from 2/15 through 4/30, I've compiled officlal SEP enrollment numbers for several of the states which operate their own ACA exchanges as well:

Of course, this only includes part of the 75 day period from 2/15 - 4/30 (a few states run longer, most are far shorter), and other states are still missing entirely, including New York, New Jersey and The Big One: California.

However, extrapolating from the daily average of the data I do have strongly suggests that around 19,400 additional people have selected QHPs per day nationally, for total SEP enrollment since 2/15 of close to 1.5 million (for California...which comprises by far the largest chunk of the missing data...I'm assuming they've been averaging around 2.4x as many SEP enrollments per day as they did for the same time period in 2019, which is the average for the other Medicaid expansion states on HealthCare.Gov).

(It's also worth noting that HC.gov states only accounted for around 68.7% of all 2021 Open Enrollment Period enrollees, so even a simple extrapolation based on that alone would give you 1.37 million nationally.)

It's important to keep in mind, as always, that something like 5,800 people typically enroll via Special Enrollment Periods nationally under normal circumstances anyway, such as losing employer coverage, getting married/divorced, giving birth, adopting a child, moving to a different state and so on, so of those ~1.5M SEPs, perhaps 435,000 of them would have enrolled prior to the COVID pandemic during the same time period.

That still means that over 1 million people have likely enrolled so far this spring who otherwise wouldn't have done so.

Assuming my 19.4K/day average is accurate, and assuming it continues at that pace, that would mean an additional 600K SEP enrollees by the end of May, or around 2.1 million total. However, I strongly suspect that the pace has already dropped off in most states; Idaho ended their COVID SEP on 4/30 and Vermont ends theirs on 5/15, for instance (exceptions will likely include California, Connecticut and Washingngton, which only started offering their expanded AmRescuePlan subsidies more recently).

I'd then expect another enrollment spike starting in mid-July, which is when the AmRescuePlan's Unemployment Benefits subsidy modifier goes into effect in most states...except that we'll already be over halfway through the year by that point, which will likely limit the impact of this to some degree.

Remember: The COVID SEP is ongoing through August 15th in most states: 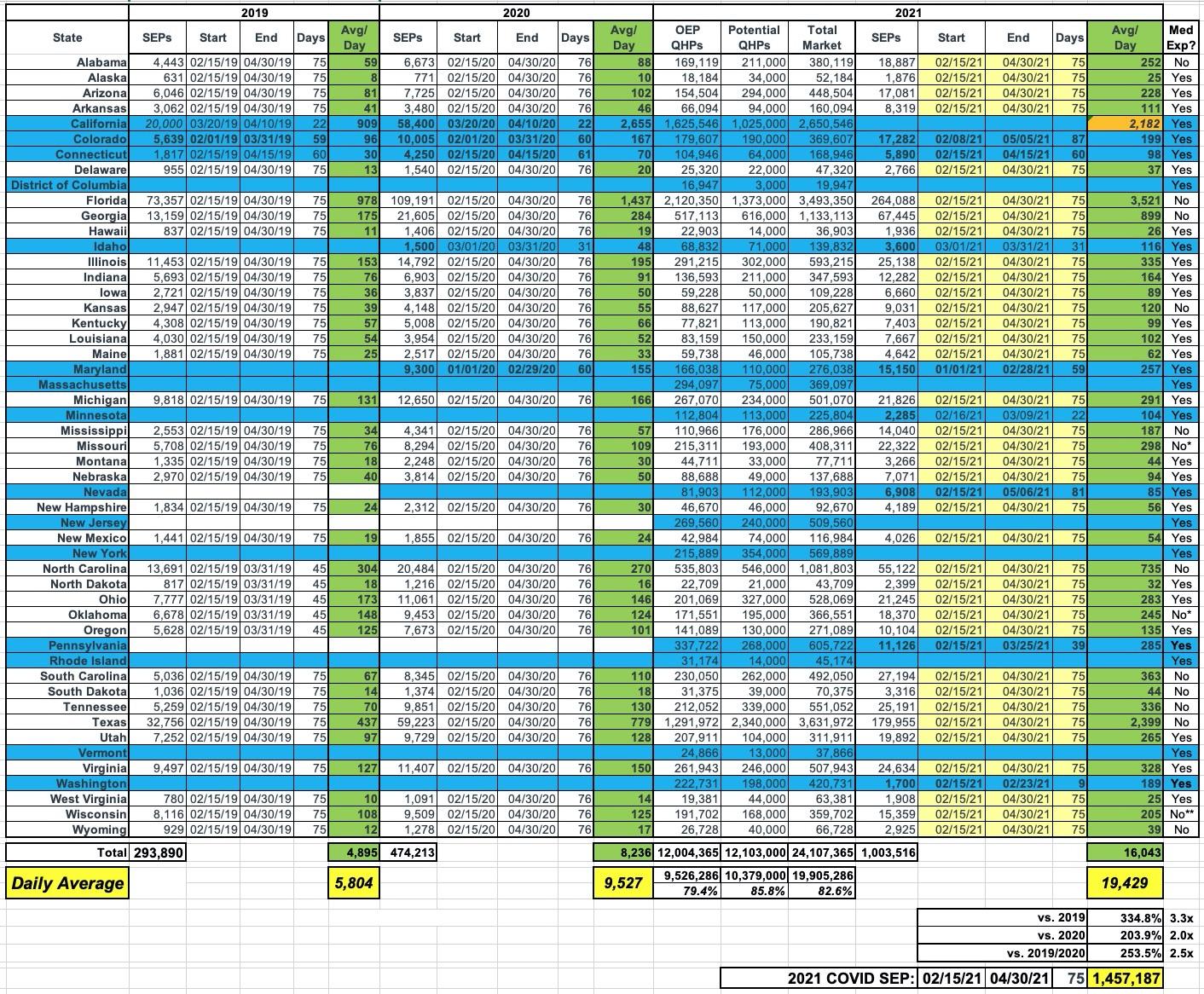 UPDATE 5/11/21: This morning President Biden formally announced that SEP enrollments via HealthCare.Gov alone have broken 1.0 million. This is hardly surprising given that it was 940,000 as of 4/30 (if the 12.5K/day pace kept up for another 10 days, it would put the HC.gov total at more like 1.065 million), but it's still an important milestone.

If you assume the 19.4K/day average nationally has also kept up, the national total would be at around 1.64 million as of yesterday, but again, it's likely slowed down somewhat since the end of April.