Covered California Opens the Doors for Millions of Californians to Benefit From Lower Health Care Premiums, Save Money and Stimulate the Economy Through the American Rescue Plan

SACRAMENTO, Calif. — Covered California launched a new special-enrollment period on Monday to allow Californians to benefit from lower health insurance premiums available through the American Rescue Plan. The new law can help an estimated 2.5 million Californians, including the uninsured and those who enrolled directly through a health insurance carrier, by providing additional financial help to lower the cost of their coverage.

“The new and expanded financial help provided by the American Rescue Plan will help more Californians get covered and stay covered by lowering premiums, and for many, putting WOOmoney back into their pockets,” said Peter V. Lee, executive director of Covered California. “The new financial help is only available through Covered California. You owe it to yourself to check if you benefit — and the sooner you sign up, the more you can save.”

Covered California estimates the plan can help Californians — particularly low- and middle-income consumers who have been hit hardest by the pandemic and recession — through $3 billion in new and expanded federal subsidies (see Table 1: Californians Eligible for Assistance From the American Rescue Plan). The new money will strengthen the state’s economy by helping eligible consumers save thousands of dollars between now and the end of 2022, when the benefits are currently set to expire.

“For some Californians, it means hundreds or even thousands of dollars back in their pockets to help them afford their housing, keep their business running, or assist with daily living expenses,” Lee said. “For others, it means they will finally be able to afford health care coverage and get the protection and peace of mind they need as we recover from this pandemic and recession.”

Table 1: Californians Eligible for Assistance From the American Rescue Plan[i] 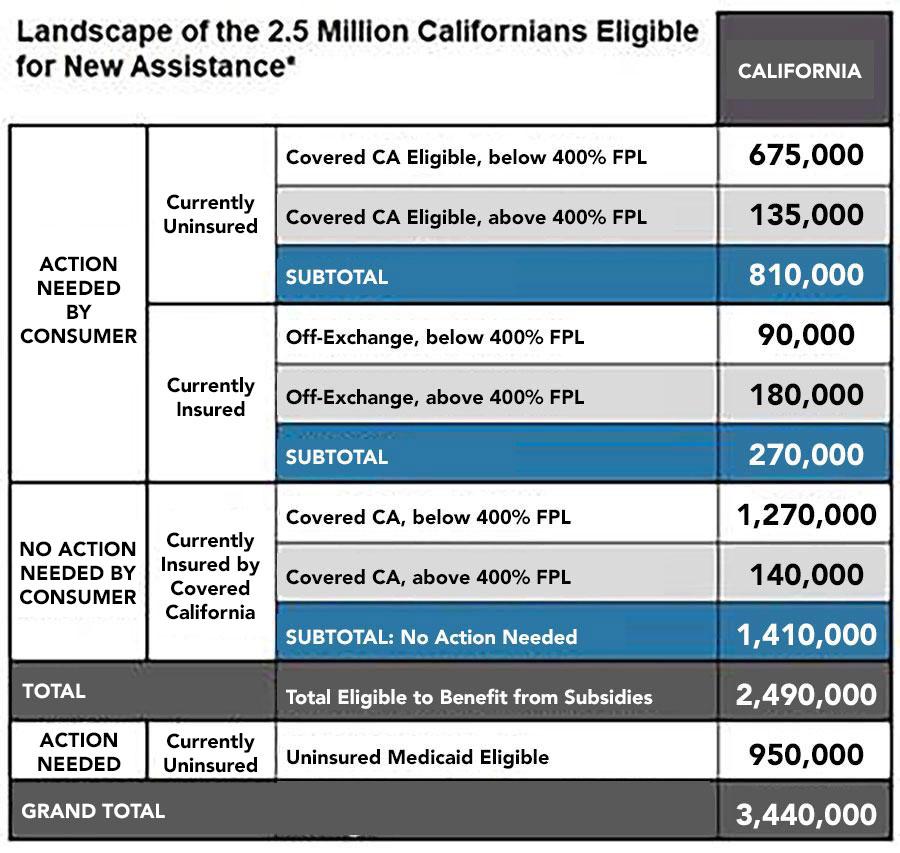 Joseph Newhouse, a national expert on economics and consumer spending and Professor of Health Policy and Management at Harvard University, said the new subsidies havethe potential to change the lives of people across the state.

“Whether you live in a big city or in a rural area, these subsidies will provide significant financial relief for people who sign up for health care coverage through Covered California,” Newhouse said. “These subsidies are big, they matter, and they can have a dramatic impact on people’s lives — if they take action.”

Who will benefit from the American Rescue Plan?

The American Rescue Plan lowers health care premium costs for people who get coverage through Covered California by providing new and expanded subsidies to make health insurance more affordable than ever before. The following types of consumers stand to benefit:

The uninsured: New data shows that an estimated 810,000 Californians are uninsured and eligible for health insurance coverage through Covered California. Under the American Rescue Plan, most of them would be able to get a high-quality plan from a trusted name-brand company for as little as $1 per month, or a plan that offers richer benefits for less than $100 per month.

Figure 1: Health Care Premiums are Lower Than Ever for the Uninsured[ii]

Figure 2: Off-Exchange Consumers Save by Switching to Covered California

“The American Rescue Plan provides the most significant consumer cost savings since the implementation of the Affordable Care Act, but in order for many Californians to make the most of that savings, they need to act now,” Lee said. “Do not miss out: the sooner you sign up, the sooner you can start saving and be covered.”

In addition, the American Rescue Plan will provide marketplace coverage to anyone who received unemployment insurance benefits in 2021. Under the new law, anyone who has received unemployment insurance benefits in 2021 will be eligible for the richest possible coverage from brand-name health plans, which will cost only $1 per month — regardless of their actual total income in 2021. 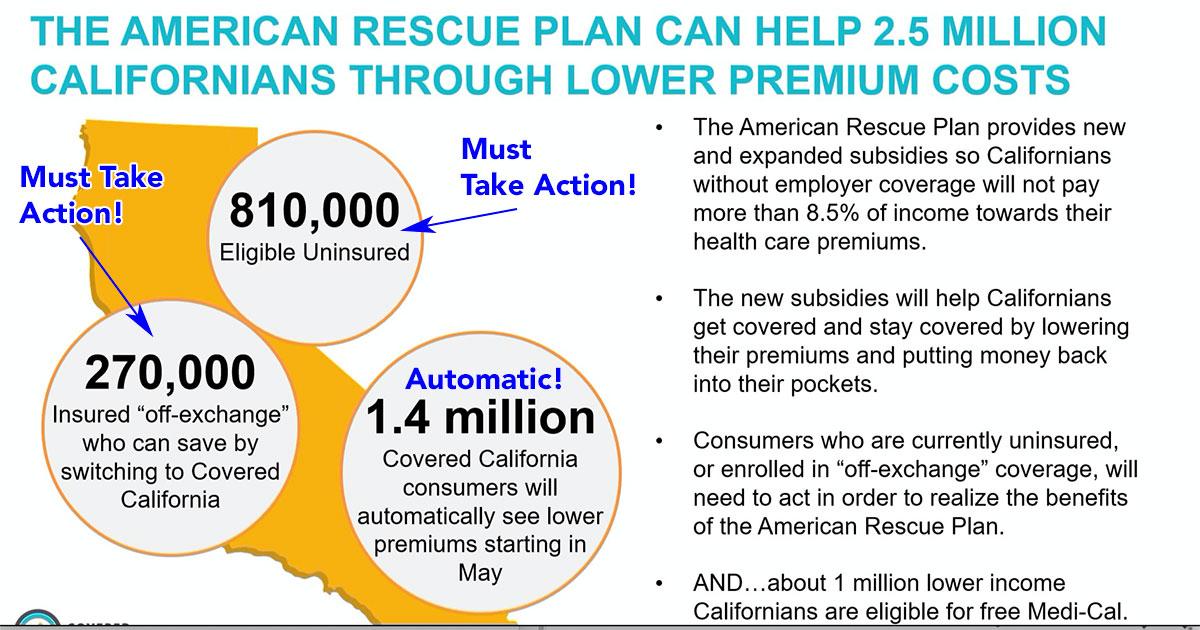 Covered California is currently working to implement this benefit in its enrollment and consumer cost-comparison systems. While those changes are expected to be implemented in July or August, consumers who are enrolled or sign up before that time will receive the lower premium retroactive to when their coverage commenced. An estimated 10 percent of current Covered California enrollees would be eligible for this benefit, further reducing their costs and putting money back into their pockets. These individuals will see premium reductions in May based on the basic changes under the American Rescue Plan, and additional savings when these changes are implemented this summer.

Covered California is supporting the new special-enrollment period by taking the unprecedented action of treating the months of April through June as if it were its annual open-enrollment period. This includes launching a new ad campaign that starts today (see examples at right). The exchange plans to spend up to $30 million on television, radio and print ads throughout the state through June. The campaign will reach every community, with an emphasis on Hispanic, Asian, and African American media outlets, which represent the groups hit hardest by the pandemic and recession.

It's important to note that Covered CA's FULL Special Enrollment Period will be open for anyone through the end of June. From July through the end of the year, it sounds like they may make some changes to eligibility...that was a little vague in the webinar I just watched. My guess is they'd stop letting current on-exchange enrollees switch plans at that point, not that I can imagine there'd be too many people doing that for 2021 at that point.

It was noted during the webinar that usually, around 10% of those who leave CoveredCA become completely uninsured; last year it increased to 25%, so that's another group of people who are likely to come back into the fold.

“We know that California’s low-income communities — including Latino, Black and Pacific Islander — are the backbone of our state’s essential workforce,” said Jeffrey Reynoso, executive director of the Latino Coalition for a Healthy California. “They have suffered the most during the pandemic and recession, and this new law will make health care coverage more affordable and help them save money in the process.”

Click here to see the television ad in English.

Click here to see the television ad in Spanish.

The new ads will encourage consumers to visit CoveredCA.com to see how much they can save thanks to the new money that is now available.

In addition, the campaign will include a robust digital and social media investment (see example below) as well as educational videos, emails, direct mail and text messaging to reach Californians who have been insured previously or have inquired about health insurance.

“We stand ready to do everything we can to make the American Rescue Plan successful for as many Californians as possible,” Lee said. “Time is of the essence, because every month that goes by is a month that someone could be covered or could be saving hundreds of dollars on their health insurance.”

Consumers Can Find Out in Minutes How Much They Can Save

Research has shown that for most consumers, the reason they do not have insurance coverage is that they do not believe they can afford it. Many may have checked their costs months or years ago — they need to check again to see how affordable coverage can be. On CoveredCA.com, consumers can easily see exactly how they can benefit from the new law. Consumers just need to enter their ZIP code, household income and the ages of the people in the household to see how low their premiums can be and the health insurance options in their area.

Covered California is an independent part of the state government whose job is to make the health insurance marketplace work for California’s consumers. It is overseen by a five-member board appointed by the governor and the legislature. For more information about Covered California, please visit www.CoveredCA.com.