A couple of weeks ago, I used the limited COVID Special Enrollment Period (SEP) data I had for HealthCare.Gov from the last two weeks of February, plus some limited SEP data from a handful of state-based ACA exchanges, to extrapolate out a rough estimate of how many new Qualified Health Plan (QHP) selections may have happened nationally.

At the time, I estimated that perhaps 18,500 people were enrolling per day nationally the final two weeks of February, and that IF that pace remained the same throughout the entire month of March, it would amount to upwards of 832,000 new people enrolling by the end of March (666,000 via HealthCare.Gov, plus another 166,000 via the 15 state-based exchanges).

It's important to note that this wasn't a hard estimate--I was pretty sure that the actual enrollment pace would slow down somewhat after the inital surge, at least until expanded subsidies via the American Rescue Plan (ARP) were officially available in most states, which didn't happen until April 1st.

Yesterday, the actual SEP enrollment data for HealthCare.Gov was released, and as I had cautioned, the actual tally through March 31st came in around 20% lower than that hypothetical figure: 528,005 QHPs via the federal exchange, or 11,733/day.

As for the other 14 states + DC, I still only have very limited data, but as far as I can figure, they've been adding something like another 4,000 per day, for a national average of roughly 15,800 QHP selections per day. If so, that'd come to around 710,000 nationally as of March 31st.

It'll be fascinating to compare the "Pre-ARP" and "Post-ARP" averages. This won't be a perfect comparison, because not every state brought the expanded/enhanced subsidies online on April 1st. All 36 HC.gov states are up today, as are Idaho, Maryland, Minnesota, and New York...but California won't be doing so until Monday the 12th, Colorado won't be live until the 15th and Washington State won't be live until May 6th. I'm not sure about some of the remaining states.

So what would it take to increase ACA exchange enrollment by 1.7 million people, as projected by the Congressional Budget Office? Well, it's important to keep in mind that they projected that figure for 2022, not 2021:

CBO and JCT estimate that enacting section 9661 would affect health insurance coverage to a much more limited extent in 2021 and 2023. The effect on health insurance coverage in 2021 would be constrained because the enhanced subsidy structure would take effect midway through the plan year. For 2023, CBO and JCT anticipate that some of the estimated increase in enrollment would persist beyond 2022, when the enhanced subsidy structure prescribed by this legislation would expire, and would gradually return to current law levels by 2024.

Having said that, increasing exchange enrollment by 1.7 million is still feasible even this year:

All of this is pure speculation, of course. I have no idea how much enrollment has ramped up since the end of March, but it'll be fascinating to find out... 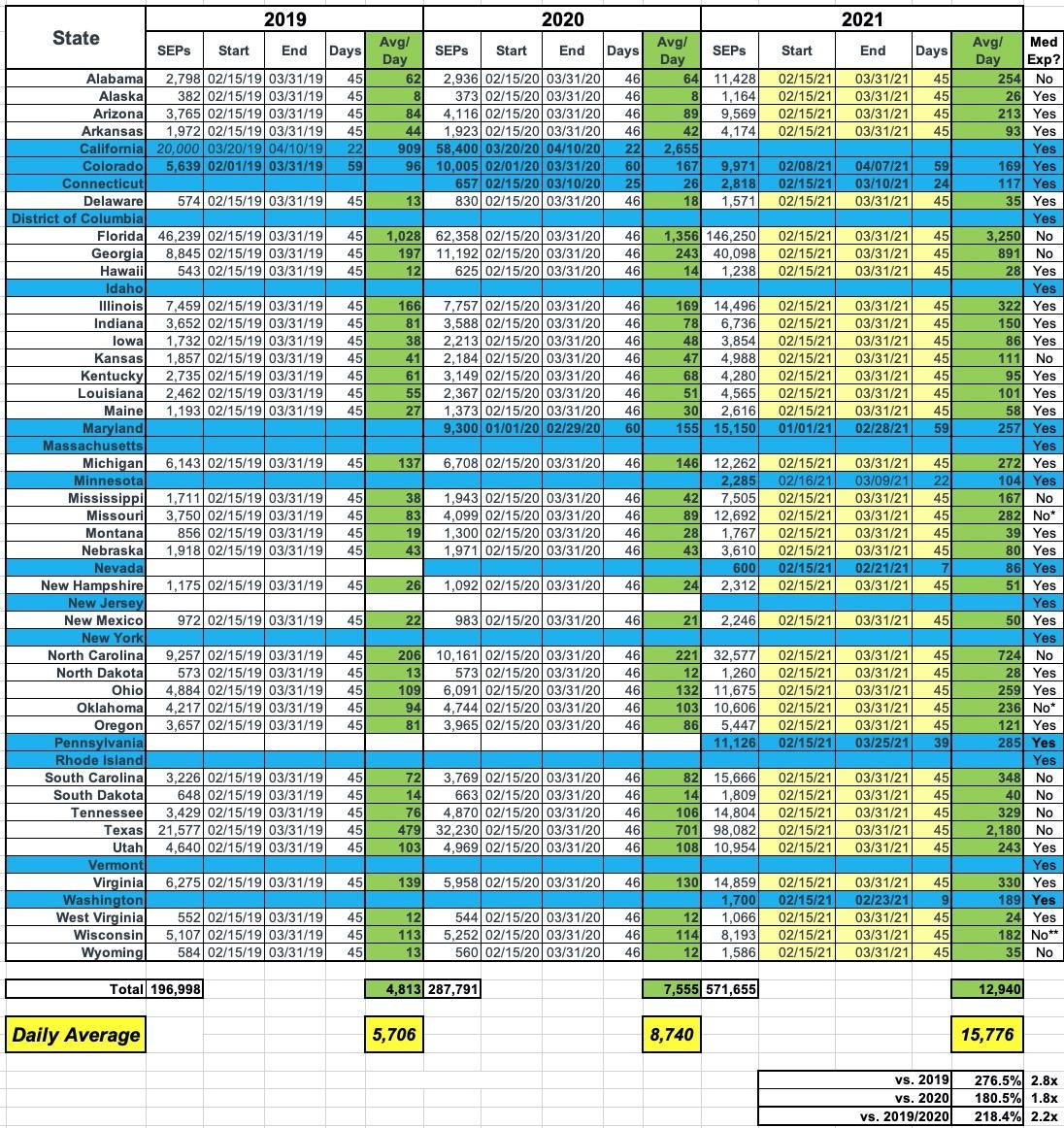