Update: Time to check in on how the #COVID SEP is going...

A lot has happened since I last ran some back-of-the-envelope math to get a feel for how many Americans are enrolling in ACA exchange policies durign the 2021 COVID Enrollment Period, which started in most states on February 15th.

At the time, HealthCare.Gov had reported 206,000 Qualified Health Plan (QHP) selections as of February 28th. I also had some partial COVID SEP data from a handful of the state-based ACA exchanges, as of various dates. I had 225,000 QHPs confirmed nationally.

At the time, I concluded that based on the enrollment pace of the first few weeks...

As noted above, Medicaid expansion states have only increased average SEP enrollment by around 2/3 as much as Non-expansion states. Since all 15 state-based exchanges have expanded Medicaid, this suggests that the 206K via HC.gov probably represents more like 80% of the total, meaning perhaps 258,000 nationally (~168,000 more than average).

If so and if the pace continued at that rate, that would mean something like 1.71 million by 5/15, or 1.1 million more than average.

The table below breaks out every state into the known daily QHP selection average, including data from 2019 and 2020 for comparison, where known. Based on this, the national enrollment pace appears to have averaged around 18,500 people per day in the early weeks, or roughly 2.6x as many SEP enrollees as you'd typically see in the pre-COVID era.

Assuming that pace has continued since the end of February, we could be up to as many as 684,000 QHPs nationally as of March 23rd (around ~550,000 via HC.gov, plus another ~134K via the various state-based exchanges).

Of course, there's no way of knowing whether that initial pace has continued. My guess is that it dropped off for the first week or so of March...but what happend after the American Rescue Plan was passed and signed into law by President Biden, with the substantially expanded/upgraded subsidies?

Normally I'd have expected a huge surge of enrollees, especially among those earning more than 400% of the Federal Poverty Line...but the actual subsidies won't be in place until April 1st on HealthCare.Gov, on April 12th in California, and at unknown times in some other states...so it's also likely that a lot of people are holding off on signing up until after the websites have been retooled and the new subsidies are officially live. 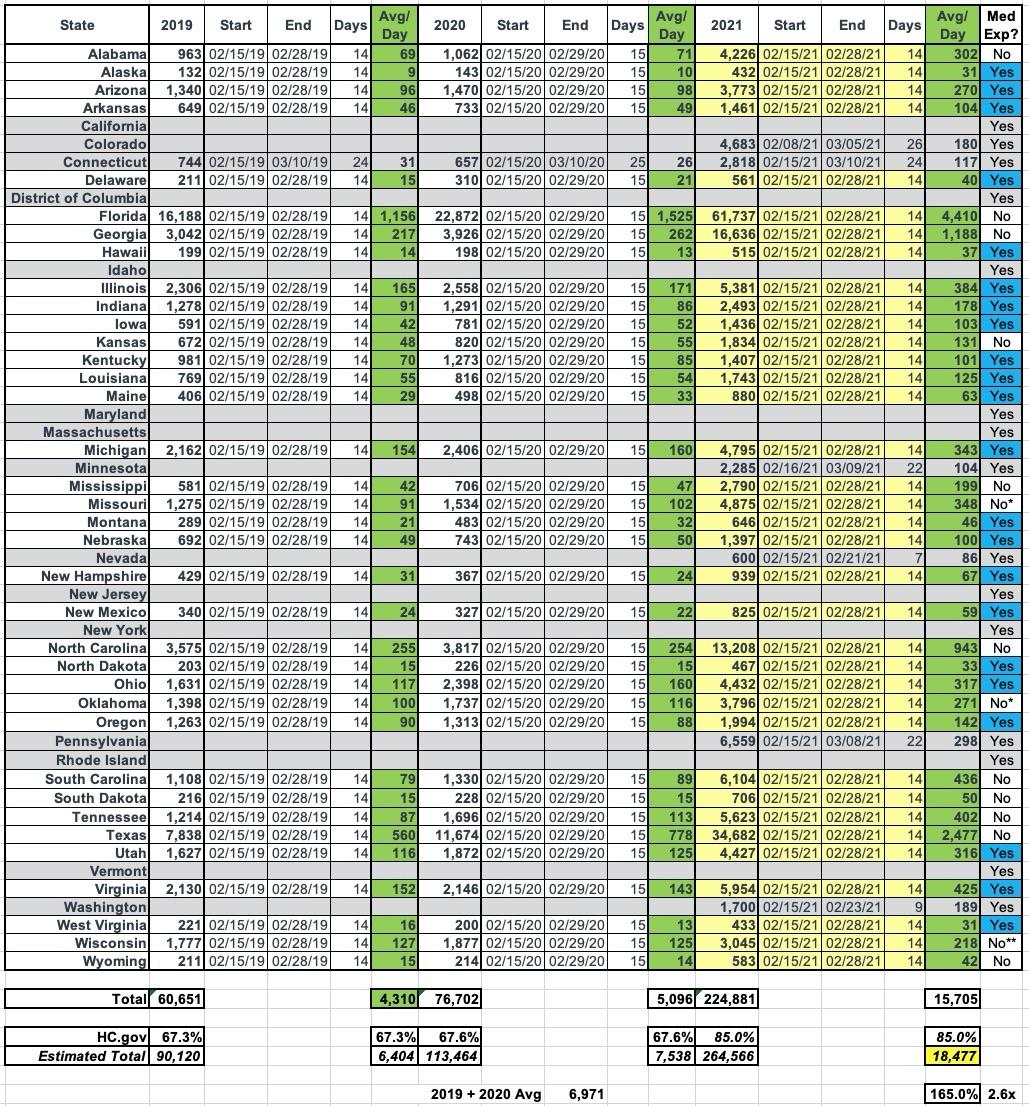