EVERYBODY PANIC! CELTIC PULLING OUT OF 6 STATES!! Oh, wait a minute...

When UnitedHealthcare announced last month that they were making good on their threat last fall to pull out of the individual market in over two dozen states next year, it caused shockwaves across the health insurance industry. It is an important development, as around 800,000 people will be impacted.

When Humana announced last week that they plan on pulling out of the individual market in at least 5 states next year, it was interesting and a bit of a bummer, but not nearly as earthshattering, because only about 25,000 people will have to shop around and find a new carrier.

Today, it is my duty to announce that Celtic insurance has also decided to pull out of the entire individual insurance market (both on and off-exchange) across at least 6 states, including:

You'd expect this to be cause for alarm...until you read the actual exit notices. For instance, here's the one sent to the North Carolina insurance commissioner: 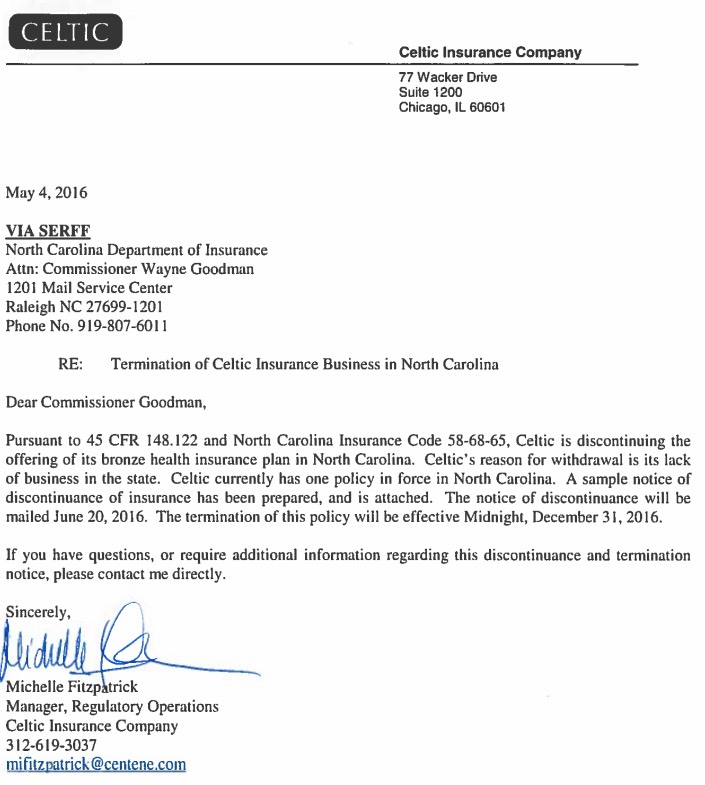 Yep, that's right one policy in place. That's it. One person (or potentially a single family...let's say up to 4 people?) is enrolled in a single off-exchange Bronze policy in the entire state of North Carolina.

Furthermore, it turns out that Celtic...

...provides a variety of health insurance products to more than 30,000 policyholders nationwide. The Centene subsidiary's products include Celtic Basic Health Plan, a low-cost plan, and CeltiCare Preferred, which provides comprehensive coverage for families, kids, and adults. It also offers a health savings account plan known as CelticSaver HSA. Celtic is licensed in all states except New York and provides coverage in most of them.

Yep. Again, assuming "policyholders" refers to "households", that means that Celtic only has perhaps 90,000 enrollees nationally, and it's a subsidiary of Centene anyway...and Centene is actually doing just fine on the ACA exchanges, making "higher end" profit margins on 683,000 enrollees as of March 31st.

Sometimes the story is much, much less significant than the headline makes it out to be. Keep that in mind for...well, everything.