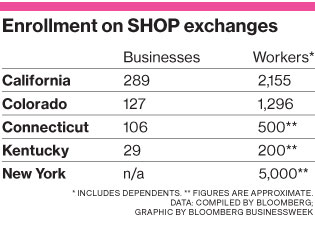 It looks like my previous source for Colorado's Medicaid Expansion tally (114,192) was mistaking applications for actual enrollments. This number has been reduced by 27,760 as of 12/31/13.

In addition, in a previous entry I mentioned a study by the Commonwealth Fund from earlier this year which claimed that the correct number of "Under 26'ers" on their parent's plans thanks to the ACA is actually closer to 7.8 million instead of the 3.1 million figure that I've been using. However, I've been reluctant to switch to that figure since a) it's much larger and b) the HHS itself is only using the 3.1 million number. Today I found out why this is the case; contributor jdld provided a link to this report on the HHS website which states:

Colorado has increased their private total enrollment from 42,771 on Christmas Eve to 52,773 as of New Year's Eve.

Not too much to add here. This is significant not just because of the hard number, which is impressive and pushes CO ahead of their CBO enrollment schedule (92K by 3/31/14; they're 57% of the way there while the period is only 50.5% over), but because of the implication--the state extended their January enrollment deadline to 12/27, and managed to increase their tally by more than 23% in that last week. If this trend held true for other late-enrollment states, it could mean some nice last-minute mini-spikes.