As I noted the other day, of the roughly 800,000 gap between the actual final number (11.7 million) and my personal projection (12.5 million), a whopping 56% of the difference could be found in just 2 states:

Hawaii appears to be a simple case of the HI exchange issuing confusing-as-hell enrollment reports. They had a tendency to use cumulative enrollment figures, which made me suspicious when they supposedly had broken 23,000 this year (vs. last year's 8,600). However, according to the reporter who broke the story:

"Exec. director says there are currently 23k who selected plans for 2015."

That's pretty specific and direct, and came after she and I had a Twitter conversation about the confusion and she had gone back to double-check.

Anyway, in the end Hawaii came in at pretty much exactly what I had originally pegged them at (13K).

So, that leaves Colorado and Idaho. The other day I had a lot of confusion about Colorado's latest report, which gave a top-line grand total of about 154K, but mixed in SHOP enrollments and had some confusing language as well. Fortunately, they just responded to my clarification request over at the Connect for Health Colorado Facebook Page: 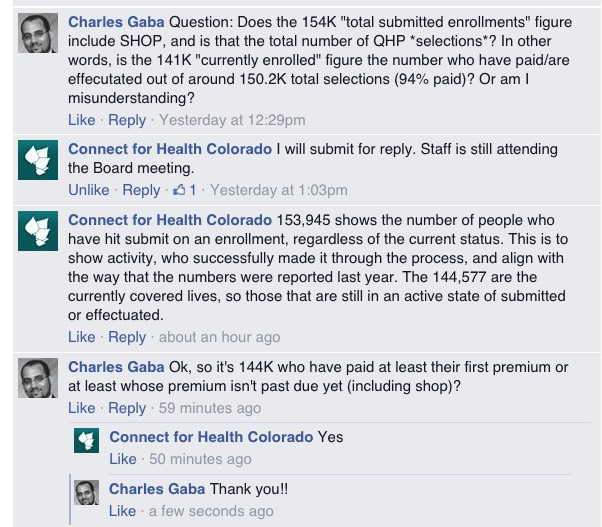 OK, so the first thing you need to do is subtract out 3,716 SHOP enrollments from both numbers. That leaves you with 150,229 total QHP selections (which is what I thought it was!), of which 141,639 have actually paid or at least haven't gone past-due on their payment deadline. This is very similar to what Rhode Island has been doing with their enrollmente reports (except that they were more clear about it). This amounts to roughly a 92-94% payment rate overall, which is excellent...but it also means that their official "plan selected" number is still about 8,600 fewer than I thought.

Idaho, again, is unique. They're the only state to have operated on HC.gov last year before moving to their own exchange this year.

They're the only state exchange set up by a completely Republican-run state (the GOP has full control over Nevada now, but didn't the past couple of years when they set up their exchange...and they've moved the opposite way, over to HC.gov this year anyway).

With all of that, Your Health Idaho seemed to have a pretty smooth, successful launch and run this year. They didn't issue updates often, but seemed to be doing pretty well:

Remember, that's including the big mid-February deadline surge, as well as the "Waiting in Line" extension period. Even if you assume every one of those 6,512 came in by the 2/15 deadline, that'd still only be 224/day.

So...what the heck happened in Idaho over the final month (+ one week)? No clue, but that accounts for another 23K of the "shortfall" from my projection.

Anyway, they still managed to garner a 28% increase over their 2014 total, which isn't bad, all things considered.

UPDATE: Out of curiousity, I've plugged in the "3rd month vs. 1st+2nd month" numbers for every state, and sure enough, aside from DC (which is sort of a special case anyway), Idaho is definitely the odd man out when it comes to 3rd Month performance. Every other state ramped up their numbers in the final month (final 5 weeks, really) by at least 12%.

Of course, it's possible that I'm looking at this the wrong way--perhaps the "issue" isn't that Idaho stalled out in the final lap, it might be that they overperformed in the earlier portion of the enrollment period, making the 3rd month seem weak in comparison.

Anyway, just thought this was interesting.