Louise Norris has provided some valuable information about 2016 individual market rate change requests in her home state of Colorado:

For 2015, Colorado HealthOP cut premiums aggressively, and ended up with the lowest-cost plans in eight of the state’s nine rating areas.  Unsurprisingly, that resulted in the CO-OP garnering the highest market share in the exchange during the 2015 open enrollment period, with nearly 40% of exchange enrollees selecting Colorado HealthOP coverage (among our own clients, Colorado HealthOP was even more popular, including among those who selected off-exchange coverage).

...In 2015, Colorado HealthOP got almost 40% of the exchange’s market share, and Kaiser was a close second with 35%; the two non-profits accounted for three-quarters of all the private plan enrollees in Connect for Health Colorado this year.

...Carriers in the individual market in Colorado have proposed rate changes that range from a 5.1% decrease (Cigna) to a 34% increase (Rocky Mountain HMO).  For the two carriers that insure the bulk of the exchange’s enrollees, Colorado HealthOP has proposed an average rate increase of 21.6%, and Kaiser has proposed an average rate increase of 2%.  Assuming the claims data justifies those rate changes, I think it’s safe to say that we’ll probably see another shake-up of the health insurance market share here in Colorado next year. 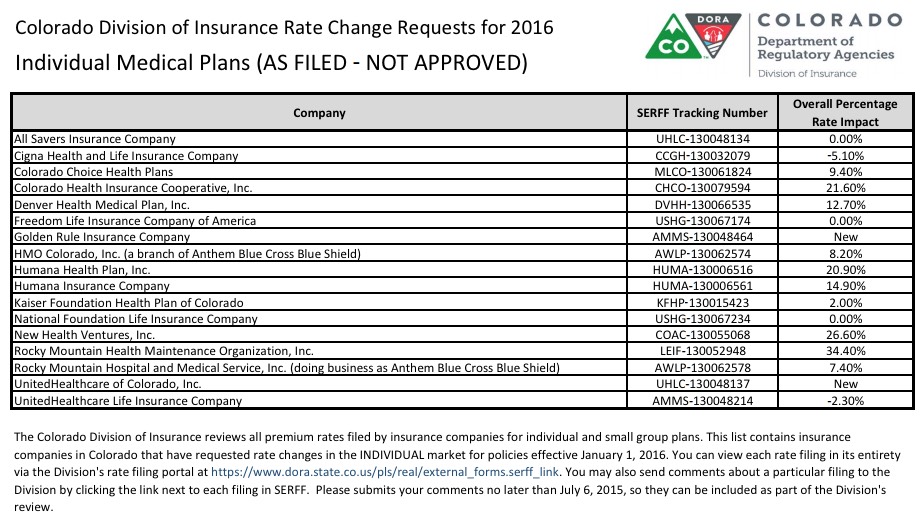 Important caveats: First, I don't know the market share of the other 15 companies listed (well, 13 of them anyway...2 are brand-new to the exchange); they make up a combined 25% of the total. The worst-case scenario would be if all 25% belonged to Rocky Mountain HMO (34.4% increase), which would mean something like this:

...which would mean a weighted average 17.9% increase request.

The best case scenario (if Cigna has the whole 25%) would be something like:

...which would mean a weighted average 8.1% increase request.

All I know for sure is that the CO-OP + Kaiser combined weighted average--making up 75% of the exchange market--is around 9.3%.

Second, the 40% / 35% shares for the CO-OP and Kaiser respectively are a bit different for off-exchange policies:

In off-exchange business, Kaiser picked up 32,000 more customers while the HealthOP netted another 25,990 members. In financial disclosures filed on Monday, the HealthOP reported $23 million in losses for 2014.

Unfortunately, this isn't very useful without knowing what the total off-exchange market size is in Colorado, so I'll leave it at that.

UPDATE: I discussed the off-exchange situation with Louise, who's the voice behind the Colorado Health Insurance Insider blog; our best mutual estimate of the ACA-compliant off-exchange market in CO is roughly 80,000 or so, which would mean a total ACA-compliant risk pool of roughly 205,000. Assuming that's about right, then the total market share for the CO-OP and Kaiser would be roughly 37% each (74% combined), and the on+off weighted average would be slightly lower, around 8.7% or so.

UPDATE 7/9/15: Thanks to Louise for this link which provides a bit more data, including the exchange-only market share for Rocky Mountain HMO of 15%:

Rocky Mountain Health Plans and the HealthOP are nonprofit health plans that enticed large numbers of customers through Colorado’s health exchange, Connect for Health Colorado. The HealthOP edged out Kaiser Permanente for sign-ups for 2015 through the exchange, grabbing about 40 percent of the market compared to about 35 percent for Kaiser and 15 percent for Rocky Mountain Health Plans. Kaiser is the outlier in rates for 2016, holding prices relatively flat with proposed increases of just 2 percent.

Later in the article:

As fluctuations in the market continue, Rocky’s membership has declined from about 30,000 in 2014 to 26,000 this year. It may decline further since Rocky is choosing to drop some of its plans in the Denver area for next year.

This changes the calculations a bit. Again, Assuming a similar off-exchange market share for Rocky Mountain (15%), that should mean something like:

Again, this is a) still only partly weighted (the other 13.3% is unknown); b) makes certain assumptions about the total individual market size; and c) these are still requests only, not final rates and could change further before 2016.

The other big factor for next year?

There will also be a flood of enrollees signing up for ACA-compliant coverage for the first time during the 2016 open enrollment period, since Colorado is ending grandmothered (transitional) plans at the end of this year.  About 75,000 people who have kept pre-2014 individual plans until now will have to enroll in ACA-compliant plans instead, significantly increasing the size of the pie for carriers vying for new business in Colorado’s individual market.

And the lesson, as always?

Don’t forget to shop around during open enrollment!