This just in from Covered California:

SACRAMENTO, Calif. — Covered California announced Monday that it has enrolled a record 1.6 million people, as thousands of consumers sign up for coverage due to the lower premiums provided by the American Rescue Plan. New data shows that over 139,000 people have signed up for a health plan through Covered California since the new and expanded financial help from the new law became available on April 12. The announcement comes just days after the U.S. Supreme Court rejected the latest challenge to the Patient Protection and Affordable Care Act.

“With the Supreme Court again ruling that the Affordable Care Act is the law of the land, and with the American Rescue Plan lowering premiums for thousands of Californians, it is easier than ever to get covered and stay covered,” said Peter V. Lee, executive director of Covered California. “The next deadline is coming up, and Californians who sign up by the end of the month will begin benefiting from their more affordable coverage on July 1.”

The record enrollment is being driven by the new financial help now available through the American Rescue Plan, which became available on April 12. Since then, 139,100 people have newly signed up, which is an increase of nearly 63,000 people in the past four weeks alone. Overall, a total of 246,640 people signed up for coverage between the end of open enrollment and June 16 (see Table 1: Consumer Plan Selections During Special Enrollment).

I've expanded on the table in the press release to further break enrollment out on a per-day basis for comparison. SEP enrollment jumped by over 32% per day after the expanded AmRescuePlan subsidies went live.

This also increases confirmed 2021 SEP enrollment nationally by over 170,000 people, bringing the confirmed total up to 1,598,507...very close to the 1.65 million estimate I had as of the end of May. With the additional 3 weeks of June and missing SEP data from a bunch of other states, it's likely actually over 1.7 million as of today.

My colleague Andrew Sprung also reminded me of this report from CoveredCA from last year, when they also had a COVID Special Enrollment Period which ran from 3/20 - 8/31. The report also notes the number of normal (pre-COVID) SEP enrollees. The dates don't quite match up, but we can look at 2019, 2020 and 2021 and then run a daily average to see how all three compare: 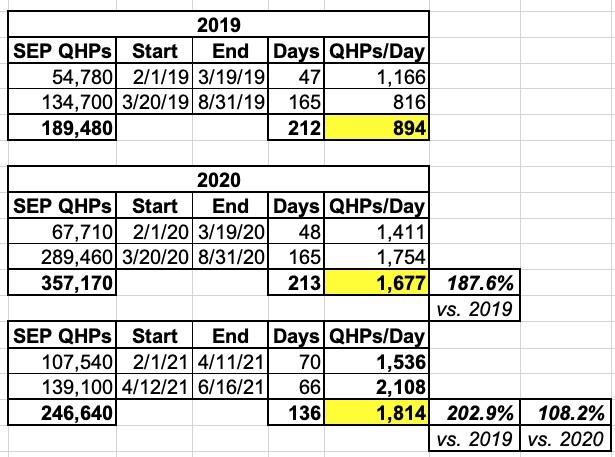 On the one hand, this may seem disappointing given the massive subsidy expansion this year, but there's several things to keep in mind:

Basically, the re-opened enrollment period plus the expanded ARP subsidies are effectively cancelling out most of the normal attrition in exchange enrollment that you normally see throughout the year.

The American Rescue Plan provides new and expanded financial help to people who receive their health insurance through an Affordable Care Act marketplace like Covered California. The law means that many middle-income Californians can now get more help than ever before, since it ensures that everyone eligible will pay no more than 8.5 percent of their household income on their health insurance premiums. The law also dramatically lowers the cost of insurance for lower-income Californians, with the latest data showing that nearly 700,000 people now have quality coverage through brand-name health plans for $1 per month. While Covered California’s special-enrollment period runs through the end of the year, consumers are encouraged to act now in order to start benefiting from the new law.

“The American Rescue Plan is making coverage more affordable than ever, and more and more Californians are getting high-quality coverage for just a dollar,” Lee said. “The sooner you sign up, the sooner you can start saving and be covered, because we do not want anyone to be uninsured or leave money on the table.”

Beyond all of the above numbers which are like manna to data geeks like myself, there's another important point to today's press release:

There are 207,000 Covered California consumers who are currently enrolled in the best coverage that the exchange offers, known as Silver 94 plans. Plans in this metal tier include low premiums, $5 copays to see a primary care provider, outpatient services that are not subject to a deductible, an annual deductible of $75 and other cost-sharing benefits that lower the cost of coverage and increase access to care.

A provision of the recently enacted American Rescue Plan, officially launched by Covered California today, enables hundreds of thousands of people who received unemployment insurance benefits in 2021 to also get this level of high-value coverage for as little as $1 per month.

“The help for those who received unemployment benefits is big and not tied to their income, but the potential of good deals is there for every Californian who needs health insurance,” Lee said. “If you’re uninsured you should check your options, because hundreds of thousands are qualifying for the best coverage we offer for as little as $1 per month, while others are seeing reductions of hundreds of dollars per month on the plan they’ve already chosen.”

Sheila from Indio is a Covered California enrollee who lost her job as a college professor during the pandemic. When she consulted with her insurance agent, Sheila discovered that she and her daughter now qualified for a Silver 94 plan, and their $221 monthly premium would be dropping to just $1 for the rest of 2021.

“We were so excited that’s even a thing. My first thought was, ‘I’m sure not me,’” Sheila told Covered California. “We spoke yesterday and heard that it would be me. I was floored; we were both astonished.”

This makes it sound like around 428,000 additional Californians are eligible for the $1/month plans due to their unemployment status. However, the actual number could be a couple hundred thousand higher, since the American Rescue Plan allows anyone who's received unemployment benefits at any point in 2021 to be eligible for the $1 "Secret Platinum" plans. In theory you could have been on unemployment for only the first week or two of January and you'd still be eligible.

I CANNOT STRESS HOW BIG OF A DEAL THIS IS FOR ANYONE WHO'S EITHER CURRENTLY ON UNEMPLOYMENT OR WHO WAS EARLIER THIS YEAR.

“This is a tremendous opportunity for those who lost their jobs to get a quality health insurance plan at a price that has never been lower,” Lee said. “Whether you or someone you know filed for unemployment this year, now is the time to check out your options and start saving now.”

**Consumers Can Quickly Find Out If They Are Eligible **

Consumers can check their eligibility for big savings whether or not they have received unemployment insurance by using Covered California’s quick calculator.

They will need to input their household income, ZIP code, their household size and the age of each family member and note whether they received unemployment benefits. Once completed, they will see how affordable a silver or bronze plan can be in their area.

“The pandemic has highlighted the importance of quality health care, and whether you end up with a $1 plan, are eligible for no-cost coverage through Medi-Cal or can save hundreds of dollars on your coverage, getting covered is the right thing for you and your family,” Lee said.

Those interested in learning more about their coverage options can: