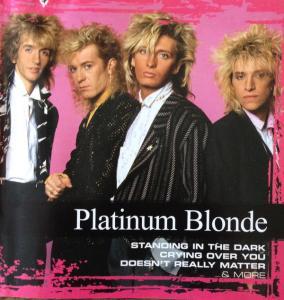 The other four "Metal Plans" are supposed to cover roughly 60% (Bronze), 70% (Silver), 80% (Gold) or 90% (Platinum) of the average enrollee's annual healthcare costs. Note that this does not necessarily mean that it will cover that percentage of your specific expenses in a given year; this is an aggregate average based on actuarial data of the entire enrollee population.

Because of all the variables involved and the difficulty of hitting these percentages precisely, some wiggle room is allowed. Bronze plans can have anywhere from a 58 - 62% Actuarial Value (AV); Silver plans from 68 - 72% and so on. In order to hit these AV thresholds, at full price, Bronze plans usually have lower monthly premiums but high deductibles & other out-of-pocket expenses; Silver plans have somewhat higher premiums & lower deductibles; Gold plans have higher premiums/lower deductibles still; and Platinum plans generally have the highest premiums and the lowest deductibles (if any). There are exceptions to this rule depending on the exact design of the plan, but for the most part this is how they tend to look:

However, there's a couple of important twists to this math, both of which are connected to something called Cost Sharing Reduction (CSR) subsidies.

Under the ACA, there are two types of financial assistance: Advance Premium Tax Credits (APTC), which most people have at least a vague awareness of, and CSRs, which very few people seem to know about (even among the ~5 million or so enrollees who receive CSR assistance).

APTCs work on a sliding scale depending on your income; if you earn between 100 - 400% of the Federal Poverty Level (FPL), you only have to pay a certain percentage of your income in premiums for the "benchmark Silver" plan. Any difference between that percentage and the actual cost of the benchmark Silver plan is the amount you receive in APTC subsidies, which can then be applied towards any Metal Level plan available.

Here's a table showing the 2021 household income levels for different FPL levels for someone living alone and for a family of four, with the official APTC subsidy table and the more generous (and temporary, for now) subsidy table under the American Rescue Plan: 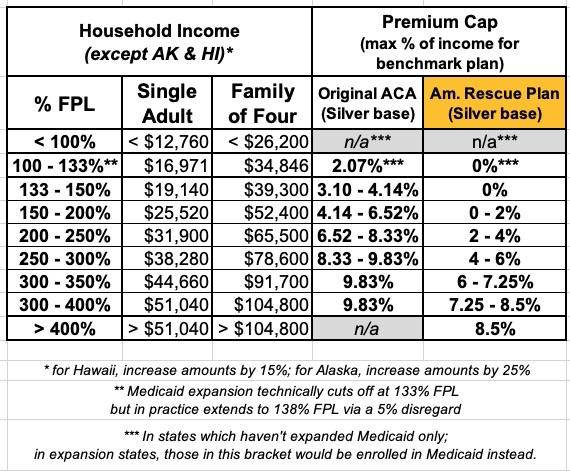 However, you don't have to enroll in the benchmark Silver plan...or any Silver plan, actually. You can choose a Bronze, Gold or Platinum plan if you prefer, and you can still apply that $122/mo towards whatever Metal Level plan you choose.

CSR subsidies are also available to ACA exchange enrollees on a sliding scale, but there are important differences. First, they cut off at a lower income: They're only available for those earning up to 250% FPL, not 400%. Second, they're only available if you enroll in Silver plans, not any other Metal Level. And third, as the name implies, instead of cutting down on your premiums, they're used to cut down on your cost sharing (deductibles, co-pays, coinsurance and other out-of-pocket expenses).

Here's the same table with CSR thresholds added. "AV" refers to the Actuarial Value which the different CSR categories raise the enrollee's coverage up to (by cutting down on their out-of-pocket expenses): 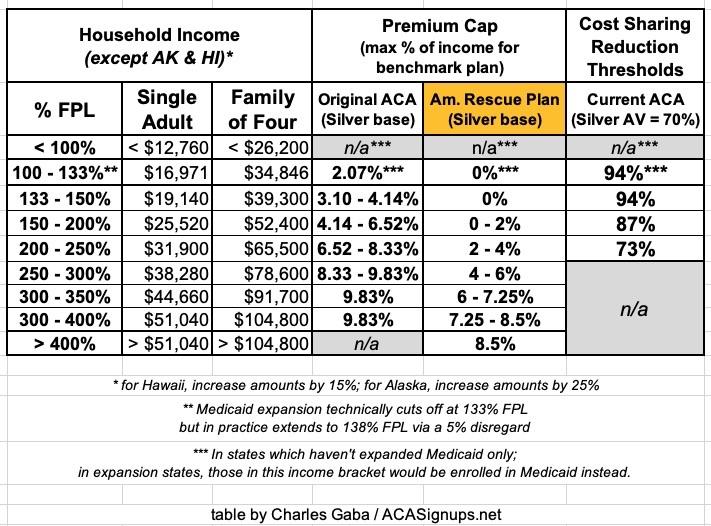 To be honest, I'm not sure I understand why 73CSR is even a thing...it shaves an average of around $1,700 off the enrollee's expenses, which isn't a bad thing, but when looking at the various plans and pricing, most people will probably never notice; it's basically just a slightly more-generous Silver plan. 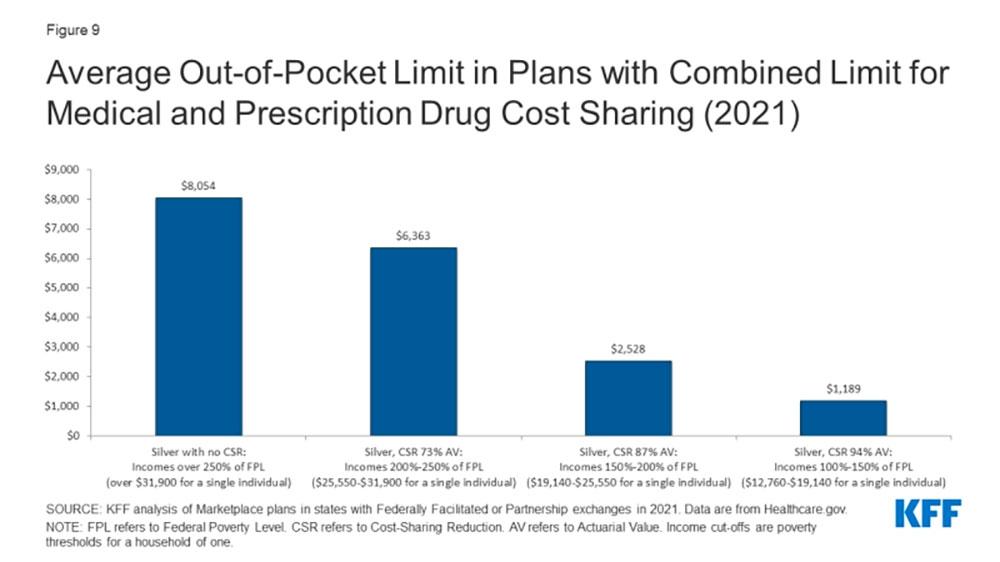 In other words, the Metal Level table above actually looks more like this:

I can't stress this enough: If you enroll in an ACA exchange policy and earn less than 200% FPL, you should absolutely choose a Silver plan...because for you it will actually amount to getting a Platinum plan. You can quibble about whether CSR 87 should be considered "Weak Platinum" or "Strong Gold", but the point is that either one will be a fantastic, comprehensive policy for next to nothing per month (and if you earn < 150% FPL, literally nothing per month). This was already true before the American Rescue Plan, and it's even more true with it in place.

The only problem with CSR 94 & 87 is...well, the naming convention and the odd way in which they're made available. If you enroll via HealthCare.Gov, you'll see the following message after you plug in your income: 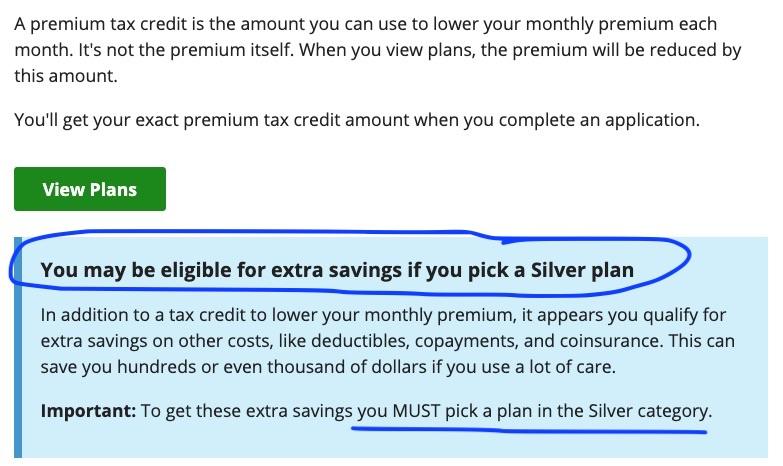 ...and you'll also see references to "Extra Savings" as you filter and shop for the plan you want... 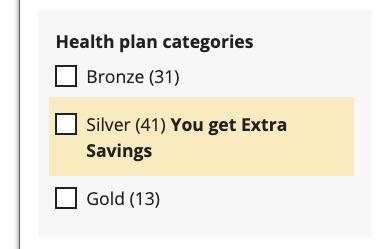 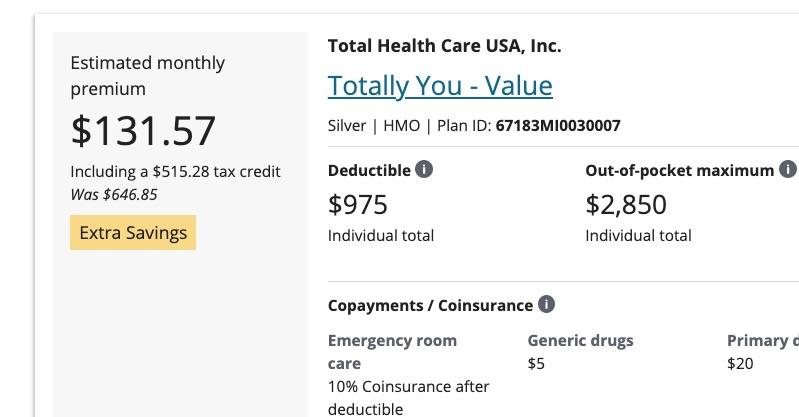 ...but you'll notice that it never actually mentions "CSR","Cost Sharing Reductions" or "94 AV / 87 AV" anywhere during the process.

If you live in California, you'll use CoveredCA.com and the labelling of CSR plans is more clear: 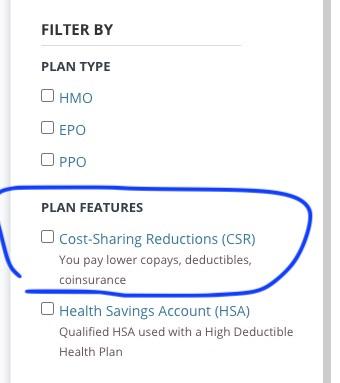 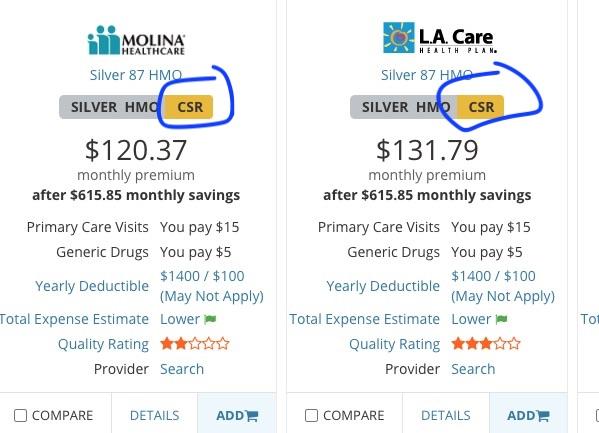 Your Health Idaho's interface seems to be based on the same format as Covered California's, but with some wording differences:

The notices and wording may vary depending on which state you live in and which ACA exchange you use. Some mention "CSR" or "Cost Sharing Reductions" while others may simply say "extra financial help" or "help reducing out-of-pocket costs".

The combination of vague wording and cryptic labelling ("CSR 94 Silver" doesn't exactly roll off the tongue) means many people who should be selecting Silver plans are likely going for Bronze plans instead because they understandably assume that the plan with the lowest premium is automatically the least expensive, without ever looking at the deductible or MOOP amounts.

The American Rescue Plan should help with this confusion to some degree because everyone earning under 150% FPL is automatically eligible for a $0 premium Silver plan anyway...but it can still be confusing.

Personally, I'd like to propose that both "CSR 94" and "CSR 87" be rebranded something like "Secret Platinum" because that's exactly what they are: They're Platinum-level ACA policies available extremely inexpensively for people within a certain income range. By including the "Platinum" branding, it makes it instantly obvious where they fall on the Metal Level scale. As for "CSR 73"...well...meh.