As I noted this morning, CMS has released an updated Special Enrollment Period report which includes SEP enrollment from 2/15 through 4/30 for the 36 states hosted via HealthCare.Gov.

Overall, enrollment during the 2021 COVID SEP is up 3.5x vs. the same time period in 2019, which makes sense when you consider a) the COVID pandemic which has caused millions to lose their income and/or employer-based healthcare coverage; b) the "fully open" status of the COVID SEP; and c) the expanded subsidies put in place under the American Rescue Plan.

SEP enrollment is also up 2.4x over the same time period in 2020; COVID was in full force for most of that period last year, but HC.gov refused to launch a "wide open" SEP as most of the state-based exchanges did, nor were there any expanded subsidies in place, so 2019 is still the more appropriate year to compare against. (Besides, 2020 was a leap year, which tacked an extra day onto the total).

However, if you look at the state-by-state breakout, you'll notice that the relative increase over 2019 varies widely by state, from as little as 72% higher in Kentucky to as much as 450% higher in Mississippi, or 5.5x as many people signing up.

As Andrew Sprung and I have noted before, while there are various reasons for this range, the single biggest one is pretty obvious: Whether the state has expanded Medicaid under the ACA or not.

Again, in states which have expanded Medicaid, people who earn less than 138% FPL are redirected by the ACA exchanges to enroll in Medicaid instead...but in non-expansion states, anyone earning over 100% FPL are eligible for ACA subsidies. This means that there's a 100 - 138% overlap of people who are eligible for ACA exchange subsidies in the 14 non-expansion states but who are pushed over to Medicaid in the other 36 states (+DC, which actually sets their Medicaid eligibilty even higher).

As a result, sure enough, 12 of the 14 non-expansion states have seen the highest increase in SEP enrollment during the COVID era. The two odd men out are Oklahoma (which passed a ballot initiative to expand Medicaid last year but hasn't implemented it yet) and Wisconsin (which hasn't expanded Medicaid under the ACA, but did expand the program up to 100% FPL).

The contrast is pretty stark overall: 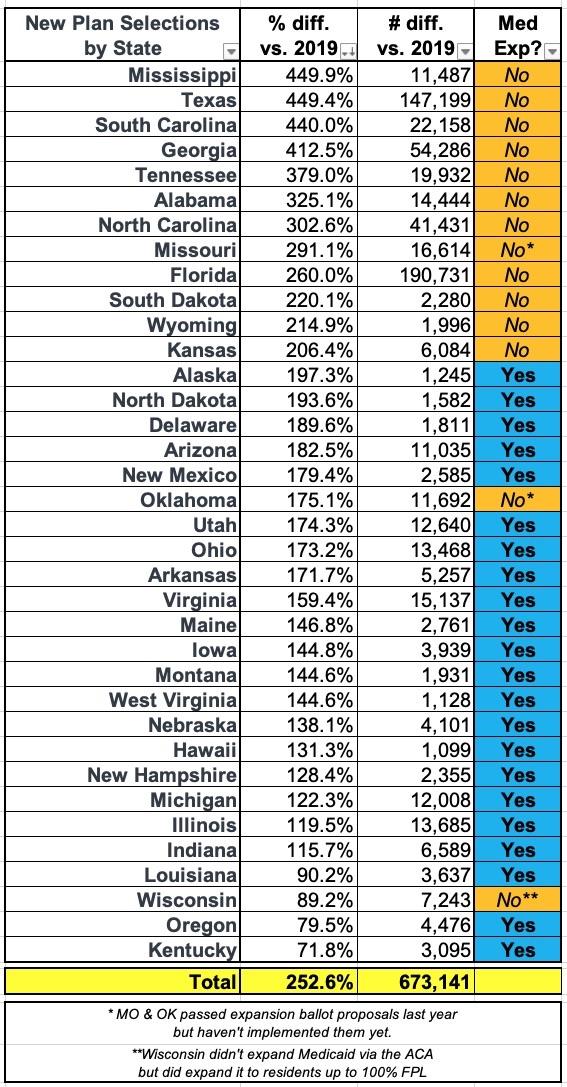