The Urban Institute has come out with a brand-new analysis which projects the impact of making the ACA subsidies which have been expanded & enhanced temporarily under the American Rescue Plan permanent. In other words, this is what they expect the real-world impact would be if Congress were to finally #KillTheCliff and #UpTheSubs permanently (as opposed to for just 2021 - 2022), as I and other healthcare activists been pushing for for years now.

When the Congressional Budget Office issued their score of the American Rescue Plan, they projected that the ACA subsidy expansion provisions would result in on-exchange ACA enrollment increasing by around 1.7 million people in 2022, while net uninsured Americans would drop by around 1.3 million (they projected another 300,000 people would shift from off-exchange to on-exchange ACA plans, and that 100,000 or so would move from employer-based coverage over to ACA exchange plans...presumably either their employers would stop offering coverage next year or the plans they offer would be skimpy enough not to meet the ACA's comprehensiveness threshold for subsidies).

However, as the Urban analysis notes, there's a big difference between the impact of a temporary policy and a permanent one...even for the same year being looked at:

To do so, we show the enhanced subsidies’ effects on coverage as if they were permanent changes (instead of limited to 2021 and 2022), and we assume people, employers, and insurers have fully responded to the new subsidies. Because of our approach, our estimates differ from those by the Congressional Budget Office (CBO). Adhering to their mandate, the CBO estimated the ARPA as written, including the temporary nature of changes to marketplace subsidies. Given that a permanent change in subsidies would be expected to have a larger effect than one that is temporary, our estimate of the reduction in the number of people uninsured is more than three times as large as the CBO’s.

This makes sense. If people assume the change is temporary, they might be reluctant to bother going through the hassle of signing up for an ACA plan, or they might be wary of it being some sort of "bait & switch" situation. If they're confident that the more generous benefits are permanently baked in, they're a lot more likely to jump onboard.

If the ARPA’s temporary enhancements to marketplace subsidies were made permanent and consumers, employers, and insurers had fully adjusted to the new coverage options, we find that in 2022:

Again, the gap between the reduction in the uninsured rate and the increase in exchange-based enrollment is explained by around 475,000 people shifting from employer-based to exchange-based coverage and around 317,000 currently enrolled in non-ACA compliant coverage (#ShortAssPlans, Sharing Ministry plans, etc).

Oddly, they don't break out their estimate of people shifting from off-exchange to on-exchange plans, though they do state that they expect around 465,000 to go from unsubsidized to subsidized ACA plans, some of which should come from the off-exchange pool.

Interestingly, Urban doesn't think too many small employers would stop offering coverage in an attempt to push employees over to exchange plans; instead, they figure most of that shift would come from people whose employers only offer junk plans to begin with:

One area of increased healthcare coverage thanks to the ARP subsidies is one I hadn't really thought much about, but it's a welcome one:

We project that Medicaid and Children’s Health Insurance Program (CHIP) enrollment would increase by about 366,000 people as a result of the ARPA’s enhanced subsidies. These increases would result from increased enrollment in the nongroup market by family members and from eligibility determinations that send some people to Medicaid when they sought coverage after passage of the ARPA.

The Urban study also mentions another important factor which was a big part of my write-up about H.R. 6545 yesterday: The impact on the risk pool from adding millions of new enrollees into the ACA individual market:

This substantial increase in marketplace enrollment under the ARPA’s enhanced subsidies would also reduce average health risk scores in the entire nongroup market. We estimate that lower health risk scores would reduce premiums by about 15 percent on average in 2022, if the changes were fully phased in immediately (data not shown). The main reason average health risk would fall under the ARPA’s enhanced subsidies is that those with higher health care needs are more likely to have already purchased coverage before ARPA. The enhanced subsides, estimated here, are more likely to attract uninsured people with average or lower health needs, including younger enrollees.

Assuming that 15% premium reduction estimate were to prove accurate, it's vitally important because it would also mean a dramatic reduction in the COST of permanently enabling the expanded subsidies:

Lastly, the CBO estimates the ARPA’s enhanced marketplace subsidies would increase federal outlays and reduce revenues, increasing the deficit by $21.9 billion in 2022. We estimate net federal spending to increase by $17.6 billion in 2022 under our assumption of a permanent change in law. One likely reason for the difference in costs is that, under our assumptions, we estimate nongroup premiums would fall by 15 percent.

In other words, the Urban Institute thinks that net federal spending would increase by 20% less in 2022 than the CBO does even though they also believe total ACA exchange enrollment would increase by 3x as much (not to mention the 366K increase in Medicaid/CHIP enrollment, which are mostly federally funded as well).

Put another way, the CBO thinks around ARP will spend around $21.9 billion more to help cover roughly 10.2 million people (~$2,150 apiece) in 2022 if the expanded subsidies are only around temporarily, while Urban thinks making them permanent would mean spending just $17.6 billion to help cover 13.5 million people ($1,300 apiece).

In fact, if that 15% premium reduction into account is also taken into account, you should even argue that the remaining 5.2 million unsubsidized enrollees would also be benefited, since they'd see their premiums drop by 15% as a result of this policy (similar to a reinsurance program). If you include them, that's just $940 apiece in increased federal spending in 2022.

The Urban study even breaks their estimates out by income bracket to see how much different groups would save in both percent and dollars, how much they think the uninsured numbers and percentages would drop in each, broken out by 100 - 138% FPL (non-expansion states); 138 - 200% FPL; 200 - 400% FPL and over 400%.

They even break out their estimates of the net reduction in the uninsured population in every state in 2022 if the ARP subsidies were to be made permanent: 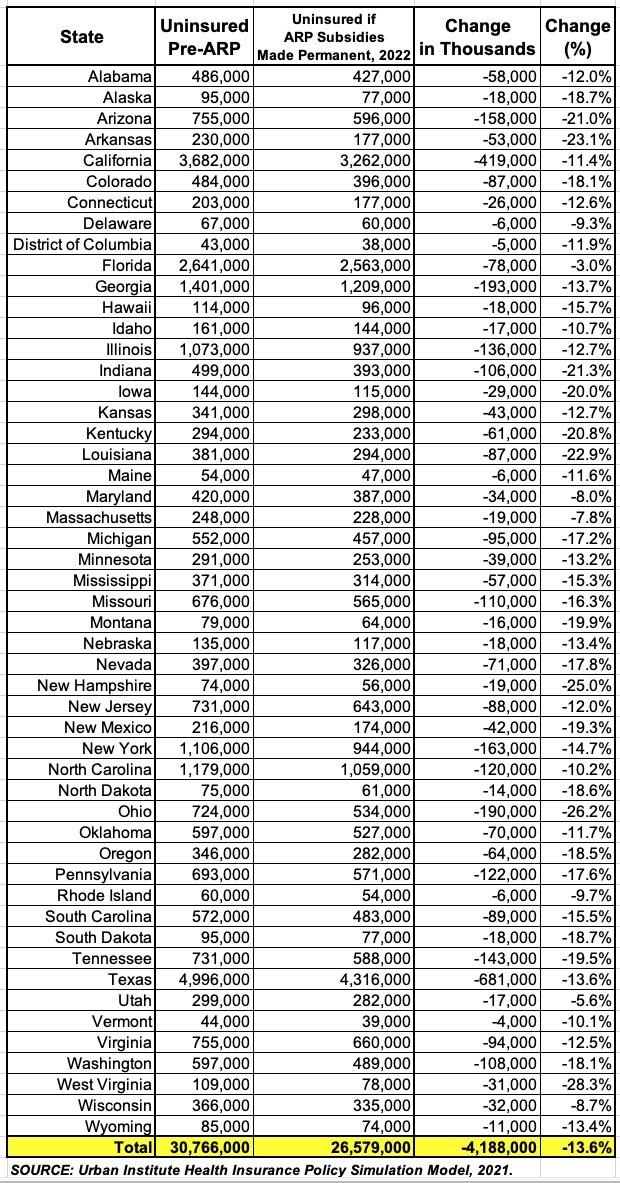