So far, so good. Nothing terribly surprising...Donald Trump tried to stiff federal contractors out of a couple billion dollars, was sued and has to cough up the dough. What else is new, right?

If that's where the story ended, it would be mildly interesting but that's about it. However, as those of you who read the entire February piece know, there was one hell of an additional unexpected twist:

Yes, that's right: The judge in the case...along with other judges in two other similar cases...ruled that the federal government has to pay CSR reimbursements to the carriers for all twelve months of 2018 as well...even though the carriers had already raised their premiums substantially to make up the difference:

As I noted in February:

The implications of this ruling, and the other similar ones, are potentially enormous...assuming it holds up on appeal and the government actually ends up paying out the full 2018 CSR reimbursements.

That's where things stood as of February. I knew there was a long appeals process and some other procedural stuff which could drag things out for months or possibly even years, and it's the last I heard about any of these cases...until Wednesday evening, when Amy Lotven tipped me off about the newest development:

Federal Judge Margaret Sweeney issued a final judgment in the class action case Common Ground Healthcare Cooperative v. United States ordering the government to reimburse the class of about 100 Affordable Care Act plan issuers nearly $1.6 billion in cost-sharing reduction payments owed for the 2017 and the 2018 plan years. The class action is one of dozens of cases filed against the United States for failing to reimburse issuers for reducing out-of-pocket cost for certain low-income enrollees.

Unfortunately, the rest of the story is behind a firewall, but Bloomberg Law has it covered as well:

A class of health insurers is entitled to nearly $1.6 billion from the U.S. under an Obamacare program designed to make insurance affordable for low-income people, the U.S. Court of Federal Claims said Oct. 22.

Sweeney left the case open so the insurers could identify the amount each was owed. The government and the class said in an Oct. 18 joint status report that the total amount due for unpaid claims in 2017 and 2018 is nearly $1.6 billion. They asked the court to enter judgment without prejudice to the government’s right to appeal the February decision.

...The government already has appealed several cases brought by other insurers to the U.S. Court of Appeals for the Federal Circuit.

OK, so today's ruling is really just about locking down the precise dollar amounts which are owed to each of the ~100 insurance carriers for both 2017 and 2018. Note that the federal goverment agrees with the actual dollar amounts in question for both years...they're just disputing whether or not they have to actually pay those amounts out.

The case (and others) will still have to slog through the appeals process, so no checks are gonna be written for awhile yet.

Fortunately, Lotven has provided me with a handy link which breaks out the dollar amounts: 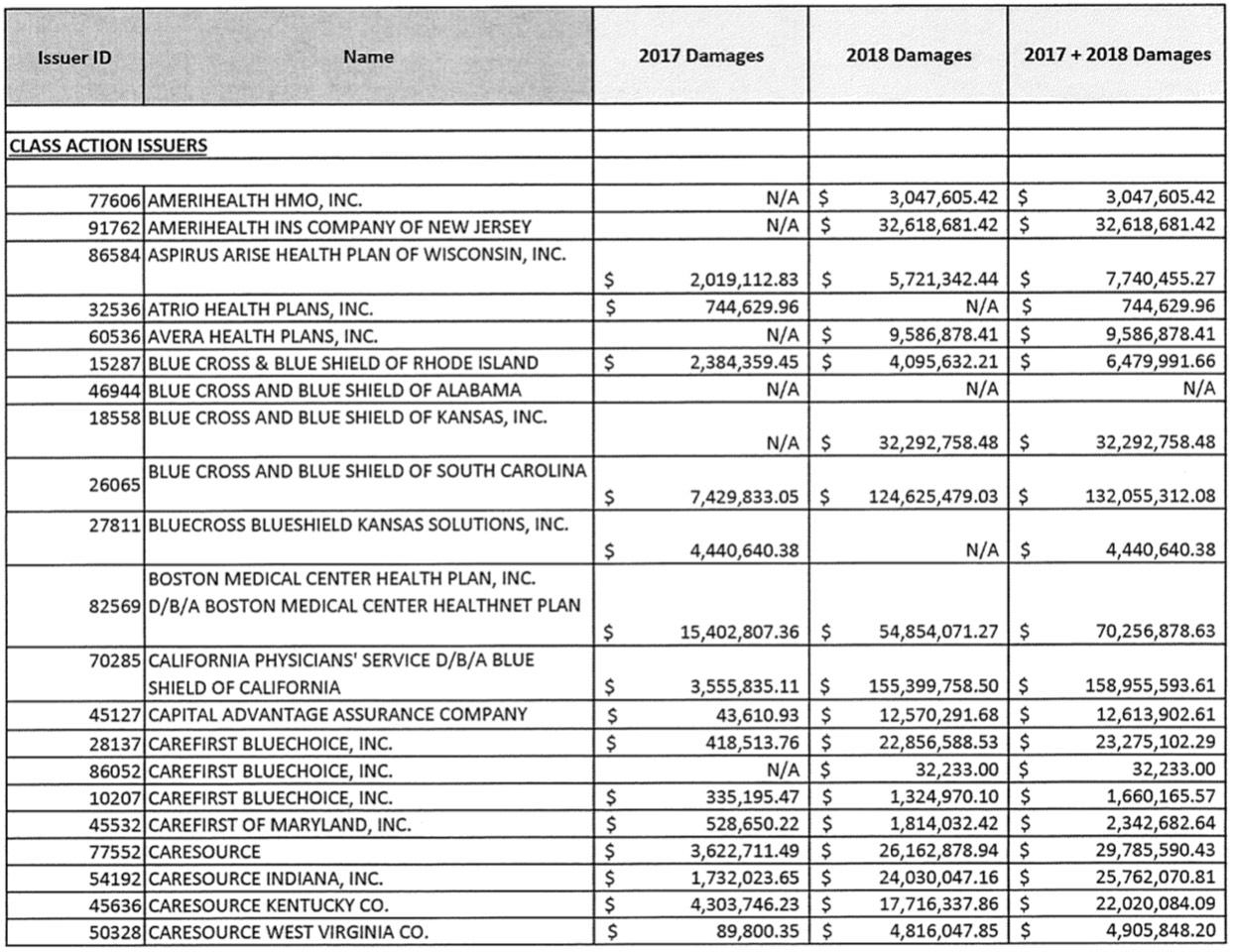 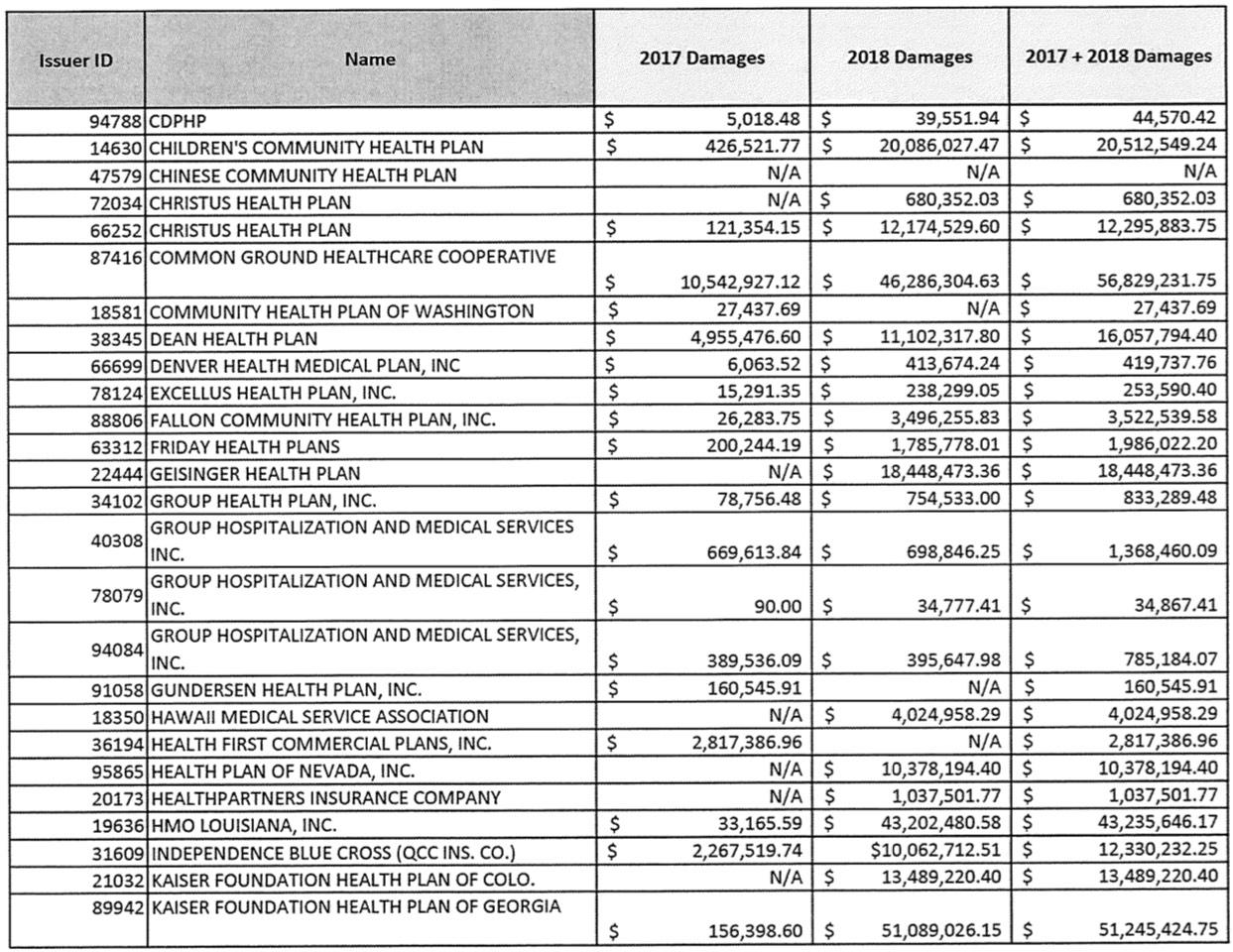 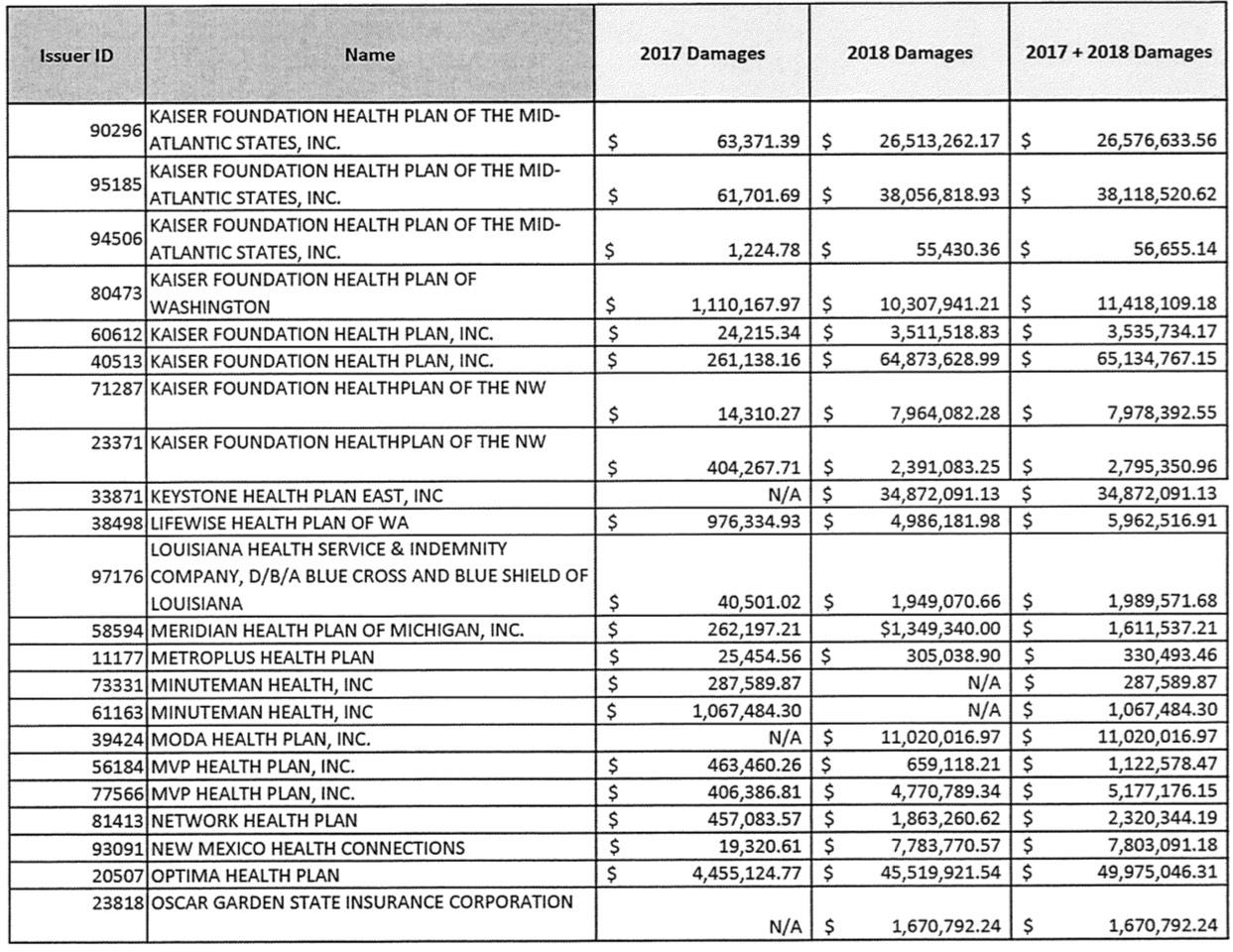 The 2017 total is a little over $131 million. Remember, this is only one of "dozens" of lawsuits, although it's probably the largest single one in terms of both the number of carriers and the dollar amounts. I still don't know what the grand total owed is for the last three months of 2017, although the estimates I've seen range between $1.5 - $2.0 billion. Assuming it's the midpoint, this case only represents about 8% of the total for 2017. For 2018, it's even fuzzier...you'd normally expect the 2018 total to only be around 4x as much as 2017 (four quarters vs. one), but in this case it's a whopping eleven times as much.

I'm not exactly sure what accounts for this...it's possible that deductibles are eaten up at a much faster rate in the first 3 quarters of the year than the last one, but I've been told that it's the other way around--supposedly lots of people schedule appointments/procedures in the last quarter of the year specifically to use up their deductible before it resets again on January 1st.

In any event, we're talking about a LOT of money here...not only the $131 million which is clearly owed to the carriers no matter what your angle, but also an additional $1.46 billion for 2018. Wow.

On the surface, this may sound like yet another case of the Big Corporations getting to Rip Off the American Public, since they're essentially double dipping--they got to jack up premiums on unsubsidized consumers through the roof and still get paid the very money they used to justify those increases in the first place.

Remember: Under the Affordable Care Act, insurance carriers on the Indvidual Market have to spend at least 80% of their revenue on actual medical claims, limiting them to no more than a 20% gross margin. If they fall below the 80% threshold (on a 3-year rolling average basis), they have to pay back the excessive profits in the form of rebates to the policyholders.

As I noted in my big MLR Rebate Project from September, the 2018 MLR rebates were by far the largest in history: Nearly $770 million being paid out to around 3.7 million individual market enrollees, for an average of around $208 per person. However, some enrollees received much more than that...I've documented cases of enrollees who received rebate checks for as high as $2,500 or more.

I also noted that due to significant overestimates on the part of insurance carriers in raising premiums for 2017 & 2018, combined with the 3-year rolling average formula, next year's MLR rebates could be significantly higher yet: Potentially as high as $1.7 billion on the individual market alone...although that's based on an extremely crude formula which makes some major assumptions about 2019's actual medical trend and claims.

The thing is, though...even that $1.7 billion projection still doesn't include the additional CSR lawsuit judgement money. Assuming that a) the judgement withstands the appeals process; b) ends up being actually paid out to the carriers, and c) gets accounted for as 2017 and 2018 revenue respectively (via backdating the accounting records), it's conceivable that the carriers will have to turn right around and pay out a big chunk of that $1.6 billion settlement right back to their policyholders!

If so, and if it was the full $1.6 billion (it won't be), that could bring the total 2019 MLR rebate payments up to as much as $3.3 billion...over 4x as much as this year's rebates, which were in turn nearly twice as much as any other year since the ACA was signed into law back in 2010.

Of course, it's important to remember that not every carrier has to pay out MLR rebates (only around 70 did this year out of the several hundred offering ACA-compliant policies nationally), so in some cases the CSR payments would simply lower their MLR ratio from, say, 85% to 81% or whatever. The odds are that only a portion of that $1.6 billion would have to be rebated no matter what.

On the other hand, remember that this is only a portion of the total CSR payments owed to carriers. The grand total is much higher, although the rest of it may depend on how other judges rule in the other cases.

It's also possible that these "pay up for 2017 and 2018" rulings will be partly or fully overturned by the 4th District or other courts, or perhaps the U.S. Supreme Court, and the feds will never end up having to pay out a dime...but then again, who the hell knows?

To give you just one example, let's look at Blue Cross Blue Shield of Soutn Carolina. According to the table above, they're owed $7.4 million in CSR payments for Q4 2017, but also another $124.6 million for all of 2018.

How might this impact their MLR rebates next year?

HOWEVER, what happens if all $132 million in CSR money is actually paid out to BCBSSC? I don't know how it would be accounted for legally, but assuming it gets backdated to 2017 & 2018 respectively, their 3-year rolling average would suddenly plummet from 79.3% to just 74.6%. That would mean instead of having to pay back $9.7 million, they'd have to pay back $88.5 million...averaging a whopping $447 apiece. (Of course, if the payments are listed as 2020 revenue (there's no way the appeals process will be done this year), it won't show up in the MLR records until 2021 - 2023).

This is all just speculation, of course. There's a good chance that the 4th Circuit will overturn these judgments. There's also a good chance that they'll strike down the 2018 portion and restrict payment to just the original 3 months of 2017 only, which would reduce the MLR rebate impact dramatically. It's equally possible that the Supreme Court will do the same if it gets to that point...and that could take us into 2021, 2022 or beyond. And don't get me started on what might happen if the ACA is struck down by the TexasFoldEm lawsuit...

...but if these judgments hold and the government actually pays out, the next couple of years' worth of MLR rebates could be monstrous for some people.

UPDATE: I've gone through all ~100 carriers on the list and run the numbers using the same methodology as I did for BCBSSC. It looks like this was an outlier; most of the carriers likely wouldn't have to make any additional MLR rebates. Overall, it looks like about 1/4 of them would have to, and the total dollar amount being rebated would likely be around 20% of the total.

HOWEVER, it's important to remember that these 100 carriers only represent a portion of the total ACA individual market, which means the actual total (assuming the court rulings in other cases are similarly held up) could be several times that amount anyway, making my "up to quadruple" headline accurate anyway!