RESIDENTS OF THE FOLLOWING STATES CAN STILL ENROLL IN TIME FOR JANUARY COVERAGE:

ALSO, REMEMBER THAT RESIDENTS OF ALL 50 STATES (+DC) CAN STILL ENROLL FOR FEBRUARY COVERAGE.

OK, I made those last two up.

But yes, Clay County, TN Director of Schools Jerry Strong is indeed blaming the Affordable Care Act for his county's decision to pull the plug on the entire district in the middle of the school year:

The economy is so bad in Clay County, Tennessee that school is canceled indefinitely.

The decision to ebb budget concerns by shutting academic doors came down on Thursday when Clay County Director of Schools Jerry Strong quite literally decided to lock the doors of the county’s schools. He was particularly concerned with partially unfunded government mandates and what he believed to be the effects of Obamacare making it impossible to keep funds in the green.

Tennessee: Another CO-OP bites the dust.

(sigh) I noted, at the end of my "Transitional Plan" rant a few days ago, that in addition to the Kentucky Health CO-OP going belly up, there would likely be additional casualties announced over the next couple of weeks:

By contrast, the damage from the Risk Corridor program being crippled is specific, quantifiable and obvious: Company X lost $22 million in 2014; they were supposed to receive $20 million (or whatever) back in risk corridor reimbursements; the CMS dept. only has $2.5 million to pay them back with, period, so they have to eat the remaining $17.5 million loss until next year or the year after...if they're able to stick it out that long.

The Kentucky Health CO-OP couldn't stick it out that long...and it's possible that similar press releases may be forthcoming for a few other CO-OPs (and/or other smaller insurers) over the next week or so.

Sure enough, the Tennessee CO-OP, Community Health Alliance, has pulled the plug as well: 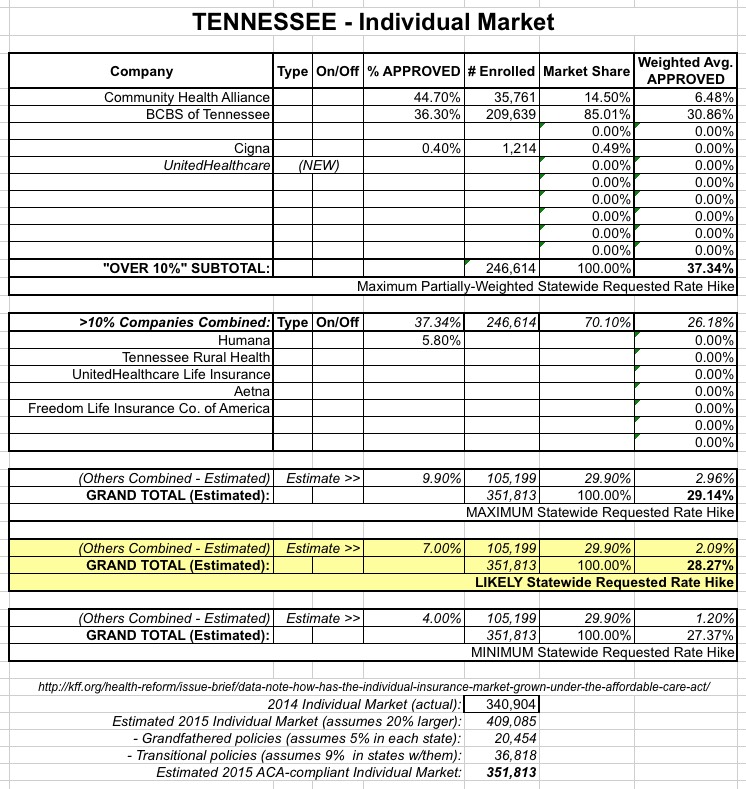 Well, score one for the Koch brothers:

In December, Tennessee Gov. Bill Haslam, a Republican, got the deal he wanted from the Obama administration: Tennessee would accept more than $1 billion in federal funding to expand Medicaid, as allowed for in the Affordable Care Act, but Obama aides would allow Haslam to essentially write staunchly conservative ideas into the program's rules for the state. He dubbed the reformed Medicaid program "Insure Tennessee."

But the state's chapter of Americans for Prosperity, the national conservative group whose foundation is chaired by controversial billionaire David Koch, argued Haslam was just trying to trick conservatives into implementing Obamacare in their state by giving it a new name. AFP campaigned aggressively Haslam's plans for the next six weeks, even running radio ads blasting GOP state legislators who said they might vote for it.

On Wednesday, Haslam's bill died in a committee of the Tennessee state senate. The vote was one of the clearest illustrations of the increasing power of AFP and other conservative groups funded in part by the Koch brothers.

Tennessee: Eyebrow-Raiser: Insurance Co. leaves ACA exchange due to demand being too HIGH!

Presented without comment, because this story is so awesome there's not much I could say to make it any better:

Community Health Alliance has pulled its health insurance plans off the federal marketplace because it hit its enrollment goals.

It'll still have to get through the GOP-controlled state legislature, of course, but it looks like you can scratch Tennessee off the "Expansion Refusenik" list. I presume this'll be a "Private Option" program similar to the one in Arkansas:

In a major policy move, Gov. Bill Haslam has announced the new Insure Tennessee plan, a two-year pilot program to provide health care coverage to tens of thousands of Tennesseans who currently don't have access to health insurance or have limited options.

The plan would be leveraged with federal dollars, said Haslam, who has been working on a Medicaid expansion plan that could gain approval from both federal officials and the Republican-dominated General Assembly.

Excellent news!! I've posted exactly one (1) Tennessee-specific blog entry since I started this site a year ago, having to do with TN's possible caving on Medicaid expansion. Aside from that, I've had bupkus outside of the official monthly HHS reports during the First Open Enrollment period (OE1)...until today.

Today I learned that the number of Tennesseans currently enrolled in QHPs (as in currently in-force policies) via the federal ACA exchange stands at 125,704.

Assuming 88% of the original number paid their premiums, that would be about 133,200 as of last spring, which means Tennessee has only had about a 5.7% net attrition rate over the past 6 months.

Now that PA's GOP Governor has agreed to expand Medicaid, will Tennessee be next? (UPDATE: Or perhaps Wyoming?)

A few days ago, news broke that Pennsylvania's Governor Tom Corbett, whose re-election numbers are in the toilet and who is desperate to get Pennsylvanians to like him, has finally agreed to the Medicaid expansion provision in the Affordable Care Act.

While "doing a single decent, human thing after a couple of years of being a jerk about it" shouldn't really count as being praiseworthy, I suppose he deserves at least a small golf clap, just as Michigan Gov. Rick Snyder and Ohio Gov. John Kasich did.

Anyway, next up to bat would appear to be Tennessee Gov. Bill Haslam:

In a move that could mean health coverage for thousands of Tennesseans, Gov. Bill Haslam said Thursday that the state may soon submit a proposal to Washington to expand Tennessee's Medicaid program but did not release any new details on how it might work.