UPDATES: And So It Begins: Humana says "Screw you guys, I'm going home."

After their attempted merger with Aetna was roundly shot down by the federal government, insurance giant Humana issued a press release today with some major news:

Regarding the company’s individual commercial medical coverage (Individual Commercial), substantially all of which is offered on-exchange through the federal Marketplaces, Humana has worked over the past several years to address market and programmatic challenges in order to keep coverage options available wherever it could offer a viable product. This has included pursuing business changes, such as modifying networks, restructuring product offerings, reducing the company’s geographic footprint and increasing premiums.

All of these actions were taken with the expectation that the company’s Individual Commercial business would stabilize to the point where the company could continue to participate in the program. However, based on its initial analysis of data associated with the company’s healthcare exchange membership following the 2017 open enrollment period, Humana is seeing further signs of an unbalanced risk pool. Therefore, the company has decided that it cannot continue to offer this coverage for 2018. Through the remainder of 2017, Humana remains committed to serving its current members across 11 states where it offers Individual Commercial products. And, as it has done in the past, Humana will work closely with its state partners as it navigates this process.

According to this article from Zachery Tracer of Bloomberg News:

The company said it had about 204,000 members in individual health insurance plans in January, including 152,000 customers in Obamacare-compliant health plans. That’s down from 654,800 in all individual plans on Dec. 31, after Humana exited some states and scaled back its footprint in others.

Here's the relevant portion of the detailed earnings report:

It is likely no small coincidence that all 11 of these states happen to be on the federal exchange (HealthCare.Gov), where enrollment dropped by around 5% year over year, as opposed to the state-based exchanges, where enrollment increased by about 2%.

I've put together tables listing all 156 counties by state, along with the TOTAL number of 2017 QHP selections in each county FOR ALL CARRIERS, NOT JUST HUMANA. I cannot stress this enough: The numbers listed include every carrier on the exchange, not just Humana, although for around 30,000 people in 16 Tennessee counties, Humana is the only carrier participating in the exchanges (although there should be at least 1-2 off-exchange carriers available in each of these counties, albeit without any tax credits available).

The third column lists the actual number of people likely to still be enrolled in a Humana policy as of the end of 2017 due to non-payment and other attrition factors (roughly 71% of the QHP selection total). These are the number of current enrollees who would be forced to switch to a different carrier for 2018 (assuming that the ACA still survives at all by that point, of course).

When you add up all 11 states, there's around 1.93 million people enrolled in exchange plans across all carriers in these counties, of which Humana makes up roughly 7.8%. Of those, I figure around 108,000 will still be enrolled by the end of the year, plus the additional 52,000 off-exchange indy market enrollees. 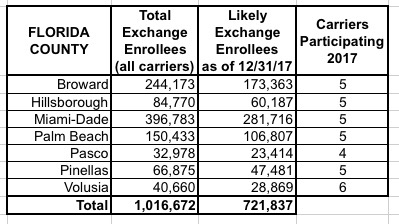 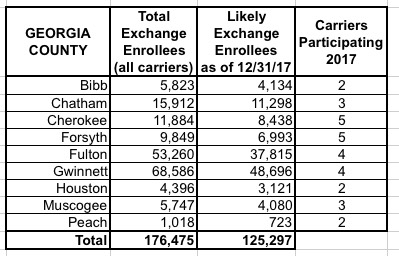 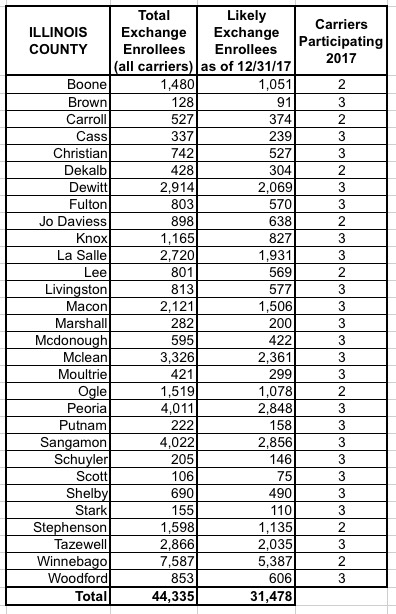 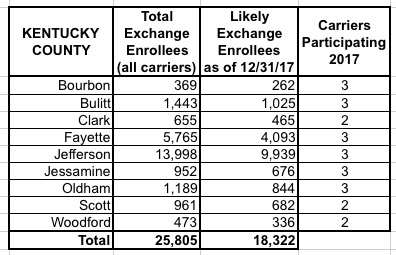 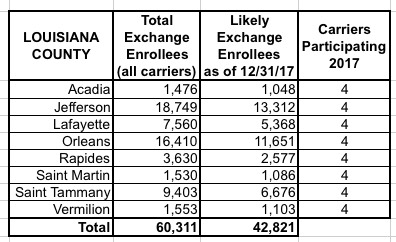 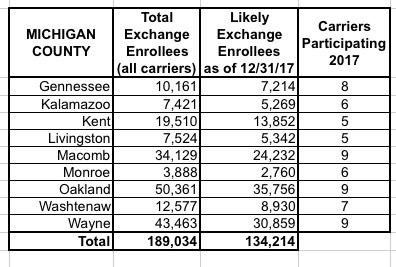 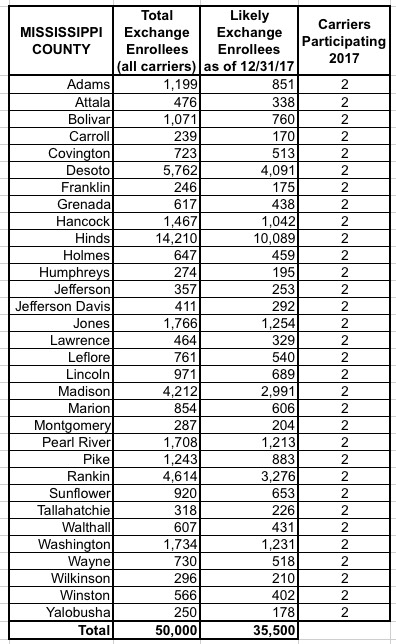 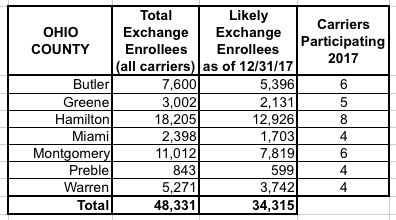 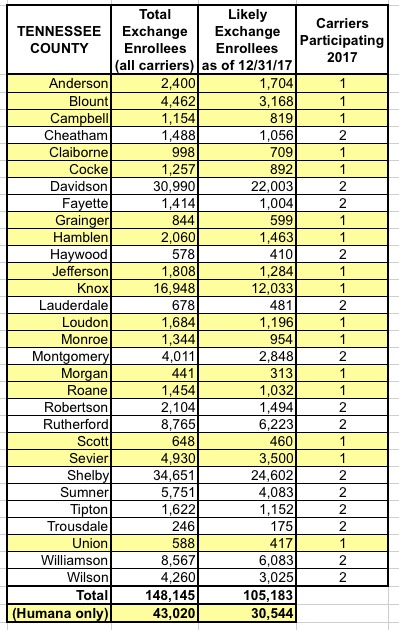 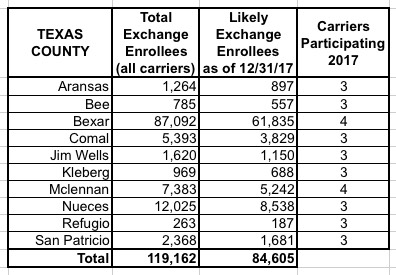 UPDATE 2/15/17: I've made several updates above due to confusion about just how many indy market enrollees Humana actually currently has; it turns out it's actually only 204,000, of which 152,000 are on ACA-compliant. I tried keeping the old and new numbers visible but it got too confusing/messy, so I've reworked the piece to reflect the corrections only.

It should also be noted that at least 43,000 (21%) of all of Humana's indy market enrollees can be found in Tennessee alone (28% of ACA-compliant policies, but remember about 1/4 of the 204K are off-exchange, and some are grandfathered/transitional policies which aren't ACA compliant).

In addition, I've updated all of the tables to show the number of carriers participating on the ACA exchanges this year, including Humana. While there are 16 TN counties in which Humana is the only option today, there are a bunch of others in various states--especially Tennessee and Mississippi--where there are only two carriers, so Humana leaving would leave only one other carrier left.

Another tidbit from Zach Tracer's article: Humana claims that they're currently anticipating losing about $45 million on ACA-compliant plans (presumably both on & off exchange) in 2017. Assuming they're being honest about this, that works out to roughly $300 per enrollee...and this is apparently even with Humana's significant unsubsidized rate hikes for 2017. As "M E" notes in the comments, while that's a nominal amount compared to their total revenue (they're projecting around $54 billion this year), it's not chump change on a per-enrollee basis.

Of course, they're also making this announcement immediately after having their megamerger with Aetna torpedoed, and Aetna has already been busted for lying about losing money on the exchanges in at least two states, so I'd take this with a grain of salt.

In any event, whether they're being completely on the up & up or not, and regardless of whether they're doing so for political reasons or not, the fact remains that there's nothing legally preventing Humana from bailing. As I've noted several times before, this is the main Achilles' heels of the ACA exchanges: It completely depends on the whim of private, profit-based insurance carriers.

UPDATE: Over at Balloon Juice, David Anderson has a brief but wonkier take on Humana's situation:

In Tennessee, Humana was the sole carrier in a significant chunk of the eastern portion of the state. There they offered a single silver which meant the spread between the benchmark Silver and the least expensive Silver was nothing. This struck me as odd in the fall of 2016. It was their universal strategy. Every county where they participated in 2017, they only offered a single Silver plan. If they are either the sole carrier or the least expensive carrier in a county, their strategy actively chose a small and comparatively sick risk pool.

Yes, there is policy uncertainty and the sabotage of the last week of enrollment which decreased the proportion of young people signed up has made 2017 a much harder year for all on-Exchange insurers but a significant chunk of Humana’s problems were self-inflicted.

As a snarky side note, this is how competetive markets are supposed to work — the ineffective and inefficient leave.