Tennessee: BCBS comes to the rescue...with a warning

Another very nice scoop by Sarah Kliff of Vox.com:

BCBS of TN says they’ll sell coverage in the 16 Eastern TN counties that had no carrier signed up for 2018. https://t.co/g3dkqU4G1m

Here's the full text of the letter; emphasis mine:

We appreciate getting to meet with you and your team yesterday to update you on BlueCross’s position relative to the individual Marketplace for Tennessee as the first deadline for 2018 approaches.

As we discussed, BlueCross’s journey to get and keep people covered under this program has proven challenging, with three consecutive years of volatility and losses totaling more than $400 million. I’m pleased to report that, though still very early, our 2017 performance has improved due to a combination of better claims experience and a more sustainable rate structure based on the medical needs of the members we’re serving.

OK, that's good news: They lost money 3 years in a row, but things are finally looking up this year, though they don't go into details (Smaller loss? break even? Small profit?)

With this in mind, I want to confirm that BlueCross is willing to serve the Knoxville region in the 2018 individual Marketplace.

Excellent news. There are quite a few counties in Tennessee which only have one carrier participating in the ACA exchange this year. In 16 of those counties around the Knoxville area, that carrier was Humana...which, as you'll recall, decided to bail on the entire individual market nationwide a couple months back, effectively throwing their hands in the air and saying "screw you guys, I'm going home!"

Just as BCBS of Arizona did in Pinal County last year, so too has BCBS of Tennessee arrived on their white horse to save the day in Tennessee. This is not terribly unexpected--many figured that someone would jump in, as the Knoxville exchange market was wide open (there's a few off-exchange options for residents, but still), but it's still quite welcome news.

Again, I want to stress that our openness to this action is in no way a political decision. Nor is it a reflection of our perspective on the stability of individual Marketplace overall. In fact, we can’t justify doing so based solely on current political uncertainty, but instead we believe it is an extension of our mission to serve our fellow Tennesseans, especially those who do not have other options for coverage. As you know, BlueCross made a similar decision for 2017 when we intentionally elected to stay in five of eight Marketplace regions to ensure every region had at least one coverage option, and none was left uncovered.

"Someday, and that day may never come, I will call upon you to do a service for me. But until that day, accept this justice as a gift on my daughter's wedding day."

OK, that's a bit unfair. Regardless of what you think of insurance carriers, they are putting out this particular fire, although really, given that I'm assuming they make a fair profit off of Medicare Advantage contracts, I woudln't give them too many points for altruism here either.

Here's the other kicker, though:

Given the potential negative effects of federal legislative and/or regulatory changes, we believe it will be necessary to price-in those downside risks, even at the prospect of a higher-than-average margin for the short term, or until stability can be achieved.

They're putting their cards on the table and stating point blank that they're gonna jack rates up sky-high specifically due to confusion and uncertainty about not having the slightest clue WTF Trump, Price and the GOP are actually going to do to the individual market next year. If they had left it at that, dayenu!! ("It would have been enough")...but they then come right out and say:

These risks include but are not limited to the elimination of Cost Sharing Reduction subsidies (CSRs), the removal of the individual mandate and the collection of the health insurer tax.

OK, the health insurer tax is a hard number which was already collected for a couple of years before being temporarily dropped, so they're just throwing that in for the heck of it, but still. Trump has overtly threatened not to pay CSR reimbursements and not-so-overtly hinted that HHS won't enforce the mandate penalty. The "...not limited to" bit basically translates as "we don't know what the insane, petty, spiteful baboon running the Executive Branch is going to do next, so we're padding things even more to account for that as well."

As we discussed, we will request flexibility related to the requirement to serve a majority (51%) of the rating areas year over year, specifically with respect to adding Knoxville to our existing five region footprint. And, while we hope this is unnecessary, we reserve the right not to sign our QHP agreement in September in the event of any post-bid changes that destabilize the market and affect our risk exposure.

"Don't f*ck with us or we'll change our minds and pull out at the last minute so fast it'll make your heads spin."

With our past losses and the continued uncertainties associated with the individual Marketplace, we are not willing to consider expanding our current footprint in 2018 beyond the addition of the Knoxville region, as the other geographies are currently covered by other carriers. We believe this fiscally conservative approach to limit our risk profile in this market continues to be in the best interest of all the members BlueCross serves across all lines of our business.

Finally, I want you to reiterate that BlueCross’s decision is a direct reflection of our confidence in the expertise and judgment of you and your team. We appreciate all of your efforts to help achieve some measure of stability for consumers and carriers alike in a most challenging market.

I’ll ask our team to schedule another visit soon to discuss our thoughts for 2018 in more detail and how best to move forward. 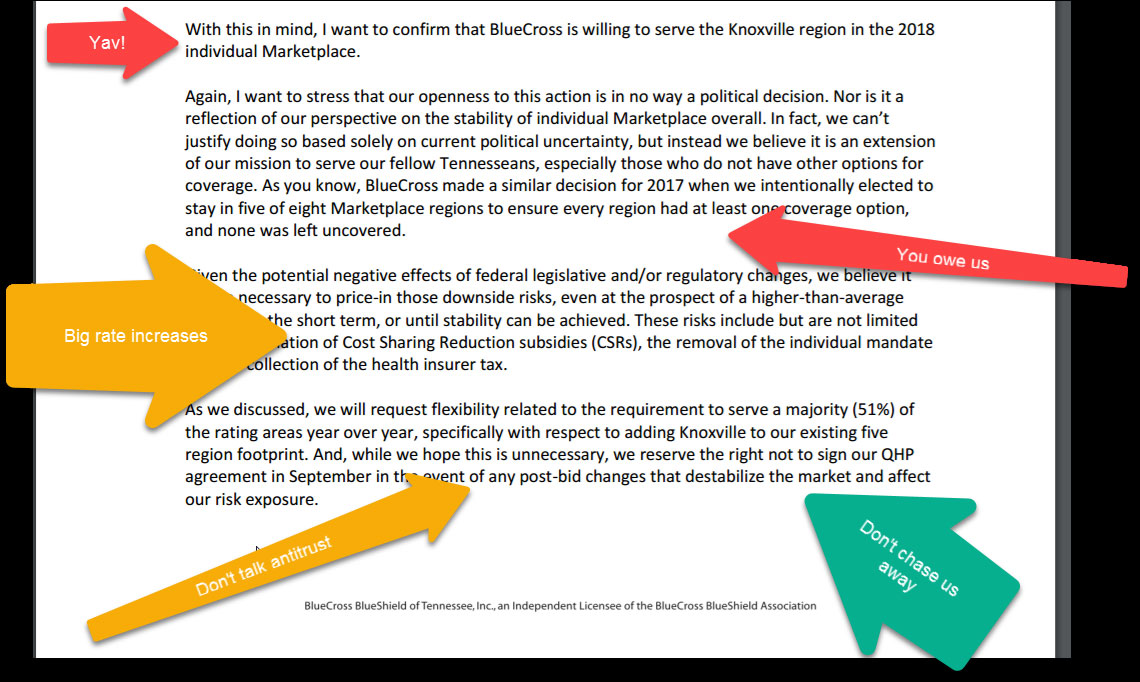