By Request: How the Delta Wave has ravaged Red America, month by month.

Instead of looking at the cumulative county-level COVID death rates by 2020 partisan lean since the Delta Variant wave hit the United States in June, the graphs below look at how that has played out for each individual month since then.

Again, the COVID death data comes from Johns Hopkins University for 47 states + DC; the data for Nebraska and Utah comes from the New York Times COVID tracker github; and for Florida, it comes from the White House COVID-19 Team Community Profile Report.

The data does not include the U.S. territories (since they don't vote in the November Presidential election), and it's also missing around 4% of total COVID deaths across the 50 states + DC due to their county of residence being unknown.

With that in mind, here's what the Delta wave has looked like in June, July, August, September, October, November and the first 2 weeks of December 2021: 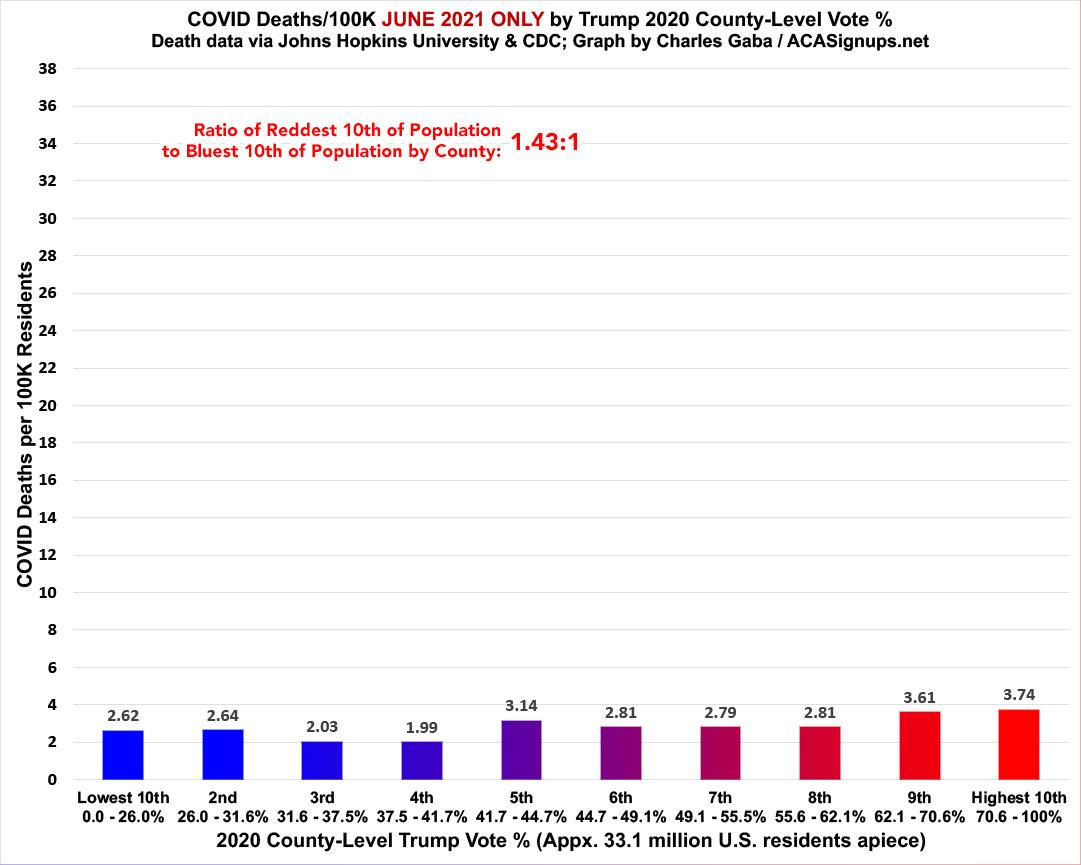 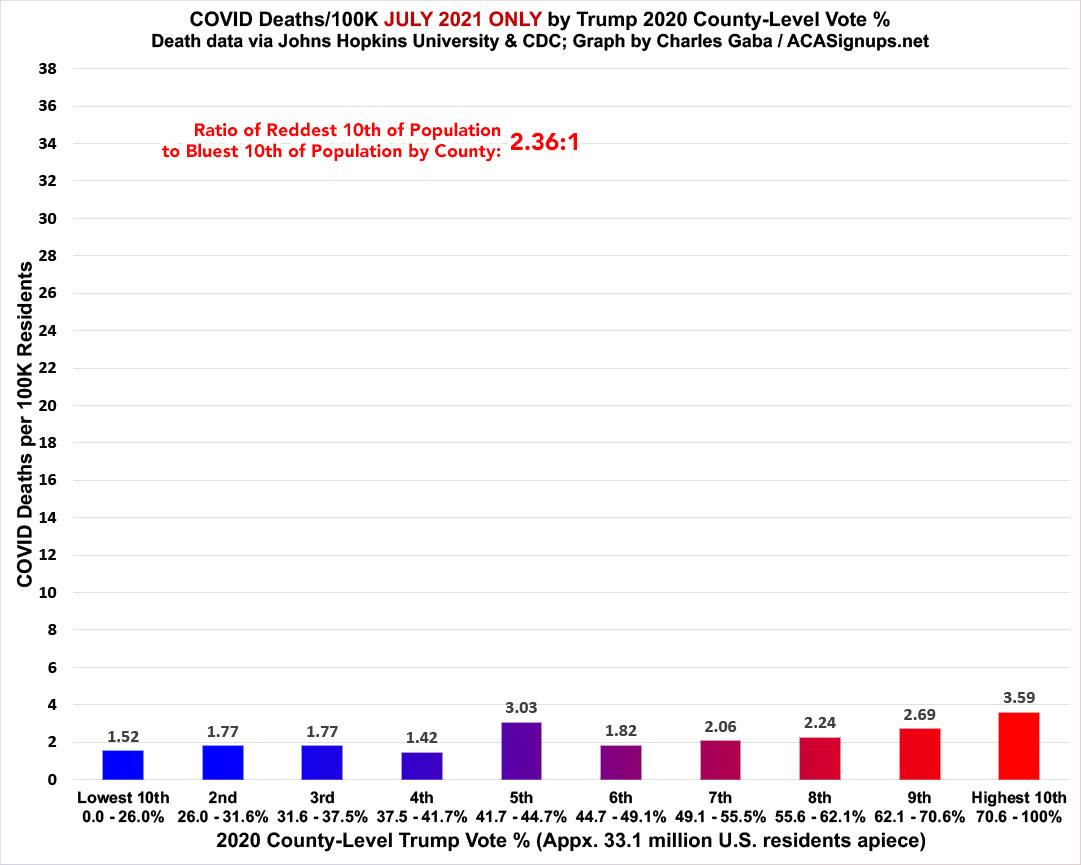 The first thing worth noticing is that while Delta hit the U.S. shores sometime in June, the death toll from it didn't really start hitting on a significant scale until August. In fact, August is when the Red/Blue death rate ratio has been the highest since the Delta wave started, which surprised me (I assumed the gap was highest in October). During the full month of August 2021, the COVID death rate was over 7.3x higher in the reddest tenth of the U.S. than in the bluest tenth. 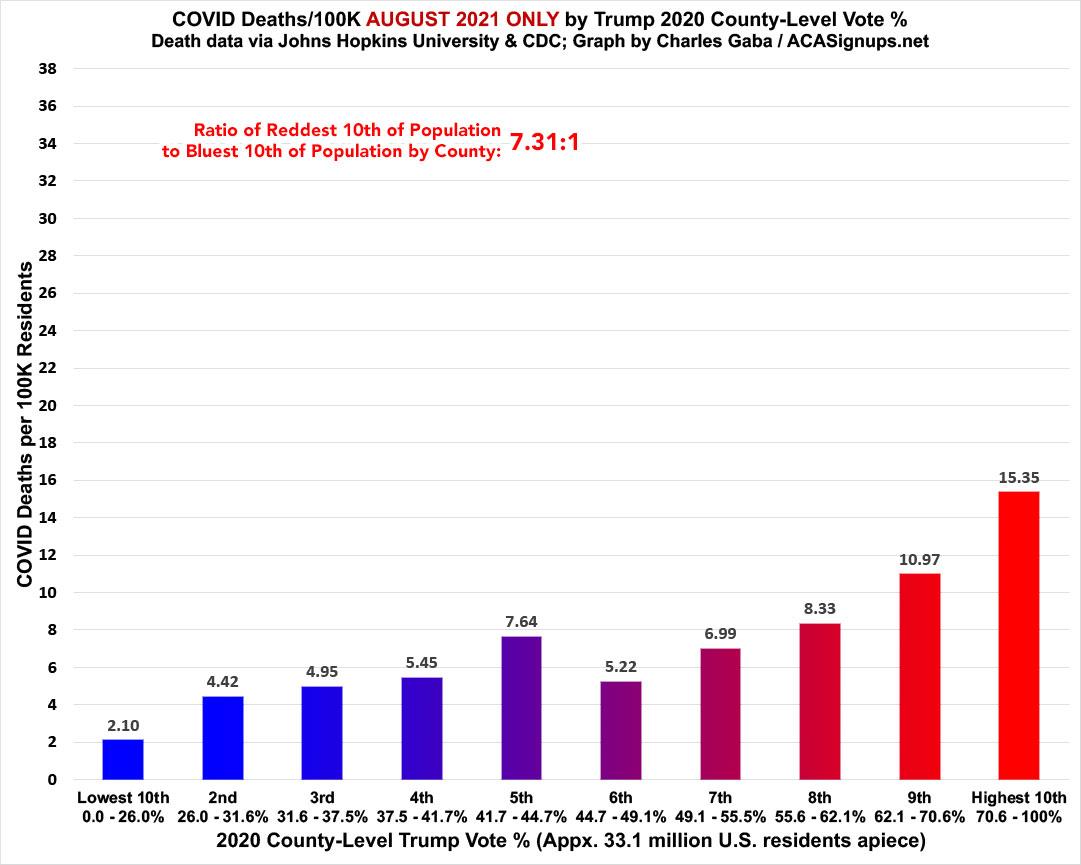 The next thing to note is that September has been by far the ugliest month of the Delta wave to date (so far). Over 65,000 Americans died in September 2021. The reddest bracket was nearly 6.9x higher than the bluest: 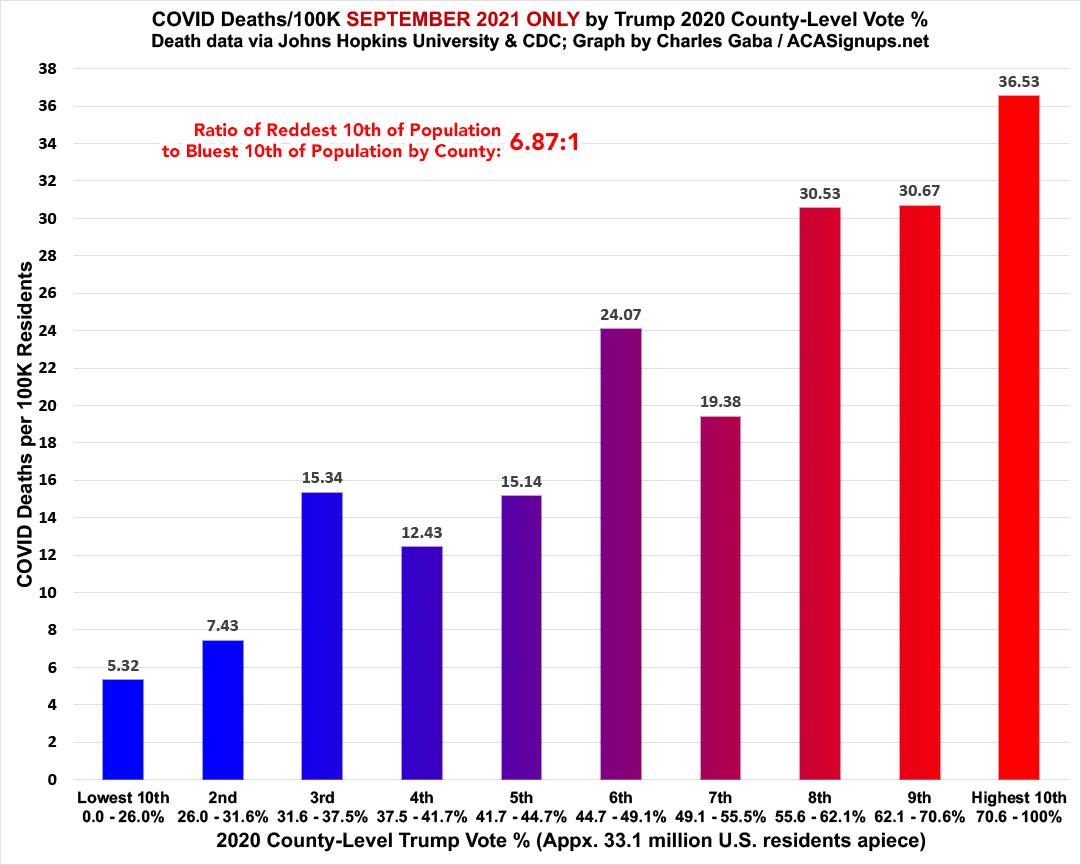 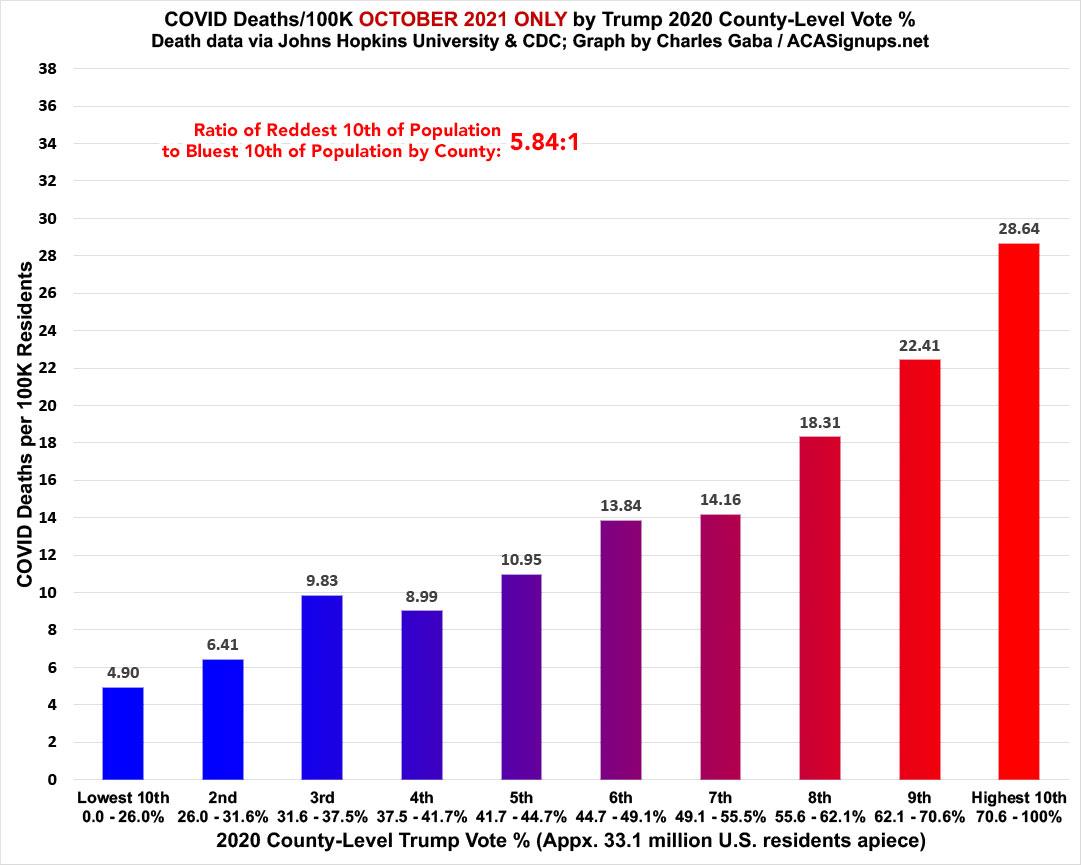 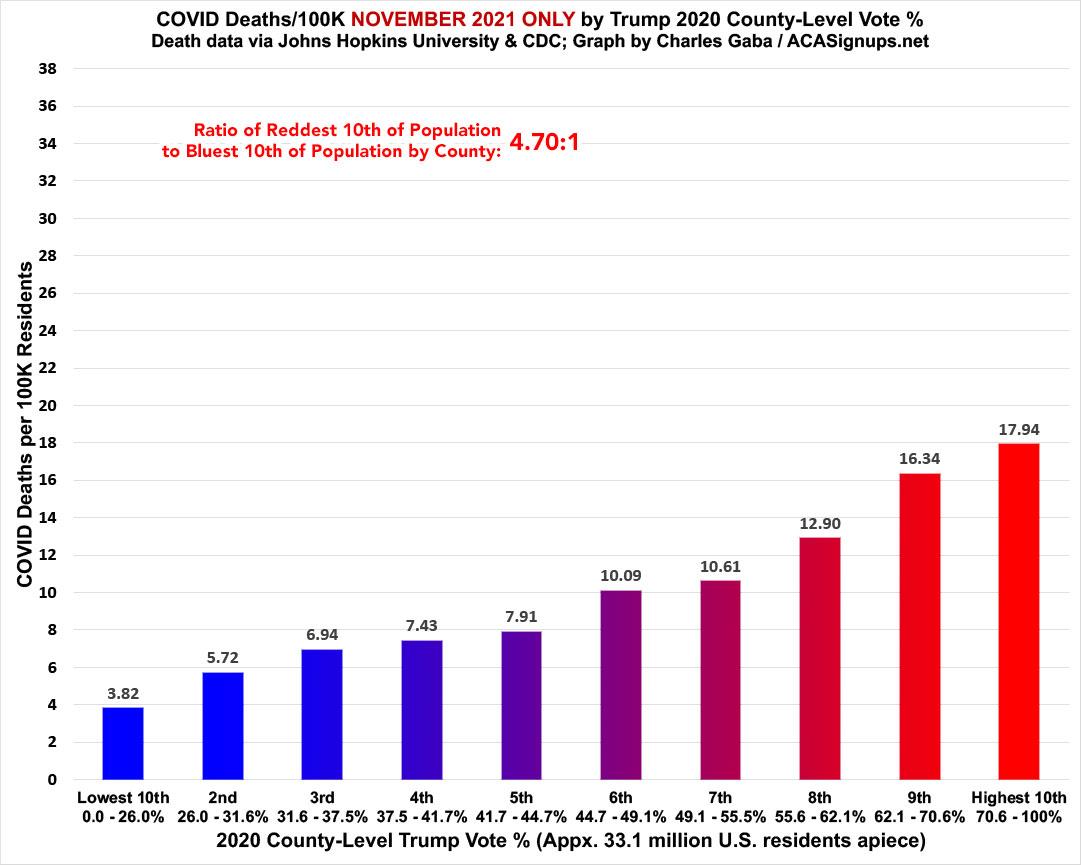 Finally, here's what it looks like for the first 2 weeks of December. Notice how, after the red/blue ratio dropped substantially from October to November (from 5.8x to 4.7x), it's since shot back up again for the first half of December:

Update 12/20/21: I've updated the December-only graph to run from 12/01 - 12/19. The gap isn't quite as steep as my projection from last week but the reddest bracket is still running 5.6x higher than the bluest bracket. 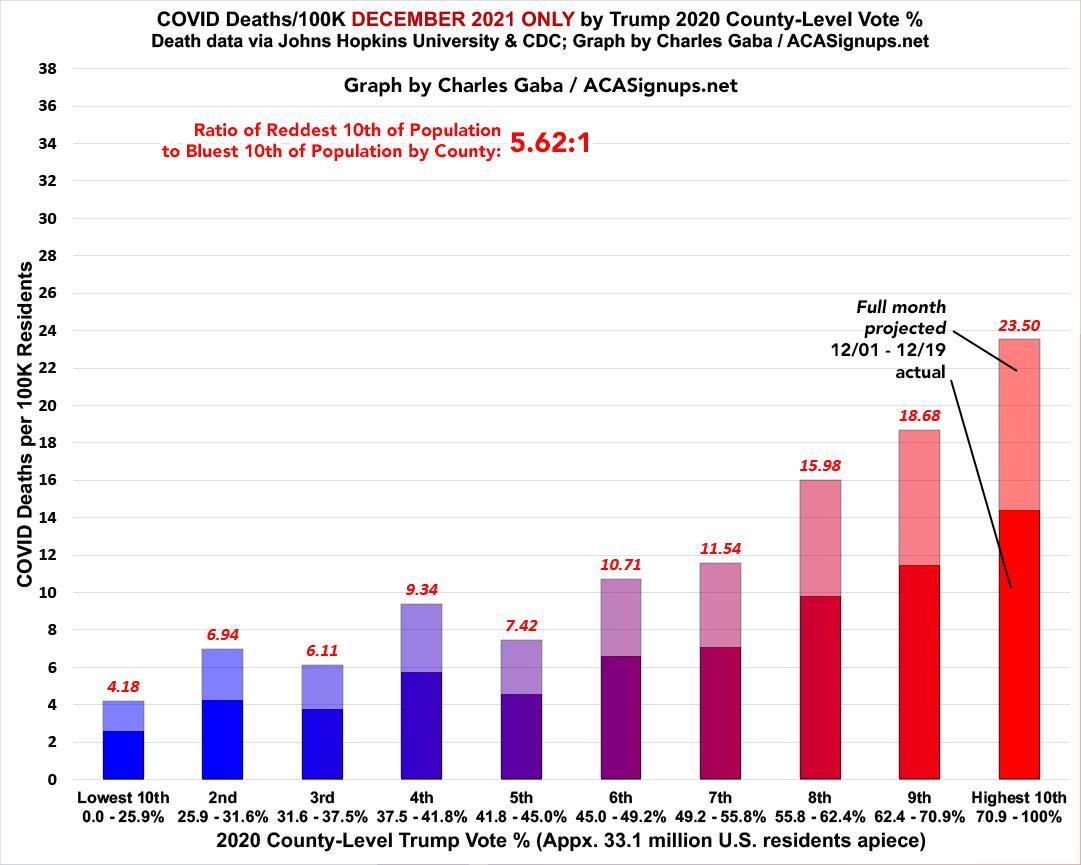