Woo-Hoo! CMS makes good on their promise: ALL rate requests now posted (even below 10%)

Last June, when the CMS division of the HHS Dept. launched their new Rate Review searchable database, I was simultaneously extremely satisfied and utterly frustrated with it.

As I noted a year ago:

...in terms of following the requirements of the HHS Dept, it's very useful for people to look up their particular company in their state, see what their "average" rate increase request is and submit cranky public comments (which will in most cases probably be ignored, but hey, you never know).

Legally speaking, I believe they're only required to post and accept public comments on rate hike requests over 10%. However, not even displaying the under-10% hikes was a huge problem for two reasons. First, it makes it that much more difficult for data nerds like me to put together properly weighted averages for each state. Just as importantly, however...

there's a slew of reporters, pundits and activists who are going to be poring over these rate filings...and by only listing those higher than 10%, the HHS Dept. is setting themselves up for a whole bunch of OMG!!! SKY IS FALLING!!! CRAZY HIGH RATE SPIKES FOR 2016!! headlines over the next week or so.

...which is exactly what ended up happening. The truth is that last year, many insurance policies only went up by single digits, and in a few cases they actually lowered their rates. However, you never saw any of those if you only used the official Rate Review site at HC.gov as your guide. In the end, the overall average increases on the individual market ended up being around 11-12% nationally, and the effective increase (after people shopped around, switched plans, etc) came in at only 8% at full price.

Now, it is true that this year, rate hikes will almost certainly be higher than last year...at the moment I'm tracking requests at just under 15%, but once the rest of the states are plugged in it'll probably be closer to 20% requested. Even so, there are still a lot of carriers keeping things in the single digits (or even negative in a few cases), so this is still a big perception problem.

Last November, CMS opened themselves up to suggestions for the upcoming enrollment season, and the #1 request made by myself (and likely others) was to add all of the rate requests to the RR database--whether over 10%, under 10% or below 0%.

Well, as it happens, shortly after that, they stated that they would, indeed, start doing just that for 2017. There was some confusion about whether I was misreading the new policy or not, but I'm happy to report that sure enough, if you plug Indiana into the Rate Review site (and pick 01/01/17 as the starting and ending dates), you'll see the following (I've sorted them by requested rate increase, lowest to highest): 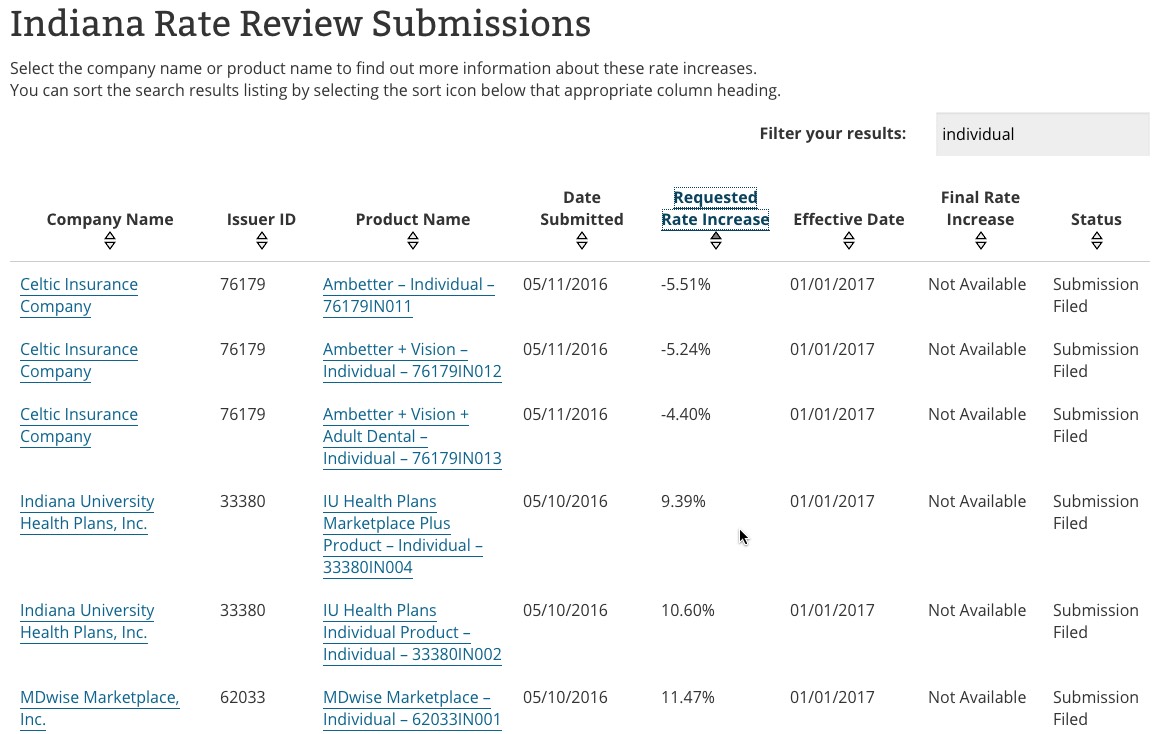 Yup...Celtic is dropping their rates by 4-5% next year, as shown. Indiana University is hovering around the 10% mark, but at least some of their policies are just below that threshold. The others are higher than 10% (the very highest, for some of Anthem BCBS's plans, are asking for an ugly 33.8% increase, for what it's worth).

Anyway, this still doesn't make the other half of the equation (tracking down the current membership for each carrier) any easier, but it's still a huge improvement over last year in terms of transparency and PR.

It's not just Indiana, either. Most of the state filings haven't been plugged into the Rate Review database yet, but Florida is showing some sub-5% hike requests as well, for instance: