Today, the Biden-Harris Administration announced that a record-breaking more than 16.3 million people have selected an Affordable Care Act (ACA) Marketplace health plan nationwide during the 2023 Marketplace Open Enrollment Period (OEP) that ran from November 1, 2022- January 15, 2023 for most Marketplaces. President Biden promised to strengthen and build on the Affordable Care Act, and this year, the 10th year of ACA Open Enrollment, more Americans signed up for high-quality, affordable health insurance through the ACA Marketplaces than ever before. Since President Biden took office, the number of people who have signed up for an affordable health care plan through HealthCare.gov has increased by nearly 50%. Because of the President’s plan, millions of working families saved an average of $800 on their health insurance premiums last year.

Note: It's buried at the bottom as a footnote (as usual), but in addition, over 1.14 million New Yorkers have enrolled in Basic Health Plan policies. While the footnote doesn't include Minnesota's BHP enrollment, the MN DHS website lists January enrollment as 103K.

Combined, that's over 17.5 million Americans who've signed up for either a Qualified Health Plan (QHP) or Basic Health Plan (BHP) nationally so far...and again, that's only through either January 15th (or Jan. 14th in some states). Open Enrollment continues through January 31st in California, DC, New Jersey, New York and Rhode Island, so the final tally (w/BHPs) could end up being as high as 17.6 million.

“Unprecedented investments lead to unprecedented results,” said HHS Secretary Xavier Becerra. “Thanks to President Biden’s leadership, more than 16 million Americans have health insurance through the Affordable Care Act Marketplaces – an all-time high. The Biden-Harris Administration has made lowering health care costs and expanding access to health insurance a top priority – and these record-breaking numbers show we are delivering results for the American people. We will keep doing everything we can to ensure more people have the peace of mind that comes with high-quality, affordable health care.”

The 13% year/year increase refers to QHP enrollment only...but BHP enrollment in NY & MN are around 13% higher than last year as well, so there you go.

“President Biden promised to build on the success of the Affordable Care Act and make it easier for people to enroll and find affordable, quality coverage – and that promise has been kept,” said CMS Administrator Chiquita Brooks-LaSure. “On the tenth anniversary of the ACA Marketplaces, the numbers speak for themselves: more people signed up for plans this year than ever before, and the uninsured rate is at an all-time low.”

The Biden-Harris Administration has made expanding access to health insurance and lowering health care costs for America’s families a top priority, and under their leadership, the national uninsured rate reached an all-time low earlier this year, and the 2023 Marketplace Open Enrollment Period saw the highest number of plan selections of any year since the launch of the ACA Marketplaces ten years ago.

This year, individuals benefited from a highly competitive Marketplace. Ninety-two percent of HealthCare.gov enrollees had access to options from three or more insurance companies when they shopped for plans. Also, new standardized plan options were available in 2023 through HealthCare.gov, which helped consumers compare and select plans. Thanks to the Inflation Reduction Act, more people this year continued to qualify for help purchasing quality health coverage with expanded financial assistance, resulting in four out of five people returning to HealthCare.gov being able to find a plan for $10 or less after tax credits.

Individuals who meet certain conditions may be eligible for a Special Enrollment Period (SEP) and can determine if they qualify by visiting HealthCare.gov, or CuidadoDeSalud.gov, or by calling 1-800-318-2596.

** In addition to reported plan selections, New York and Minnesota have a Basic Health Program (BHP), which generally provides coverage to consumers with household incomes up to 200 percent of the FPL who are not eligible for Medicaid or CHIP and otherwise would be eligible for a QHP. From November 1 – January 14, 2023, New York had a total of 1,114,406 individuals enroll in a BHP. Minnesota’s BHP data was not available at the time of this report.

Here's the 2023 vs. 2022 comparison, but it's important to keep in mind that there's still up to 17 days of enrollment data missing from some of the 18 state-based exchanges: 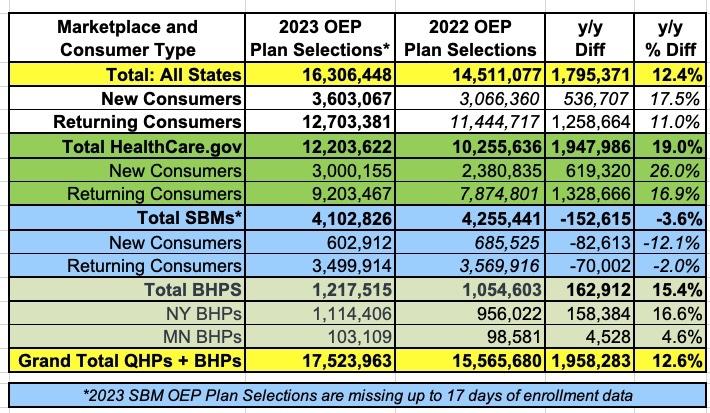 As a side note, this is pretty damned close to what I said a few weeks ago:

Again, there's still time left for people to sign up in every state except Idaho, which ended Open Enrollment on December 15th. Assuming the ~13% y/y increase holds through the final end of OEP in every state on January 31st, that would put total QHP + BHP enrollment at nearly 17.6 million nationally when the dust settles, or roughly half a million higher than today's tallies.

Again, Open Enrollment is still going on for another 6 days in CA, DC, NJ, NY & RI, so it might end up hitting that 17.6M grand total after all (or at least come very, very close to it).

Here's the state-by-state breakout. I've added rows for the BHP programs in MN & NY at the bottom: 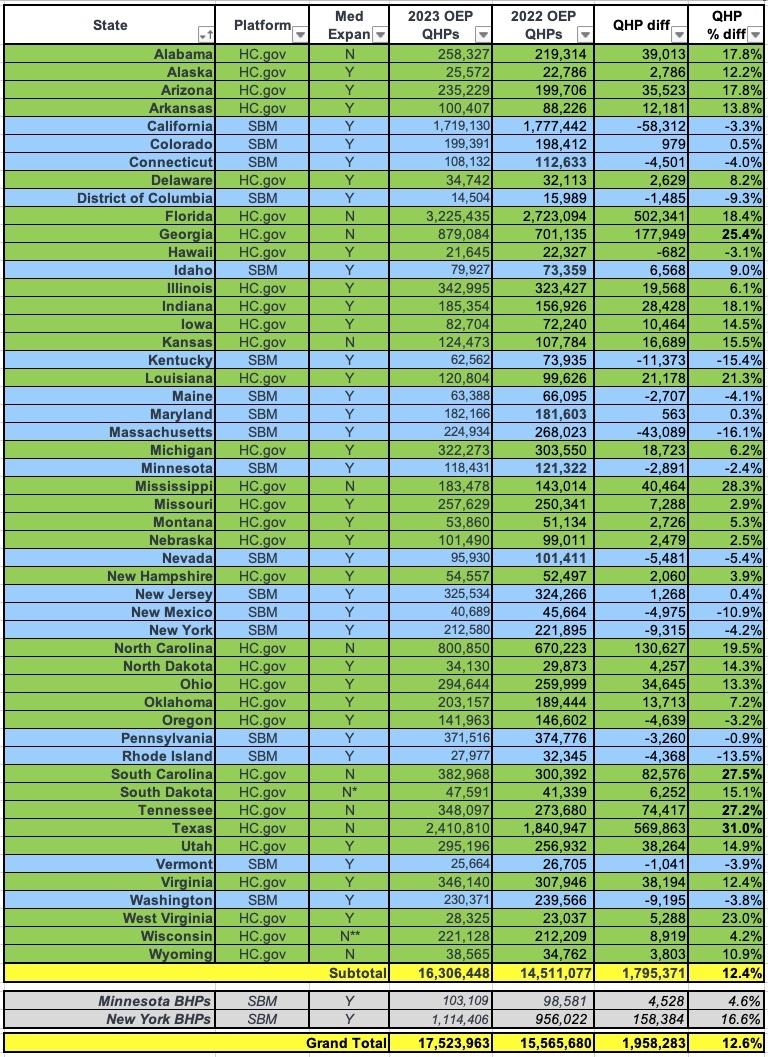 Here's the state-level data grouped by federal exchange vs. state-based exchange, as well as Medicaid expansion/non-expansion. Keep in mind that South Dakota's expansion hasn't gone into effect yet, and Wisconsin has an alternate partial expansion up to the federal poverty line. Also keep in mind, again, that many of the SBM states still have up to 17 days of data missing:

As you can see, while SBM states are ~3.6% behind last year (again, with 2023 enrollment data missing for some of them), they're actually slightly ahead of last year when BHP enrollees are included. FFM states, meanwhile, are up 19% over last year (that data is final for both years).

When you break the FFM states out between expansion/non-expansion status, the former are up 9.9% overall, while the latter are, again, up 22.7%

Other points of interest:

Here's what the cumulative enrollment in all three categories (FFM, SBM, BHP) look like visually: 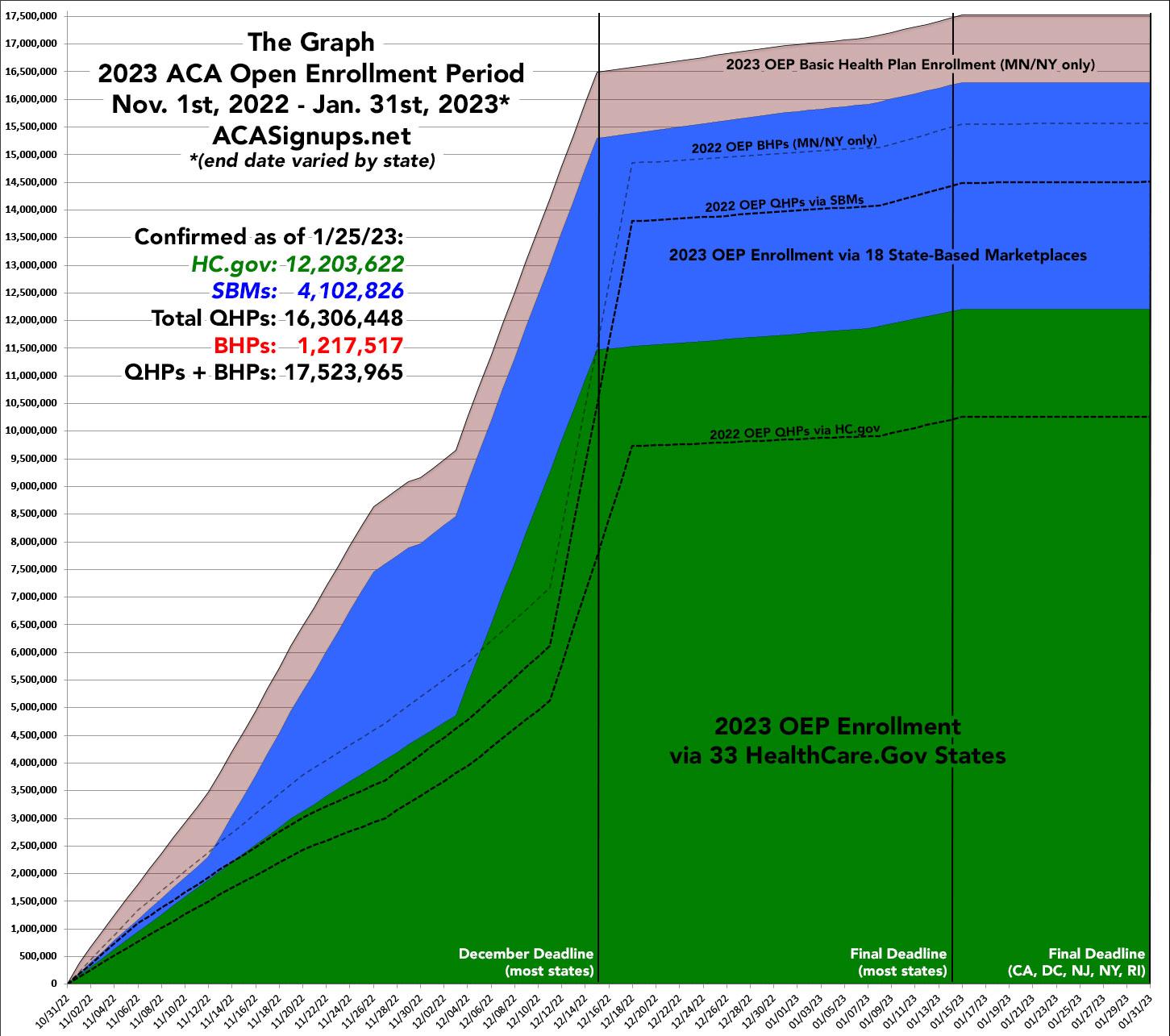