Virginia has an extremely robust, competitive individual & small group insurance market...and in 2023 it's getting even more competitive, with what appear to be two new carriers joining the individual market (Aetna Health Inc. and Anthem EPO), although Anthem is only offering off-exchange policies (why??) while Bright Health Insurance appears to be dropping out of the individual market (which is a common theme for Bright this year...)

Virginia used to be one of the first states to release their preliminary rate filings for the upcoming year, but for the past year or two it's been among the later ones. I don't know how much of this is due to COVID-related issues or if it's just an internal policy change for some other reason. Regardless, as a result, VA also happens to be the first state to release their annual rate filings since the Inflation Reduction Act (which includes a 3-year extension of the enhanced ACA subsidies) passed both the U.S. House and Senate.

Having said that, I'm pretty sure these filings still reflect the pre-IRA world, since most of the forms appear to have been submitted to the SERFF database back in May. Plus, President Biden didn't actually sign the bill into law until a few days ago, so any filing changes based on it couldn't actually be officially considered until after that happened.

Instead, the most significant thing to impact Virginia carriers 2023 filings is the state's Section 1332 Reinsurance Waiver. I wrote about this way back in 2018 when the state was originally considering applying for one, but it sounds iike it didn't actually go through until 2021 and doesn't actually go into effect until this January:

During 2021, the Virginia General Assembly passed HB 2332, the Commonwealth Health Reinsurance Program, which was signed into law on March 31, 2021 as Chapter 480, of the 2021 Virginia Acts of Assembly. This bill requires the State Corporation Commission to submit a waiver request for federal approval to establish a reinsurance program beginning January 1, 2023.

Section 1332 of the Affordable Care Act permits a state to apply for a State Innovation Waiver (also referred to as a section 1332 waiver) to pursue innovative strategies for providing residents with access to high quality, affordable health insurance while retaining the basic protections of the ACA. The program also provides pass-through funding to the state for federal savings from approved initiatives.

The proposed reinsurance program would be funded through state general funds and federal pass-through funding provided under the waiver. It would reimburse carriers in the individual health insurance market for a proportion of the claims of covered individuals with high annual costs. The program is designed to increase affordability in the individual market with a statutory goal of decreasing premiums by up to 20 percent.

...On May 18, 2022, federal reviewers issued a letter approving Virginia’s State Innovation Waiver application to establish the Commonwealth Health Reinsurance Program (CHRP) for an initial period of up to five years, beginning in 2023. Per enactment language, the remaining Virginia statutes establishing the CHRP will become effective on June 17, 2022, 30 days after the Commission provided notice of federal approval.

The CHRP is designed to operate as a traditional reinsurance program by reimbursing ACA individual market health insurers for a percentage of an enrollee’s claims costs exceeding a specified threshold (or “attachment point”) and up to a specified ceiling (or “reinsurance cap”). Specifically, in 2023, the approved program would reimburse claims between an attachment point of $40,000 and an estimated $155,000 cap with a coinsurance rate of 70%. This program is projected to reduce individual premiums in the ACA marketplace by 15.6% for plan year 2023.

Here's my reinsurance explainer. It sounds like Virginia's is pretty typical.

However, it doesn't look like it's going to have quite as dramatic an impact on unsubsidized rates in 2023 as they had hoped at the time; on average, unsubsidized premiums are expected to drop by around 13% rather than the 15.6% anticipated in the waiver application.

On the other hand, these are still only preliminary filings; they might be further reduced after regulatory review...and of course the fact that the IRA was passed and signed into law means that the enhanced subsidies will continue for at least three more years, which itself should have some impact on the final rate filings.

One other small factor: There's a bit of confusion on the actual average rate change for four of the carriers (CareFirst BlueChoice, GHMS, Kaiser and Optima Health), all of which show different average reductions in the actual filing forms than are shown on the federal rate review website.

Meanwhile, the small group market in Virginia doesn't appear to have any such drama going on; 2023 premiums will go up an average of around 6.4%, assuming the filings are approved as is. 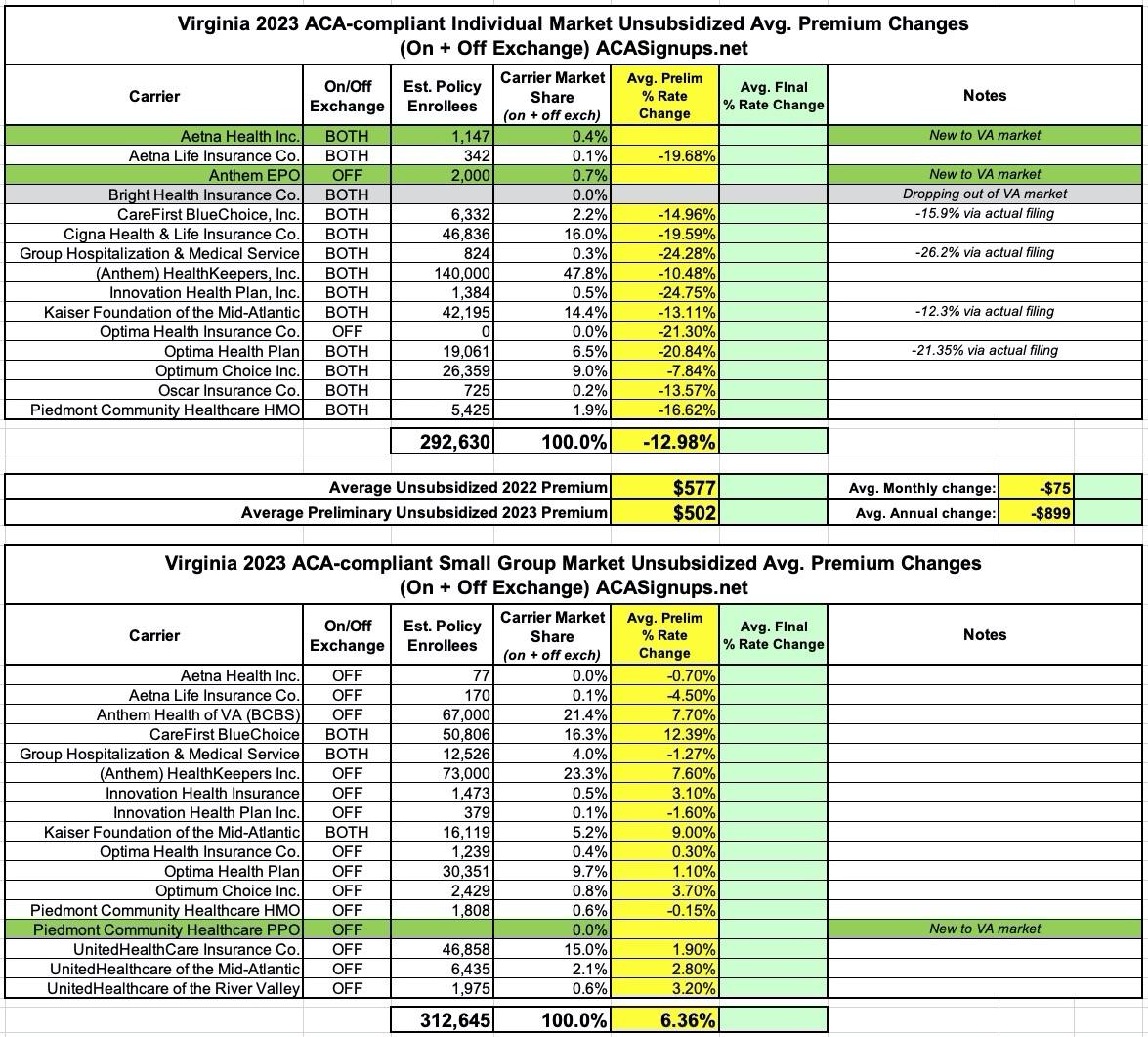 UPDATE 10/17/22: Hmmm...according to this 2023 VA ACA rate filing presentation powerpoint, it looks like the final VA rates are nearly identical to the preliminary rates requested...on the individual market, only Kaiser and Oscar saw any significant changes, and on the small group market only Anthem's divisions had their requests modified. As a result, the final 2023 weighted average rate changes are -12.9% and +7.0% respectively: 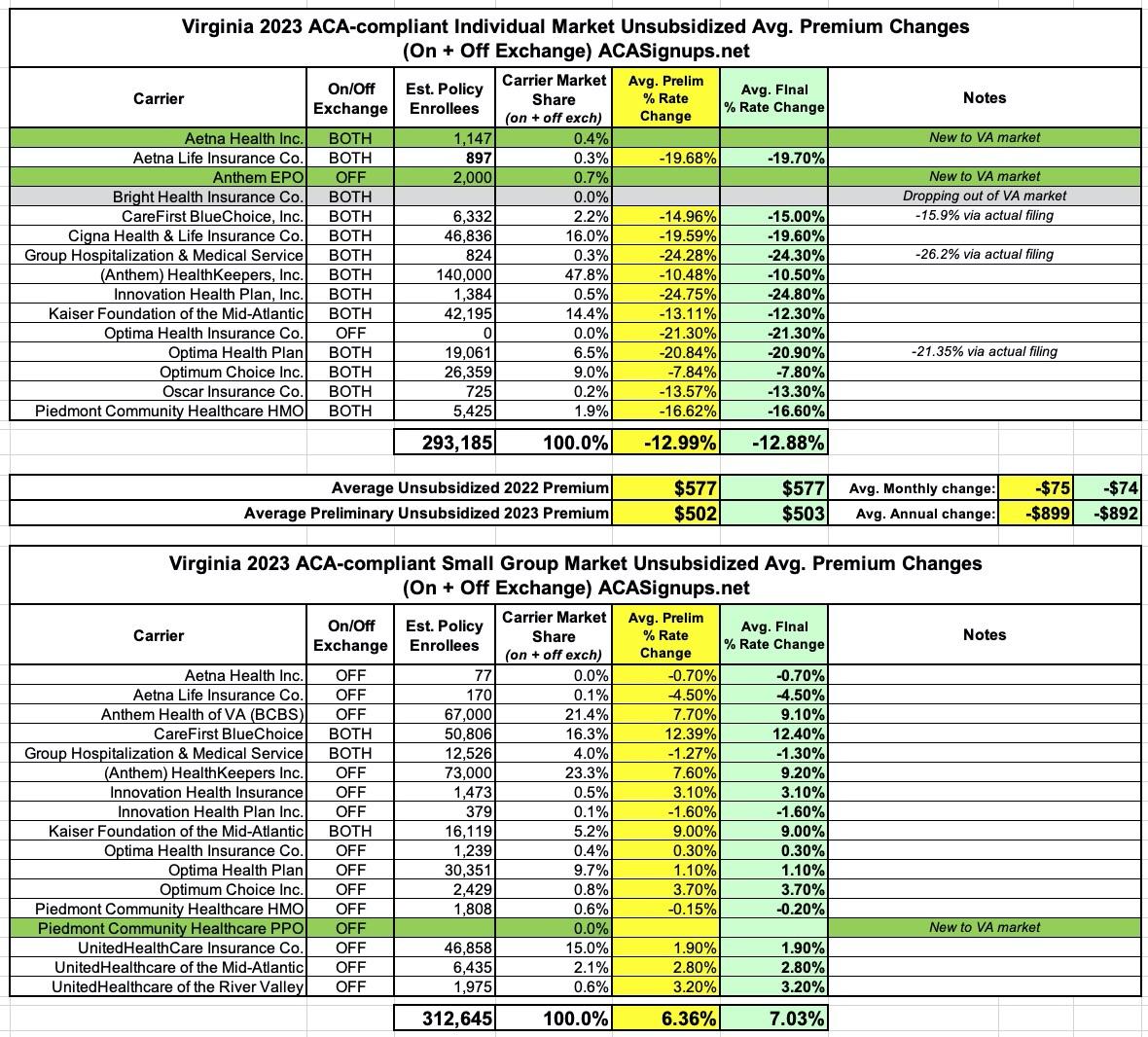