How much does the #IRA lower YOUR health insurance premiums? A case study in Virginia. 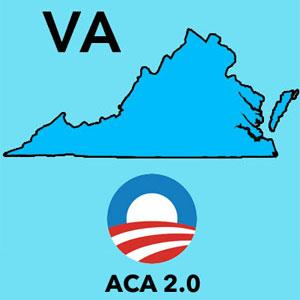 Back in 2019, long before the American Rescue Plan passed, I embarked on an ambitious project. I wanted to see what the real-world effects would be of passing a piece of legislation which would eliminate the Affordable Care Act's so-called "Subsidy Cliff" while also strengthening the subsidy formula for those who qualified. Call it "ACA 2.0" for short, if you will (that's what I do, anyway).

This legislation has been around in near-identical form under one official title or another for years, usually bundled within a larger healthcare package. In 2018 it was called the "Undo Sabotage & Expand Affordability of Health Insurance Act of 2018" (or "USEAHIA" which is about as awkward a title as I can imagine.

In 2019 it was rebranded as the "Protecting Pre-Existing Conditions and Making Healthcare More Affordable Act" or "PPECMHMAA," which somehow managed to be even more awkward.

In 2020, after Democrats had retaken control of the House of Representatives, the third version of the larger bill managed to actually pass the House under the more reasonable title of the Patient Protection and Affordable Care Enhancement Act. Of course it didn't even get a vote in the Senate.

In early 2021, however, a temporary version of this bill, sponsored primarily by Rep. Lauren Underwood, was included in the American Rescue Plan (ARP), passed both the House & Senate on a party-line vote and was signed into law by President Biden. It finally accomplished what all of the prior versions were hoping to, with one caveat: It sunsetted after just two years...i.e., the end of December 2022.

Thankfully, a couple of weeks ago, Senate Democrats and then House Democrats passed the Inflation Reduction Act (IRA), which was formally signed into law by President Biden on April 16th. Along with all the other provisions, the IRA also included a three-year extension of the ARP's enhanced & expanded ACA subsidies, through the end of 2025.

Here's a table which compares the original ACA subsidy formula against the enhanced/expanded subsidies included under the ARP/IRA: 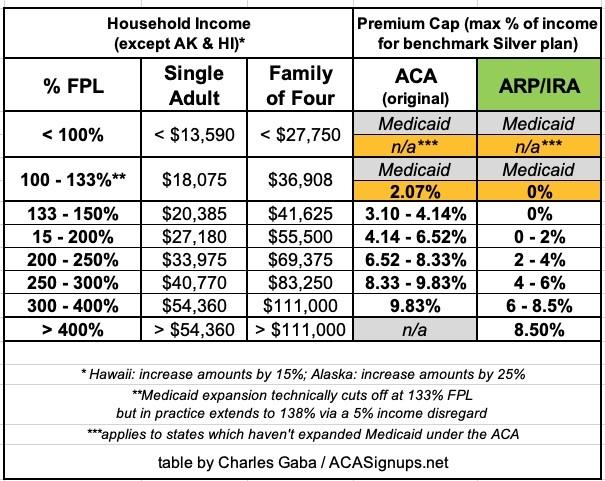 While the improved subsidies still aren't permenent, this should at least set at ease the minds of 13 million Americans enrolled in ACA exchange policies for the next three years.

Now that the ink has finally dried on the IRA, I decided to go back to my original project to see how much some representative households will save in health insurance premiums in 2023 thanks to the extended finacial assistance.

Insurance policy carriers, premiums, networks and so forth vary widely from state to state and even county to county. In this case study, I'm using Spotsylvania County, Virginia.

Similar to how I did a few years back, I'm using six different households at different income levels:

IMPORTANT CAVEAT: All of the calculations in the examples below are based on 2022 data. The Federal Poverty Level (FPL) for the various housholds increases slightly every year, and the unsubsidized premium price of the benchmark Silver policy tends to change from year to year...sometimes higher, sometimes lower. In Virginia specifically, unsubsidized premiums are expected to be around 13% lower overall next year, though this doesn't necessarily mean that the benchmark Silver price for Spotsylvania will be.

With all of that said, let's take a look at the six households. The benchmark Silver plan in all cases in 2022 is the Kaiser Permanente KP VA Silver Virtual Forward 4000, which has a $4,000 deductible and an $8,550 maximum on out-of-pocket (MOOP) expenses for in-network care.

Under the original ACA subsidy formula, if they earn $20,000/year, they have to pay $73/month...but under the Inflation Reduction Act, they pay just $5/month in premiums after the enhanced subsidies are applied.

In addition, thanks to the ACA's Cost Sharing Reduction provision, that $4,000 deductible is chopped down to just $750, and their MOOP is reduced to just $2,500/year.

Once you get over around $55,000/year, there's no subsidy difference, however, since the full price premium never hits more than 8.5% of their income at that income level anyway. 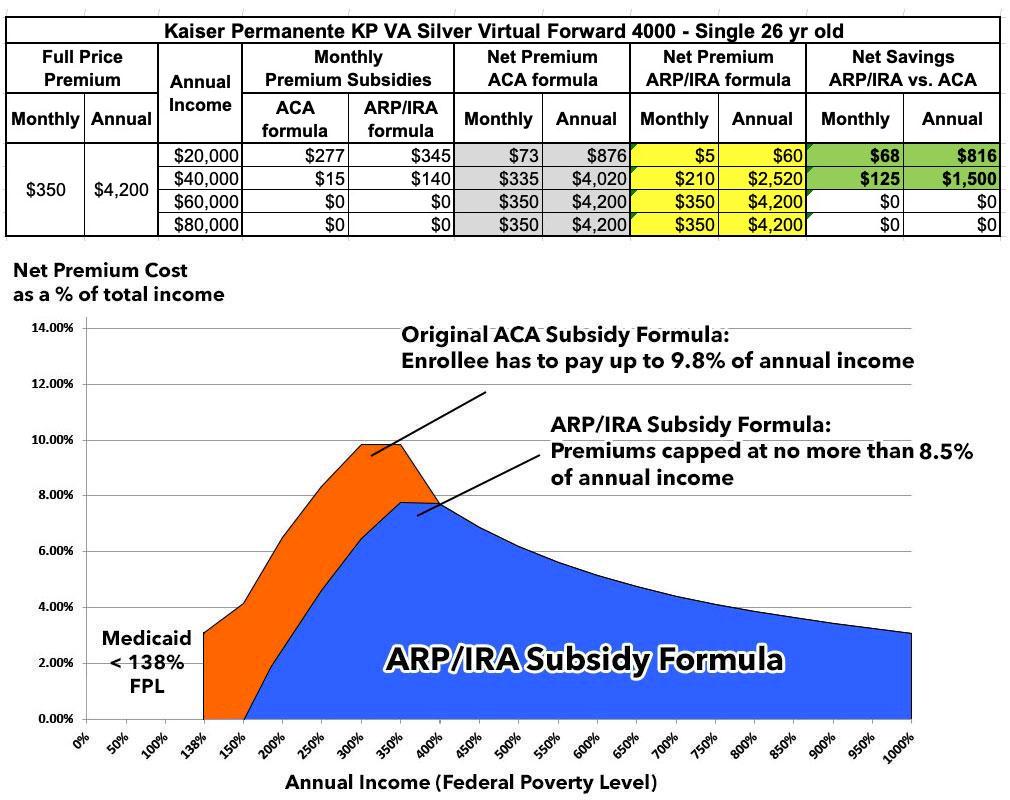 However, things are different at the $60,000 and $80,000 level: Since the full-price premium is considerably higher for a 50-yr old vs. a 26-yr old, the enhanced subsidies of the IRA make a dramatic difference when you move over the 400% FPL threshold...the dreaded "Subsidy Cliff" of the original ACA formula which cut subsidies off entirely for households which earned more than 4x the poverty level. 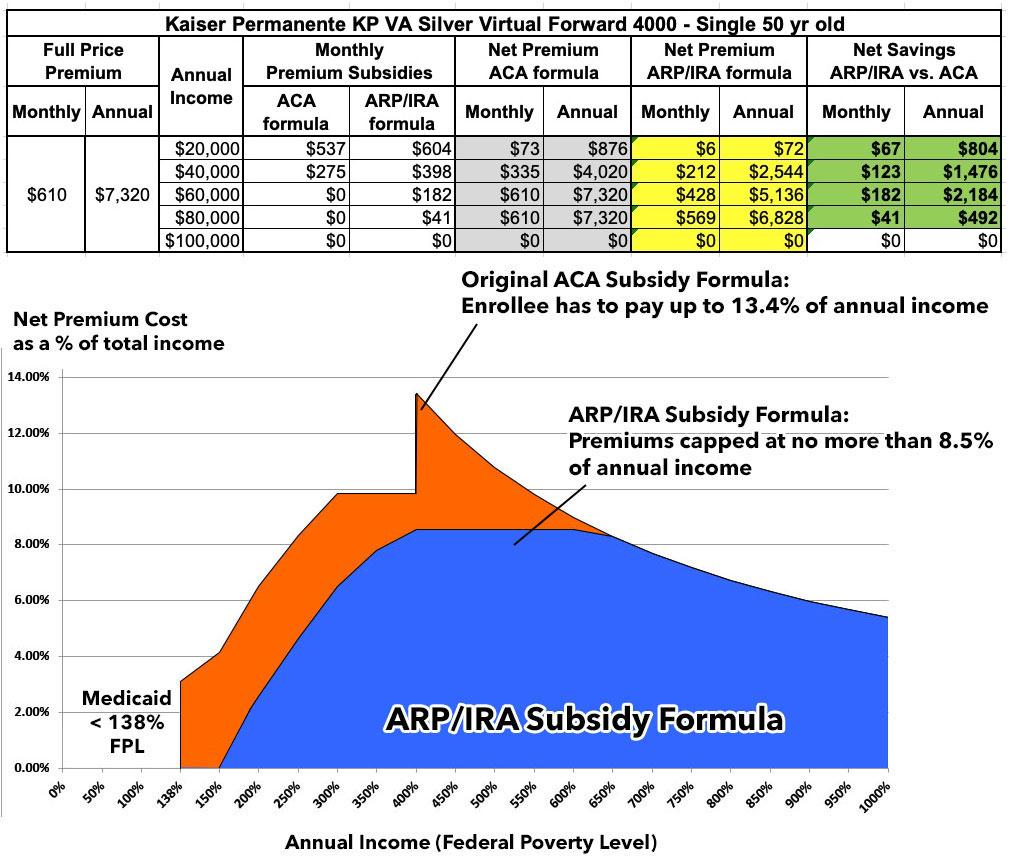 What about a single 64-year old, though? They don't quite qualify for Medicare yet but still need solid healthcare coverage.

At full price they'd have to pay over $1,000/month. That's over $12,000/year. The good news is that the original ACA subsidy formula ensured that healthcare premiums would at least be within reason for single adults earning up to around $54,000/year. The bad news, prior to the 2021, if you earned even one dollar more than the cut-off amount, you would lose all financial help and had to pay full price...which still amounted to over 22% of this enrollee's income at ~$55,000/year. The "subsidy cliff" turned into a chasm for those in their early 60's.

Thanks to the American Rescue Plan and the Inflation Reduction Act, however, the Cliff is gone. Instead, their premiums are capped at no more than 8.5% of income...saving them as much as $600/month or nearly $7,200/year in premium payments! This gradually tapers off as their income goes up, disappearing at around 11x the poverty level. 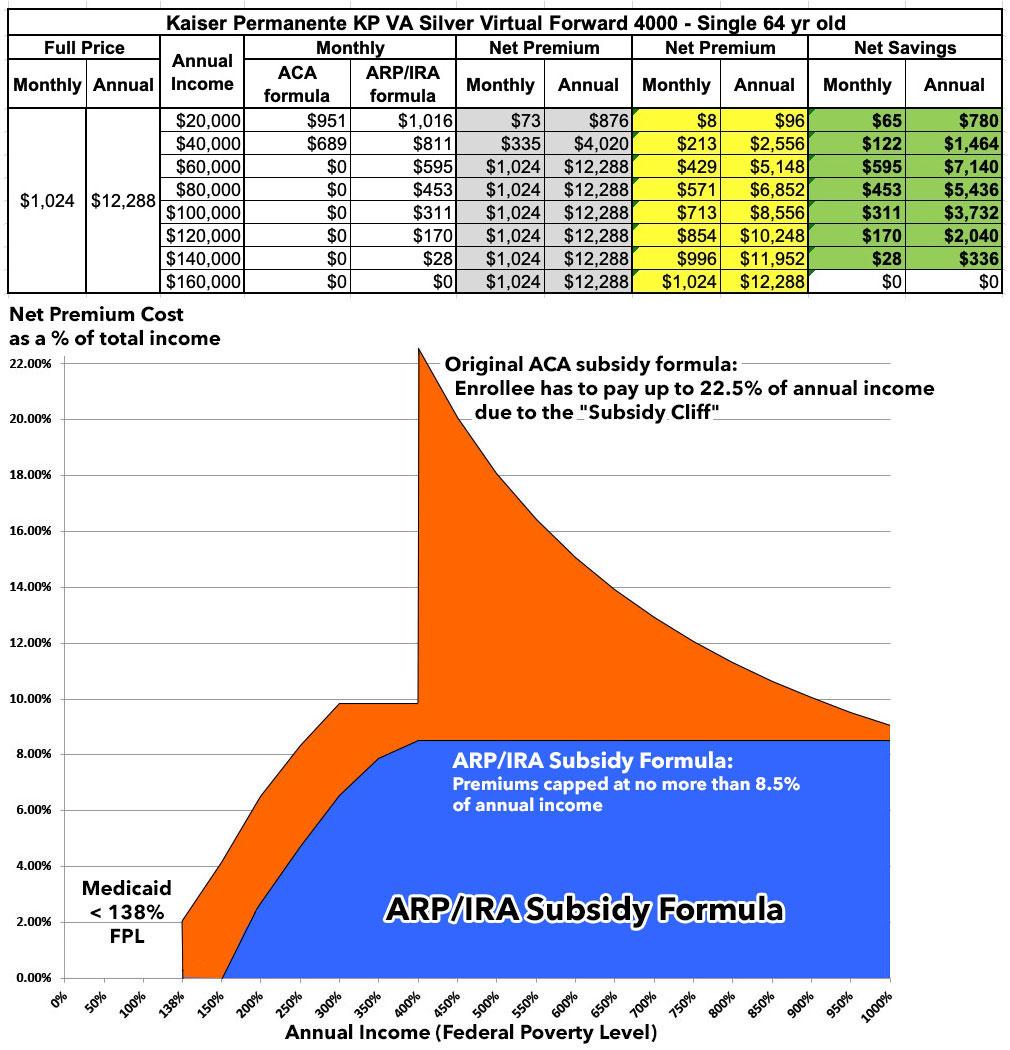 Now I'm going to move on to the multi-member households.

First up is the 30-yr old Single Parent with an 8-yr old child.

Things get slightly more complicated here because in Virginia, children are eligible for the CHIP program in households earning up to 200% FPL. This means that if the single parent earns around $26,000/year (~141% FPL), their child would be enrolled in CHIP while the parent would be eligible for a subsidized ACA exchange plan. The full-price premium therefore depends on whether it's covering just one person (the parent) or both parent and child.

In this scenario, the single parent goes from having to pay $68/month on a $26,000/year income to paying almost nothing under the enhanced subsidies of the IRA (a nominal $2/month).

At $75,000/year, they'd have to pay the full $611/month under the original ACA formula, but this drops to $496/month under the IRA. While the IRA has a hard net premium cap of 8.5% of income, this parent never actually sees that as even at full price they never pay more than 8% of their income anyway. 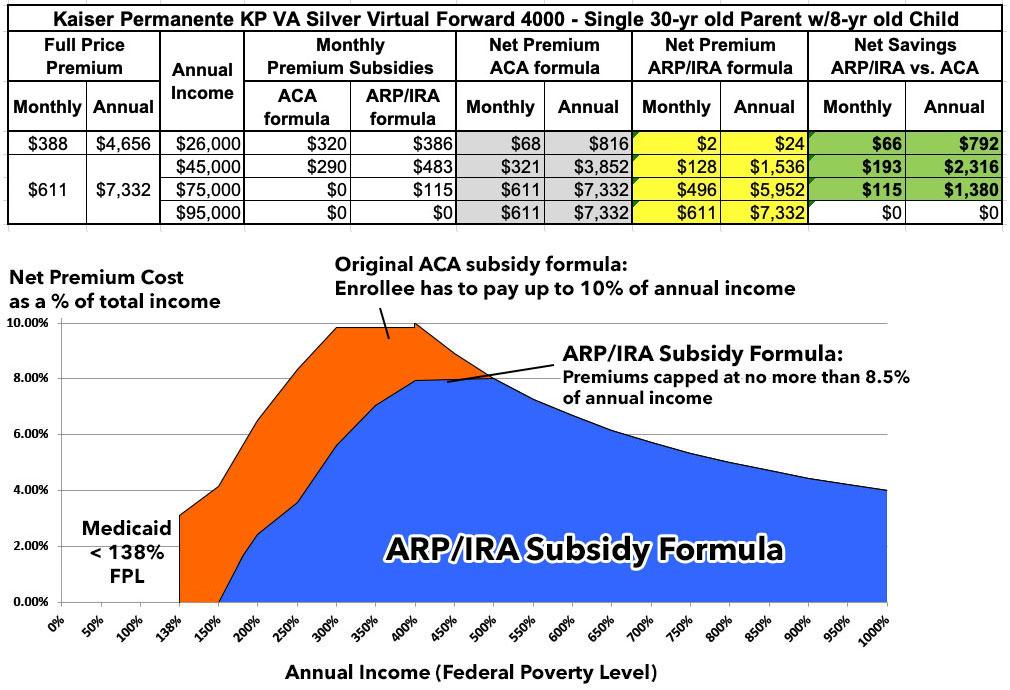 Again, the CHIP factor complicates this a bit; at $40,000/year, this family is only earning 144% FPL, which means the children both qualify for CHIP while the parents can get a heavily-subsidized ACA exchange plan. At full price the benchmark Silver policy would cost $873/month for just the parents, or $1,395/month for all four family members.

Thanks to the IRA's enhanced subsidies, this family saves thousands of dollars per year...the highest savings shown in the table is over $6,400 saved, but it could theoretically go as high as nearly $7,300 saved if the household happens to earn just over 400% FPL (a little over $111,000/year). At that income level, they'd go from paying 15% of their annual income to just 8.5%. 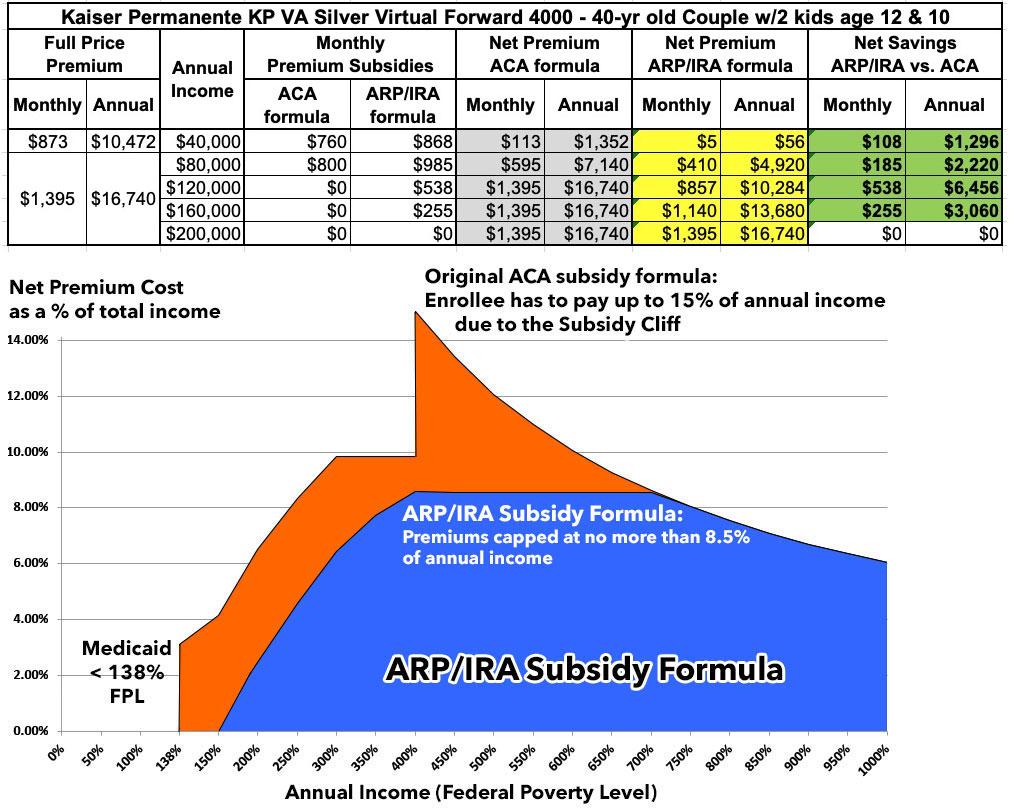 At full price, the benchmark Silver plan would cost over $22,000/year at that age...and at that level, the Subsidy Cliff isn't even a chasm anymore; it's a sheer freefall from the stratosphere. At just over 400% of the Federal Poverty Level, this couple would have had to pay over 30% of their entire annual income in premiums under the old subsidy formula, making it utterly unaffordable.

Thanks to the ARP/IRA improvements, they're now capped at no more than 8.5% of their income in net premiums...saving them as much as $16,000/year. That's not a typo. 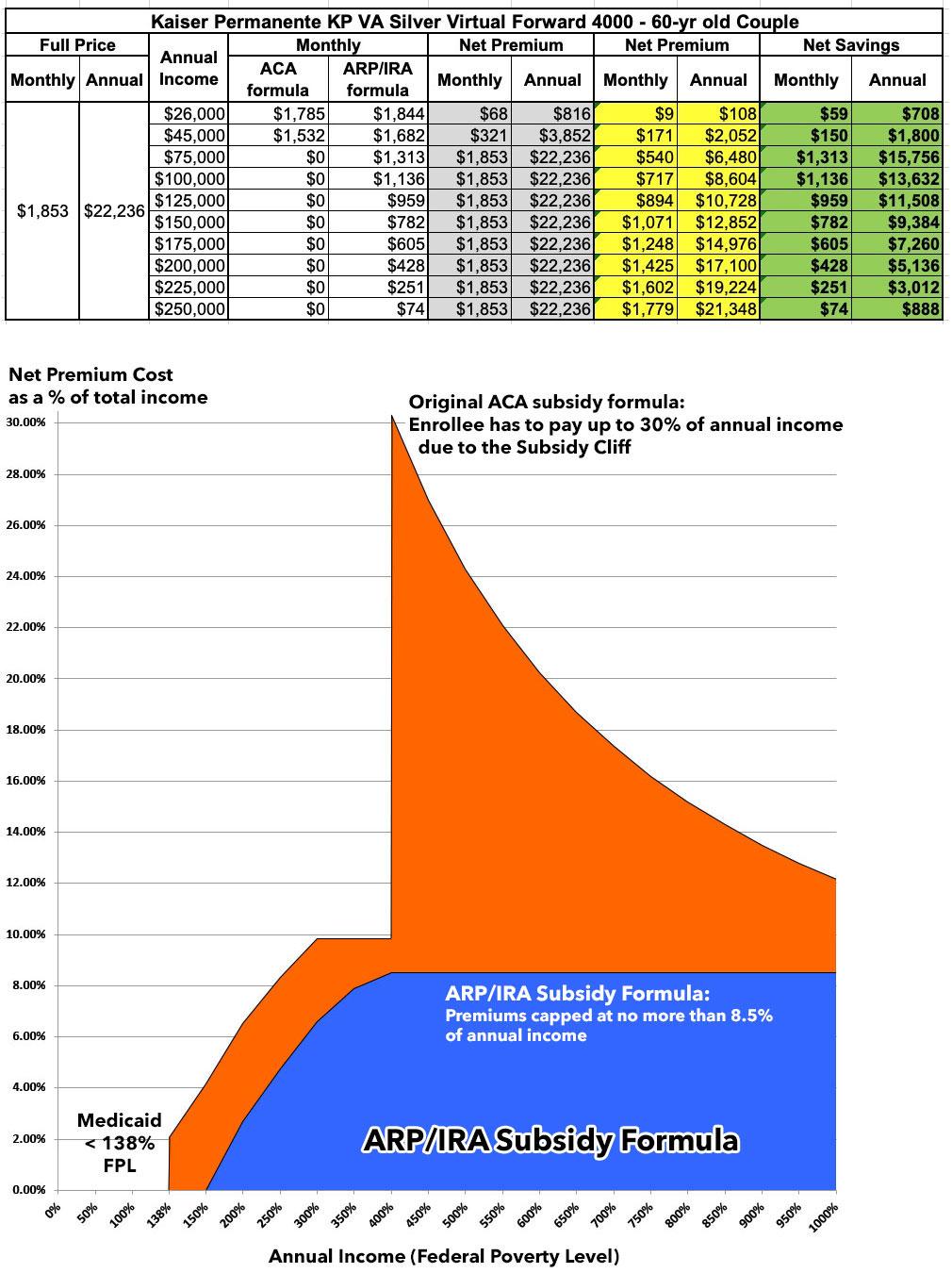