On Saturday, the 9th Anniversary of the Patient Protection and Affordable Care Act being signed into law, the news broke that on Tuesday, House Speaker Nancy Pelosi and other House Democratic leaders will be formally rolling out some sort of major "ACA 2.0" legislation:

While there may be some tweaks to the specifics, all evidence suggests that the bill in question will be last year's H.R.5155, the "Undo Sabotage and Expand Affordability of Health Insurance Act" from Rep. Frank Pallone, Richard Neal & Bobby Scott. It's a great bill with a terrible name, so I've shorthanded it to ACA 2.0 instead.

As I've noted several times before, assuming HR5155 were to somehow pass the Senate and be signed into law by Donald Trump intact (an extremely unlikely case, especially seeing how several provisions directly cancel out Trump's own sabotage efforts of the past two years), it would include over a dozen major provisions which would repair, protect and strengthen the ACA in various ways.

Some of these would have a more immediate and dramatic impact. Others wouldn't seem to have much effect initially, but would pay major dividends down the line.

UPDATE: For 2019, HR5155 has been broken out into a dozen or so smaller bills; the most important one, which I'm addressing here, is H.R. 1868, which has been re-introduced in 2019 by freshman Representative Lauren Underwood.

In this entry, I'm going to focus strictly on the single most important one of these, H.R. 1868, which only deals with premiums. This has nothing to do with deductibles or other types of out-of-pocket spending like co-pays or coinsurance; those are being dealt with separately. 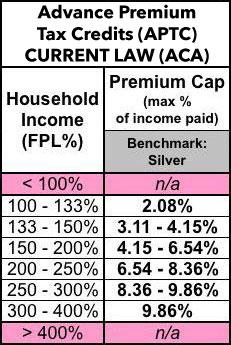 I say usually because it's not enough to earn 100-400% FPL; the other condition is that the benchmark Silver policy available on the exchange has to cost more than a certain percentage of your income, on the sliding scale shown on the left side above. Silver plans cover around 70% of average medical expenses.

In the first few years of the ACA, premiums were low enough that there were a lot of people who may have earned less than 400% FPL but still didn't qualify for APTC help because the benchmark Silver plan in their area cost less than the percentage above. For instance, a young adult earning $38,000 (around 315% FPL) would only qualify if the benchmark Silver plan cost more than $312/month (9.86% of their income).

The subsidy amount is whatever the difference between that and the unsubsidized premium is. In this case, if the benchmark plan cost $300/mo, they wouldn't qualify for any help. If cost $400/mo, they'd be eligible for around $88/month, or $1,056 per year.

Unfortunately, over the past few years, premiums have increased dramatically...and since older enrollees have to pay up to 3x as much as younger folks, the unsubsidized premiums shot up through the roof for people aged 50-64 years old. In fact, a single 64-year old living in Natrona County, Wyoming (which has the most expensive unsubsidized ACA-compliant individual market premiums in the country) would have to pay an insane $2,050/month at full price...or $24,600 per year.

The second problem with the current APTC formula is that it's simply not generous enough even for those who already qualify. H.R.1868 resolves both of these issues by:

Here's what the revised APTC formula would look like: 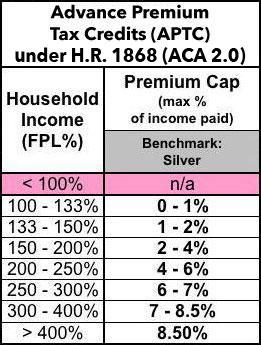 What does this look like in practice? I've whipped up four graphs below which show what typical benchmark Silver plans would cost a single adult at four different ages (30, 40, 50 and 60 years old). I'm basing this on HealthPocket's 2019 Average Market Premium analysis, which lists the average Silver premiums this year as:

On the one hand, these averages include all Silver plans, not just the benchmark plan. On the other hand, the Kaiser Family Foundation claims that the overall benchmark Silver average premium is $477/month in 2019, so the numbers above should be pretty close for this purpose. Obviously the actual unsubsidized premiums vary dramatically by state, region and carrier; Kaiser lists the lowest statewide average as Minnesota's $326 and the highest as Wyoming's $865. And of course a 64-year old's premium would be about 10% higher than the 60-year old, while a 21-year old's would be about 12% lower than the 30-year old.

With all that in mind, here's what the change would look like at all four ages. Remember, this is for a single adult, but the effect for a family would be similar. 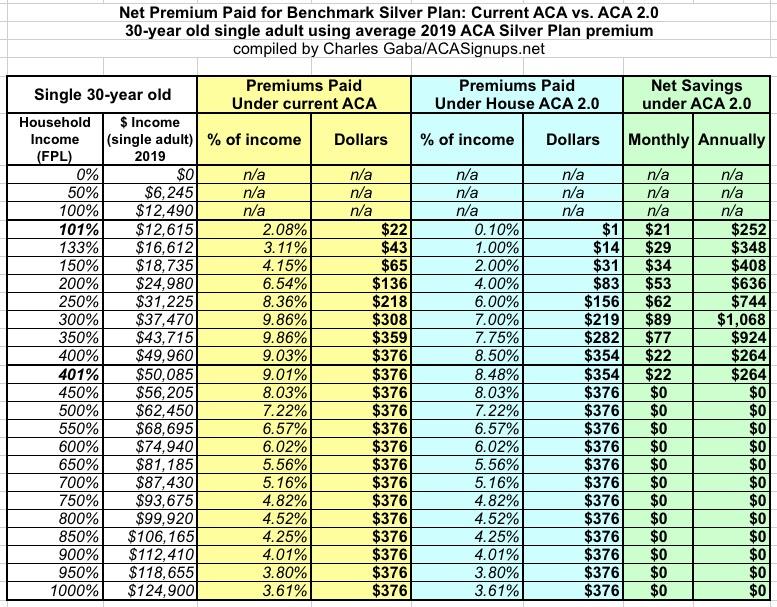 Here's what this looks like visually. It's important to note that while the upper limit subsidy cliff doesn't show up yet, the lower limit cliff is absolutely eliminated in states which didn't expand Medicaid. Remember, Medicaid expansion extends up to 138% FPL, so the 100-138% range isn't relevant in most states...but in the 14 states which didn't expand Medicaid, this would make a huge difference for people in that income range, because instead of premiums immediately kicking in at 2.08% of income, they gradually rise from nothing to around 1%. This means a savings of up to $30/month, which makes a major impact for people who only earn around $15,000/year to begin with. 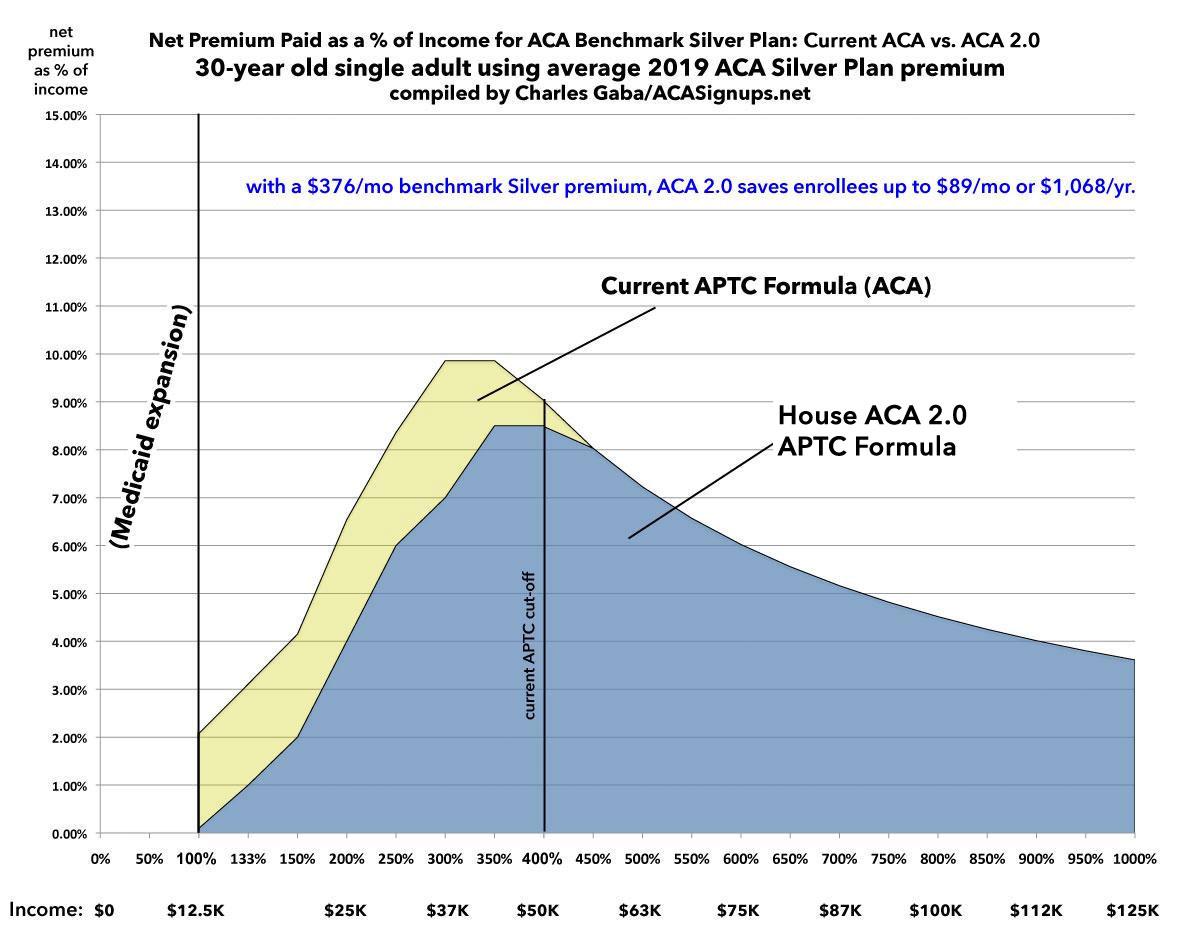 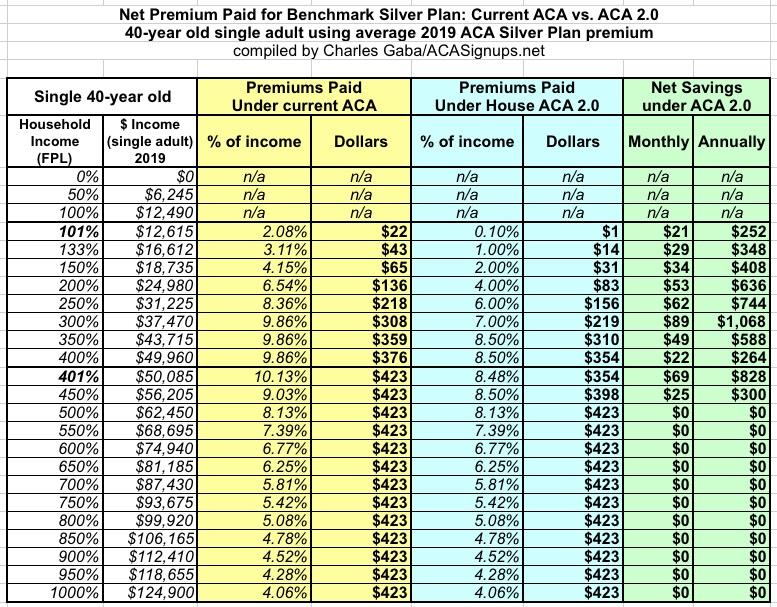 Visually, it doesn't look all that different from the 30-year old graph, but you can see where the 400% FPL subsidy cliff starts to rear its ugly head, peeking up just over the 9.86% surface like a shark fin: 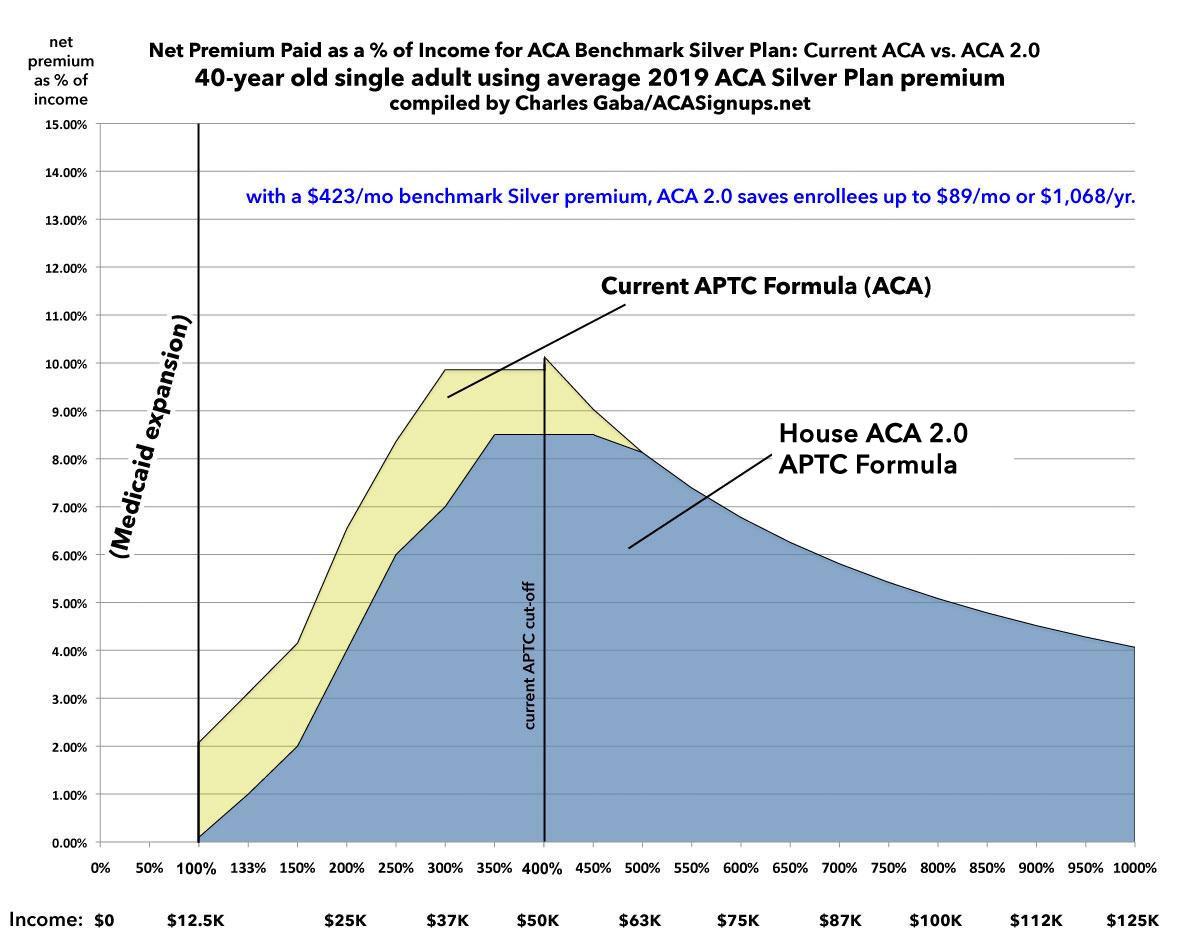 Now we come to the 50-year old: HERE'S where the improved ACA 2.0 subsidy formula really starts to kick in: 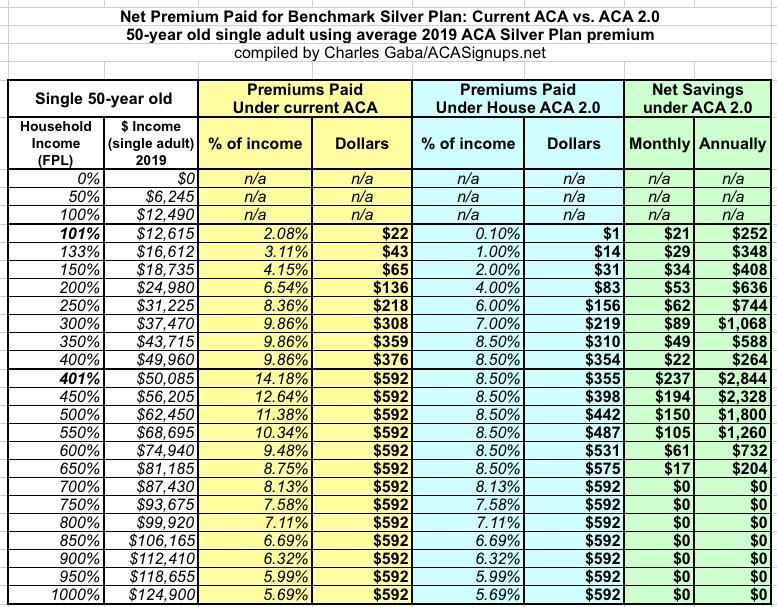 The ACA 2.0 upgrade continues to make a huge difference up until around 650% FPL (roughly $80,000/year), at which point it tapers off naturally. Here's what the graph looks like...and holy cats, what a difference it makes. This is exactly why it's called the "Subsidy Cliff": 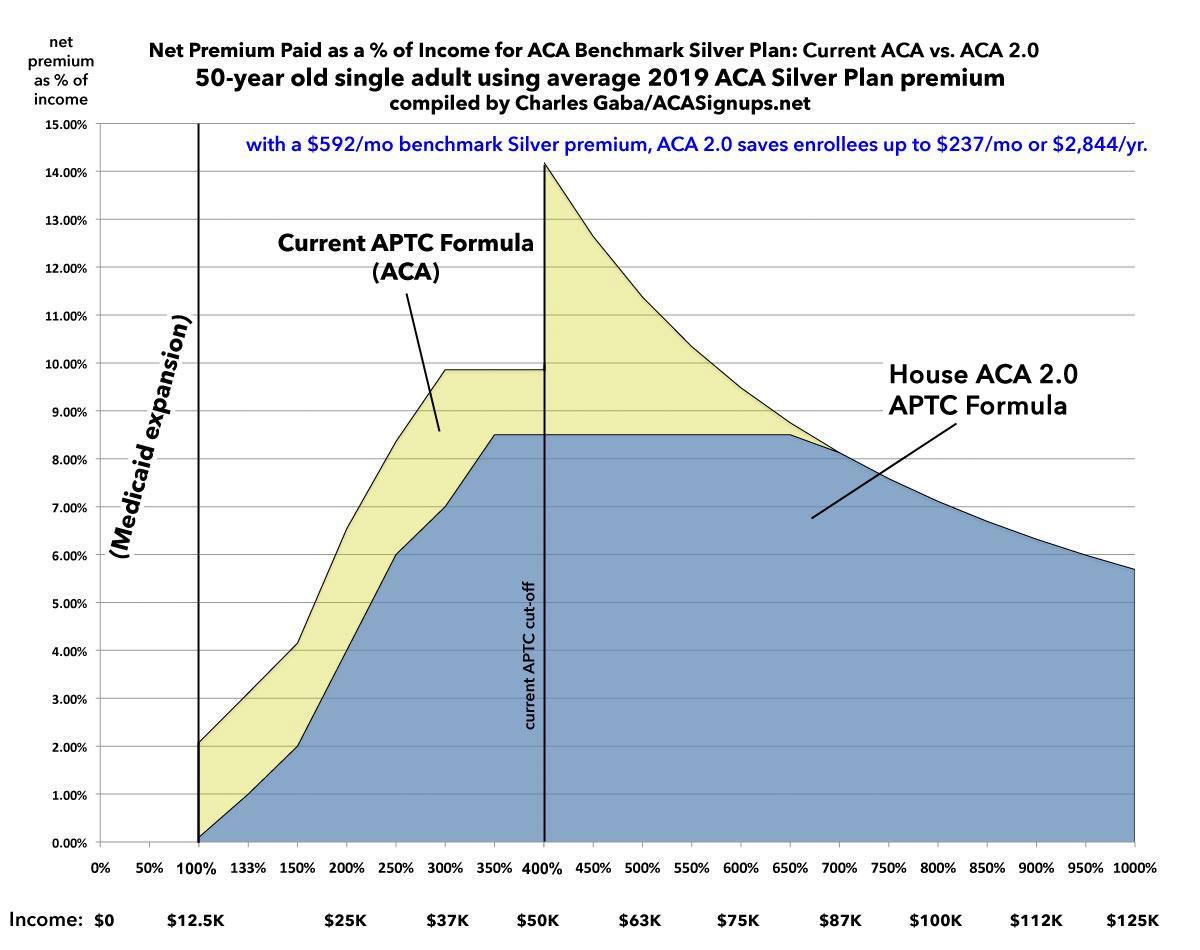 Finally, what about the upper end of the spectrum: A single 60-year old?

As I noted above, the current worst-case example is a 64-year old living in Wyoming, who would currently have to pay over $2,000/month for a policy which only covers 70% of their medical expenses (and it likely includes a deductible of $4,000 or more as well). For anyone earning less than $100,000/year, this is pretty much insane (and even at that income it'd eat up nearly 25% of their total income). 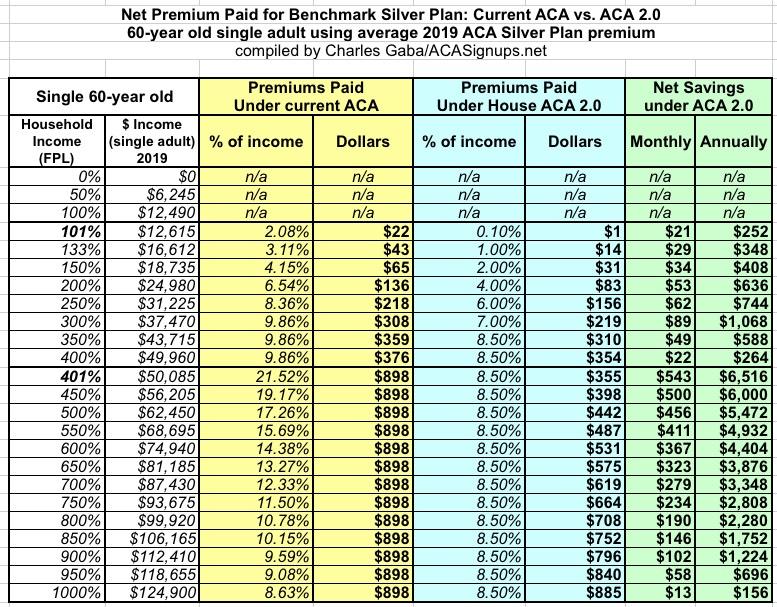 Again, if they earn between 100-400% FPL, their savings is "only" up to $1,000 or so compared to current ACA subsidies. But HOLY CRAP ON A STICK...check out what happens just over the 400% threshold. I'll jump straight to the graph, because the visual tells the story far better than words can: 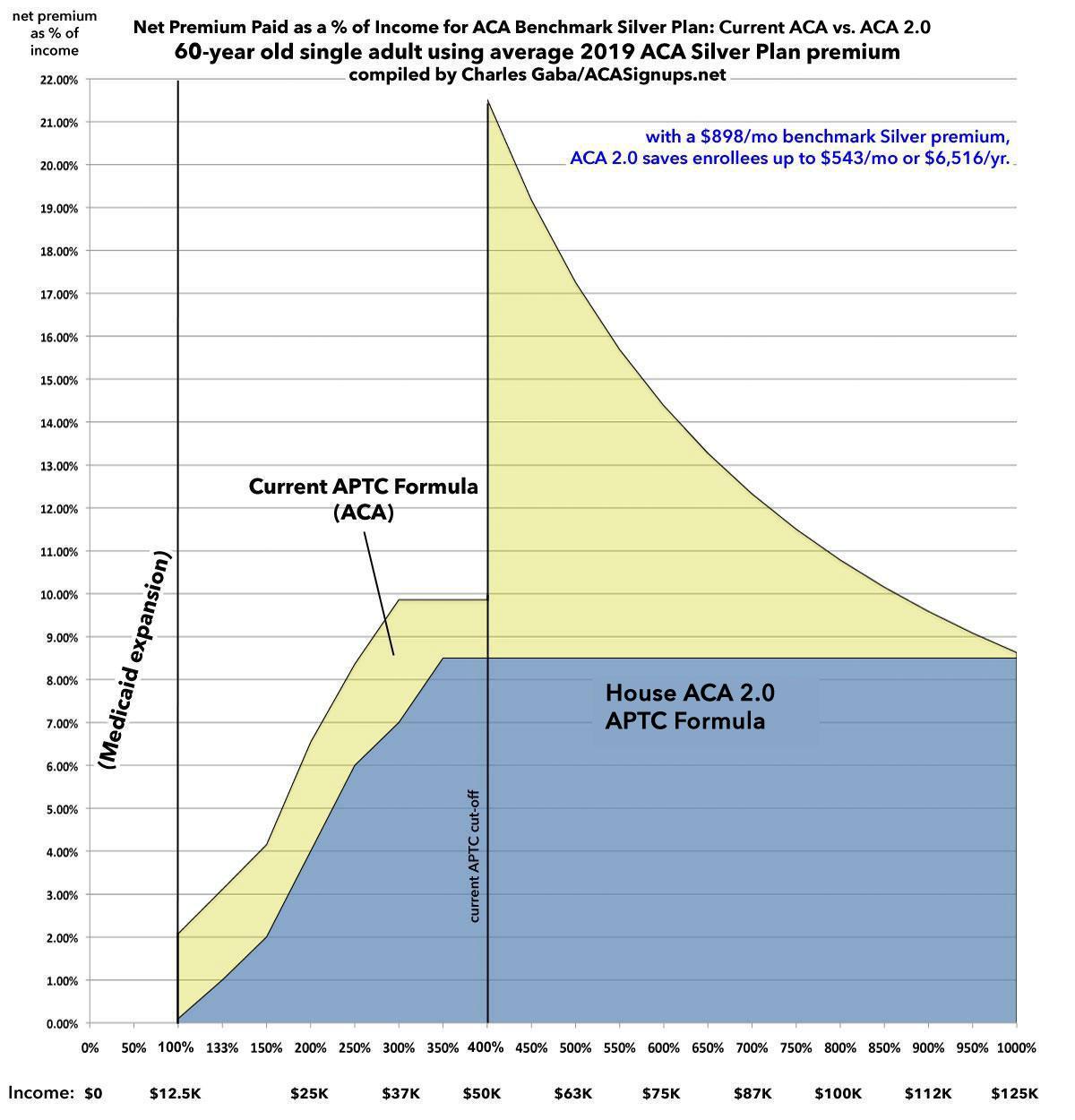 Yes, that's right: A 60-year old single adult earning $50,000/year would go from spending nearly $900/month to around $350...cutting their premiums down by over 60%. Note that the subsidies in this case wouldn't actually taper off until around 10x the Federal Poverty Level.

How much would all of this cost? Well, that's difficult to estimate since you'd have to know how many additional people enrolled because of the change, what the age demographics of those new enrollees were and what income brackets they fell into...as well as breaking all of those data points out by state (and even by rating area within each state). In addition, the numbers here are for individual enrollees; family plans aren't priced on a one-to-one ratio. You'd also have to add the increased subsidies being paid to currently subsidized enrollees.

However, I can do a little back of the envelope math:

Then, you'd have to add the additional subsidies for current enrollees. In 2018, there were around 8.9 million subsidized enrollees who received an average of $550/month in APTC subsidies. From the tables above, it looks to me like each of those enrollees (all of whom are in the 100-400% FPL range) would likely receive roughly $400 more APTC assistance on average per year, for a total of around $3.5 billion.

All told, we're talking about beefing up APTC subsidies (currently around $59 billion/year) by roughly $18.5 billion...while providing affordable healthcare coverage to 5 million more people and significantly more affordable coverage to another 9 million (well...more like 6.3 million...around 30% of current APTC enrollees are in the 200-400% FPL range and are greatly benefitting from Silver Loading, which would disappear as CSR funding was reinstated; for that population this would probably be a wash).

HOWEVER, you'd also have to account for the improvement to the risk pool. Having more healthy people enrolled in exchange coverage would reduce the per capita average costs, which would reduce unsubsidized premiums somewhat, thus lowering the amount of subsidies required. I figure this would knock perhaps 10% off the total APTC amount, bringing it down from $77.5 billion to perhaps $70 billion. That would mean a net increase of around $11 billion per year.

Update: One study by the Commonwealth Fund in 2017 attempted to project how much both enrollment and subsidies would go up if the 400% FPL cap was removed but without making the APTC formula itself any more generous (that is, the range would remain 2.08-9.86% of income; it's just that those earning over 400% FPL would be capped at 9.86% as well). In that study, they projected around 1.2 million uninsured people would gain coverage (and subsidies), and 400,000 currently unsubsidized enrollees would gain subsidies. However, that was before the 28% premium increase in 2018 caused mostly by Trump's CSR funding cut-off, so it's difficult to tell. In terms of cost, the Commonwealth study projected it would cost roughly $6 billion on top of existing subsidy spending.

As it happens, Donald Trump's CSR sabotage fiasco increased federal spending on APTC subsidies by $21 billion per year...which means that an even swap involving formally appropriating CSR funding in return for removing the 400% FPL cap and strengthening the APTC formula would likely save around $10 billion per year. And that's not even accounting for the potential $11 billion/year in savings which could be available depending on how the CSR lawsuits play out!

And where would that $10 billion go? Well, that's where H.R.1868's beefed-up CSR provision comes in...but you'll have to wait until another entry for that one...