SACRAMENTO, Calif. — An updated Covered California analysis highlights how the expiration of the American Rescue Plan (ARP) would raise costs for enrollees, including doubling premiums on average for 1 million low-income Californians, and may lead up to 220,000 people to drop their health coverage. The analysis comes as Congress deliberates whether to extend the law, which provides increased financial help and is set to expire at the end of this year.

“The American Rescue Plan’s financial help is a lifeline for millions of Americans, keeping health insurance more affordable and within reach,” said Jessica Altman, executive director of Covered California. “Millions of Americans are counting on Congress, as cutting the financial help that the law provides means many families will face the difficult choice of becoming uninsured and rolling the dice if they get injured or sick.”

Covered California’s analysis — “Americans Brace for Higher Health Insurance Costs if the American Rescue Plan Is Allowed to Expire” — shows how Californians could be affected if Congress elects not to act. The ARP lowered the monthly premium paid by Covered California consumers by 20 percent from 2021 to 2022, enrollment hit a record high of 1.8 million people, and 92 percent of consumers were eligible to receive financial help. Nationally, monthly premiums dropped by 23 percent and enrollment reached 14.5 million people.

“The American Rescue Plan lowered premiums and boosted enrollment among all income brackets and ethnic groups,” Altman said. “In the absence of federal action to extend these policies into 2023 and beyond, the gains we have made as a state and as a country will be at risk.”

Californians Face Higher Costs if the ARP Is Allowed to Expire

Covered California’s analysis found that if the federal subsidies provided by the ARP expired, enrollees who annually earn less than 400 percent of the federal poverty level ($52,000 for a single person and $106,000 for a family of four) would see their monthly costs rise by an average of $70 per month (71 percent).

The analysis also found that Californians who could least afford the increase — those earning between $17,775 and $32,200 a year for an individual and from $36,570 to $66,250 for a family of four — would be affected the most, with their health insurance costs more than doubling. A total of 1 million Covered California consumers are in this income bracket, which is 250 percent of the federal poverty level or below (see Figure 1: Potential Premium Increases for Covered California Subsidized Enrollees Earning Less Than 400 Percent of the Federal Poverty Level in 2023).

In addition to the analysis, Covered California is also providing data outlining the impact of the ARP’s expiration within California’s 53 congressional districts, which can be found here. The data is broken down by income brackets and shows how Californians across the state could be affected.

The expiration of the ARP subsidies would also mean the return of the so-called “subsidy cliff,” which means middle-income consumers — individuals who earn more than $51,520 per year and families of four who earn more than $106,000 per year — would not be eligible for any federal financial help. In California, these middle-income consumers would see their costs increase by an average of $272 per month (see Figure 2: Potential Premium Increases for Covered California Subsidized Enrollees Earning More Than 400 Percent of the Federal Poverty Level in 2023).

“The American Rescue Plan built on the Affordable Care Act and allowed more people than ever before to get the protection and peace of mind that quality health care coverage provides,” Altman said. “Whether you are one of Covered California’s record-high 1.8 million consumers, or you get your coverage directly from a health insurance company, you will be paying more next year if these subsidies are not extended.” 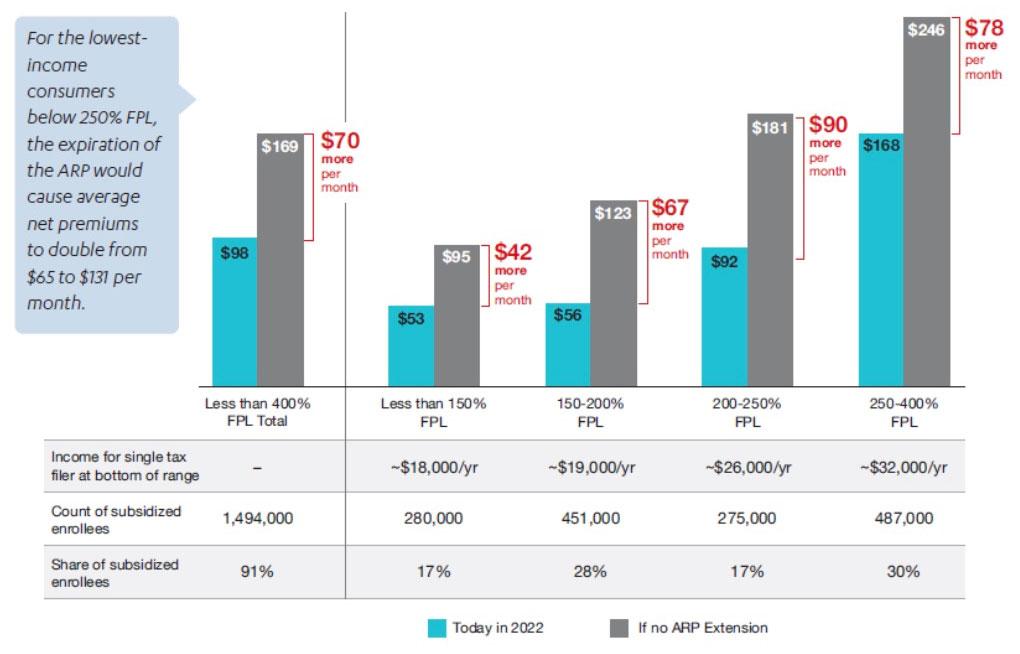 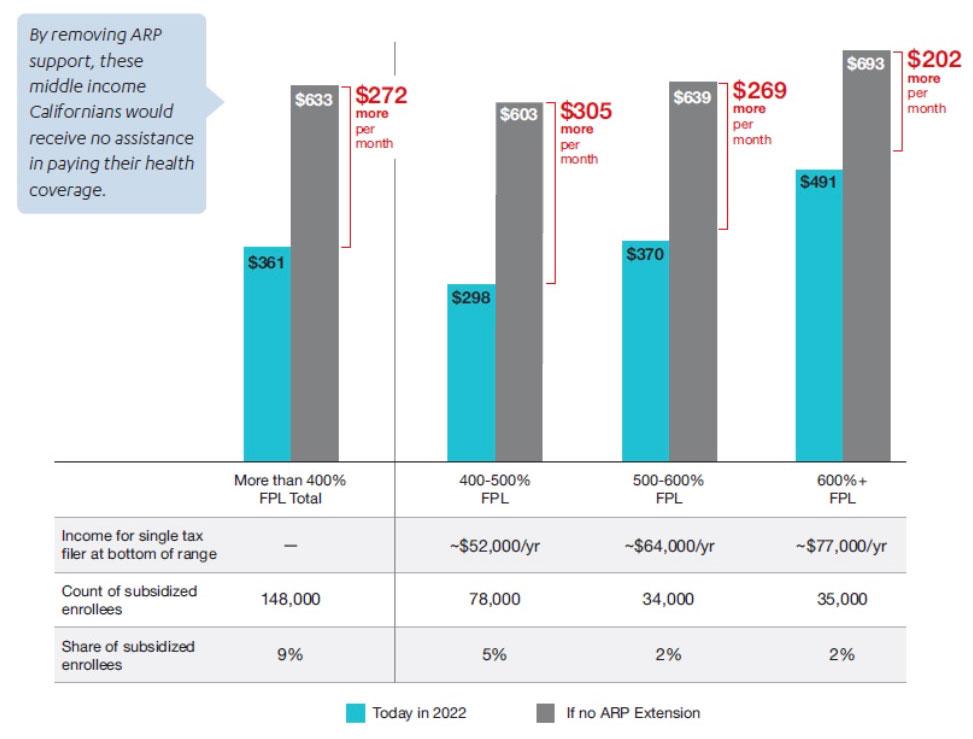 Hundreds of Thousands of Californians Could Lose Coverage

An estimated 3 million Americans would lose health insurance coverage if the American Rescue Plan’s benefits were allowed to expire, including 220,000 Californians.

Rolling back the increased subsidies would also have a disproportionate impact on California’s communities of color, whose enrollment increased significantly during the pandemic.

Many people may also try to remain insured by switching to less-comprehensive coverage, with higher deductibles and lower monthly premiums. In doing so, consumers could expose themselves to higher out-of-pocket costs that could delay or prevent them from accessing care.

The analysis gives real-world examples of the premium increases that look beyond the averages to the lived experiences of consumers who differ by their age, family size, income and where they live.

The Importance of Congress Acting as Soon as Possible

Covered California will announce its preliminary health plan rates for the 2023 coverage year on July 19. The rate changes are affected by the uncertainty surrounding the future of the ARP and the potential enrollment impact it could have if the federal subsidies are not extended.

To avoid disruption for the upcoming renewal period in October and the start of open enrollment in November, congressional action needs to take place immediately.

“Covered California stands ready to move mountains if Congress elects to extend the American Rescue Plan’s subsidies, but every single day matters,” Altman said. “The longer we go without a decision, the harder it will be to implement a new subsidy structure and avoid consumer confusion.”