UPDATE: Actually, make that over 37.2 million covered directly by the #ACA.

Last week the Centers for Medicare & Medicaid posted a new press release about a new report from the HHS's Assistant Secretary for Planning & Evaluation (ASPE) which has updated ACA-specific enrollment data current as of October 2021 - March 2022:

Today, the U.S. Department of Health and Human Services, through the Office of the Secretary for Planning and Evaluation (ASPE), released a report showing new estimates for coverage related to the Affordable Care Act (ACA), concluding that the total enrollment for Medicaid expansion, Marketplace coverage, and the Basic Health Program in participating states has reached an all-time high of more than 35 million people as of early 2022. The ASPE findings build on a report from the Centers for Medicare & Medicaid Services (CMS) showing a record-breaking 21 million people in more than 40 states and territories gained health care coverage thanks to the ACA’s expansion of Medicaid to low-income adults under 65. More than two million people gained coverage as a result of Medicaid expansion under the Biden-Harris Administration, ensuring health care coverage for underserved communities during the COVID-19 Public Health Emergency.

As I noted at the time, while the press release talks about "more than 35 million" being enrolled, when you look at the data in the actual data, it was actually over 35.8 million, and is likely well over 36 million today. Here's how they broke it out in the report:

There were two reasons I suspected the current total is over 36 million:

However, not only was the deadline for the 2022 OEP the end of January (vs. mid-December during 2021 OEP), but the American Rescue Plan, with its expanded financial subsidies, wasn't signed into law until March 2021 (and the extra subsidies weren't available until May or later). This meant that people who had decided their ACA plans were too expensive were more likely to drop their coverage in the first couple of months of 2021. In early 2022, those extra subsidies were already locked in for the year.

Before I get into that, there's one other important thing to note: The state-by-state Medicaid expansion enrollment breakout report which the Centers for Medicare & Medicaid used to arrive at the "21 million" figure in their press release doesn't include Idaho or Virginia for some reason.

Why? I have no idea, but adding those two states alone increases the total by over 775,000 enrollees. (Interestingly, the report does include Puerto Rico and the U.S. Virgin Islands. Huh.)

Here's the states where I've been able to update the numbers in the CMS report, which again, only runs through October 2021:

Add them all up and you get a grand total of 22.5 million Medicaid expansion enrollees, bringing the grand total of Americans directly enrolled via ACA programs up to at least 37.25 million people: 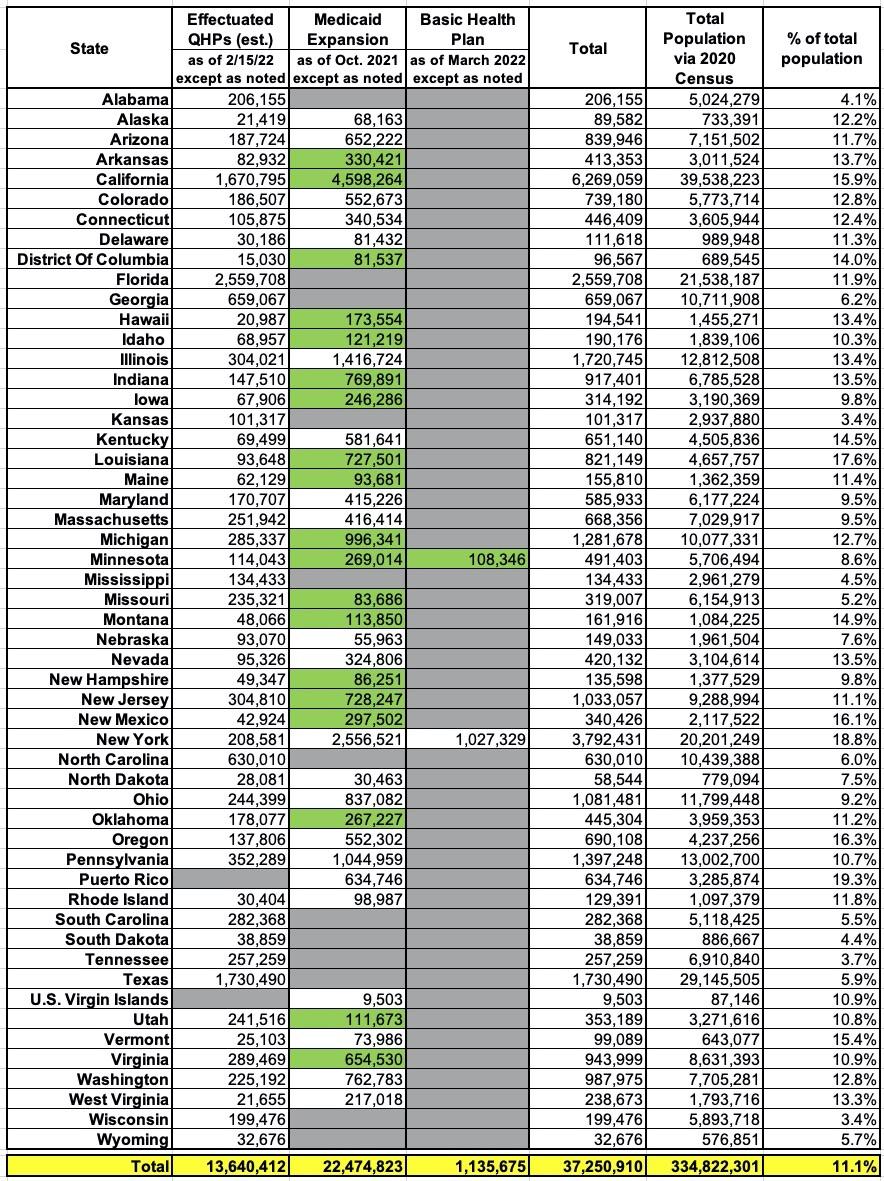