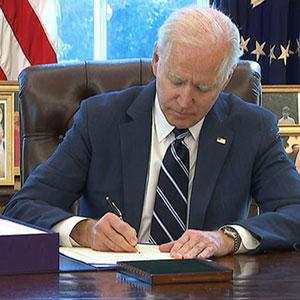 ‘(B) SPECIAL RULE FOR CERTAIN INDIVIDUALS LAWFULLY PRESENT IN THE UNITED STATES.—If—

In short, the ACA includes a workaround which says that recently-arrived, low-income immigrants are treated as though they earn the bare minimum necessary to qualify for the highest level of ACA subsidies...and with the passage of the the American Rescue Plan, that basically means he'll be eligible for a FREE benchmark Silver plan with a $0 deductible and extremely low co-pays/etc.

I closed out my post by noting an incredible irony regarding the Medicaid Gap:

...an immigrant whose been in the U.S. for less than 5 years is legally eligible for low-cost healthcare coverage while ~2.2 million U.S. citizens aren't because their Republican state officials...refuse to expand Medicaid.

As a reminder, ACA exchange subsidies are available to qualified enrollees who earn at least 100% of the Federal Poverty Level (in 2021, that's $12,760/year for a single adult; $26,200 for a family of four in most states). Under the original ACA, subsidies were cut off at 400% FPL; under the American Rescue Plan (ARP) that upper-end cut-off is eliminated...but the lower-bound 100% FPL threshold remains in place.

This means that in the 12 states with Republican-controlled legislatures which still haven't expanded the program, there's around 2.2 million adults who fall into the "Medicaid Gap", meaning they earn too little to qualify for ACA subsidies but they can't enroll in Medicaid either.

Now, the ARP does include an important provision intended to persuade those states to join the rest of the country in expanding Medicaid (basically, a hefty bribe), but it's still up to them to actually do so, and the odds aren't great in most of them because their opposition has nothing to do with "budgetary concerns".

HOWEVER...according to my friend & associate Andrew Sprung over at Xpostfactoid, it turns out the ARP may have slipped in a way for at least some of those 2.2 million "Medicaid Gap" folks to receive quality healthcare coverage for next to nothing after all!

When the House Ways & Means Committee released their portion of the ARP's legislative text, I kind of scratched my head at the wording of the section about how ACA enrollees receiving unemployment insurance were to be treated:

Here's the wording of that section:

(a) IN GENERAL.—Section 36B of the Internal Revenue Code of 1986 is amended by redesignating subsection (g) as subsection (h) and by inserting after subsection (f) the following new subsection:

‘‘(g) SPECIAL RULE FOR INDIVIDUALS WHO RECEIVE UNEMPLOYMENT COMPENSATION DURING 2021.—

‘‘(1) IN GENERAL.—For purposes of this section, in the case of a taxpayer who has received, or has been approved to receive, unemployment compensation for any week beginning during 2021, for the taxable year in which such week begins—

‘‘(A) such taxpayer shall be treated as an applicable taxpayer, and

‘‘(B) there shall not be taken into account any household income of the taxpayer in excess of 133 percent of the poverty line for a family of the size involved.

...I'm not an expert on legislative text but that sure looks to me like someone who receives even one week of unemployment this year gets treated as if they only earned 133% FPL regardless of how much they make. Huh.

At the time, I was confused because the part about "not taking into account any income in excess of 133%" makes it sound like someone who earns more than 133% FPL will still be counted as earning exactly 133% FPL as long as they're on unemployment for at least one week this year.

Let's say you were on unemployment from January 1st - 7th, but then got a job on January 8th and end up earing a decent living for all of 2021. The interpretation I just gave would mean that you'd still get a free ride with $0 premiums & full CSR assistance, which sounds...odd to say the least.

However, I sort of shrugged that off at the time and moved on to other issues.

Sprung originally came to the same conclusion as I did:

...but he then dug into a post by Louise Norris which basically says that the "treated as an applicable taxpayer" part means that they qualify for ACA subsidies after all:

The circuitousness of the provision has a certain elegance. A family income that includes unemployment income is deemed to be not more than 133% FPL. Oh, and said family income is also deemed, by referral, to be not less than 100% FPL.

Of course, as Cynthia Cox of the Kaiser Family Foundation noted, the odds are that the expanded unemployment insurance will likely push many folks over the 100% FPL threshold regardless (thus making this entire do-si-do unnecessary). For a lot of people that won't be the case, however...and in the 12 non-expansion states, this provision could be a literal life-saver.