Under the Affordable Care Act (ACA), Medicaid coverage is extended to nearly all nonelderly adults with incomes at or below 138% of the federal poverty level (FPL) ($29,435 for a family of three in 2019) in the 37 states (including DC) that opted to expand as of December 2018. Under rules in place before the ACA, all states extend public coverage to poor and low-income children, with a median income eligibility level of 255% of poverty in 2018. The ACA also established health insurance marketplaces where individuals can purchase insurance and allowed for federal tax credits for such coverage for people with incomes from 100% to 400% FPL ($21,330 to $85,320 for a family of three in 2019). The American Rescue Plan Act (ARPA) of 2021 temporarily expanded eligibility for tax credits to people with incomes above 400% FPL for 2021 and 2022. Tax credit eligibility shown here accounts for the expanded subsidy structure outlined in the ARPA. Tax credits are generally only available to people who are not eligible for other coverage.

The interactive tool lets you compare all 6 categories of the uninsured population by percent of total or by raw numbers, and also lets you look at each individual state.

Here's what it looks like nationally; again, this is based on the expanded subsidies available via the American Rescue Plan for 2021 & 2022 (and, hopefully, permanently): 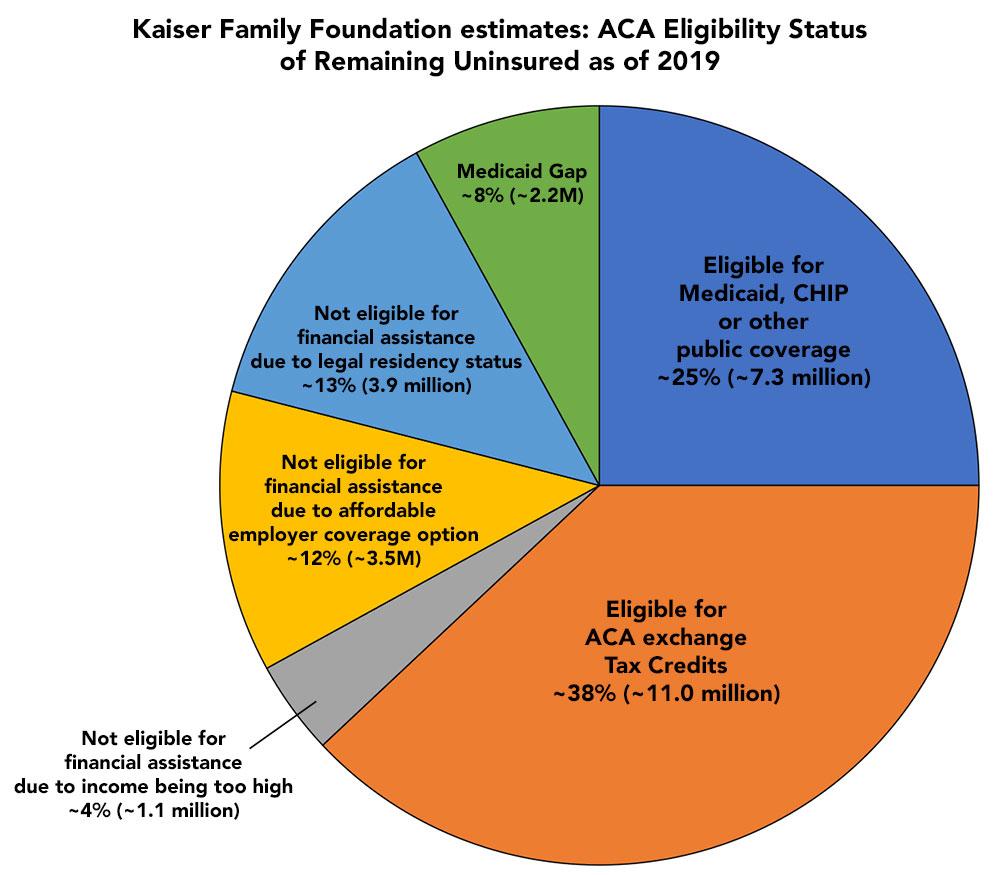 The stunning takeaway here is that a whopping 63% of uninsured Americans could enroll in at least fairly comprehensive healthcare coverage for FREE or for an affordable price (between 0 - 8.5% of household income, depending on how much they earn). That's around 18.3 million uninsured Americans.

Of those 18.3 million, around 40% of them are eligible for Medicaid or CHIP coverage, which is generally free (or involves nominal co-pays).

Even if you only consider Gold, Platinum or "Platinum-plated Silver" to be "good" coverage, that's still around 11 million who could sign up for FREE COMPREHENSIVE COVERAGE RIGHT NOW.

Another 7.3 million Americans are now eligible for significantly-enhanced & expanded ACA exchange subsidies which may not bring the premiums down to $0, but still dramatically lower them...to as little as $50 or less for most of that population, even at middle-class incomes.

Of course, even if every one of those 18.3 million Americans were to take action and #GetCovered, that'd still leave around 10.7 million uninsured, which is still a serious problem, especially those caught in the Medicaid Gap, undocumented immigrants, and those who can't get subsidies because they supposedly have an "affordable coverage" offer from their employer which isn't really "affordable" by any reasonable measure.

Having said that, if everyone were to take advantage of the Medicaid, CHIP and ACA exchange plans being offered right now, we could lop the U.S. uninsured rate down from around 9% down to 3.2% using the current structures in place!

(Note: Obviously the COVID pandemic bumped the uninsured numbers up by several million more people, but the vast majority of them are also eligible for Medicaid, CHIP or subsidized ACA plans.)