ASPE Report: 6.8M residents of HC.gov states (up to 10.9M nationally) eligible for FREE #ACA plans thanks in part to the #ARP

Roughly 29 million people currently living in the US lack health insurance. According to the new HHS estimates, about 6.8 million of them could now purchase an ACA plan with no monthly premium, and another 1.3 million could sign up for a health plan that costs less than $50 a month. Many of those people already qualified for free or low-cost coverage prior to the ARP, but based on the federal projections, the new law’s expansion of the ACA made an additional 2 million Americans eligible for free or cheap coverage.

A low premium is no guarantee that a plan’s out-of-pocket costs will also be low enough for people to find it affordable. But about 1.9 million people with incomes between 100 and 150 percent of the poverty level can get insurance with no monthly premium that will cover 94 percent of their medical costs, according to federal estimates. And about two-thirds of uninsured Black and Hispanic/Latinx Americans, who are less likely to have coverage than their white peers, qualify for zero-cost coverage.

While Scott's article as very good, it makes one critical omission: The data from the ASPE report only includes the 36 states hosted via HealthCare.Gov. It doesn't include the other 14 states, plus the District of Columbia, which operate their own state-based ACA exchanges...which hold over 37% of the U.S. population. 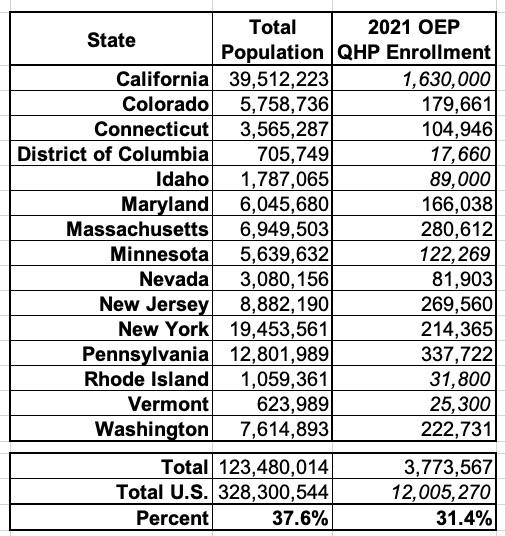 There's all sorts of demographic and socioeconomic variables in different states, of course, so the HC.gov data isn't necessarily representative across the other 15 states, but if it is, it would mean the actual number of Americans eligible for $0-premium ACA plans is somewhere between 9.9 million - 10.9 million, depending on whether you go by what portion of 2021 Open Enrollment Period enrollees each state holds or by what portion of the total U.S. population they hold.

Here's the actual report itself:

The Centers for Medicare & Medicaid Services (CMS) determined that the COVID-19 emergency presents exceptional circumstances for consumers in accessing health insurance and provided access to a Special Enrollment Period (SEP) for individuals and families to apply and enroll in the coverage they need. This SEP will be available to eligible consumers in the 36 states served by the federal Marketplace on the HealthCare.gov platform. Consumer access to the 2021 COVID-19 SEP on HealthCare.gov began on February 15, 2021 and will run through August 15, 2021. Most of the fifteen states (including the District of Columbia) that run a State-Based Marketplace (SBM) have also made available a COVID-19 SEP with a similar timeframe.

...States operating their own State-Based Marketplace (SBM) that do not use the HealthCare.gov platform are not included in the analysis: California, Colorado, Connecticut, District of Columbia, Idaho, Maryland, Massachusetts, Minnesota, Nevada, New Jersey, New York, Pennsylvania, Rhode Island, Vermont, and Washington.

Here's the ASPE report's breakout of the 11.1 million uninsured population within HC.gov states, along with what each national number assuming it extrapolates proportionately across all 50 states + DC:

An important note about the Silver Plan figures above: From what I can tell, while the ASPE report does note that those earning less than 150% FPL are eligible for CSR 94 assistance, it doesn't make it clear that a CSR 94 (or even CSR 87) plan is the equivalent of a PLATINUM plan.

In other words, a large chunk of those listed as being eligible for "$0-premium" or "<$50-premium" Silver plans are effectively eligible for free/low-cost Platinum plans, even if they're officially listed as Silver.

The ASPE report also breaks out the $0 premium & < $50 premium data by state, though again, this only includes the 36 states hosted by HealthCare.Gov; for this table, I haven't included estimats for the other 14 states + DC, as that gets too granular to assume a flat extrapolation: 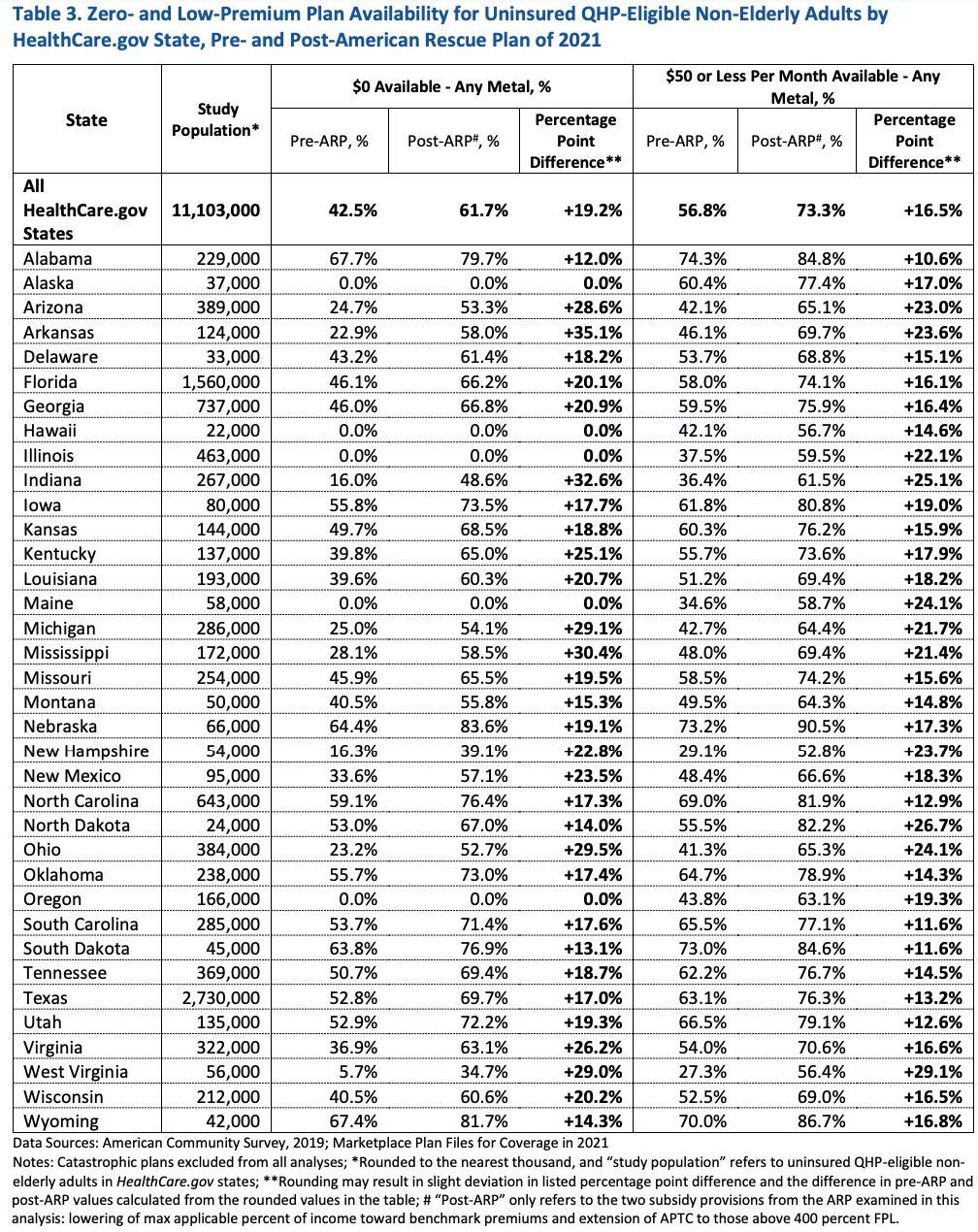