I wrote an extensive first-take analysis of the proposal, and concluded that their plan was pretty close to what I envisioned for the Next Big Thing® in healthcare policy to eventually replace the current ACA/Medicare/Medicaid/Employer Insurance healthcare coverage structure in the U.S.

Around half the population is currently covered by private insurance via their employer. The other half is covered via either Medicare, Medicaid or CHIP, are enrolled in private ACA Individual Market policies, are enrolled in a mish-mash of non-ACA compliant plans or have no coverage whatsoever. 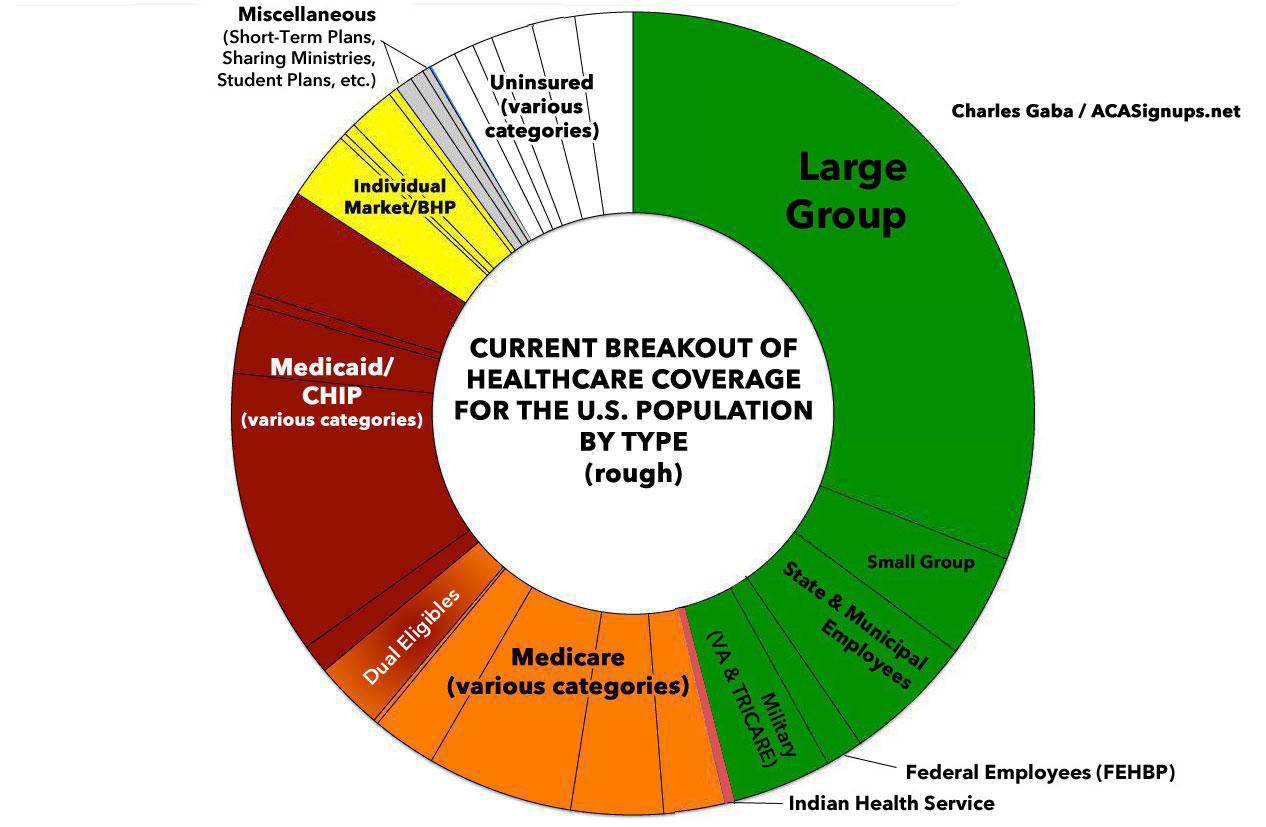 Under the "Medicare for All" bills being pushed by die-hard single payer healthcare advocates, the entire "psychedelic donut" above would be converted into a big Orange Donut...virtually everyone in the different colored sections (with the exception of the Indian Health Service and the Veterans Administration) would be mandatorily absorbed into a new, far more robust/comprehensive Medicare program which would cover everything Medicare does today plus everything covered by "MediGap" supplementary policies as well as some other stuff. Critically, this new, expanded Medicare program would also feature no point-of-service cost sharing whatsoever: No premiums, no deductibles, no coinsurance or co-pays for just about anything.

Needless to say, replacing all enrollee cost-sharing with 100% taxpayer-funded payments would increase federal spending a lot, even as it eliminated premiums and other cost sharing for employers, enrollees and state & local governments. There have been several projections from respected think tanks ranging from progressive to conservative, and while there's a wide range, they all seem to agree that federal spending specifically would have to increase by somewhere between perhaps $25 trillion to $35 trillion over the first decade. This shouldn't be particularly controversial...even Bernie Sanders himself admits that $30 - $40 trillion is a reasonable range.

Aside from the cost factor, one of the other major hurdles "Medicare for All" would have to overcome (and which has been the subject of a lot of debate among the Democratic Presidential contenders of late) is that it would mandatorily replace all private major medical health insurance for everyone. I made sure to clarify "major medical" because there's been so much confusion over "supplemental" insurance, which would still be allowed under the M4All bills but which would be reduced to a shadow of its' current scope.

As I've pointed out many times before, most of those in half of the Psychedelic Donut above would probably be happy (or at least, not too unhappy, as long as it's done right) about being pushed into the M4All plan. About 2/3 of them are already on Medicare, Medicaid or the CHIP program today anyway; most of the rest are uninsured altogether, so there'd only be an upside for them. The rest are either enrolled in ACA exchange plans or other oddball "short-term", "association", "student", "farm bureau" or "sharing ministry" plans...almost none of which are actually ACA-compliant.

The bigger problem, and the source of most of the "eliminate private coverage" controversy, is on the other half of the Donut: The ~160 million or so folks who are covered through their employer. Tens of millions of these people would probably be more than happy to ditch that coverage in favor of a M4All-style program...but tens of millions more are happy with what they have, or at the very least aren't so unhappy with it that they want to give it up in favor of a new, untested, massive government-run program. At the very least, they don't want to be forced into making the move.

CAP's "Medicare Extra" set out to solver (or at least mostly mitigate) both of these issues: The massive federal spending increase a "pure" universal single payer system like Med4All would impose as well as the massive public/political resistance and resentment which would inevitably occur from forcing over 300 million people to move to such a new program.

The basic concept isn't that complicated:

This solves nearly all of the "Can I Keep Private Coverage?" grumbling. Yes, you can...but most people probably wouldn't want to eventually, if it's done right.

As for the increased federal spending side, that would be substantially less than under Med4All for two reasons:

This, of course, means that a chunk of the total cost of the program would still be borne by the enrollees directly as opposed to the federal government, thus a smaller increase in federal spending.

Before today, however, how much of an increase in federal spending has remained an unknown. Unlike Med4All, which has had analyses done of it by the Urban Institute, the Mercatus Center, Emory University professor Kenneth Thorpe and others, there hasn't been a thorough, 10-year projection cost analysis of CAP's "Medicare Extra" done until now:

In February 2018, the Center for American Progress (CAP) released a proposal for universal health coverage known as “Medicare Extra.” Medicare Extra is an enhanced Medicare plan that would be open to all Americans while allowing employers to continue offering coverage. Although Medicare Extra differs in important respects from “Medicare for America”—legislation sponsored by Reps. DeLauro (D-CT) and Schakowsky (D-IL)—these proposals share the same approach.

CAP contracted with Avalere Health, an independent consulting firm, to model changes in coverage and costs under the Medicare Extra proposal. Avalere specializes in modeling of health policy proposals, using methods and assumptions similar to those of the Congressional Budget Office (CBO).

Even after the coverage expansion, the proposal would reduce national health expenditures by more than $300 billion each year by 2031 relative to current law. The proposal would reduce premium and out-of-pocket costs substantially across income groups for current Medicare beneficiaries; employees who switch to the Medicare plan; individuals currently enrolled in markets under the Affordable Care Act (ACA); and employees who choose to remain in employer coverage.

Avalere modeled three options of the proposal, as specified by CAP, varying only the Medicare Extra cost-sharing levels. Under one version, federal costs would increase by $2.8 trillion over 10 years. As we detail below, this cost is at a level that could be financed exclusively through higher taxes on wealthy individuals and corporations.

CAP explains that they also modeled the cost using cost-sharing models in which the enrollees would pay even smaller portions of their healthcare expenses, 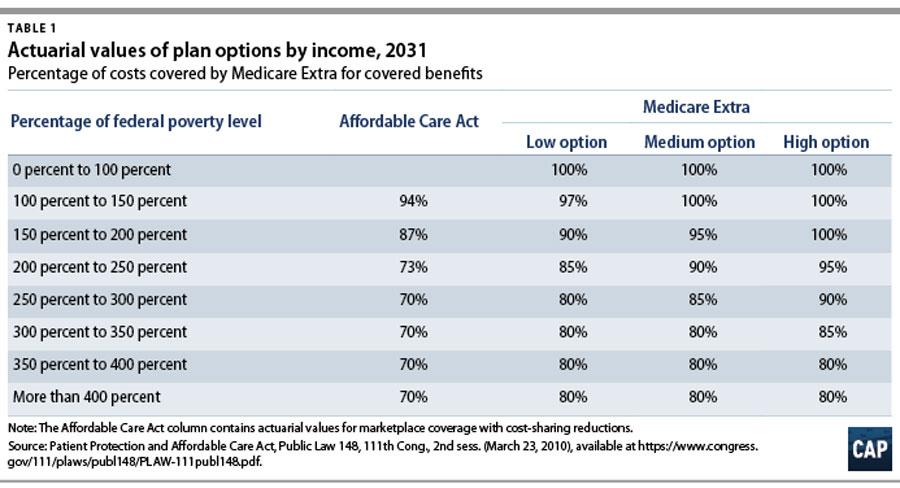 One of the biggest differences between CAP's "Medicare Extra" and DeLauro/Schakowsky's "Medicare for America" is how the subsidy/cost sharing formula would work. Med4America's table is more generous than MedExtra, with no deductibles for anyone, no premiums or cost sharing for those earning up to 200% FPL (as opposed to MedExtra's "Low Option" of 150%) and with expenses being capped at 8% of income at 600% FPL and higher (as opposed to MedExtra's 9% at 400% FPL or higher).

I've been informed (unofficially) that MedExtra's "High Option" variant above should be fairly close to the Med4America federal costs, which Avalere found would be around $4.5 trillion over that same decade.

Here's how Avalere sees the transition playing out by around the 9th year: 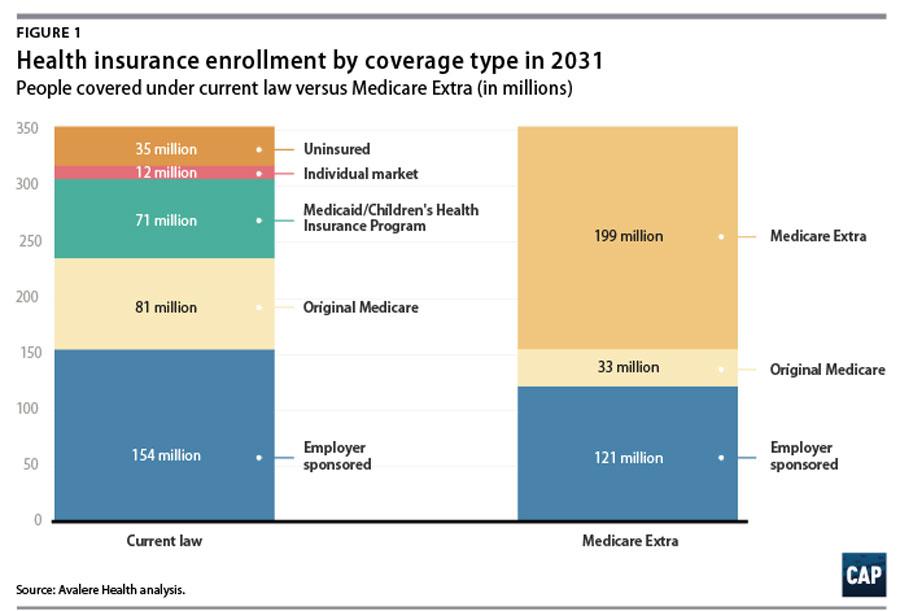 This is very similar to my own "Year 7+" projection of what the Psychedelic Donut would look like under either Medicare Extra or Medicare for America when you account for one major distinction between the two: CAP's plan would allow those enrolled in the current Medicare program to stick with it if they really wanted to or to switch over to MedExtra...whereas under Med4America, the existing Medicare population would be automatically shifted over but would get to keep paying their existing Medicare premium rates...which amounts to around 55 million older Americans receiving a hell of a bargain. 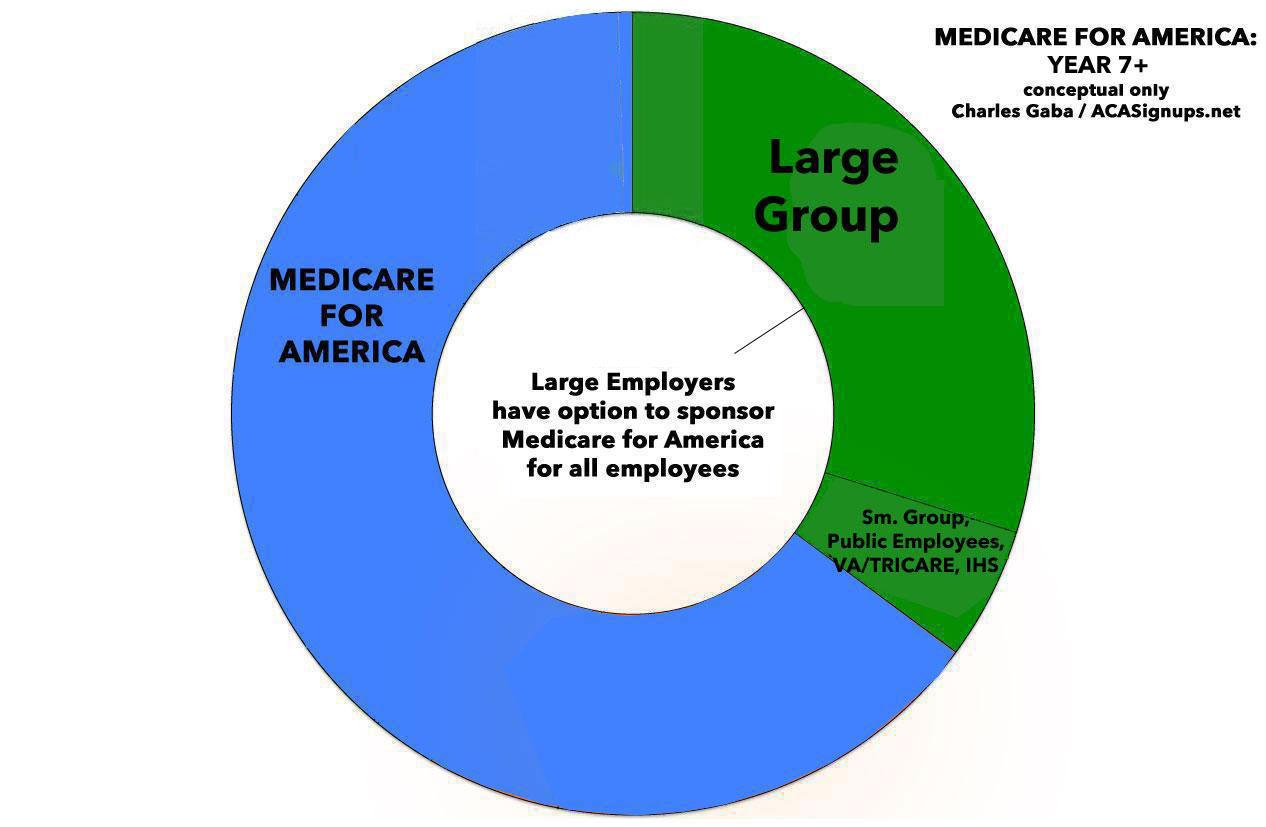 CAP's explaination goes on to say:

It's important to take 10+ years of inflation into account when reading this. According to the National Health Expenditure report by CMS, total healthcare spending nationally under current law is expected to increase to around $7.65 trillion in 2031, so cutting that down by $300 billion equals roughly a 4% overall savings...which is pretty close to what the (right-wing/anti-single payer) Mercatus Center projected Bernie Sanders' Medicare for All bill to save at current Medicare reimbursement rates anyway. One important difference:

As for how to fund the additional $2.8 - $4.5 trillion, CAP provides the following suggestions, at least for the "Low Option":

At a federal cost of $2.8 trillion, the proposal could be financed exclusively through higher taxes on wealthy individuals and corporations. Premiums (or equivalent tax financing) for middle-income families would not need to exceed a single-digit percentage of income. For example, the cost could be financed with any combination of the following tax revenue options:

For comparison, here's the official list of revenue sources to be found in the Medicare for America legislative text itself:

Medicare for America will be financed by sunsetting the Republican tax bill, imposing a 5% surtax on adjusted gross income (including on capital gains) above $500,000, and increasing the Medicare payroll tax and the net investment income tax. Medicare for America also increases the excise taxes on all tobacco products, beer, wine, liquor, and sugar-sweetened drinks.

Designing a universal health care proposal involves many tradeoffs. This proposal is an approach with policy dials that can be adjusted to achieve the desired outcomes or a pathway to an end state. In the coming years, Congress must find the balance that can be enacted into law as soon as possible.

This analysis illustrates that meeting the urgent need of universal coverage is clearly within our reach. The wealthiest nation on earth must finally join other developed nations to guarantee health care as a right, not a privilege.

And there you have it: Universal, comprehensive, portable and (truly) affordable healthcare coverage for the entire population for anywhere from 10 - 15% as much in additional federal spending as going the 100% pure, 100% mandatory, 100% single-payer-or-bust route of the "Medicare for All" bills.

I just wish a similar 10-year projection would be done for Medicare for America as well...again, I'm assuming it would likely come in somewhere around $4.5 - $5.0 trillion over a decade, but that's just my extrapolation of the MedExtra report. Stay tuned...

UPDATE: Whoops! I missed this bit, however:

Avalere estimated that setting hospital payment rates at 110 percent of Medicare rates would result in average hospital margins of 2 percent. Avalere used CAP’s assumption that Medicare Extra’s negotiation for prescription drugs would reduce drug prices by 30 percent. Avalere did not estimate the cost of changes to coverage for long-term services and supports.

Both Medicare Extra and Medicare for America include fairly comprehensive long-term services & supports (LTSS) for all enrolled in the program. Following this, the 2019 versions of both the House and Senate "Medicare for All" bills also added LTSS coverage.

On the one hand, this is not a minor omission from the Avalere cost analysis...in 2016, for instance, Americans spent $163 billion on LTSS care nationally, so adding this would bump up the 10-year cost of MedExtra or Med4America. On the other hand, I don't believe the "$30 - $40 trillion" estimates for Medicare for All include the cost of LTSS either, so at least it's still an apples-to-apples comparison.