Every Open Enrollment Period (OEP) for for the past several years, the Centers for Medicare & Medicaid (CMS) have issued a Weekly Snapshot Enrollment Report including the top-line Qualified Health Plan (QHP) enrollment data via HealthCare.Gov for that week along with the cumulative totals. They normally post these reports, which run Sunday - Saturday, on the following Wendesday...but yesterday came and went without one being released this year.

Given the insanity surrounding last week's Presidential election (along with the results) and the ongoing COVID19 pandemic, I was beginning to wonder whether they'd bother issuing those reports at all. Fortunately, they followed through late this afternoon:

In week one of the 2021 Open Enrollment period, 818,365 people selected plans using the HealthCare.gov platform. As in past years, enrollment weeks are measured Sunday through Saturday.

As a reminder, New Jersey and Pennsylvania transitioned to their own SBE platforms for 2021, thus they are not on the HealthCare.gov platform for 2021 coverage. Those two states accounted for 578,251 plan selections last year, accounting for 7% percent of all plan selections.  These enrollees’ selections will not appear in our figures until we announce the State-based Marketplace plan selections. 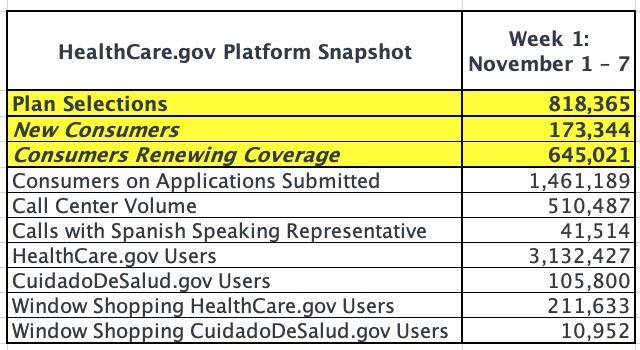 It's a bit tricky to compare the first weekly report against the previous year because the snapshot reports run Sunday - Saturday. Last year Nov. 1st fell on a Friday, so "Week 1" was actually only 2 days; "Week 2" included the following 7 days, for 9 days total.

Given the pandemic and the million of people who have lost their employer-based healthcare coverage this year, that makes sense...and is a relief, since there was also a concern that people would be scared off of enrolling due to the pending Supreme Court decision about the fate of the ACA itself. There was also the election this year, of course, which likely meant that enrollment the first 3 days of November was likely delayed until the 4th or 5th, making the first weekly numbers even more impressive.

It's also important to note the breakout between current enrollees actively renewing their policies and new consumers enrolling. Last year, in the first 9 days, it was a 74% / 26% split between the two. This year, for the first 7 days it's split 79/21. It's too early to say whether that means much, of course; the ratios could easily shift as we go forward.