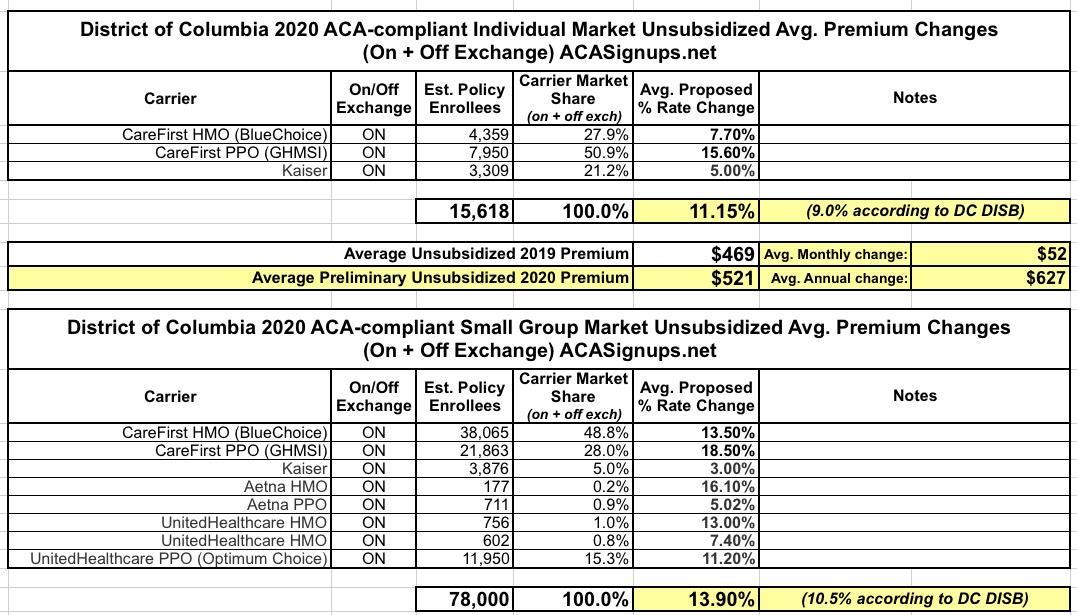 While the press release put the weighted average increase on the indy market at 9.0%, when I plugged the actual numbers into the spreadsheet, it came in at 11.2%, but...(shrug).

Well, these are just the requested changes, and there's always some back & forth between the carriers and the regulators, often including revised filings, before the final premium changes are locked in for the following year.

The other evening, there was apparently a public hearing regarding the proposed filings, and the takeaway was...confusing (as well as concerning, especially for those who don't qualify for financial assistance): 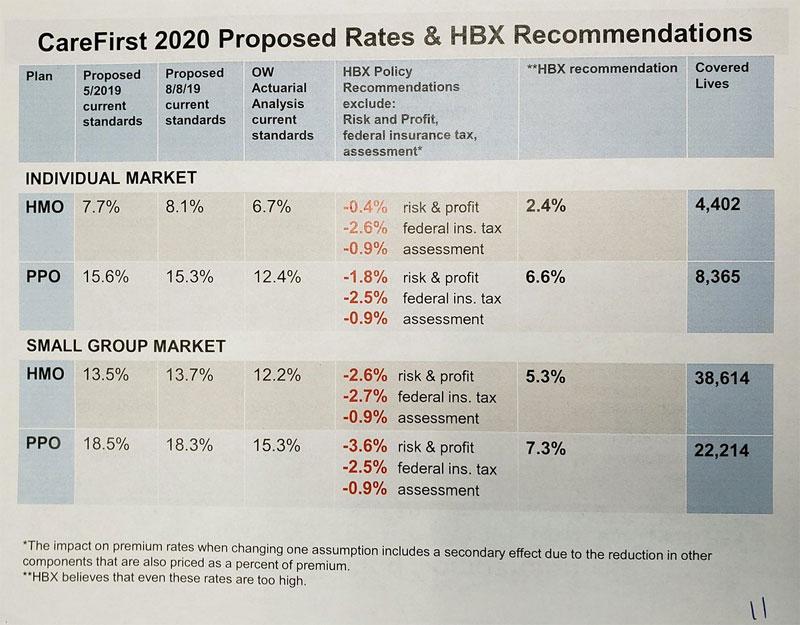 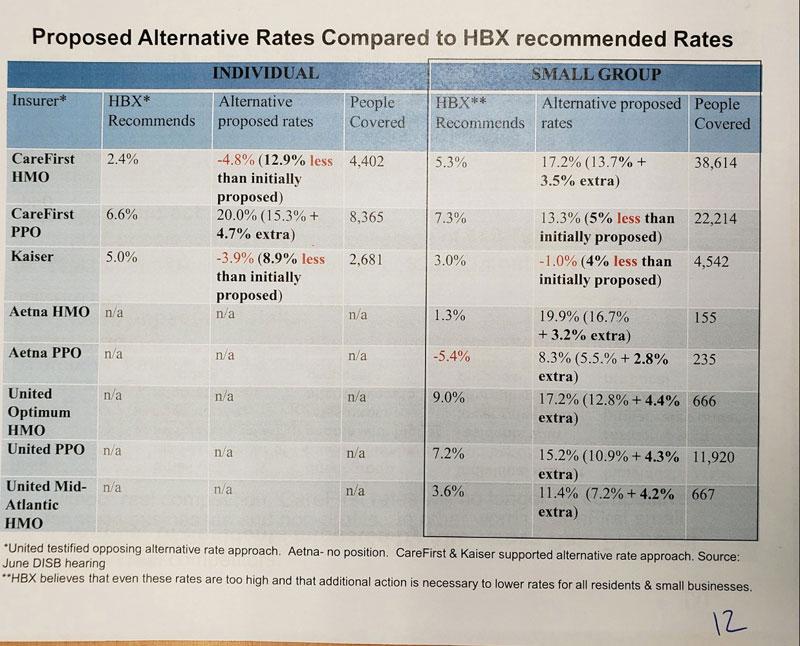 I'm not sure what to make of some of this...it looks like the August 8th percentages are the revised requested changes from the carriers. The HBX recommendation is obvious, although I'm not sure why they need to "recommend" those numbers if they're the ones who vote on the final rate approval (perhaps there's one part of the DC exchange board which makes the recommendations and another part which votes on them?)

It's possible that the fact that DC has a merged individual & small group risk pool has something to do with the wide range...perhaps they're planning on raising small group rates substantially in order to reduce individual rates, or vice versa? Even so, I'm truly not sure what to do with this.

There's also one other noteworthy item: DC, like New Jersey (and Massachusetts) has reinstituted the ACA individual mandate penalty for 2019 and beyond...but then apparently proceeded to not lift a finger to let anyone in the District know that they had done so:

For nearly six months—including the first month of open enrollment—the District failed to inform visitors to its online insurance exchange about the new coverage requirement. When District officials finally discovered their webpage fail, what did they do to admit their fault, and tell the public? Nothing.

...By stating that the requirement remained in effect for 2017 and 2018, the webpage implied that the mandate will disappear in 2019. But while the federal penalty disappeared on January 1, the District’s own insurance mandate replaced the federal requirement on that date. However, the webpage I saw did not mention the D.C. mandate at all.

It looks like no one updated the page prior to open enrollment to reflect the District’s new coverage requirement.

...In fairness, I, and presumably other prior customers, did receive a mailer from D.C. Health Link discussing the District’s new coverage requirement for 2019. However, the mailer did not mention the mandate until the top of its second page—an area where casual readers could easily miss it.

I don't normally link to The Federalist, but in this case Christopher Jacobs has a valid point. I know it's valid because I wrote an entire blog post complaining about this very point myself last fall (although I was mostly focusing on New Jersey at the time):

I followed up on this issue re. DC specifically in February:

...the same principle applies to the District of Columbia as well. DC's local mandate penalty wasn't made official until much later than New Jersey's (it wasn't officially signed by the DC mayor until September), and I had trouble finding any references to it even when I visited the DC Health Link website (there's no notice on the home page; you have to click the FAQ, then "Consumers", and then scroll halfway down the list to find the actual mandate penalty link).

Washington, DC - This week, the DC Health Benefit Exchange Authority (DCHBX) Executive Board adopted a unanimous recommendation from its Standing Advisory Board to allow a Special Enrollment Period (SEP) for District residents who may be subject to a District tax penalty because they did not have health insurance in 2019. A new District of Columbia law went into effect January 1, 2019 requiring residents to have health insurance, get an exemption or pay a penalty on their DC taxes. Some DC residents are learning about this individual responsibility requirement for the first time as they file their 2018 tax returns.

I mention this today because, while I haven't seen any of the other slides in the presentation at last night's public comment meeting, one thing I don't see any mention of in the slides above is the DC individual mandate penalty.

In any event, the situation in DC isn't looking good for some residents:

And I am one of the "lucky" ones - I am fairly healthy. (knock on wood). So many last night have had cancer or have other health issues that require medication (that w/o insurance would cost thousannnnnnnds). The #ACA is cracking :(

I don't know if Wendy is single, or how old she is, but I'm going to assume she is, and that she earns more than 400% FPL and is therefore not eligible for ACA subsidies. If her income is $50,000/year, she'd be just barely over the subsidy-eligibility threshold, which means she has to pay full price. That would explain the $7,500/year in subsidies, which would make up a full 15% of her gross income (20% if you include the HSA contribution).

Anyway, here's what the other various rate change scenarios look like in DC: 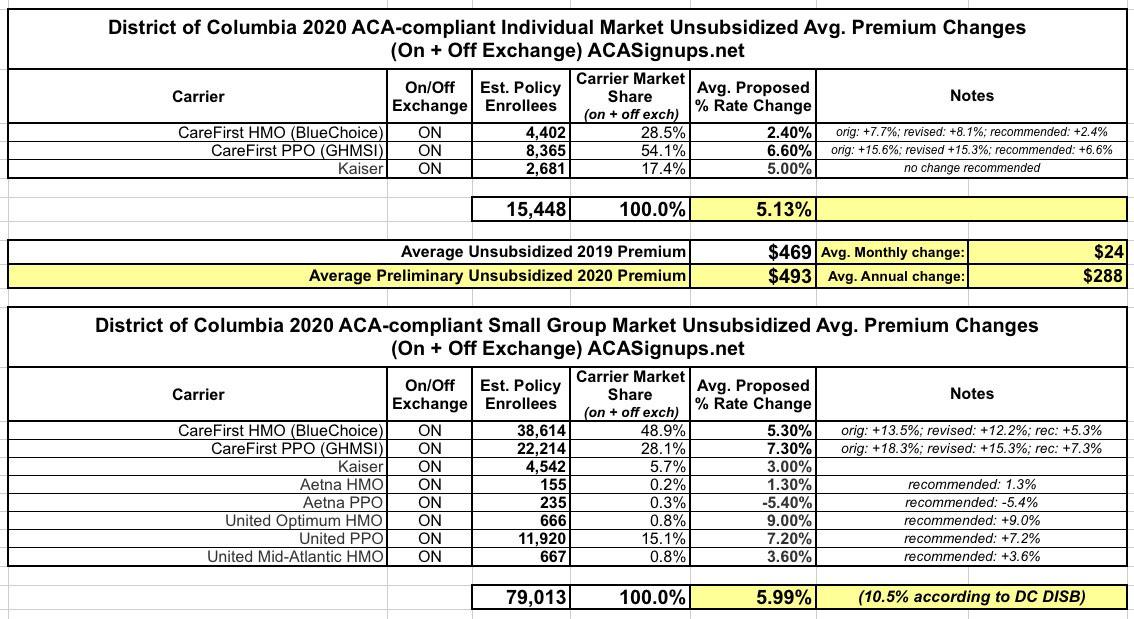 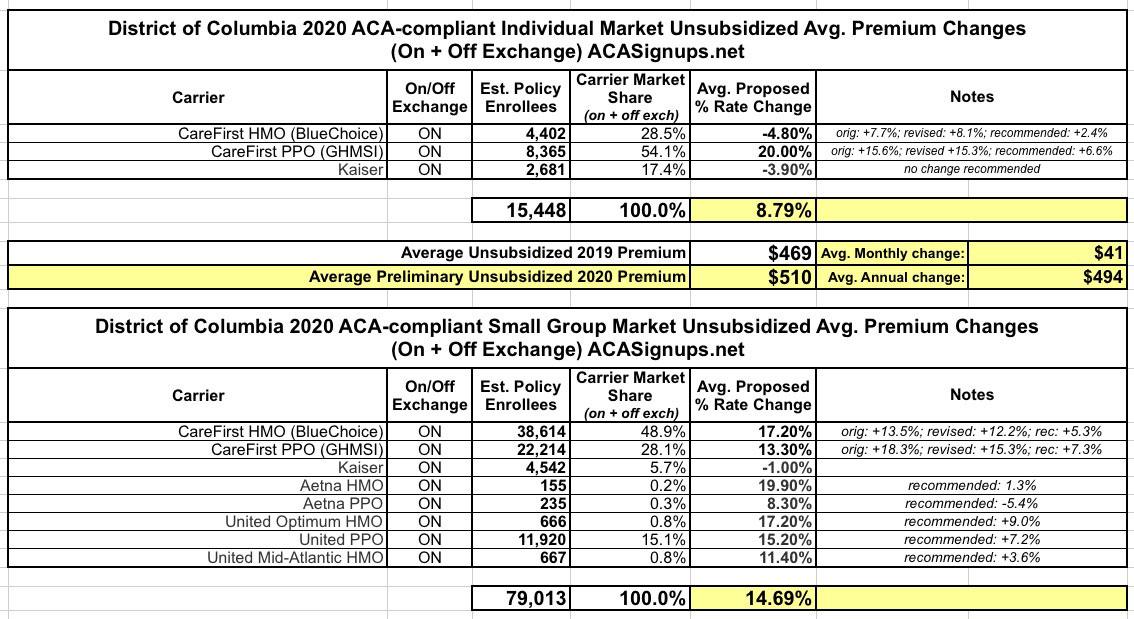