DEAR NJ, DC & MA: The #ACA Mandate Penalty won't work if NO ONE KNOWS IT'S STILL AROUND. 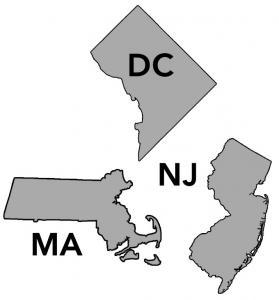 "But the whole point of the doomsday machine is lost if you keep it a secret! Why didn't you tell the world, eh?

No one applauded the New Jersey legislature and Governor Phil Murphy louder than I did when they swiftly passed several laws this past spring which cancelled out much of the Trump Administration's sabotage of the Affordable Care Act. As a reminder, the laws and waivers they put into effect included:

In addition, New Jersey had already effectively outlawed "Short-Term Plans" before the ACA was passed (they also passed a law protecting people from out-of-network "balance billing"; that's a major problem nationally which doesn't really have anything to do with the Trump Administration).

The good news is that the one-two punch combination of the reinsurance waiver and reinstating the mandate penalty has already proven extremely successful in terms of cutting unsubsidized premiums on the individual market down to size:

There won't be any impact of NJ banning short-term plans since they were already banned to begin with, and the crackdown on association plans is expected to be fairly nominal. However, the reinsurance program and mandate penalty reinstatement are saving unsubsidized 2019 individual market enrollees a whopping $1,500 apiece on average compared to what they'd otherwise have to pay.

If this sounds similiar to something I wrote last week, that's because it's the exact opposite of my write-up about the latest Kaiser Family Foundation survey. Kaiser found that nationally, only 31% of the U.S. population knows that the mandate has been repealed. 38% think that it's still around, while another 31% don't know.

But that's nationally; there's no way of knowing how that breaks out at the state level. The results likely vary widely from state to state. Furthermore, those numbers apply to the entire adult population. That's not terribly useful, because the ACA individual market risk pool isn't impacted by people enrolled in Medicare, Medicaid or covered through their employer, except to the extent that people shift onto or off of those programs to the ACA market.

In fact, it's likely even more confusing in New Jersey, since the federal mandate was repealed, only to be immediately replaced with an identical state mandate. I'd be willing to bet the "I don't know!" response is much higher than 31% in the Garden State.

The point is this: It was politically very brave of New Jersey Democrats to go ahead and reinstate the ACA individual mandate; it was the right thing to do for several reasons (especially the 5.8% premium drop), but the mandate has also always been extremely unpopular, even among people who support the law otherwise. All of that bravery will be for nothing if the state doesn't do everything in its power to make sure NJ residents know about the mandate penalty.

I bring this up because of this article by Phillip Klein in the Washington Examiner which points out that ACA enrollment is down significantly from last year so far:

Despite all these efforts, through Nov. 24, just 66,473 Garden Staters had signed up for Obamacare coverage, down 16 percent from the 79,000 reported at about the same time a year ago.

As an aside, this isn't quite true: Last year had one more day included in the Week 4 report; when you adjust for that, New Jersey is "only" down 14.4%. That's still pretty high, though.

Now, it's possible that in the closing weeks enrollment will spike. It's also possible that there was a shift this year, and more people started signing up outside the Obamacare exchange (as these numbers are only for plans purchased on the government-run exchange).

But at first blush, the New Jersey numbers present a challenge to those looking for an easy explanation for the drop off in enrollment that has been observed nationally.

My point about the importance of making sure people know about the mandate also apply to Massachusetts and the District of Columbia, although Massachusetts never actually repealed their pre-ACA mandate penalty, so they're simply dusting it off for 2019 and beyond. In addition, Massachusetts already had the penalty in place for 7 years before the ACA anyway, and they have the lowest uninsured rate in the country (partly as a result of the mandate), so it probably isn't as much of an issue there...as evidenced by the fact that ACA enrollment in Massachusetts is 4% higher than it was last year so far.

The District of Columbia, however, is in a simlar situation to New Jersey in that they also replaced the federal mandate with an identical local version which didn't already exist pre-ACA. Unfortunately, I have no idea how well or poorly DC is doing this year; they haven't posted any enrollment data at all so far.

So say it once, say it twice, third time's the charm: If you live in New Jersey, Massachusetts or the District of Columbia, unless you qualify for an exemption, you'll still have to pay a financial penalty of hundreds of dollars if you don't enroll in ACA-compliant healthcare coverage in 2019.