The actual data I need to compile my estimates are actually fairly simple, however. I really only need three pieces of information for each carrier: 1) How many effectuated enrollees they have enrolled in ACA-compliant individual market policies; 2) What their average projected premium rate increase (or decrease) is for those enrollees (assuming 100% of them renew their existing policies, of course); and 3) Ideally, a breakout of the reasons behind those rate changes, since there's usually more than one.

In mid-October 2015, I projected that the overall average rate increases for 2016 would be roughly 12-13% nationally...which was confirmed by mid-December, when the Robert Wood Johnson Foundation released a report which, when you weighted the averages by metal level market share, came in at around 11.6% across the entire ACA exchange market. The off-exchange market wasn't included by RWJF, but unless it was significantly higher or lower, that 11.6% should be pretty darned close.

Finally, last fall, I concluded that average rate hikes for 2018 would likely be higher still: Around 29% nationally...and I further concluded that around 60% of this (~17% or so) was due specifically to several deliberate actions designed to sabotage the ACA markets. The first part of this (~29%) was confirmed first by the Urban Institute and then, officially, by the Centers for Medicare & Medicaid themselves: Not only was I within 1 percentage point of the actual average nationally, on a state-level basis I was within 5 percentage points in 24 states and within 10 points in a dozen more.

This gave me the confidence I needed to conclude that I was pretty damned close on the second part of my estimate as well: That roughly 60% of the total (averaging around $80/month per enrollee, or $960/year nationally) was due specifically to Trump/GOP sabotage efforts last year. Trump's cut-off of Cost Sharing Reduction (CSR) reimbursement payments was the main culprit, followed by carrier concerns about the individual mandate not being enforced and/or being repealed, as well as general concerns about slashed marketing/outreach funding and general confusion caused by the repeated ACA repeal efforts on the part of Republicans in Congress.

In other words, I have a pretty good track record of accurately projecting average premium increases for the upcoming year for three years in a row.

That brings me to the 2019 season. Every year, Virginia is the first state to release preliminary rate change filings for the upcoming season, and this year is no exception. As Louise Norris of healthinsurance.org reports:

Looking ahead to 2019: All insurers remaining in the exchange, plus one new insurer joining in Richmond area

The Virginia Bureau of Insurance confirmed that all seven of the current exchange insurers plan to continue to offer coverage in 2019 (details are available in SERFF).

In addition, another insurer, Virginia Premier, plans to join the exchange in the Richmond area (rating area 7). Virginia Premiers filing indicates that they expect about 4,000 people to purchase their plans for 2019 (almost entirely via the exchange)...

As it happens, Kaiser and HealthKeepers have released their initial 2019 rate filings since Louise posted this the other day. There's some question as to whether CareFirst has 4,584 or 8,400 enrollees, and the 53,210 figure for Kaiser is based on 2017 data, not 2018, but assuming no other significant errors/omissions, it looks like the preliminary average unsubsidized rate increases being requested by the carriers in Virginia for 2019 average around 15.1%:

As for what portion of the requested rate hikes are due specifically to sabotage actions (mainly the elimination of the individual mandate and expansion of short-term/association plans), that's a bit less clear so far. The carriers do call out these factors (see screen shots below), but most aren't pinning a hard number. The CBO is projecting a ballpark 10% hike due specifically to the mandate repeal, and at least one VA carrier says this is about right:

Virginia is first out of the box with proposed 2019 ACA premium increases. As expected, increases are substantial, factoring in repeal of the individual mandate penalty and expected expansion of short-term insurance plans that will siphon off healthier people. One example: pic.twitter.com/DraY7xgQe4

Going forward, in the absence of any other documentation, I'm going to use the average sabotage impact projected by the Urban Institute (16.4% nationally) for each state as a placeholder, although I'll make sure to swap out the actual projected impact of mandate repeal/#ShortAssPlans for specific carriers and/or states in cases where either the carrier or the state insurance dept. provides such a breakout.

In the case of Virginia, the Urban Institute projects that the combined effect of mandate repeal + #ShortAssPlans will be a whopping 19.1%. If this is accurate, it suggests that in the absence of both of these sabotage efforts, unsubsidized 2019 rates would actually decrease by about 4% overall. 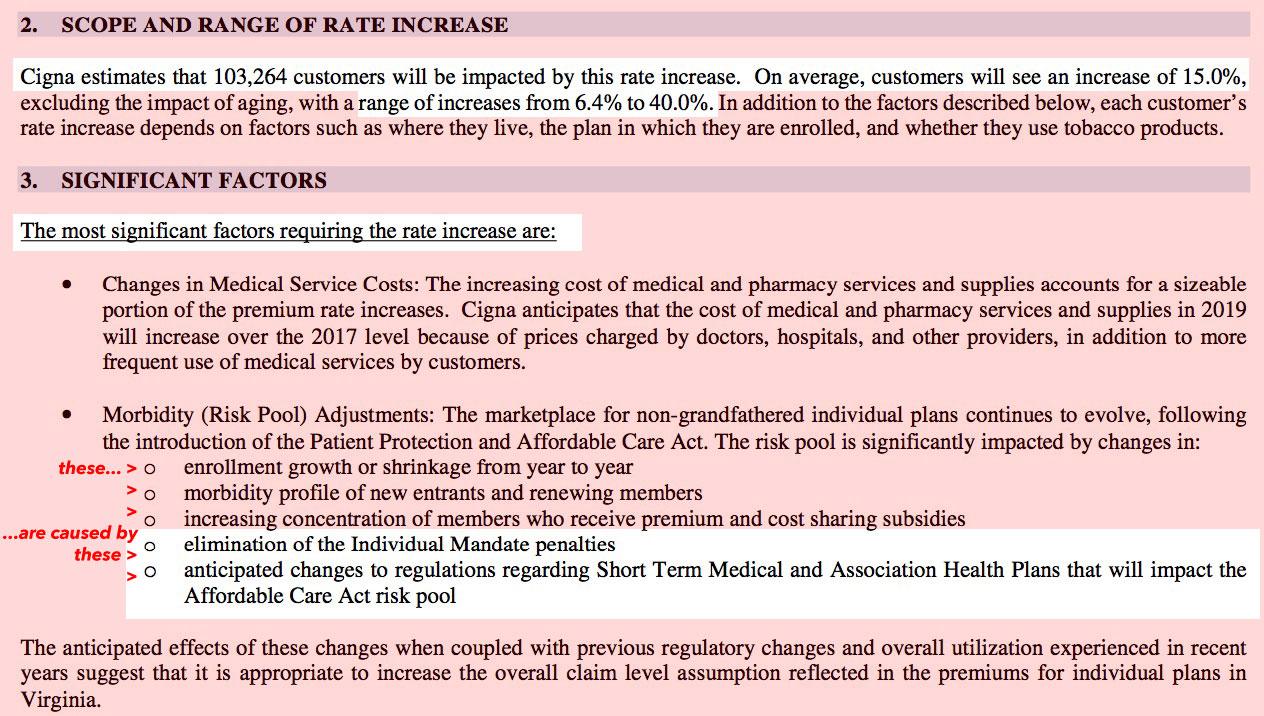 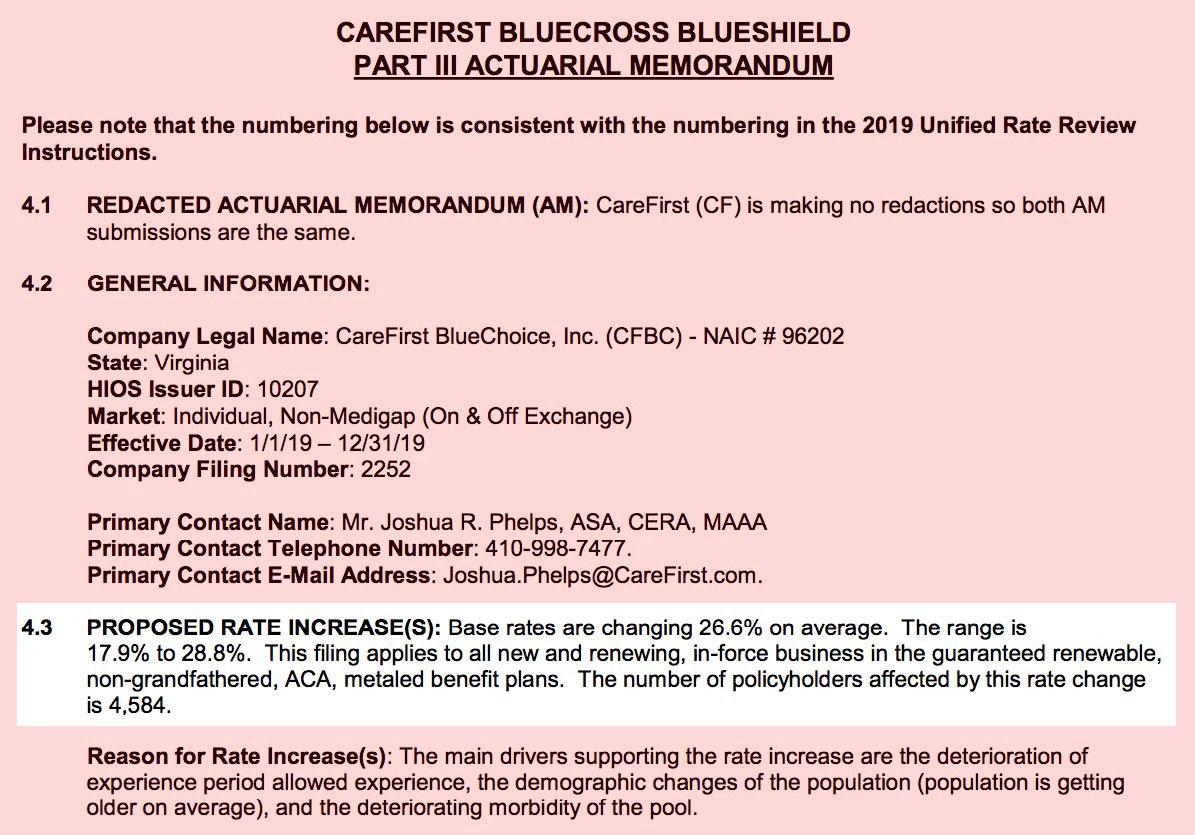 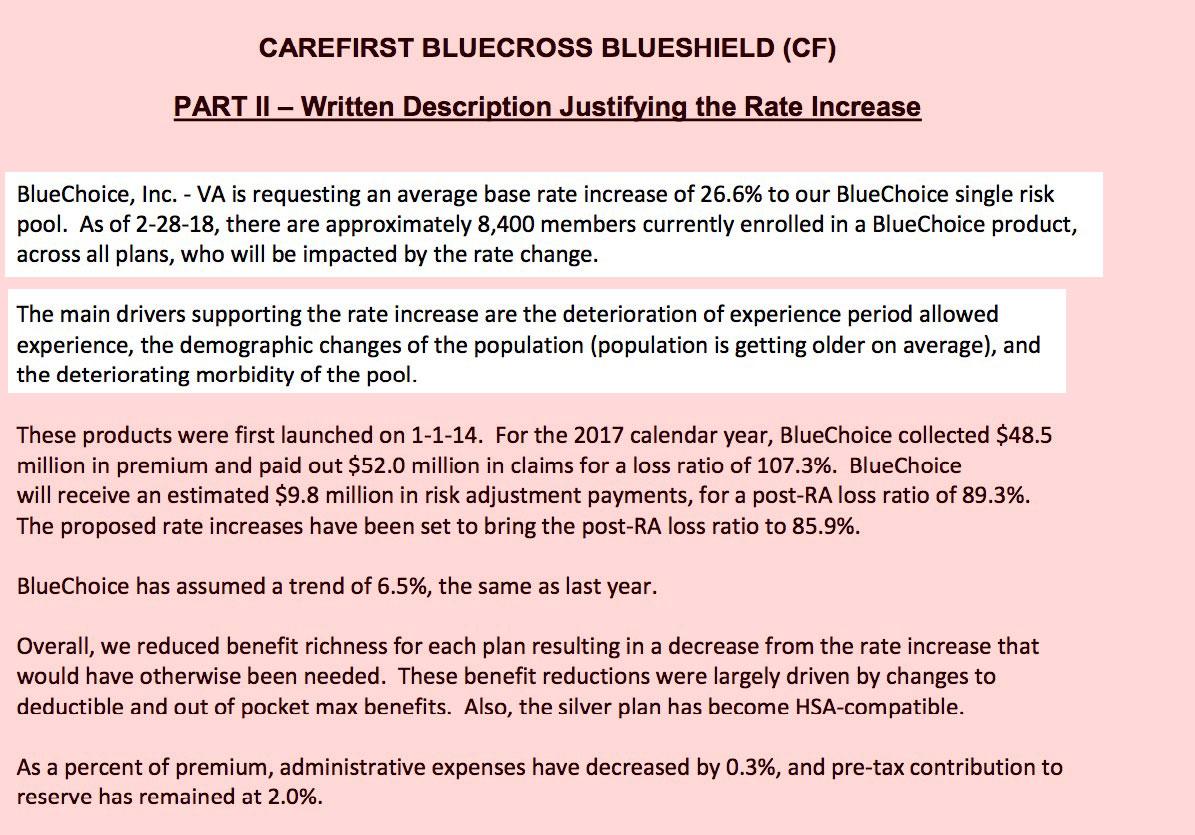 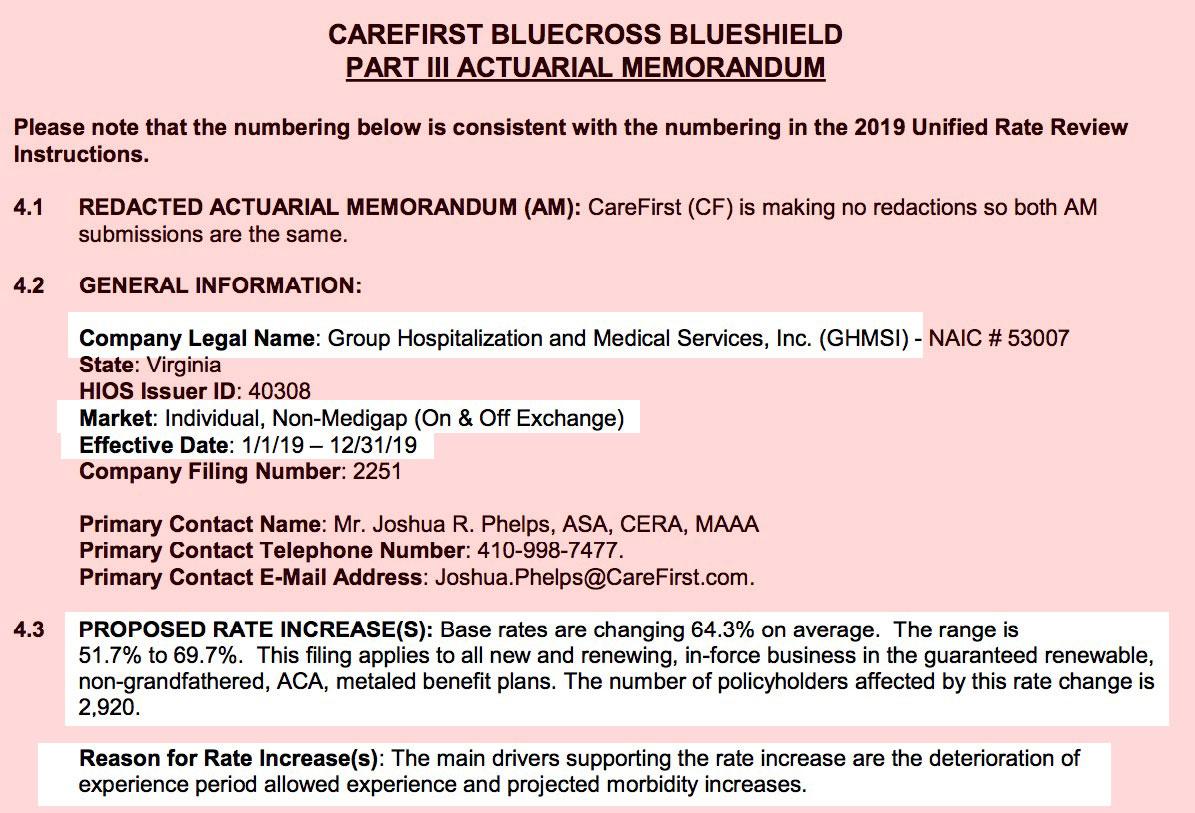 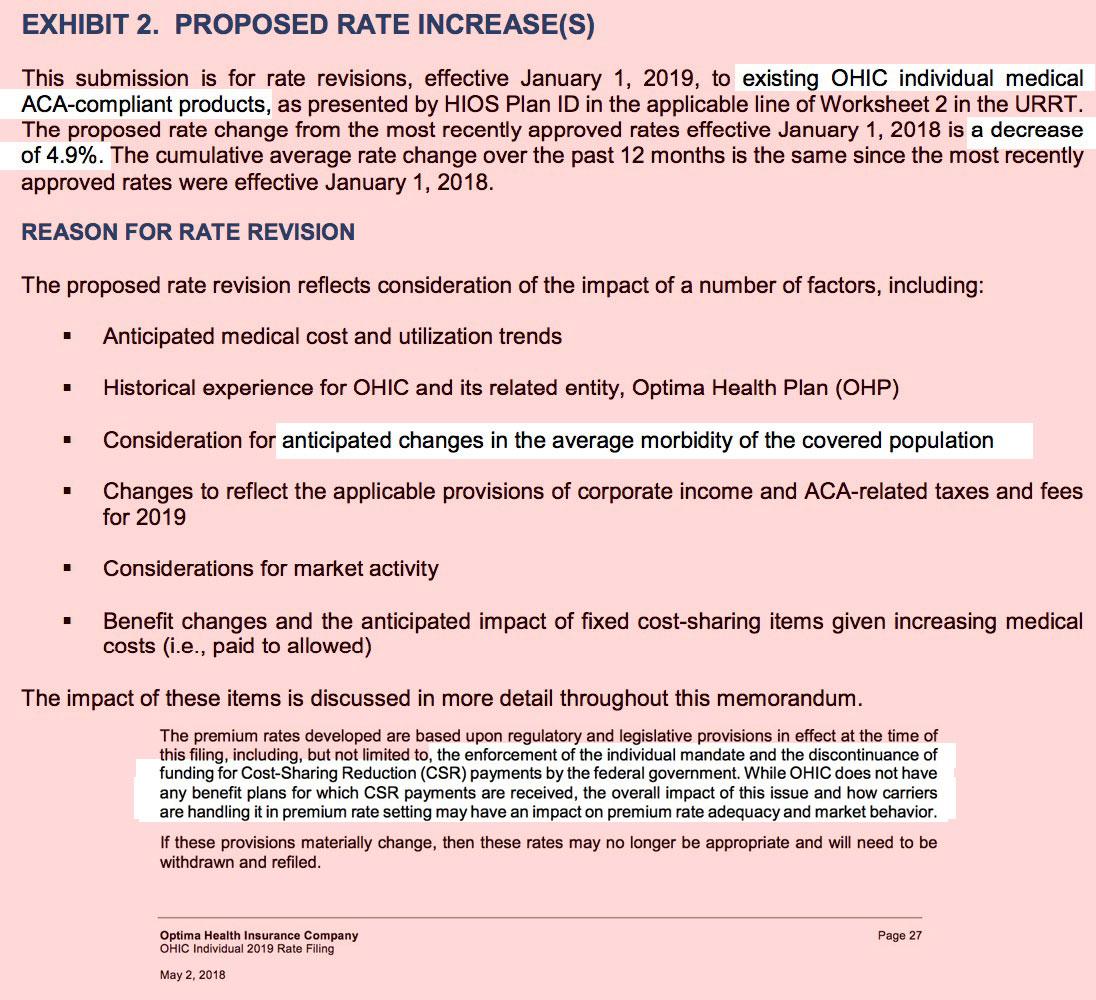 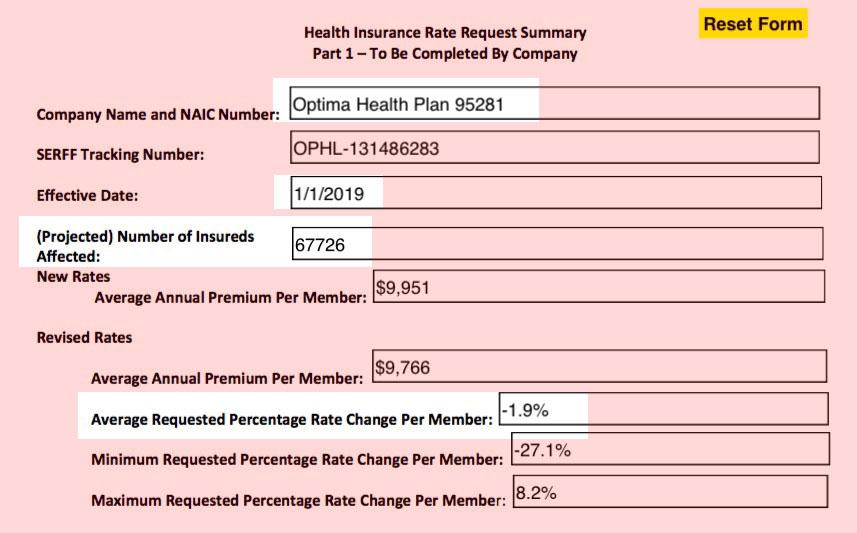 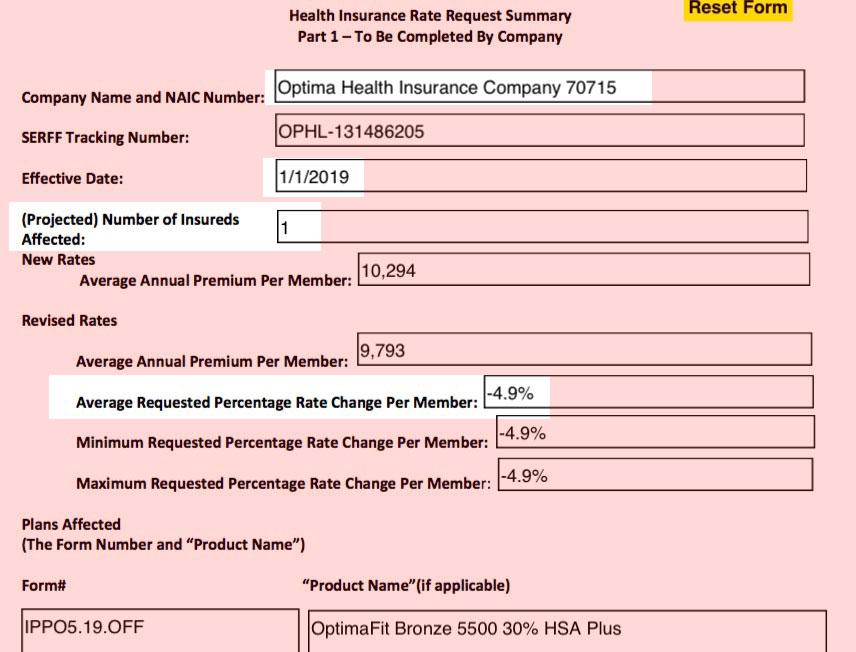 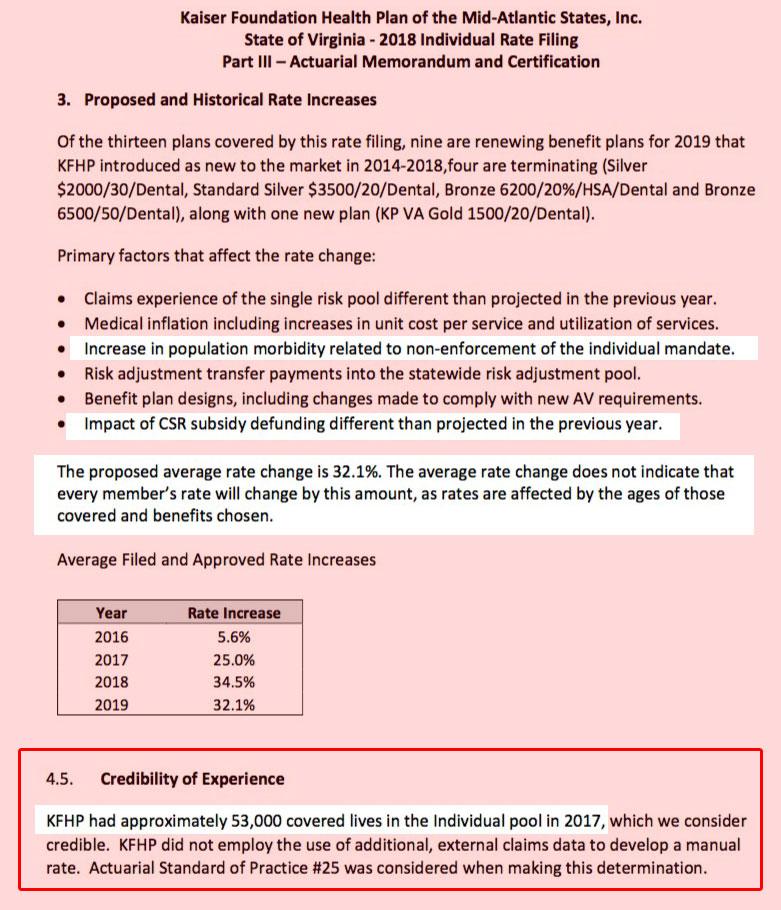 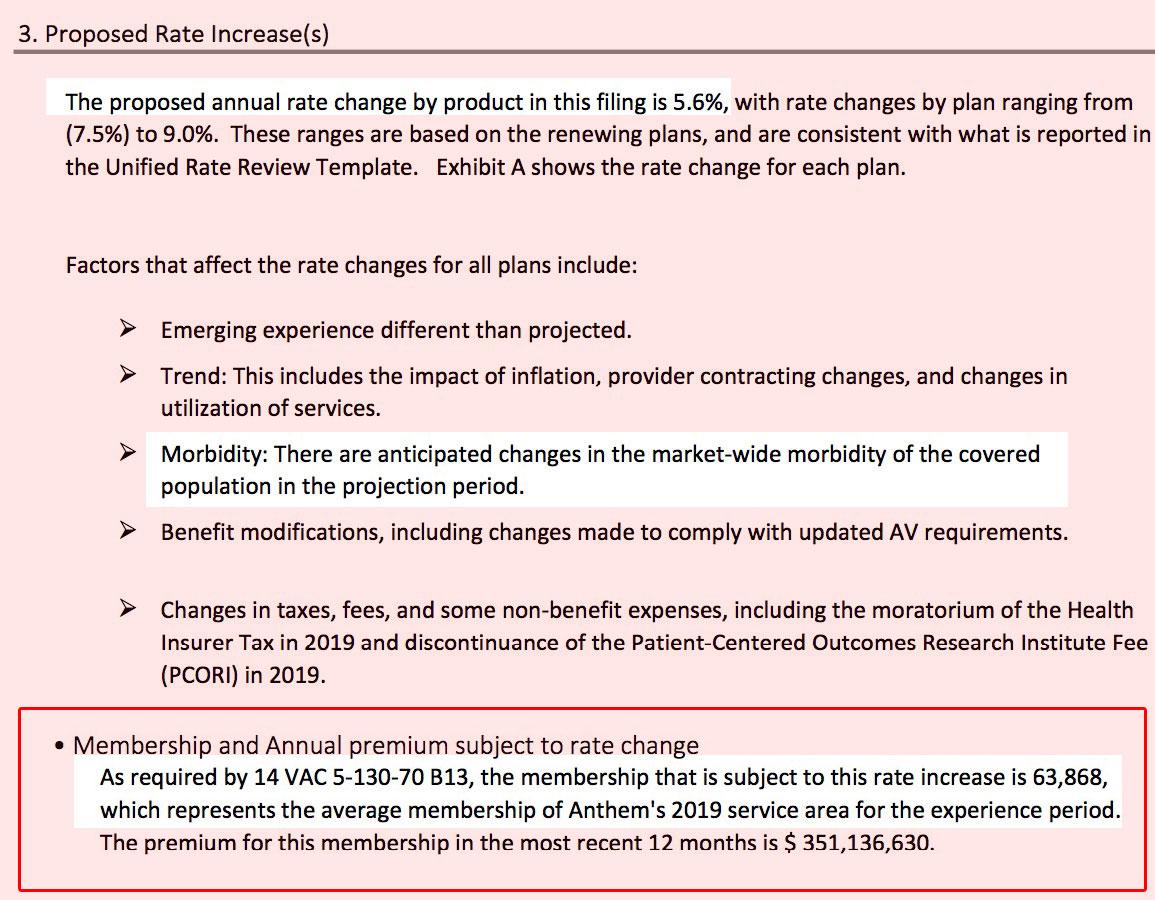