NOTE: The original focus of this diary was on the deliberate sabotage by the Trump Administration/HHS Dept. under Tom Price of the individual insurance market in general and HealthCare.Gov in particular, but the screen shot mentioned in passing in the diary below is actually far more important and disturbing the more I think about it than I had originally thought.

As noted below, it's an anonymous note sent to me on Thursday. Since it was sent I’ve confirmed the identity of the sender. This doesn’t prove that their specific claim is true, but there’s absolutely no reason I can think of for this person to risk their job and reputation by lying about this issue, and it matches everything else in the diary.

Several professional journalists have since contacted me and I’ve gotten them in touch with the sender. Stay tuned, this could be a big deal.

Only Six People Signed Up on Healthcare.gov's First Day

Considering the years-long battle to pass the Affordable Care Act and the lengths to which Democrats went to protect it, the launch of President Obama's healthcare law was something of a disaster, marred mostly by the program's broken website. But now we know just how awful the enrollment numbers were from those first few days.

ccording to documents obtained by CBS News from the House Oversight Committee, just six people enrolled in the program using its website during the first 24 hours, despite the Obama administration's claims of 4.7 million unique visitors to the site over the same time period. And the second day wasn't much better: just 248 people were able to enroll nationwide.

Just a moment ago, President Obama confirmed that "over 670,000" people selected QHPs via HealthCare.Gov yesterday alone. Not quite 700K, but still 12% higher than last year's one-day record.

Combined with Covered California's just-announced 23,000 enrollments yesterday alone, that's 693,000 confirmed for 40 states. I'm estimating when the other 10 states + DC are added in, the grand one-day total was likely close to 800,000 people.

Yes, that's right: The federal ACA exchange, responsible for enrollment across three dozen states (more, actually...it went from 36 states in 2013 to 39 states this year), improved so much over the past four years that it went from only being able to process 6 people on the first 24 hours of operation to over 670,000 on December 15, 2016 alone. Technically speaking, HC.gov's performance has improved by over 111,000 times.

Well, don't be surprised if the Republicanized HealthCare.Gov reverts back to the same miserable, confusing, buggy experience this November that we saw four years ago:

via Sam Stein of the Daily Beast:

The administration is tasked with overseeing the health care law. Instead, it has made a major social media push to undermine it.

The Trump administration has spent taxpayer money meant to encourage enrollment in the Affordable Care Act on a public relations campaign aimed at methodically strangling it.

The effort, which involves a multi-pronged social media push as well as video testimonials designed at damaging public opinion of President Obama’s health care law, is far more robust and sustained than has been publicly revealed or realized.

The strategy has caught the eye of legal experts and Democrats in Congress, who have asked government agencies to investigate whether the administration has misused funds and engaged in covert propaganda in its efforts to damage and overturn the seven-year-old health care law. It’s also roiled Obama administration veterans, who argue that the current White House is not only abdicating its responsibilities to administer the law but sabotaging it in an effort to facilitate its undoing by Congress.

Much of this has been known for awhile now, and of course I've already reported on Trump's HHS Secretary Tom Price, along with Trump's CMS Administrator Seema Verma and ASPE head Stephen Parente releasing jaw-droppingly misleading and/or false statements about ACA enrollment/retention data, premium increases and so forth, including (but not limited to):

...and so on and so forth. All of this, of course, comes on top of the current efforts by Trump and the rest of the Congressional Republicans to sabotage Cost Sharing Reduction reimbursements (responsible for around 57% of the rate hikes being requested by carriers next year) and to prevent enforcement of the individual mandate (responsible for around 14% of the requested rate hikes so far).

This also comes on top of the Trump Administration killing off advertising/outreach during the final, critical week or so of Open Enrollment in January, resulting in an enrollment drop of around 5% year over year even though enrollments had been running slightly ahead of 2016 right up until then...and even though the state-based exchanges, which run their own outreach/marketing programs, actually increased exchange enrollment by 2%.

However, as Stein's article lays out in painful detail, all of the above is likely just the beginning. Here's some of the other crap they've been pulling behind the scenes:

Perhaps the most glaring efforts to publicly undermine the ACA, has come on the Department of Health and Human Service’s own website. In the Obama administration, this piece of online real estate featured direct links for consumers to apply for coverage and infographic breakdowns of the ACA’s benefits and critical dates. Since Trump was inaugurated, it has been retrofitted into an bulletin board for information critical of the law.

Currently, for example, the banner image on the site leads to a page explaining the ways in which the ACA “has done damage to this market and created great burdens for many Americans.” The “Health Care Home” section no longer contains a page on “Delivery System Reform” and “Facts & Figures.” And instead of a readily available link for visitors to access the main sign-up portal for obtaining health care coverage, the site has a post criticizing the now infamous healthcare.gov and encouraging people to use private sector web brokers.

Subtle changes have been made to the “About the ACA” section of the website as well that reflect the current administration’s hostility toward to the law.

The article goes on and on. In addition, I was sent this note yesterday morning: 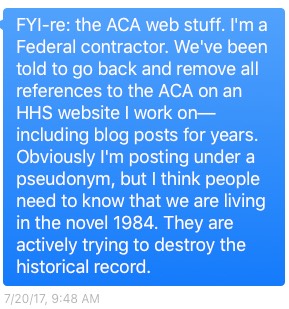 UPDATE: At the time I originally posted this note, I hadn't confirmed/vouched for either the identity of the sender or their claims. Since then, I've received more details which at least make me reasonably confident that they are, in fact, a federal contractor working on an official HHS website. I haven't confirmed the claim regarding being ordered to scrub the site of ACA references as of yet, but everything I do know so far checks out.

Which, of course, is exactly what I warned about back on December 15th, even quoting from the opening pages of...1984:

Hell, for all I know, Price/Verma could even take HealthCare.Gov offline altogether and require people to call in their enrollments or even fill out a paper form (both of which, yes, you can actually do already).

Again, I don't think they would take it quite that far; my guess is that they'll keep the site running mostly as it's supposed to, not doing anything too blatantly obvious...just enough to deliberately increase the general distrust and unease people have over Trump and, more to the point, of "government run healthcare" in general.

Then again, some of these things appear to already be happening:

President Donald Trump’s administration has ended Affordable Care Act contracts that brought assistance into libraries, businesses and urban neighborhoods in 18 cities, meaning shoppers on the insurance exchanges will have fewer places to turn for help signing up for coverage.

Community groups say the move, announced to them by contractors last week, will make it even more difficult to enroll the uninsured and help people already covered re-enroll or shop for a new policy. That’s already a concern because of consumer confusion stemming from the political wrangling in Washington and a shorter enrollment period. People will have 45 days to shop for 2018 coverage, starting Nov. 1 and ending Dec. 15. In previous years, they had twice that much time.

Given everything we've seen so far, not just with Price & HHS but the entire Trump Administration in general...I wouldn't rule any of the above items out. We're in uncharted territory here. The goal of Donald Trump and Tom Price is not to help people sign up for health insurance...their goal is, as they've stated repeatedly, to cause "Obamacare" to "blow up", "explode" and so forth in any way possible.

In a nutshell, the goal of Donald Trump, Tom Price, Seema Verma, Mitch McConnell and Paul Ryan here is simple: To reverse HealthCare.Gov's enrollment growth from 600,000+ people to day back down to 6.

If none of the items on my list prove to come true, no one will be happier than me...especially since my own family is enrolled in an ACA exchange policy. But don't be surprised if some or all of these things happen.