Michigan: Here's the ~878,000 residents who could lose healthcare coverage...BY COUNTY

Regular readers (and Twitter followers) know that for the past month I've been heavily pushing my state-by-state analysis projecting how many people I expect to lose their healthcare coverage if/when the Republican-held Congress follows through on their promise to repeal the Affordable Care Act. As noted in that post and the various links within it, part of the projection is very specific and confirmed (ie, the exact number of Medicaid expansion enrollees), while the rest is more speculative. For one thing, I don't know exactly how many people will have enrolled in ACA exchange plans, because we're still in the middle of the open enrollment period; even then, the percentage of those enrollees who will be receiving APTC assistance is still unknown as well...and even then, not all of those folks will be receiving substantial subsidy assistance which would make or break their ability to keep their policy.

In addition, the "Millennials on their parents' plan due to the ACA" estimates are very rough (and even then, this is the most likely ACA provision to be kept under any GOP "replacement" regardless).

Having said that, nationally, my own best estimate comes in at over 23 million people (12.3 million via Medicaid expansion; around 9 million receiving substantial APTC; around 1.4 million young adults; and around 500K enrolled in Basic Health Programs in New York and Minnesota). The Urban Institute's own analysis, which considers a partial ACA repeal, is even higher: nearly 30 million people, since it assumes the off-exchange individual market would be decimated as well.

A state-by-state breakout is helpful for many reasons, of course. Politically, it's especially handy when it comes to U.S. Senate races (Republicans Jeff Flake of Arizona and Dean Heller of Nevada, both of whom are up for re-election in 2018, are likely sweating this point a bit). However, it's not especially handy when it comes to Congressional races (well...aside from low-population states with only one Representative anyway).

Unfortunately, I don't have the ability (yet) to break out this data by Congressional District. I do, however, have the ability to partly break it out by county (and even by zip code!)...at least in most states.

It would take forever for me to compile this data for all 50 states, and I'm still missing county-level data for Medicaid expansion in most of them...but I do have everything I need to compile a county-level projection for my home state of Michigan, at least.

How? Well, back in July 2016, CMS released a massive Excel spreadsheet which broke out exactly how many people selected Qualified Health Plans (QHPs) via the federal exchange (HealthCare.Gov) by both county and zip code as of the end of last year's Open Enrollment Period. This only covers 38 states, but it's still a huge piece of the puzzle.

Of course, these numbers have to be modified substantially. Around 12.7 million people enrolled nationally during OE3. Both HHS and I projected around 13.8 million will do so this year, although I've since lowered my projection to around 13.3 million, roughly a 5% increase over last year. In Michigan, that was just shy of 346,000 people. Adding 5% to that should bring Michigan's OE4 total up to around 363,000 people who will have selected QHPs via HC.gov by 1/31/17.

Nationally, around 10% of exchange enrollees never end up paying their first premium for one reason or another, and are therefore never actuallly enrolled; this should bring the starting number down to around 327,000. Of those, around 83% of Michigan enrollees will likely be receiving Advance Premium Tax Credit (APTC) assistance...and even then, some number will only receive nominal subsidies (I'm assuming around 10%). Once you whittle it down to only those who are a) enrolled in exchange plans; b) actually pay their premiums and c) are receiving high enough subsidies that taking them away would present a serious hardship, it comes in at around 244,000 people who would almost certainly lose their ability to pay for their exchange policies. I've broken these projections out by county, assuming similar ratios will hold true in each from last year. That's the first half of the equation.

The other half is much easier: The "Healthy Michigan" website (that's our name for the ACA Medicaid expansion program) posts weekly updates of exactly how many people are enrolled by county...currently totalling over 640,000 people.

Add them up and you get around 885,000 people who are nearly certain to lose their coverage if the ACA is repealed. I didn't include the 94,000 "Millennials on parents' plans" since that's so speculative; if I did, the total would be closer to an even million. Still, around 885,000 people seems to be about right...or roughly 9% of the state's population (9.9 million) who'd be utterly screwed.

For example, Oakland County, Michigan (where I live) has around 1.23 million residents. I expect around 57K of them to select QHPs by 1/31, of which around 35K will be receiving significant ACA subsidies for their policies. Another 53K are enrolled in Medicaid via ACA expansion, for a total of around 88,000 people total, or ~7% of the countywide population. In Wayne County (where Detroit is located), it's roughly 11.7%, and so on.

UPDATE 1/28/17: I've lowered my QHP projections for Michigan a bit and now expect it to come in virtually flat over last year, which brings the high-APTC tally down to around 232,000. Meanwhile, the Medicaid expansion numbers have increased by about 4,800 people according to the January 2017 enrollment report. This results in a slightly lower net total of around 878,000 people. 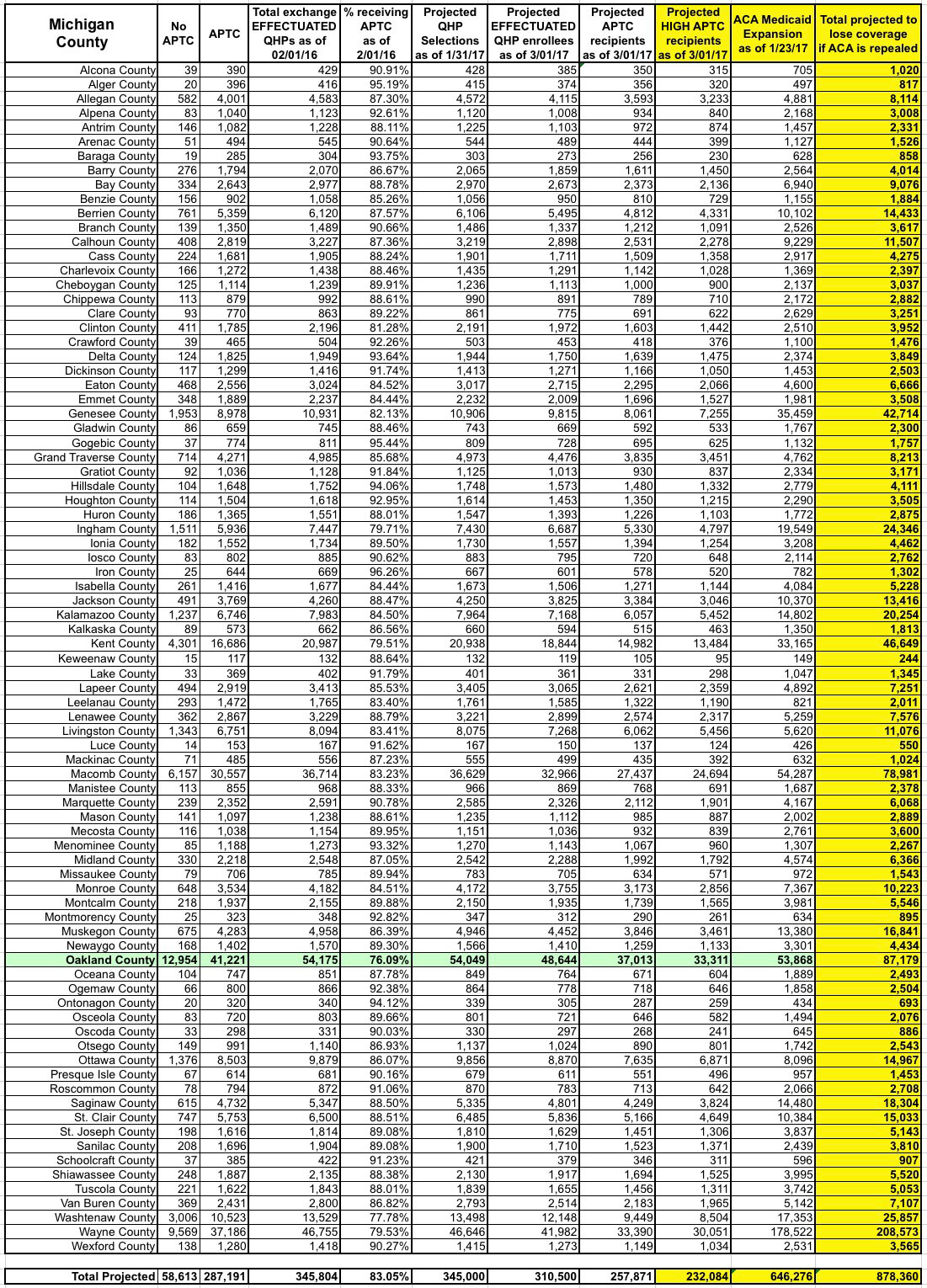 UPDATE: OK, that table is pretty unwieldy, so I've reformatted the key columns into a simpler version: 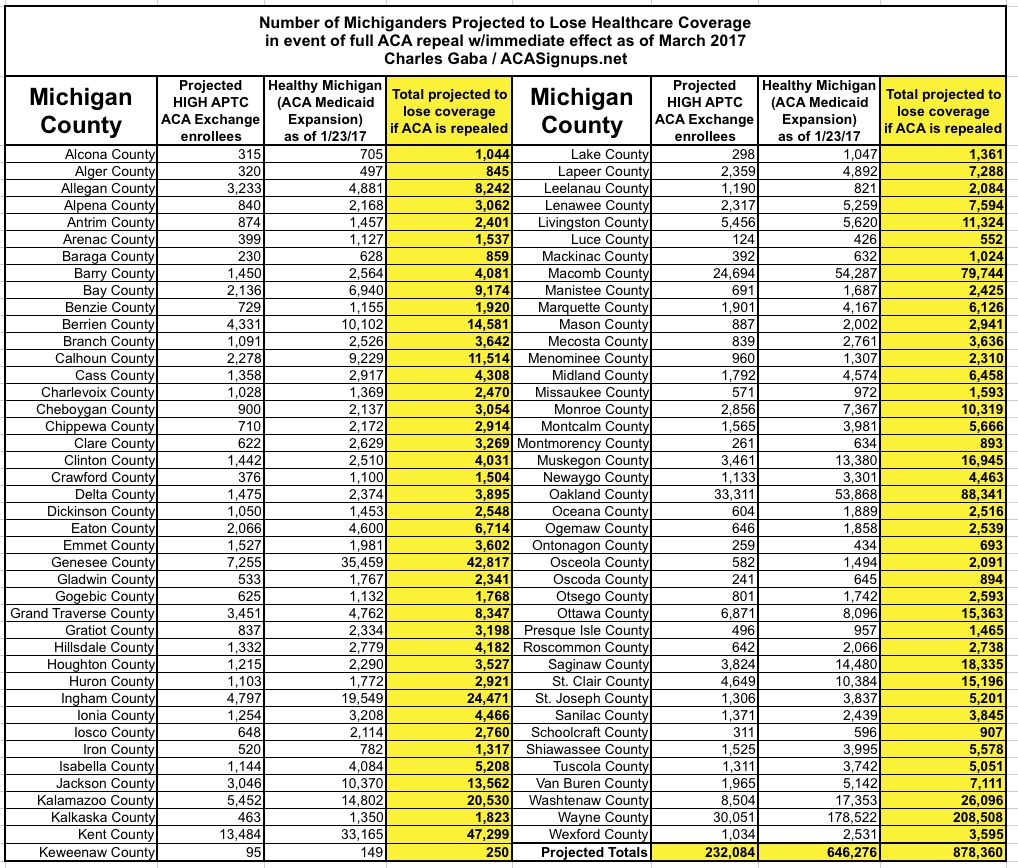