The Kaiser Family Foundation released their monthly tracking poll today. In addition to the usual questions about the ACA (spoiler: Republicans generally don't like it, Democrats generally do, and there's absolutely no consensus about what the public wants to do about it anyway), they also mixed things up a bit by asking timely questions about the Zika virus and increasing insurance policy premiums.

Here's the one which I find the most depressing...but also the least surprising:

...Despite the fact that 83 percent of the public say they have heard or read recent news about rising costs of health insurance premiums, individuals are uncertain about who and which plans are affected. Half of individuals (52 percent) say the reports have been about all insurance plans, 16 percent say the reports have been about just employer-sponsored plans, and one in ten say the news has only been about ACA Marketplace plans. 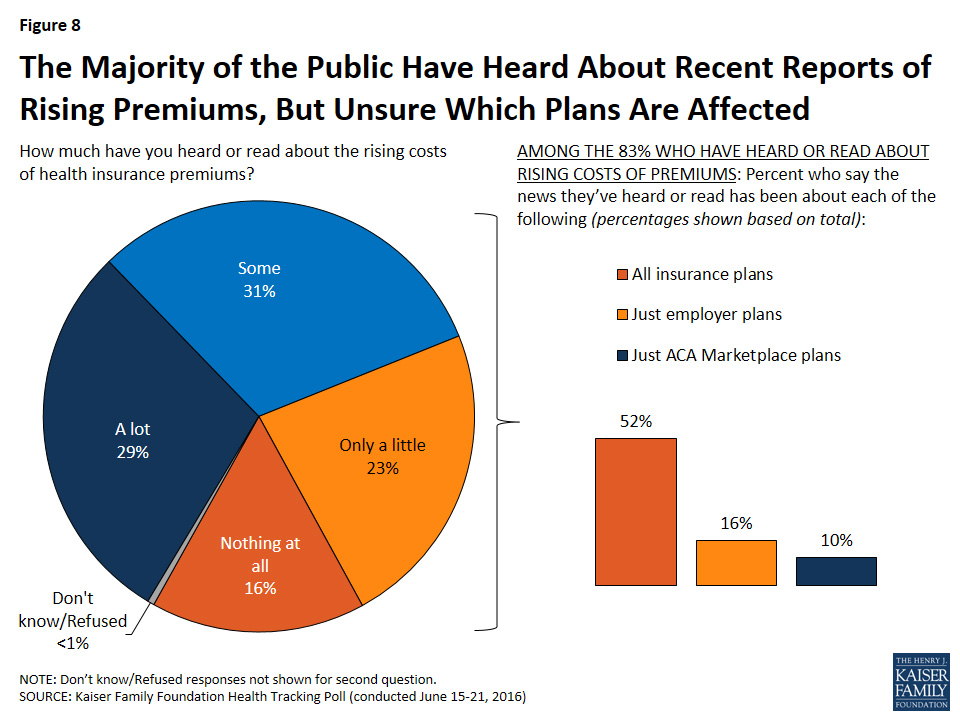 83% have heard about rate hikes, of which 68% think that those reports are referring to either employer-sponsored coverage or the entire private market. That's 56% of all respondants who are under the impression that the 22% average requested (NOT approved, yet) rate hikes for 2017 which they keep reading about here and elsewhere apply to about 172 million people when, in fact, that average only applies to those enrolled in the INDIVIDUAL MARKET...which amounts to around 20.5 million, according to the latest estimate from Mark Farrah Associates.

In fact, it's even fewer than that, because some portion of that market is made of transitional/grandfathered policy enrollees, which I've estimated to be perhaps 2 million people, give or take. That brings the number of people who will potentially be impacted by these particular rate hikes--that is, those enrolled in ACA-compliant private policies--down to around 18.5 million or so. Even then, around half of those folks are receiving APTC financial assistance, which means that their actual premiums will be impacted to a far lesser extent. It's the other 9 million or so folks who need to be directly concerned.

Now, none of this means that ESI or non-ACA compliant plans aren't seeing some rate increases as well...but those that's not at all what any of the screaming headlines have been about. Besides, small group rate hikes (the small group market is roughly the same size as the indy market, around 17 million in 2013, likely a couple million higher by now) are coming out as much lower than the individual market anyway, and in some cases are even dropping on average. For instance:

The ACA-compliant indy and small group markets each contain around 18-19 million people apiece. In the above 9 states, the (unweighted) average is roughly 17.4% on the individual market vs. around 7-8% on the small group market. In other words, requested rate hikes are averaging less than half as much for small business plans than on individual plans. Assuming this is representative nationally (and again, this is just some back-of-the-envelope math), this suggests that carriers are requesting an average rate hike of around 9-10% for small group plans next year vs. the 21.7% average individual market request.

I cannot stress enough, however, that I haven't done nearly as much number-crunching for the small group plans as I have on the indy market; if I can find the time to so methodically I will, but in the meantime this should be a pretty good ballpark estimate.

I should also note that none of the above applies to the LARGE group market, which makes up an additional whopping 100 million or so people nationally. I haven't even tried to crunch the lg. group numbers.