Last week I took the known 2016 Florida rate increase requests (around 14.7% weighted average for 10 companies with around 713,000 enrollees) and took my best shot at trying to estimate what the rest of Florida's ACA-compliant individual market might look like.

In order to do this properly, I'd need 2 pieces of data: First, the weighted average increase request for the 6 additional companies which I didn't already have rate requests for; and second, the total ACA-compliant enrollment number for those 6 companies.

For the first number, I didn't know what the weighted average for those 6 companies was, but I did know that none of them had asked for increases higher than 9.9%...because if they had broken 10%, they would have shown up on HealthCare.Gov's Rate Review website. That at least gave me a ceiling. As for a floor, it's conceivable that any or all 6 of them requested average rate decreases (<0%), but I'll be a realist and assume that even if one or two did so, the weighted average of all six is still likely to be an increase of somewhere between 4.0 - 9.9%.

That left me with the other unknown: Just how many ACA-compliant individual market enrollees there currently are state-wide. I knew that the first 10 companies had 713K people, but what was the total?

At the time, the only hard number I had for Florida's total individual market was from the Kaiser Family Foundation (1.5 million...actually, 1,499,569 to be precise), but that has two problems: First, it's outdated, as it only runs through 2014; second, it includes several hundred thousand non-ACA compliant "grandfathered" and "transitional" plan enrollees, which are in a separate risk pool and thus can't be included in these rate averages. However, that was all I had to work with, so I estimated that the total ACA-compliant market was probably somewhere around 1.35 million. Based on that estimate, I concluded that Florida's overall weighted average increase is likely somewhere between 12.4 - 16.8%.

Today, however, I'm pleased to report that thanks to some serious investigative journalism (which amounted to--drumroll, please--sending a polite email to the Florida Office of Insurance Regulation and asking), I now have the actual total number of ACA-compliant enrollees:

Well, now. That's a whole lot of highly-useful information packed into one simple table. It tells us a lot of interesting stuff:

Here's the really good news: Since the number of enrollees looking at a higher than 10% requested hike is already known (713,600 people), that means that every additional enrollee in a policy requesting less than a 10% hike automatically lowers the statewide average further.

HOWEVER, the second tally is actually around 940,000...which gives us the following: 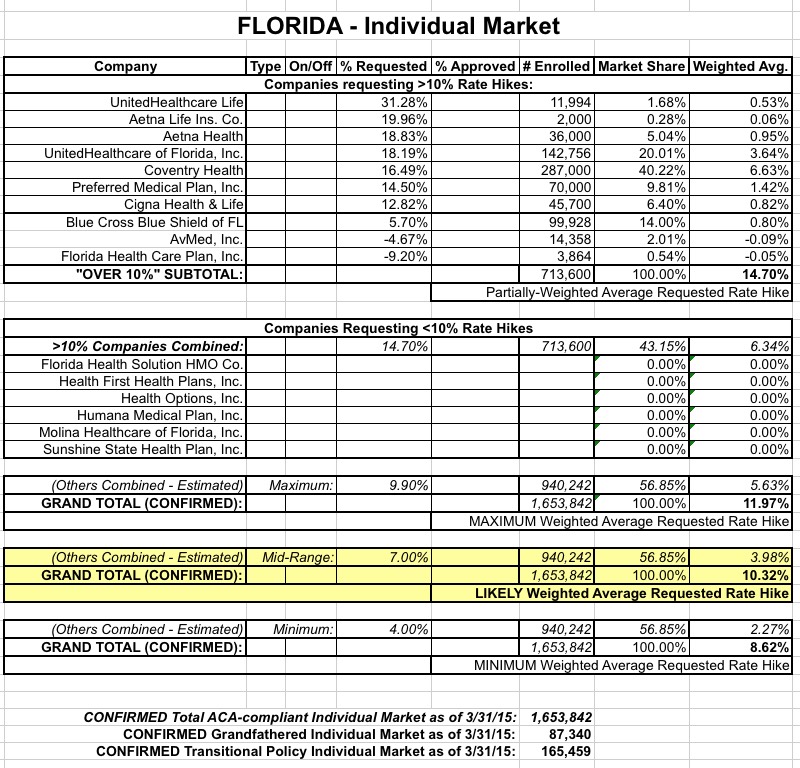 Yep, that's right: The maximum possible weighted average increase for Florida is just under 12.0% (assuming 9.9% for all of the unknown carriers), and the likely increase is somewhat lower than that--around 10.3% assuming a 7% average for the unknowns or just 8.6% assuming a 4% average. In the interest of caution, I'm going to use the "mid-range" (10.3%) as my baseline here.

So, there you have it: Assuming the Florida regulators grant all 16 companies what they're asking for, the Sunshine State is looking at somewhere between 10.3 - 12.0% hikes overall.

This isn't great news, but it's pretty much in line with the 10-12% pre-ACA annual rate hike which the individual market saw nationally...and is a lot less scary than the 31% outlier you see at the top of the graph for UnitedHealthcare.

One other thing: According to the HHS Dept, as of March 31st there were actually 1,415,981 Floridians enrolled in effectuated policies via Healthcare.Gov...over 137,000 more than the Florida Office of Insurance Regulation claims. I have no idea what to make of that discrepancy, which is pretty big to be a "rounding error".