For those who just want the capsule version, here it is:

The official ACA Medicaid/CHIP enrollment number that the HHS Dept. has been touting up until now has been 3.9 Million. The number that I've been claiming on the spreadsheet is currently around 4.5 Million. However, based on a very detailed analysis of the first 3 HHS reports, as well as the 2 CMS reports issued last fall, I've concluded that the actual grand total of Medicaid/CHIP enrollments since the ACA exchanges launched on October 1st is actually even higher, possibly as many as 6.4 Million. While they can't officially confirm my numbers and some caveats apply (described below), a CMS official did review my work and concluded that "the methodology appears to be accurate".

Now, before everyone starts freaking out about this claim--and it's an admittedly major one--I want to make two VERY important caveats:

First: I could be wrong, plain and simple. I've double-checked my math and my logic the best I can, and have also cross-checked it with a CMS official to be sure, but some of these numbers get kind of squirrelly. If I'm wrong about this, so be it, but if so, it's due to an honest misunderstanding on my part and is not out of any attempt to "unskew the numbers" or "cook the books". I'd say I'm about 95% sure that I'm correct, but there's too many unknowns for me to be 100% confident.

Second: Even if I'm correct, it doesn't change the fact that all 3 numbers (3.9M, 4.5M or 6.4M) include an unknown number of Medicaid/CHIP redeterminations (i.e., people who were already on Medicaid prior to the new expansion rules who are simply renewing their enrollments).

OK, with those two cop-outs clearly stated, let's dig into the weeds a bit.

If you look at Week 11 on the spreadsheet, you'll see that around mid- to late-December, the Medicaid total was roughly 2 million total. Then, in Week 12, it suddenly jumped up to around 3.9 million. Where did the extra 1.85 million come from? Well, if you look at the bottom of the spreadsheet, under "Additional Enrollments Not Broken Out By State", you'll see a whopping 1.85M added to the Medicaid tally as of 12/20.

The reason for this was a report issued by the CMS stating that 3.9 million people had been enrolled in Medicaid/CHIP in October & November. Since I already had around 2 million enrollments accounted for, I wasn't sure where the rest belonged, so I just added them there for the time being until I could figure out which states they belonged under. As additional Medicaid numbers came in after 11/30, I added them to the corresponding state tally, using 3.9M as the new "starting point" as of the beginning of December. I was assuming at the time that the "one-time special transfers" such as California's 600K+ LIHP transfer and the 130K that Massachusetts transferred over from Commonwealth Care were already included in that 3.9 million lump sum figure.

This continued into Week 13 and 14, culminating in a total of roughly 4.4 million total Medicaid/CHIP enrollments as of the 1st week of January.

However, this never really sat well with me, and my concerns were proven correct when the December HHS report came out earlier this week. According to it, as of December 28th, there were only about 1.58 million Medicaid/CHIP enrollments total...only 40% of the 3.9 million figure that CMS had been boasting of a month earlier, and only 35% of the 4.4 million I had as of early January.

In addition, a friend pointed out the following footnote on the December HHS report (emphasis mine):

Oh, they also informed me that some state IT systems have the ability to separate out new enrollees from renewals but others don't, which explains why they're all lumped together in both the HHS and CMS reports. (So far,  the State of Washington is the only one I know of that reports renewals separately).

1/17/14 UPDATE: Well, this is interesting. Just hours after I posted this entry, several states released updated numbers, and 2 of them (Colorado & Maryland) included information about...how many are redeterminations/reenrollments. Colorado clearly stated that their Medicaid numbers don't include them, while Maryland was a bit more confusingly worded but seemed to indicate a drop of 13,000 from the HHS tally due to those being reenrollments.

So, now we have a rather complicated problem, best illustrated using a 3x3 grid. I whipped up a crude grid; I thought about cleaning it up here, but decided to upload the same graphic that I sent to my CMS contact. Let's play Medicaid Tic-Tac-Toe! 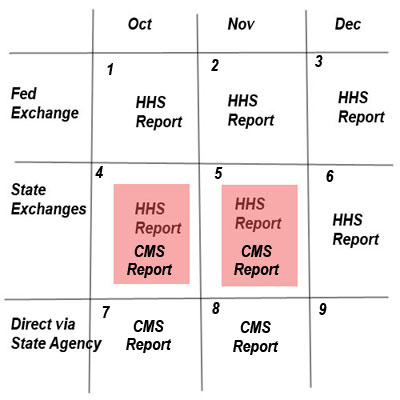 As a result, the two types of reports actually overlap in two squares (duplicate numbers), yet one of the 9 squares is still left open (direct enrollments in December).

I asked the CMS official whether the solution would be to separate out the state & federal exchange numbers, then add together the numbers as follows:

The response from the CMS official was short and to the point: Yes, this makes sense.

So, I went ahead and did exactly that the other day. I've posted a screenshot of the spreadsheet below (click on it for the full-size version). You can even download the actual Excel spreadsheet file itself if you wish. The yellow columns are included in order to illustrate that the numbers all add up correctly across, down and otherwise for each report; they are not included in the actual totals in column L at the right, which only includes columns B, D, G, H, I and J: 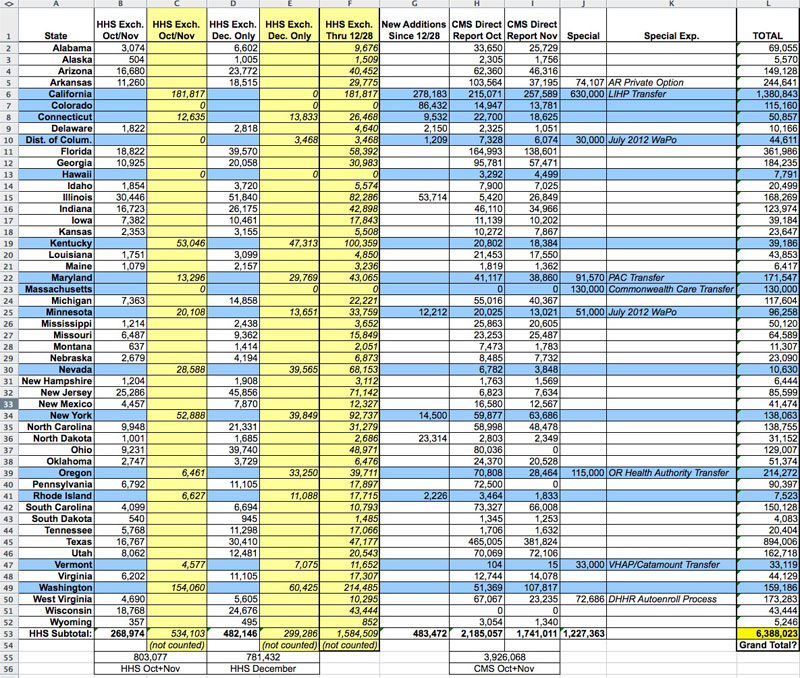 When you tally up all of these numbers, you end up with a final tally of....6.388 Million.

And again, this still doesn't include the 9th cell, which is direct enrollments for any state in December, although I presume that some of the additions in column G probably represent some of these.

When I presented this to the official at CMS, they stated that the methodology appears to be accurate, although they cannot presently confirm the numbers, with the following caveats:

Regarding this last point, I'd have to check directly with the individual state agencies to clarify whether I'm double-counting them or not, but in most cases it's pretty obvious that I'm not. For instance:

That only leaves Arkansas, Oregon and West Virginia as possibly being double-counted. If this is the case for all 3 states, then the grand total would be closer to 6.1 million instead of 6.4; while I'd happily correct the total, my larger point would still be valid.

This morning I received an indirect (but nonetheless legitimate) confirmation from Glenn Kessler at the Washington Post's Fact Checker, who, ironically, made the exact same point while badmouthing the Medicaid figure.

In running his numbers, Kessler adds together the October & November numbers from both the HHS and CMS reports for those months and calls it a day, with a grand total of around 4.6 million:

“Additionally, 3.9 million Americans learned they’re eligible for coverage through Medicaid and the Children’s Health Insurance Program (CHIP) in October and November. These numbers include new eligibility determinations and some Medicaid and CHIP renewals.”

The word “some” should be a tip-off. Here’s what the number actually includes:

At first glance, one could deduce that this is essentially an accounting of everyone who signed up for Medicaid in October and November. But there is actually one piece missing:

• Any of the Medicaid or CHIP eligibility determinations made through healthcare.gov. (Through November, that figure was about 750,000.)

In theory, if you wanted to know the universe of people who actually were deemed to be eligible for Medicaid in those two months, you would need to combine 3.9 million and 750,000, though CMS concedes that there is probably some duplication.

Eventually all those people who are deemed eligible for Medicaid through healthcare.gov will end up being reported by the states back to CMS, so that’s why CMS does not combine the two figures.  (Meanwhile, as The Washington Post reported, more than 100,000 also failed to be reported to states because of software defects.) But, for the moment, you could say that about 4.6 million people were found to be eligible for Medicaid and CHIP in October and November.

First of all, Kessler's reference to "750,000 Medicaid/CHIP eligibility determinations made through healthcare.gov through November" is, quite simply, wrong. For October & November, this number is actually only 269,000. If you also include December in that figure, however, it does indeed total around 750,000.

[Update: Mr. Kessler has since corrected the error on his Fact Check piece; this doesn't really impact anything else in either his or my own stories, however]

However, you'll notice that Kessler's Fact Check failed to include two other important numbers:

Now, I do understand, to some degree, why Kessler didn't include these. He was checking a very specific claim (the 6M total claim in Pres. Obama's tweet) made on a very specific date, which was based on a very specific report. The 3.9 Million portion of the "6 Million Covered" did indeed come from the CMS report of December 20...which only included numbers from October and November. The December HHS report wasn't released until January 13th. Since the tweet he's checking was released on January 10th, he could argue that December shouldn't have been included in his "Fact Check" of a Jan. 10th tweet.

Ironically, from what I can tell, he did include the December exchange numbers, but didn't think he was.

In any event, it is now January 16th, and the December report has been released...which means that the December Medicaid/CHIP enrollments have also been released (at least for the exchanges, though not the direct enrollments). In fact, there have even been a few additional updates even since then (the HHS report only runs through 12/28, meaning up to 18 more days' worth of numbers could potentially be added by now).

When you do so, you find the actual numbers to be:

So, just to reiterate, the grand total of Medicaid/CHIP enrollments from October 1st, 2013 through January 15, 2014 are somewhere between 4.6 million and 6.4 million people.

Caveats which could reduce the number from the 6.4M high end include:

I'll leave the spreadsheet set to the current 4.5M tally for a day or so after publishing this lengthy screed; unless someone can verifiably contest the numbers by a notable amount, I'll be updating the spreadsheet with the new numbers laid out in this report over the weekend. (see update below)

And with that, I'm calling it a day.

Furthermore, Colorado's official report specifically states that it includes all new Medicaid enrollments, not just via the exchange but direct ones as well, in a single report. This means no guessing about whether Colorado's numbers are being double-counted or if they overlap; that 101,730 Colorado Medicaid enrollment figure from 2 days ago is THE Medicaid number to use, period.

The bad news is that for the other 49 states (+DC), sorting out the individual state numbers as laid out above in any sort of coherent way on the spreadsheet itself would simply be too damned confusing for anyone to be able to follow. I had planned on doing this tonight, but after several hours of experimenting with extra rows, extra columns and so on, it's just too Herculean a task to pull off without making the entire spreadsheet an indecipherable mess.

So, until further notice, I'm going to have to backtrack on my "update the spreadsheet with the new numbers" statement above and leave things pretty much as they are, at roughly 4.5 million.