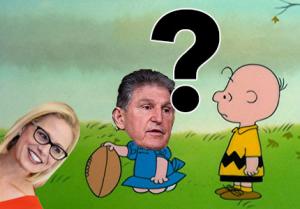 All three of these are still important things to accomplish, but so many other important provisions would be lost...especially the $500 billion climate change section.

As much as this sucked, Dems up and down the pecking order resigned themselves to taking what they could get and hoping to have enough power after the midterms to be able to take another shot next year.

And then, yesterday afternoon, like a plot twist of a bad movie, something unexpected happened:

.@Sen_JoeManchin says he’s reached a deal with @SenSchumer on the “Inflation Reduction Act of 2022,” but there’s no text yet

At first this was a bit confusing due to the vaguely-worded title of the bill, but Manchin's actual statement made it clear that somehow, behind the scenes, various last-minute negotiations had expanded the scope of the remnants of what was left of the BBB reconciliation bill somewhat:

...The Inflation Reduction Act of 2022 will address record inflation by paying down our national debt, lowering energy costs and lowering healthcare costs.

...Based on that work, I now propose and will vote for the Inflation Reduction Act of 2022. Rather than risking more inflation with trillions in new spending, this bill will cut the inflation taxes Americans are paying, lower the cost of health insurance and prescription drugs, and ensure our country invests in the energy security and climate change solutions we need to remain a global superpower through innovation rather than elimination.

OK, so what's actually in the new bill? Here's the one-page summary:

The Inflation Reduction Act of 2022 will make a historic down payment on deficit reduction to fight inflation, invest in domestic energy production and manufacturing, and reduce carbon emissions by roughly 40 percent by 2030.

The bill will also finally allow Medicare to negotiate for prescription drug prices and extend the expanded Affordable Care Act program for three years, through 2025.

The new proposal for the FY2022 Budget Reconciliation bill will invest approximately $300 billion in Deficit Reduction and $369 billion in Energy Security and Climate Change programs over the next ten years.

Additionally, the agreement calls for comprehensive Permitting reform legislation to be passed before the end of the fiscal year.

Permitting reform is essential to unlocking domestic energy and transmission projects, which will lower costs for consumers and help us meet our long-term emissions goals.

Manchin has yanked the football away from Charlie Brown so many times over the past year or so that it's easy to be skeptical, although this time he's officially "owning" the bill and states unequivocally that he will vote for it.

Of course, that kicks the ball over to Sen. Kyrsten Sinema, who also has a long history of inscrutable motivations and logic...and there's still a handful of centrist House Democrats who are going to cry foul over the SALT provisions.

SALT: @Malinowski and @RepTomSuozzi are lining up to support Senate deal despite no lifting of SALT cap.

OK, good...although there's still a few others in the House like Josh Gottheimer to look out for...but this is promising, as is this:

For months, progressives have advocated for a reconciliation bill on policies with consensus across the Democratic Caucus: climate, health care, and tax fairness.

We'll need to evaluate the details, but it's promising a deal to deliver on those issues might finally be in reach.

Sounds like both the progressive and centrist ends of the Democratic spectrum are on board...I think.

So...this still isn't a certain thing, and I won't believe it's happening until it actually passes both the House and Senate and is signed into law by President Biden.

I should also note that there's several inside baseball political wonk types like Josh Marshall of Talking Points Memo who think that this whole "the deal is dead / the deal is alive!" thing was deliberately concocted by Senate Majority Leader Chuck Schumer and Sen. Manchin as a way of making sure the CHIPs bill (as in, computer microprocessor manufacturing, not the Children's Health Insurance Program) would make it through the Senate yesterday:

In case you didn’t notice I wanted to draw your attention to one thing. While Senator Schumer and the White House were trying to revive some skinny version of the BBB and climate legislation with Joe Manchin Senator McConnell tried to scuttle those talks with a threat. He would pull GOP support from the China competition/CHIPs bill if the Democrats did not drop those negotiations.

As it happened, Manchin scuttled the deal so the threat became moot. Then the CHIPs bill passed the Senate yesterday and then within like an hour – voila – the Manchin deal was back and somehow finalized. Senate Republicans were clearly pissed but the bill had already passed the Senate.

Is this what happened? It certainly makes as much sense as anything other explanation, and more sense than some.

In any event, let's take a look. Plenty of others have written/are writing up explainers about the climate change and tax code provisions; I'm just gonna focus on the healthcare-related sections for obvious reasons.

First and foremost, the enhanced ARP subsidies would be extended by three years instead of two. While this is a far cry from permanently upgrading the subsidies (which is what should happen), it's still a year longer than the two years Manchin had previously agreed to.

The irony here is that one of Manchin's biggest stated beefs with BBB last fall was that many of the provisions, including the extended ARP subsidies, were only temporary; he insisted that they had to be permanent.

Obviously I want them to be made permanent as well, but he was the one who shortened the BBB's three-year extension down to two...only to now agree that it be three again.

More importantly, it takes away the risk of ARP subsidies expiring before the 2024 Presidential election; if Democrats end up losing control of the House this fall, as most people expect them to, it would give them a shot at retaking it and extending the subsidies permanently in 2025. So...that's something.

In addition, the wording of the ARP subsidy section in the text (which was made available shortly after the news first broke) makes it clear that, again, after all his fuss a month ago about demanding that the ARP subsidies be means tested beyond what they already are, in the end it looks like they'll be extended exactly as they have been for the past year and a half under the American Rescue Plan itself:

(b) EXTENSION THROUGH 2025 OF RULE TO ALLOW CREDIT TO TAXPAYERS WHOSE HOUSEHOLD INCOME EXCEEDS 400 PERCENT OF THE POVERTY LINE.

(c) EFFECTIVE DATE.—The amendments made by this section shall apply to taxable years beginning after December 31, 2022.

OK, what else? The Kaiser Family Foundation has put together a simple summary of the various prescription drug provisions:

While the Medicare price negotiation provision seems fairly modest (it only includes 10 drugs at first, ramping up to 20 over time, and wouldn't even start until 2026), it's still an important foot in the door, which explains why the pharmaceutical industry is still fighting tooth & nail against even this.

It seems to me this is actually a bigger deal than the negotiation but I could be wrong...and the fact that it would apply to private insurance as well as Medicare makes it an even bigger deal.

Capping Part D spending at $2,000/year was included in the original BBB bill, and was re-introduced as a standalone bill by Georgia Sen. Raphael Warnock. It would save at least 1.2 million Medicare Part D enrollees who currently spend more than $2,000/year on prescription drugs an average of over $1,200/year.

The "Part D Low-Income Subsidy Program" expansion would raise the threshold for full benefit qualification from 135% of the Federal Poverty Level to 150% FPL (currently they're only eligible for partial benefits between 135 - 150% FPL).

I don't understand Trump's drug rebate rule or how repealing it permanently would save money, but apparently it would.

As for what's not included, the single biggest missing healthcare-related item I can think of is closure of the Medicaid Gap in the 12 remaining non-expansion states (along with the ARP subsidies only being bumped out for 3 years instead of permanently). But still.

In any event, while this still isn't locked in and it's still a much smaller package than the BBB bill would have been, it's also a much better deal than anyone would've thought possible just 24 hours ago, which shows just how quickly the narrative can change in DC.