Sen. Manchin open to permanent #ARP subsidies, as long as they're means tested. They already are. (updated) 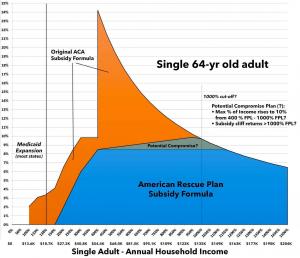 (sigh) The Sword of Damocles continues to dangle over the head of the Affordable Care Act. This time it isn't about an existential threat to the PPACA, at least...but the expanded/enhanced subsidies which were put into place temporarily by the American Rescue Plan (ARP) are definitely at risk.

Just a week or so ago, things were looking promising...

Conversations are underway between Joe Manchin III, D-W.Va., and Senate Majority Leader Charles E. Schumer to negotiate a budget reconciliation bill, which would require only a simple majority for passage, that would meet Manchin’s demands without losing support from other Democrats.

...Another Manchin condition is that the measure avoid any “cliffs” that sunset new programs early to keep the price tag down, something Manchin argues artificially hides the true costs since programs will prove too popular not to extend.

As a result, adding a permanent extension of expanded tax credits that make health insurance purchased on the 2010 health care law’s exchanges more affordable has become part of the conversation. That would cost around $220 billion, according to the CBO.

House Speaker Nancy Pelosi (D-CA) said Thursday (June 16) that budget reconciliation legislation might not extend an increase in subsidies for health exchange insurance premiums; the subsidies are needed to avert a spike in Obamacare insurance rates right before the midterm elections.

...When a Punchbowl News reporter asked Thursday about that meeting and whether a reconciliation deal is expected soon, Pelosi’s response was, “It’s alive.”

“There are certain concerns we have about subsidies in the health care bill and the rest, which may or may not be in the negotiations,” she said.

As I noted in my own write-up on this, however:

It's entirely possible--and I've heard from at least one reliable source that this is likely the case--that the enhanced subsidies will be included, but not at quite as generous a level or possibly with the return of a higher subsidy cliff than the original 400% FPL threshold.

...which, sure enough, brings us to today's development, via Joseph Zeballos-Roig of Business Insider:

Sen. Joe Manchin of West Virginia signaled he's open to extending enhanced subsidies under the Affordable Care Act, a move that would help Democrats avert a huge political threat in the November midterms from millions of people learning about spiking monthly premiums only weeks before casting ballots.

The conservative Democrat reiterated his concern about Americans enduring a difficult stretch of inflation, which reached its highest level in four decades. But he suggested that an extension of the program should be directed towards aiding lower-earning families.

"The main thing here is the means-testing," he said in a brief interview on Wednesday evening. "We should be helping the people who really need it the most and are really having the hardest time."

"With healthcare, people need help. They really do," Manchin said.

To his credit, Zeballos-Roig notes that ACA subsidies are already means tested either with or without the expanded subsidies; the distinctions are about how generous the sliding scale is and where/whether it gets cut off.

To demonstrate how ACA premium subsidies work under both the original ACA formula and the American Rescue Plan's enhancements, here once again is my world famous (?) Subsidy Cliff graph.

I'm deliberately using one of the most extreme examples to illustrate the point: A single 64-year old adult, just one year out from moving on to Medicare (the actual most extreme example would be a 64-year old couple with 25-year old triplets still included on their family policy, but that seems like too much of an outlier). The single 64-yr old is just fine for this exercise.

The horizontal axis shows this enrollee's annual income, up to around 1500% of the Federal Poverty Line (FPL), which is roughly $204,000/year.

The vertical axis shows what percent of their annual income this enrollee has to pay for the benchmark Silver ACA healthcare policy at different income levels, under both the original ACA subsidy formula (in orange) and the American Rescue Plan (in blue).

As you can see, in most states, if they earn less than 138% FPL (around $18,700/yr), they qualify for Medicaid instead, making this issue moot for them.

If they live in 11 of the 12 states which haven't expanded Medicaid yet (Wisconsin is a special case), they're kind of screwed if they earn less than 100% FPL...but if they earn between 100 - 138% FPL, they qualify for either a $0 premium plan (under the ARP) or they have to pay between 2-3% of their income (under the original ACA formula).

Under both formulas, the sliding scale increases as their income increases...up to a point:

HOWEVER, once you go over 400% FPL, under the original formula, you hit the dreaded Subsidy Cliff: Premium subsidies are cut off completely, meaning you have to pay full price. In this case, full price for a benchmark Silver plan for a 64-yr old is nearly $1,100/month...or over 24% of the enrollee's annual income!

The American Rescue Plan not only tops out at 8.5% of income for net premiums...it eliminates that 400% FPL cut-off as well, so that no one has to pay more than 8.5% of their income regardless of how high that income is: 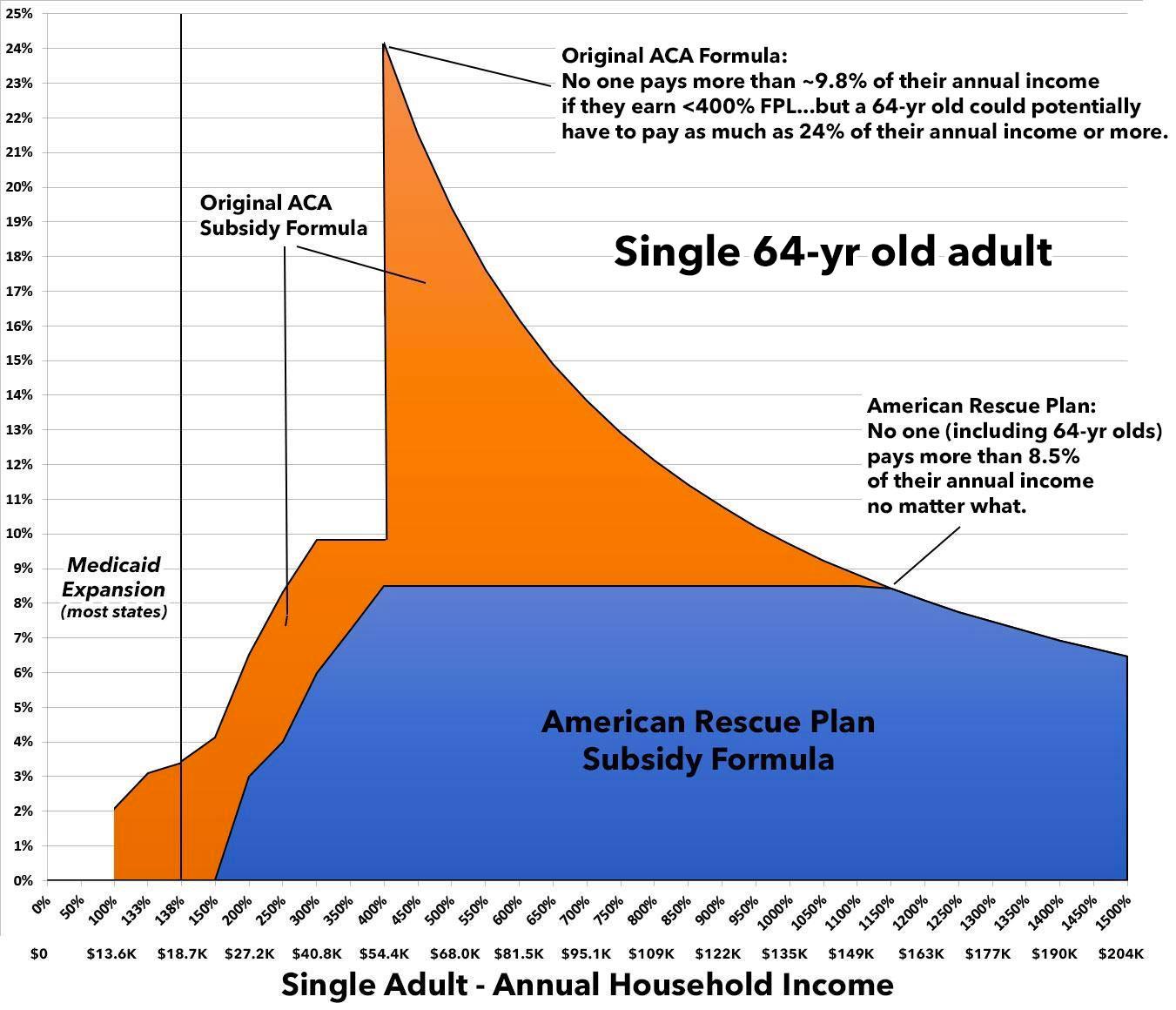 The big question in these latest negotiations is a) what should the maximum percent-of-income that enrollees have to pay be, and b) at what income threshold should the subsidies be cut off?

I listed several possibilities in my earlier post, but just for the hell of it, let's assume Sen. Manchin agreed to the following compromise: 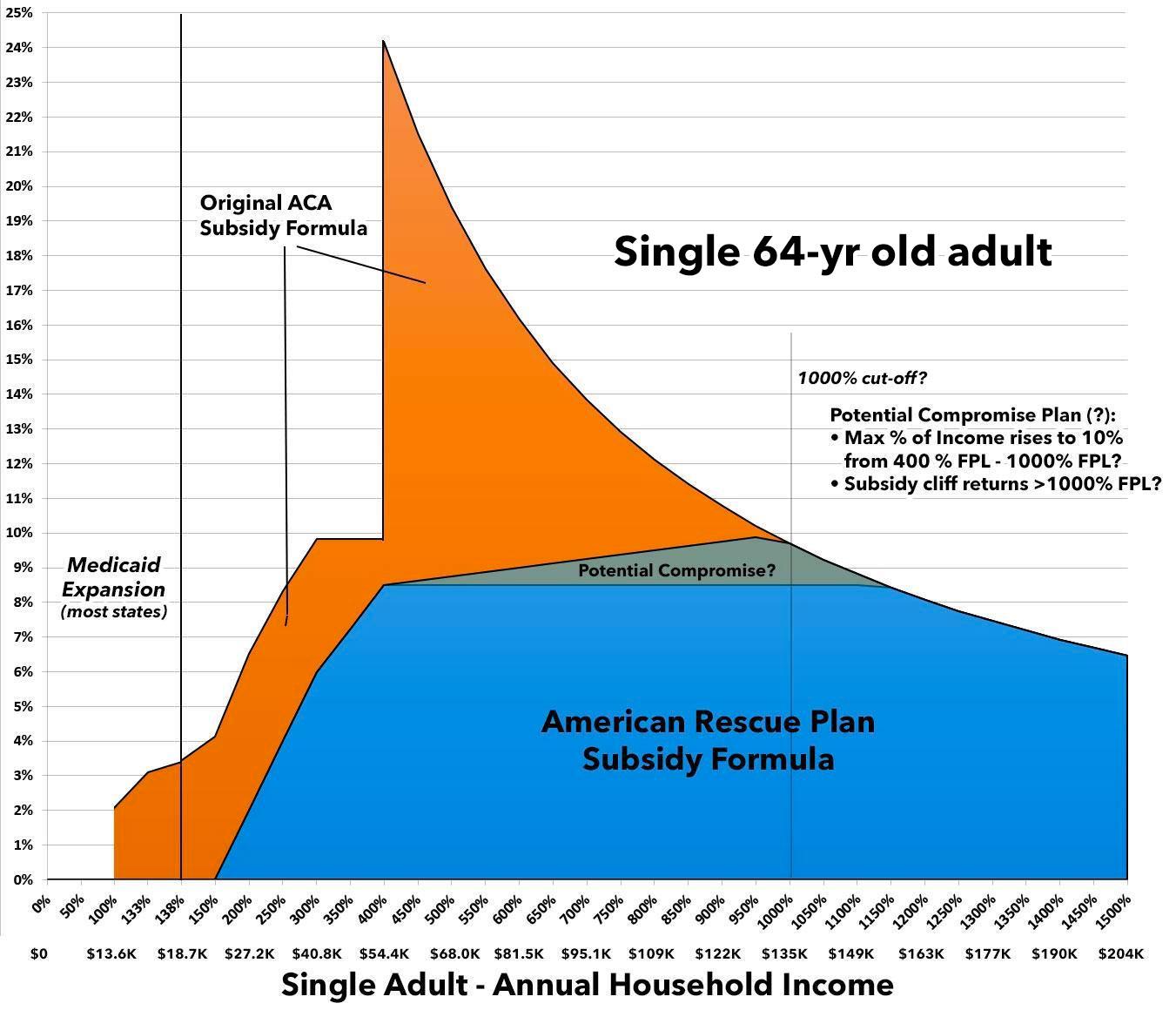 Note that for this particular individual, the subsidies would taper off at around 1000% FPL (~$136K) under both the ARP and the theoretical compromise scenario anyway (it'd actually be more like 1150% FPL under the ARP...~$156K). There are cases where even a 1000% FPL cut-off would still mean a significant price hike, to be sure (for reference, that's $278K for a family of four).

The main point of Sen. Manchin's means testing is to prevent a scenario in which a household earning, say, $500,000/year still manages to receive ACA premium subsidies. I actually managed to come up with just such a scenario last year: A 64-yr old couple earning $533,000/yr living in Kay County, Oklahoma. Before you get all outraged, however, note that this couple would receive a whopping ...$0.46/month, or just $5.52/year. I also have to imagine that most folks earning that much per year have healthcare coverage via their employer anyway.

It's important to note that I'm not endorsing this specific proposal; I'm just noting it as one of several possibilities. I have no idea what they'll end up coming up with, if anything at all.

In an ideal world, Manchin (and Sen. Sinema, and the other 48 Senators in the Democratic Caucus) would agree to just make the ARP subsidy table permanent...but a compromise along the lines I suggest above, or something close to it, would still be a hell of a lot better than returning to the dreaded 400% FPL Subidy Cliff days, which is where we're currently headed.

Here’s the thing: We spoke to a number of people in House and Senate leadership and in the White House and none of them seemed to have any idea where Manchin stood on this issue.

So we spoke to Manchin about Obamacare premium subsidies last night. Manchin was pretty non-committal. In fact, he was borderline negative.

...We then asked Manchin directly if he would support extension of the tax credits.

Wait a second, what? ACA premiums are going to soar as much as 50% in January if the expanded tax credits expire and no one has presented Manchin with a proposal to remedy that? On a bill that would only require a simple majority vote?

So we continued. Would Manchin support ACA subsidies in reconciliation if Democratic leadership and the White House proposed it?

...“You don’t have a lot of options to do a lot of other things. So you have to be realistic about what you got. … And I supported [ACA subsidies] in the regular bill. But the bottom line is there’s only so many dollars to go around. And the rest of it – you saw the big package and the wish list they have on climate. I don’t know what they’re going to do.”

We’ll leave it to you. Does this sound like someone who is going to support extending ACA subsidies in the reconciliation package?

And, by the way: Manchin said a reconciliation deal between him and Senate Majority Leader Chuck Schumer isn’t particularly close.

A Schumer spokesperson said the New York Democrat “strongly supports extending the ACA subsidies but Sen. Manchin asked that this topic not be discussed before other core issues are settled.” Of course, there are plenty of House Democrats who would say that this is a core issue.

“I’m pretty confident this provision- there may be some modifications on eligibility at what income levels- but this provision, which makes care affordable, which is what our intent was, will be included," he said.

Steney Hoyer is the House Majority Leader (2nd banana to Speaker Pelosi, I believe). Alex Ruoff is a healthcare reporter for Bloomberg Government.