This Just In from the Centers for Medicare & Medicaid Services:

The Centers for Medicare & Medicaid Services (CMS) reports that 13.8 million Americans have signed up for or were automatically re-enrolled in 2022 individual market health insurance coverage through the Marketplaces since the start of the 2022 Marketplace Open Enrollment Period (OEP) on November 1. This includes 9.7 million plan selections in the 33 states using the HealthCare.gov for the 2022 plan year, through December 15, 2021, the deadline for January 1 coverage.

Also, 4.1 million plan selections in the 17 states and the District of Columbia with State-based Marketplaces (SBMs) that are using their own eligibility and enrollment platforms, through December 25, 2021, which is past the deadline for January 1 coverage in half of the SBMs. Total nationwide plan selections include 2.0 million consumers (15% of total) who are new to the Marketplaces for 2022, and 11.8 million returning consumers (85% of total) who have active 2021 coverage and made a plan selection for 2022 coverage or were automatically re-enrolled. 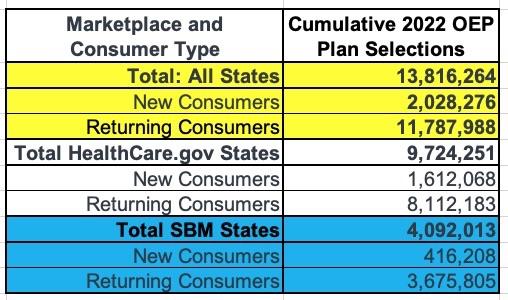 In addition to reported plan selections, New York and Minnesota have a Basic Health Program (BHP), which provides coverage to consumers with incomes below 200 percent of the FPL, who are not eligible for Medicaid or CHIP and otherwise would be eligible for a QHP. From November 1 – December 25, 2021, New York had a total of 948,917 individuals enroll in a BHP. Minnesota’s data was unavailable at the time of this report.

However, according to the Minnesota Dept. of Human Services, as of December 2021, MinnesotaCare had 104,960 enrollees; while they haven't published the January report yet, it's almost certain to be around that much if not a few thousand higher. Combined, that's 1,053,877 BHP enrollees, bringing the grand total of Qualified Health Plans (QHPs) & BHPs up to around 14.88 million.

Update: MN DHS just posted their MinnesotaCare enrollment report page, and sure enough, it's up slightly more to 106,245 for January.

As an aside, CMS is long overdue to stop dismissing BHP enrollees as a mere footnote. This may have made sense the first few years of the ACA exchanges, as Minnesota's program has never had more than around ~100K enrollees and New York's didn't kick off until a couple of years later, and took another year or two to ramp up enrollment...but at this point over a million people are enrolled in BHP plans who otherwise would be eligible for QHPs instead. They should be included as part of the topline number.

Here's the state-by-state QHP breakout. Remember, the 33 states hosted on the federal exchange (HealthCare.Gov) run through December 15th; the other 17 states +DC run through December 25th. The final Open Enrollment Period deadline for all states except Idaho is January 15th or later (there's several states which have final deadlines of January 31st):

Again, when you add the Basic Health Plan enrollees in New York and Minnesota, the grand total comes to around a million higher.

IN ADDITION, several of the state-based exchanges have issued their own Open Enrollment Period (OEP) reports since December 25th which raise the cumulative total slightly higher yet:

Here's the state-by-state breakout compared to the final OEP totals from OEP 2021, including the small updates noted above: 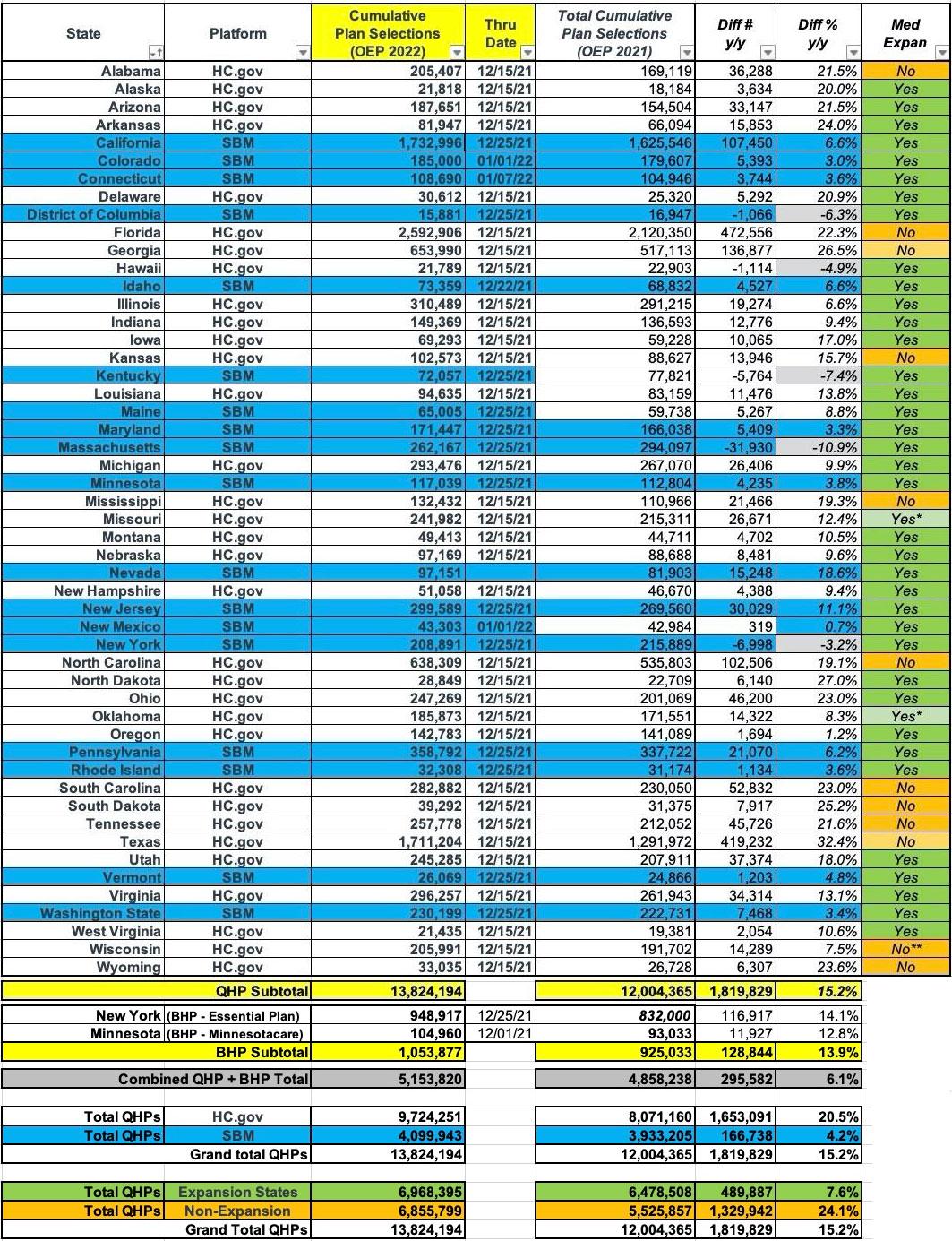 The dramatic federal exchange enrollment increase is primarily driven by the fact that all 12 of the states which haven't expanded Medicaid under the ACA are hosted by HealthCare.Gov:

It's also worth comparing 2022 OEP to date vs. 2021 OEP in terms of new vs. renewing enrollees. Unfortunately there's no state-by-state-breakout of this data for 2022 OEP yet, but overall:

...however, it's important to remember that all states (except Idaho) still have until at least January 15th to tack on more enrollees, and a few still have as late as January 31st to do so. It's also important to keep in mind that a large chunk of those "renewals" come from the ~2.8 million people who enrolled mid-2021 during the COVID Special Enrollment Period, so they're only "semi-new" to the exchanges. 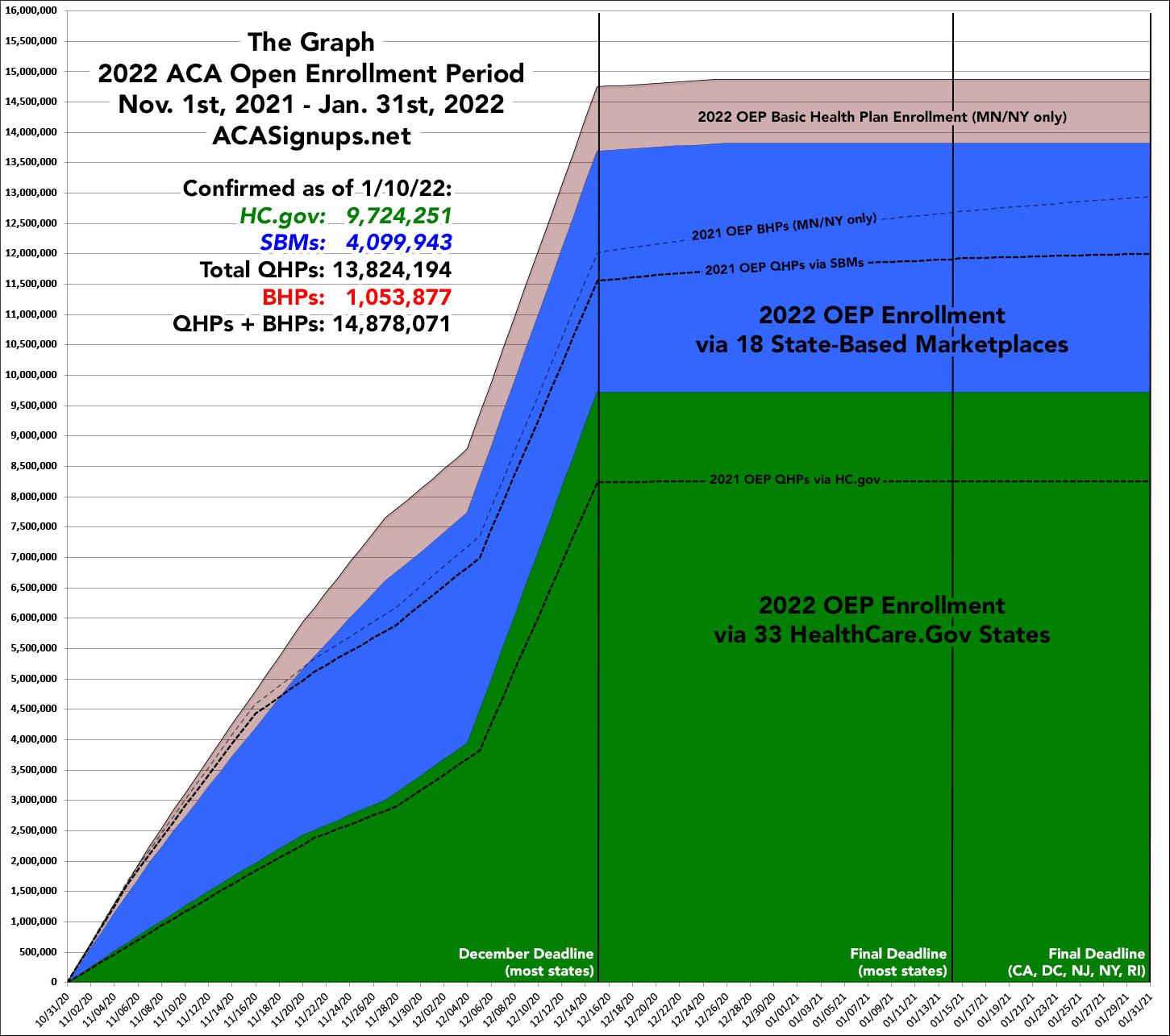 The big question now is how many more new enrollees will be added by January 15th (final deadline in 44 states), January 23rd (Massachusetts) or January 31st (CA, DC, NJ, NY & RI)? (Idaho is the only state which had their final deadline for 2022 Open Enrollment back in December).

My guess is it'll be somewhere between 500K - 800K, which would bring the grand total up to somewhere between 14.3 - 14.6 million QHPs, plus another ~1.1 million BHPs in MN/NY, for a grand total of ~15.4 - 15.7 million combined. It's even conceivable that QHPs could break 15 million, but that would require a truly jaw-dropping last-minute surge.