Surprise! "Whoever knew healthcare could be so complicated?" 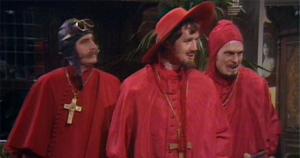 Last December, after years of failed attempts and controversy, Congress finally passed a bill which, once implemented, is supposed to mostly eliminate one of the uglier problems with our healthcare system: Surprise Bills:

...Language included in the $900 billion spending deal reached Sunday night and headed for final passage on Monday will make those bills illegal. Instead of charging patients, health providers will now have to work with insurers to settle on a fair price. The new changes will take effect in 2022, and will apply to doctors, hospitals and air ambulances, though not ground ambulances.

Well, yes...except that there's still a few details to be worked out. Via the great Amy Lotven of Inside Health Policy:

As the administration moves to implement the surprise billing law, a battle is brewing over how HHS should interpret what factors arbitrators must consider when resolving payment disputes. The fight has already begun: Sens. Bill Cassidy (R-LA) and Maggie Hassan (D-NH) -- and Reps. Larry Bucshon (R-IN) and Raul Ruiz (D-CA) -- told the Biden administration last week that Congress intended all six factors spelled out in the law to be given equal weight, but other sources say that lawmakers wanted the median in-network rate to be considered for most cases, while other factors could be used in certain circumstances.

What's most surprising about the Surprise Bill bill is how unusually bipartisan the issue is (which is presumably also the only reason it was able to pass through both the House and Senate in the first place).

...The final bill gives providers and insurers 30 days to work out payment rates, and, if they are unable to agree, they can turn to a new independent dispute resolution process that HHS must set up by Jan. 1, 2022.

...Congress added several other factors for consideration, including: providers’ level of training, quality and patient outcomes, market share for providers and payers, patient acuity, teaching status and prior contracted rates. The law also was tweaked to explicitly say that arbitrators cannot consider the provider’s billed charge, the usual or customary charge, or rates paid by Medicare, Medicaid or other government programs.

While it’s clear that Medicare charges cannot be considered, stakeholders hold different views on whether the six factors listed in the text should be considered equally, or whether Congress intended the qualifying payment (QPA) amount to be the primary consideration and the other factors to be used only in certain circumstances.

If both Republicans and Democrats in both the House and Senate agree that all of the factors have to be weighed equally, what's the problem?

James Gelfand, senior vice president of health policy for the ERISA Industry Committee (ERIC) says his lobby’s interpretation of the text is that primacy should be given to the QPAs. In a recent call with reporters, Gelfand argued that many of the other factors -- like provider training and patient acuity -- are already baked in the coding.

OK, but the bill has already been passed and signed into law by Congress, and it's members of both parties and both chambers of Congress saying he's wrong, so...

...He also notes that the Congressional Budget Office assumed that most cases will adhere to the QPA and will not be based on QPA plus multipliers for the other factors. “Congress relied on this CBO score in passing the No Surprises Act,” Gelfand notes.

Jack Hoadley of Georgetown University’s Center on Health Insurance Reforms (CHIR) also believes that since the QPA, or in-network rates is the first factor listed in the statute, it is the most important. The other pieces -- like patient acuity- would be captured by coding, he says. Since there is room for abuse, it is critical that the rulemaking provide guidance to indicate when it is appropriate for the arbitrator to look beyond the QPA. It is also crucial that the arbitrator be knowledgeable enough about coding to able to understand which factors are relevant to a particular case, Hoadley adds.

Loren Adler, associate director of the USC-Brookings Schaeffer Initiative for Health Policy, who closely tracked the legislative debate, says it is “plausible” that different lawmakers had different intentions in the bill. He notes that some of the less consumer-friendly factors added to the bill at the last-minute last December were pulled from Cassidy-Hassan proposals.

“However, I’d gotten the impression that HELP, Energy & Commerce, and Ways & Means intended the qualifying payment amount to be the main factor,” Adler says.

The article goes on for awhile longer, but I think you get the point.