#AmRescuePlan includes a simple tactic to get the remaining Red States to expand Medicaid: Bribe 'em (and that's fine)

I'm a couple of weeks behind on this (the full #AmRescuePlan, #HR1319, already passed the House late last Friday night), but Medicaid expansion is one of the core issues I cover here, so it didn't feel right not to give this a write-up.

Before the Affordable Care Act was passed, only certain populations were eligible for Medicaid. Low-income children, pregnant women, parents of minor children and those with certain disabilities and so forth were eligible up to a certain household income threshold ranging from as a ceiling of as little as 13% of the Federal Poverty Line (parents in Alabama) to as much as 375% FPL (pregnant women and newborn infants in, interestingly, Iowa).

However, prior to the ACA, in nearly every state, there was a substantial portion of the low-income population who wasn't eligible for Medicaid no matter how low their income was: "Able-bodied" adults without minor children. In nearly every state, if you didn't have kids under 18, weren't pregnant and didn't have any obvious disabilities, you were basically SOL even if your income was next to nothing.

There were a few exceptions to this--Minnesota had their MinnesotaCare program (which has since been retooled as a Basic Health Program under the ACA); the District of Columbia had made special arrangements to allow this population to qualify for Medicaid up to 210% FPL; and so forth. However, over 20 million low-income Americans were on their own, unable to afford comprehensive coverage (assuming insurance carriers were willing to cover them at all) and left at the mercy of rip-off "indemnity plans" and the like, or simply going bare and hoping for the best.

The ACA was written to expand Medicaid eligibility to every American earning up to 138% FPL (technically it's 133%, but there's a 5% "income disregard" in the language making it effectively 138% FPL). That means childless adults earning up to around $17,800/yr (if they're single) or $24,000/yr (for a couple) are eligilble...in the 38 states + DC which have agreed to expand the program to date.

The language of the ACA basically required every state to expand Medicaid to this population, with those earning more than 138% FPL (up to 400% FPL) qualifying for subsidized private ACA exchange policies instead. Unfortunately, in 2012, the Supreme Court ruled in NFIB v. Sebelius that the feds couldn't force states to sign up for Medicaid expansion; it had to be done so voluntarily, either by the governor, the state legislatures or via a ballot proposal, depending on each state's government. Around half the states did so right away, with around half of the remaining states still refusing to do so over eight years later.

It's important to understand that ACA Medicaid expansion is the bargain of a lifetime for individual states. The federal government would cover fully 100% of the cost of doing so for the first three years (through the end of 2016), then gradually drop to a still-generous 90% over the next few years; this means hundreds of millions (or even billions) of dollars in federal funding flooding into the local economies, generating more in savings on their healthcare systems plus increased tax revenue than that 10% share is. And yet, here we are: As of March 2021, twelve states still haven't expanded the program (two others, Oklahoma and Missouri, passed expansion via ballot initiatives last year and are still ramping their programs up).

The ACA's language didn't account for the possibility that some states might not expand Medicaid, which is why the lower-end range of exchange plan subsidy eligibility starts off at 100% FPL (This was actually due to a bit of a drafting error between the House and Senate versions of the law, I believe. One assumed Medicaid would exted up to 100%, the other up to 138%. As a result there's an overlap from 100 - 138% FPL which, as it happens, is actually kind of a good thing under the circumstances, because it means those earning 100 - 138% FPL in non-expansion states still qualify for heavily-subsidized exchange plans, which is hardly ideal but is better than nothing).

I should note that Wisconsin is a special case: They refused to expand Medicaid to 138% FPL under the ACA...but did agree to expand "traditional" Medicaid up to 100% FPL, anyway. This means they technically have no Medicaid gap, although it'd be a lot better for those in the 100 - 138% range if they just moved to full expansion...and they'd save a lot of money in the process, since the state has to pay 34% of "traditional" Medicaid costs vs. just 10% of ACA expansion costs. Even covering an additional 30,000 Wisconsinites would still cost far less than what they're paying now for a smaller population.

In any event, while the Medicaid Gap is less than half the size it once was as more states have gradually, sometimes grudgingly, gone ahead and come online, it's still a major problem for 2.2 million people across the 12 remaining states, and there's only a few left which can push it through via statewide ballot initiatives. With Democrats finally having retaken (barely) both the House and Senate, along with the White House, they're finally in a position to do so

One possible "solution" would have been to simply remove the lower-bound income cut-off point for ACA exchange subsidy eligibility (that is, to lower the threshold from 100% FPL to 0%). For a week or so in January I actually thought they had decided to do just that. However, this would create two new problems: First, Medicaid is far more comprehensive than nearly all ACA plans, and usually costs the enrollees nearly nothing, so it would be an inferior form of coverage for most of the Medicaid Gap population. Secondly, if the lower-end subsidy cut-off were removed, it's almost certain that quite a few states which have already expanded the program would reverse themselves and allow Medicaid expansion to expire, in order to save the 10% portion of the cost that they have to pay.

In other words, instead of adding 2.2 million people to Medicaid, this move would effectively backfire and cause as many as 19 million current Medicaid enrollees to lose that coverage (to be replaced with for-them-inferior ACA exchange policies instead).

With that in mind, Congressional Democrats have come up with a simple alternate plan: Bribe the remaining states. From the House Energy & Commerce Committee's summary of their portion of the American Rescue Plan:

Providing a new incentive for states to expand Medicaid by temporarily increasing the federal medical assistance percentage by five percentage points. If all 12 remaining states expanded Medicaid, more than two million people currently in the coverage gap would gain access to Medicaid.

Under the proposal, states that do not have expansion in place when the bill is enacted would be eligible for a 5 percentage point increase in the state’s regular, or traditional, match rate (FMAP) for two years if they implement the expansion. The traditional FMAP applies to most services for non-expansion groups, including children, non-expansion adults, seniors, and people with disabilities. Even in states that have already adopted the expansion, the traditional Medicaid program is much larger – representing 79% of Medicaid spending overall in these states – and per enrollee costs are relatively higher than the expansion group. So, under this new incentive, states could draw down additional funds for a large share of their Medicaid population and spending if they newly expand. In addition to the 12 states that have not adopted the expansion, the increase in the match rate could also apply to Missouri and Oklahoma if the bill is enacted before they implement the expansion (these states are expected to implement in July 2021).

Let's use South Carolina as an example. SC had around 1.1 million residents enrolled in Medicaid last September, and pays 29% of the cost for those folks. The thing is, non-disabled adults under 65 on Medicaid cost 28% less in South Carolina than the Medicaid population as a whole (this is based on 2014 costs, though I'd imagine the ratio between the groups is around the same today).

According to Kaiser, in 2019 total Medicaid spending cost around $6.5 billion, with the state paying around $1.87 billion of that and the feds picking up the rest. That's around $5,920 per enrollee. Assuming non-disabled adults cost a similar 28% less on average, that's roughly $4,260 apiece for them.

The 2-year 5-point FMAP proposal would, according to Kaiser, mean an additional $790 million in federal funds for the state...but the state would only have to pay $190 million, leaving the state with a net "profit" of $600 million for doing what they should have done seven years ago.

I know I use the term "bribe" but that's not meant as a slam on the #AmRescuePlan. The goal is to provide decent healthcare coverage to as many people as possible, and Republican governors and state legislators have been unbelievable dicks about doing so, keeping millions of their own residents suffering for seven years for no legitimate reason. While great progress has been made since then, mostly via ballot initiatives, it could take several more years for Mississippi, South Dakota and especially Florida to come around, and some people simply can't wait that long.

So, if pouring a few billion dollars more into the maw of Red States* is what it takes to get them to finally get over their hatred of President Obama, so be it.

*(Yes, I know Presiden Biden just won Georgia & Wisconsin, and several of the states have Democratic Governors, but all 12 of their legislatures are still fully controlled by the GOP).

If I'm reading this correctly, this means that the 2-year 5-point "bonus" match offer would not be a limited-time offer; any of the twelve non-expansion states could take the feds up on it at any time in the future.

What Is the Estimated Effect on State Spending?

We estimate that the increase in the traditional match rate would more than offset the increased state costs of the expansion in every state. Nationally, the increase in federal support from the 5 percentage point increase in the traditional match rate to the 12 non-expansion states could total $16.4 billion over two years if all states implemented the expansion starting in FY 2022. These new federal funds to states would be offset by new state costs tied to the 10% share of expansion. We estimate that new state costs for expansion could be $6.8 billion over two years across current non-expansion states, assuming all eligible people enroll. The result would be an estimated fiscal benefit to states of $9.6 billion over the two year period (Figure 1).1 Put another way, new federal funds under the 5 percentage point bump are more than two times larger than new state expansion costs; this ratio varies slightly across states, from more than one a half times larger in Texas to over four times larger in South Carolina (Table 1).

Kaiser wraps things up with a table showing how much they figure each state would gain vs. how much they'd have to pay just for doing something all of them should've done in the first place: 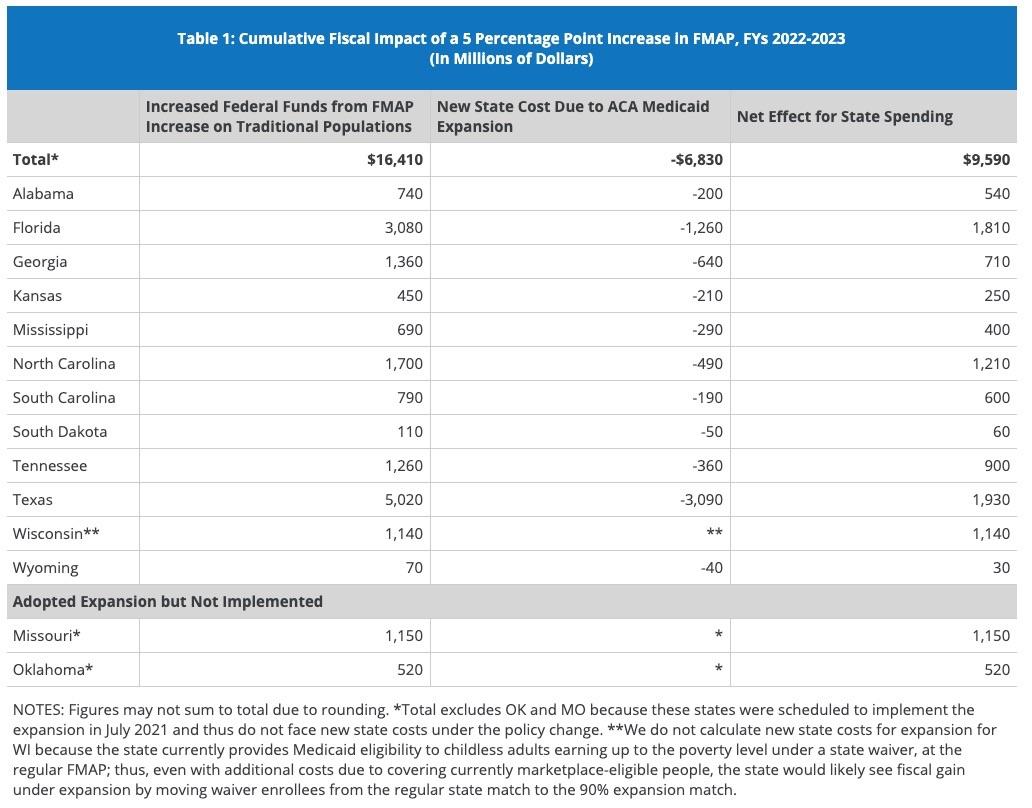