What percent of #ACA exchange enrollees are subsidized in the #ARP era? It's complicated.

Several fellow health wonks have chimed in. I spitballed perhaps 95%. Fann puts it at 96-97%. Cynthia Cox of the Kaiser Family Foundation thinks it could be even higher:

I agree -- maybe even higher, especially once reconciliation comes around. We estimate 92% of all individual market enrollees (including off-HIX) are now eligible for subsidies, so on-HIX, I suspect nearly all will be getting subsidies.

I decided to take a look at the data we have available so far. Unfortunately, there's no demographic data available about the 1 million+ who've enrolled during the ongoing COVID SEP so far (which I estimate is actually over 1.5 million nationally) other than by state, but we have a lot of data about the 12.0 million who enrolled during the 2021 Open Enrollment Period (OEP) thanks to the CMS Public Use File.

One way of looking at this is that the vast majority of those enrolling via the COVID SEP are almost certainly going to be subsidy-eligible. However, even assuming 99% of 2 million additional enrollees are subsidized, that would still only bring the current percentage up to 86.7%.

There are two groups of exchange enrollees who will boost the percent of the total who receive APTC subsidies: Those earning more than 400% FPL (who weren't eligible for subsidies regardless of what portion of their income the premiums cost) and those earning less than 400% FPL who still weren't subsidy-eligible because the benchmark Silver plan cost less than a given portion fo their household income.

Fann and Cox noted that the second group is mostly comprised of younger enrollees due to the ACA's 3:1 age band...that is, the unsubsidized premium price for 21-year olds is 1/3 as much as for a 64-year old, which means their premiums are a lot more likely to fall beneath the maximum % of income threshold. Fann suggested looking at the states with the lowest average premiums.

I've filled in the average premiums for two missing states (Idaho & Nevada) based on my own estimates from last fall. The 17 states which have the lowest 1/3 of average premiums are below, along with total OEP enrollment and the number of enrollees age 0 - 34 in each state: 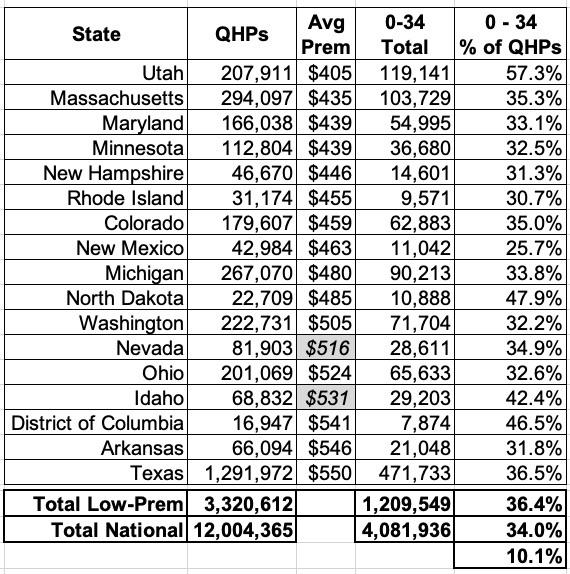 The total number of younger enrollees in these states is just over 1.2 million, or 10.1% of total enrollment.

What about looking at it from income bracket? I have to imagine that nearly everyone earning more than 400% FPL who chose an on-exchange policy before ARP expansion did so because they only earn slightly more...that is, they have a highly variable income which may be ~420 - 450% FPL or so, but which sometimes slips back below the 400% FPL threshold, so they enroll on-exchange just in case.

Before the ARP, there wasn't really much reason to go through the extra steps of enrolling on-exchange if your income was so high that you were absolutely certain you wouldn't qualify; you could just go off-exchange instead. With that in mind, I'm assuming just about all of the over-400% on-exchange enrollees are now subsidy-eligible...and certainly those who are currently off-exchange are only going to go through the hassle of switching to an on-exchange plan if they'll receive the expanded subsidies, so it's safe to assume just about all of that crowd will be subsidized as well..

I'm going to revise my estimate downward to between 90 - 95% post-ARP.

Unfortunately, the PUF doesn't cross-index between age bracket and income bracket, so I can't match up the age brackets with the income brackets. In addition, we have no idea what the demographics are of the additional COVID SEP enrollees yet, either age- or income-wise.