#COVID19 Special Enrollment Period likely to be announced Thursday. How many more might enroll? (updated)

In an news which surprises absolutely no one, this Thursday the Biden Administration is expected to officially announce a COVID-19 Special Enrollment Period at HealthCare.Gov, the federal ACA exchange which hosts enrollment for 36 states:

...The president is also slated to sign an executive order aimed at strengthening Medicaid and initiating an open enrollment period under the Affordable Care Act.

Trump frequently bragged about gutting the Affordable Care Act by rescinding the individual mandate, though Republicans were unable to fully repeal the law as promised.

Last April & May, when millions of people were losing their jobs and incomes during the initial COVID-19 wave, I spent a lot of time keeping track of how many people were enrolling in ACA exchange plans utilizing Special Enrollment Periods (SEPs).

Most of the state-based exchanges offered a "no reason needed" SEP specifically due to the ongoing pandemic, but HealthCare.Gov (which hosted 38 states at the time) refused to do so despite tremendous pressure from a wide array of organizations and politicians. The sole state-based exchange not to offer a COVID-specific SEP was Your Health Idaho.

Instead, both HealthCare.Gov and YourHealthIdaho eased up on enforcement of the "60-day, documentation needed" rules for standard SEPs...Idaho officially waived the documentation requirement for those who lost employer coverage, while HC.gov unofficially did the same for awhile...and then switched to still requiring documentation, but effectively waiving the 60-day requirement (that is, if you lost your employer coverage as early as January you were given a pass).

I went through some trouble to analyze how effective the official COVID SEPs were in getting more people to #GetCovered through June. This was tricky and imperfect for several reasons:

Even with all of that, I was able to cobble together what seems like a reasonably accurate overview of how many additional people enrolled in ACA exchange plans specifically thanks to the COVID SEP. I came up with roughly 260,000 additional Qualified Health Plan (QHP) selections, which I extrapolated into somewhere around 900,000 nationally if every state offered and promoted a full 60-day "no reason needed" SEP: 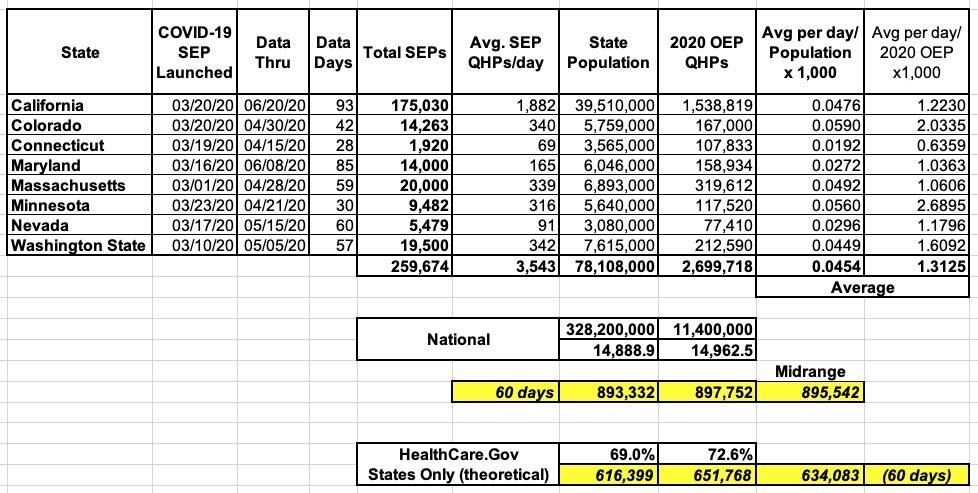 If accurate, this would have translated into roughly 630,000 additional QHP selections via HC.gov specifically during that time period with a full "no reason" SEP.

Instead, with their "less-stringent normal SEP" rule, HC.gov saw around 188,000 additional QHP selections as of late June than they normally would have pre-COVID, which they touted as proving that there was "no need" for an official COVID SEP.

To me, this actually means that had they offered and fully promoted/advertised a full, 60-day, no-reason-needed SEP last spring/summer, they would likely have tacked on perhaps 440,000 additional enrollees on top of that 188K.

So, does this mean that HC.gov is guaranteed to enroll 440K more people if the Biden Administration does indeed re-open enrollment via HC.gov this week? Well, not necessarily. First of all, Pennsylvania and New Jersey split off of the federal exchange this past fall, which means you have to subtract them from any potential federal exchange enrollment. PA & NJ combined composed around 7% of HC.gov enrollees last year, which translates into around 31,000 out of 440,000.

In addition, it depends how long the impending HC.gov COVID SEP ends up being. My calculations above assume a 60-day period, but it could be 30, or 45, or some other time period. Finally, I have no idea how quickly the HC.gov marketing/outreach team can ramp things back up again after it was utterly decimated by the Trump Administration over the past few years.

The closest equivalent I can think of was in spring 2015, when HC.gov (along with some state exchanges) offered a 6-week "Tax Filing Season" SEP for people who claimed that they didn't know about the federal individual mandate penalty (2015 was the first year it was enforced). Around 147,000 more people enrolled utilizing this SEP in HealthCare.Gov states in that instance. Of course that was only for 45 days, the penalty was only $95 that year and there was no pandemic infecting ~200,000 people per day.

There are a few other factors to consider as well, but I'd say around 400,000 seems like a reasonable goal assuming a 60-day period and a full promotion campaign. It'll be interesting to see how much of an impact this has. I need to emphasize, however, that this is not an official target from HHS; this is just my own "back of the envelope math".