South Dakota: In which I prove @GovKristiNoem & @SenJohnThune to be full of crap

Of all the elected officials who have been aping Donald Trump's horrific COVID-19 pandemic denialism, perhaps none have been worse (at least in terms of actual policy impact) than Republican South Dakota Governor Kristi Noem.

Not only has Gov. Noem refused to take any significant action to slow the spread of COVID-19, she's openly mocked those who do and is even starring in TV ads encouraging tourism of South Dakota based on her refusal to impose any reasonable measures using federal COVID-19 relief funding...even as South Dakota has become the second worst COVID hot spot in the nation (first place? SD's neighbor to the north...North Dakota).

In response to widespread criticism, Gov. Noem today penned an Op-Ed for the Wall St. Journal in which she argues that everything is actually peachy-kean in the Mount Rushmore State:

...Many in the media have criticized this approach, labeling me ill-informed, reckless and even a “denier.” Some have asserted that South Dakota is “as bad as it gets anywhere in the world” when it comes to Covid-19—a demonstrably false statement. At the same time, my critics praise states that issued lockdowns, mandated masks and shut down businesses—lauding these states as having taken the “right” steps to mitigate the spread of the virus.

...Despite harsh lockdowns in Illinois, coupled with a mask mandate since May 1, that state experienced a new single-day record in Covid-19 deaths on Dec. 2, and its active case counts are higher, on a per capita basis, than South Dakota’s has ever been.

New Jersey, which still has had the most deaths in the country per capita, has had a mask mandate in place since June and has imposed $15,000-a-day fines on businesses that refuse to close. Still, over the last two weeks of November, its hospitalizations increased by 34%, a six-month high.

California imposed a mask mandate in June and has some of the harshest lockdown orders in the country, including shutting off residents’ water if they have too many visitors. Despite that, the AP recently reported Covid hospitalizations have increased nearly 90% and could triple by Christmas.

Noem then goes on to discuss some of South Dakota's statistics...financial statistics, that is. She touts low unemployment, a budget surplus and so forth...but doesn't say a peep about South Dakota's COVID-19 data, which is what you'd kind of assume would be a reasonable thing to compare against the other three states listed.

Since Gov. Noem doesn't do so in her Op-Ed, I took the liberty of doing so myself.

UPDATE: The same day that Noem's Op-Ed ran, GOP U.S. Senator John Thune, also of South Dakota, similarly sneered at blue states for actually caring more about the health and lives of their residents than about their financial ledger, claiming that "there are a lot of our (the GOP Senate caucus) members who have big reservations about borrowing money to basically bail out a few states who maybe because of their own actions are in a bad fiscal situation."

And while it's certainly possible that the paths for any or all of these states will shift going forward, at the current trajectories, South Dakota is still spiking at a faster rate than any of the other three. They'll likely hit 11% of the entire state being infected by New Year's Eve. 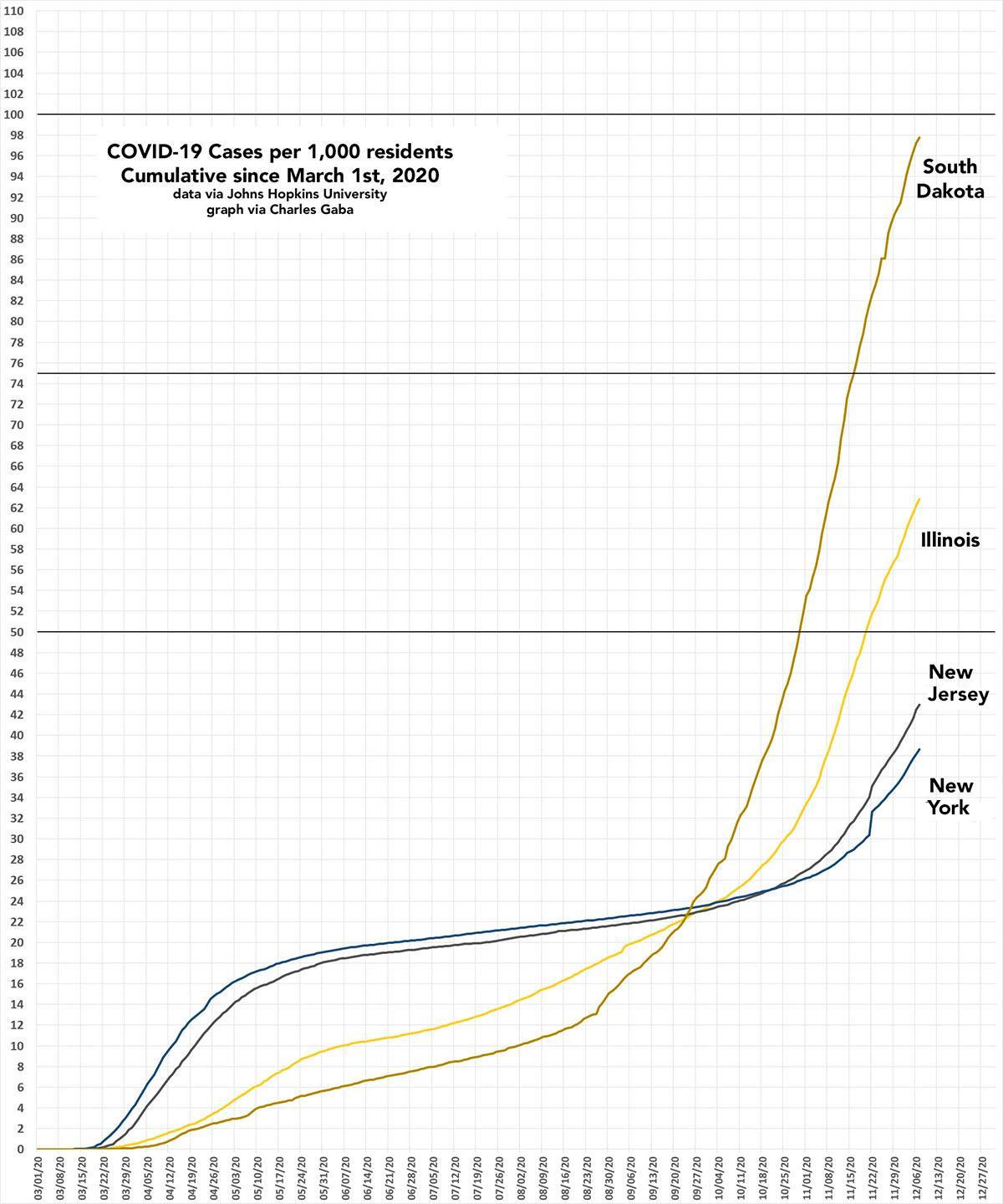 That's a 12% higher COVID-19 mortality rate than Illinois. It's still 31% lower than New York and 37% lower than New Jersey...but when you look at the trend lines for each, it's clear this gap isn't going to last long.

Again: It's possible that NJ, NY & IL will continue to curve upwards while South Dakota may drop off dramatically...but at the current trajectories, I'd expect both NJ & SD to break 20 COVID-19 deaths per 10,000 residents by the end of the year. That's 1 out of every 500 residents dead. 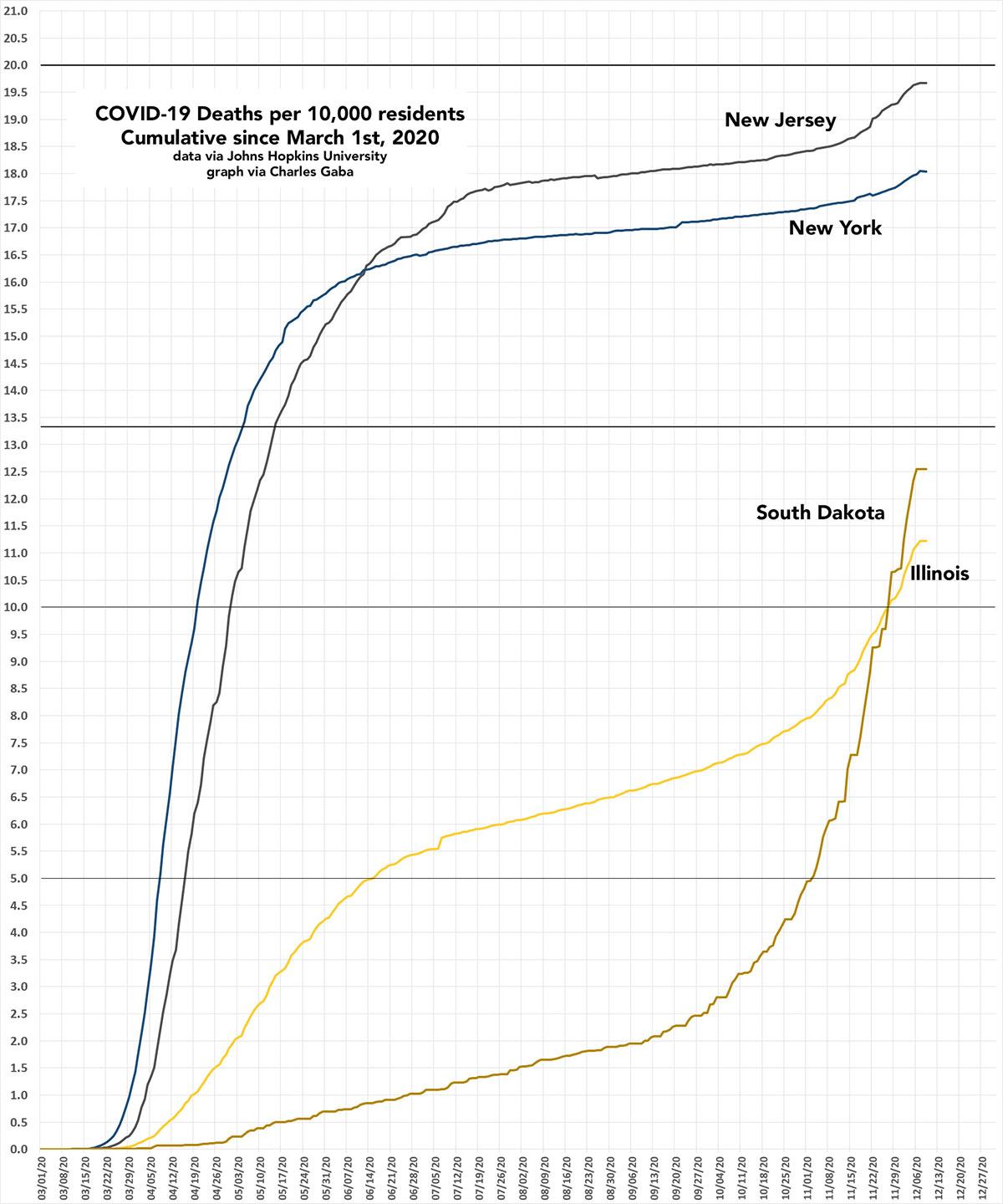 There's another vitally important thing to keep in mind: New York, New Jersey and Illinois have much higher population densities than South Dakota:

That's right: South Dakota now has 2.3x as many cases per capita as New Jersey with 1/109th the population density.

What about hospitalizations for COVID-19?

Unfortunately the cumulative data on this stat is only available for two of the states, but according to the COVID Tracking Project, the number of residents currently hospitalized due to COVID as of 12/07 was:

On top of all of this is the time factor. NY & NJ, in particular, being coastal states with major ports of entry, were hit hard and fast early last spring, before most doctors and public officials knew much of anything about the virus--how ugly it was, how quickly and easily it spread, and what the best countermeasures were to deal with it.

South Dakota, by contrast, had easily 4-5 months to prepare for the virus and take appropriate action...and did nothing. Worse than nothing, actually...they were actively encouraging tourism from other states, and continue to do so even today.

Kristi Noem should be ashamed of herself, but that would require her to have any sense of shame to begin with.