Second: I have to account for the wide variance of household makeups. There's an endless array of possibilities, but I settled on eight specific households:

Collectively, I think these are about as representative as I could reasonably be.

I'm kicking things off here in my home state of Michigan, beginning with MI-01. Michigan's first Congressional District is huge; it includes the entire Upper Peninsula, along with the top third of the Lower Peninsula. The highest-population zip code in the district is located in Traverse City, located in Grand Traverse County. Let's get started! 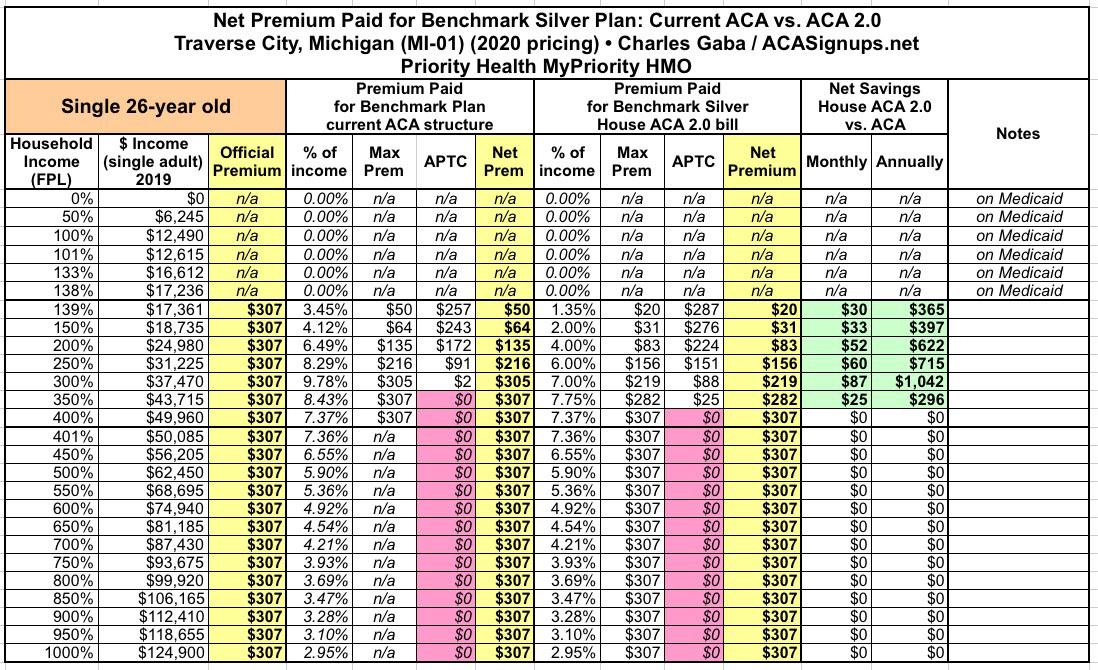 WIthout any subsidies, this young adult would be paying $307/month regardless of his or her income. Under the current ACA subsidy formula, they qualify for Medicaid up to an income of a little over $17,000/year. Over that their monthly premiums start at $50/month, then gradually increase to the full $307/month at around $38,000/year (just over 300% FPL). In this case, that 400% FPL cap is never hit anyway, so removing it has no impact. 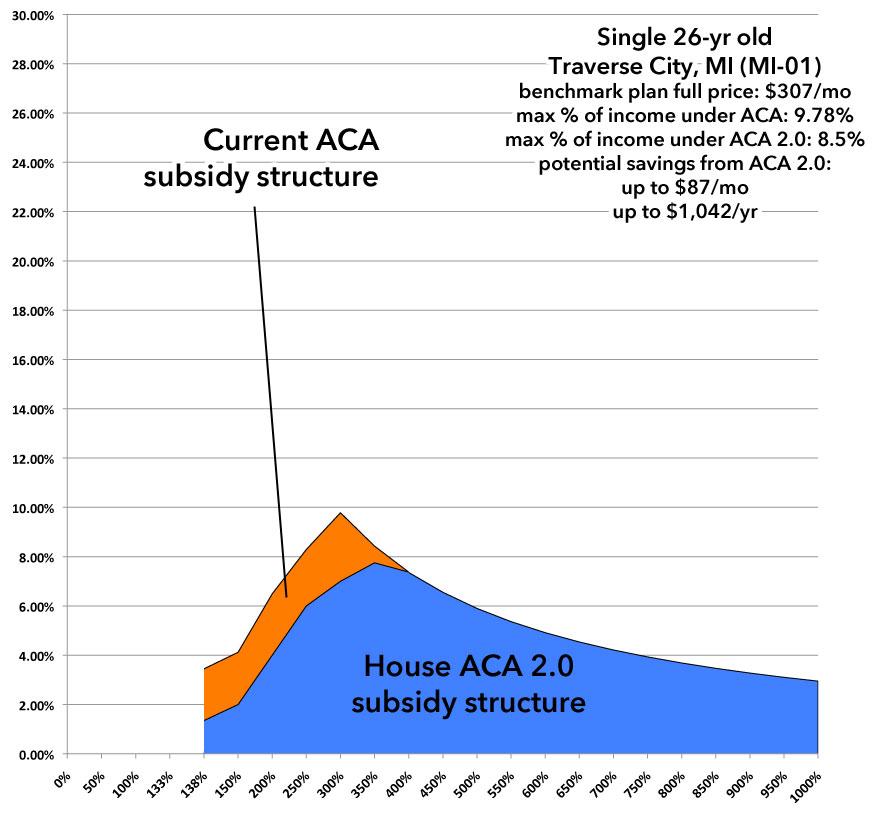 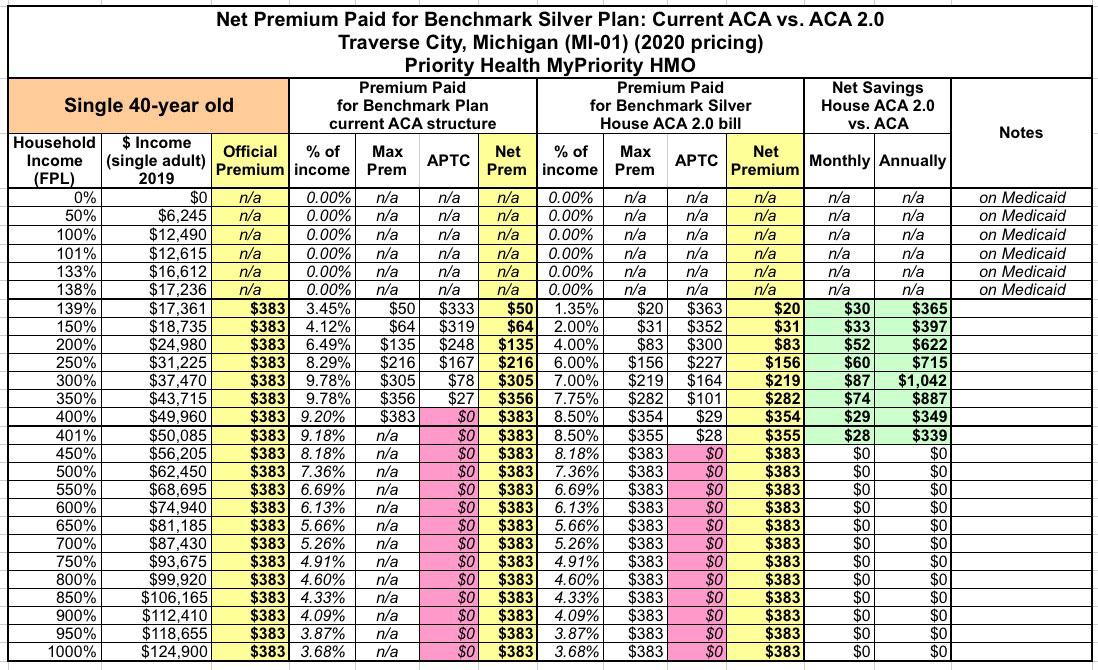 The savings for all of the single-person household would max out at just over $1,000/year regardless of their age...but as you can see, the older the enrollee, the more of a difference it makes as you move up the income scale. At $383/month, the "subsidy cliff" is still never quite reached under the ACA, but thanks to the 8.5% cap (vs. 9.8%), those hovering around 400% and just over it still save a few bucks. 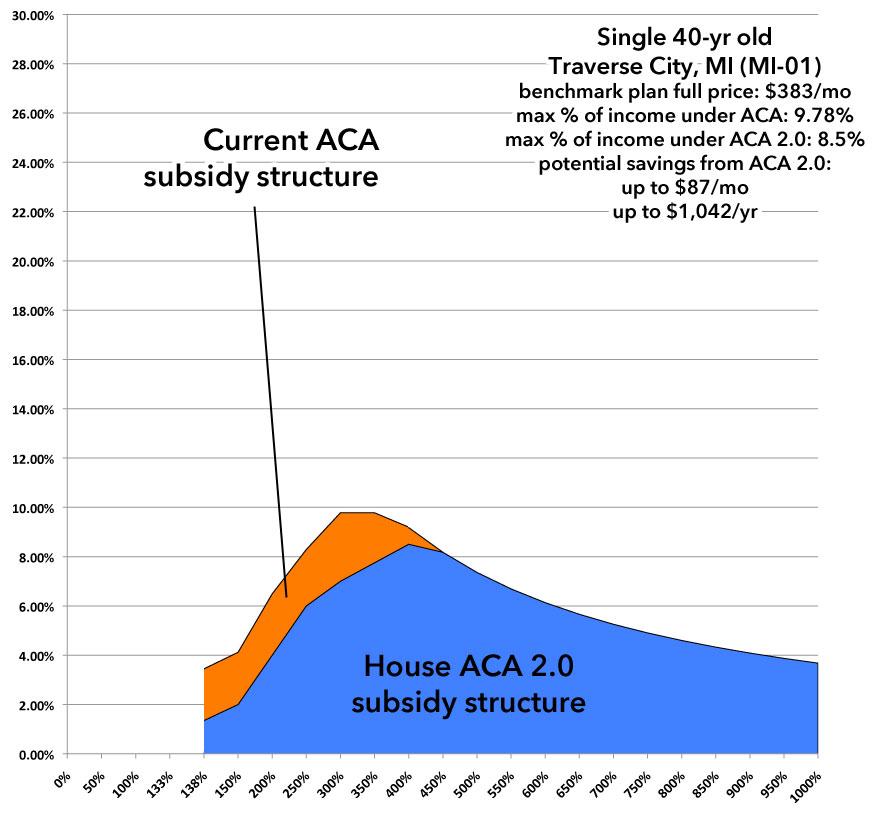 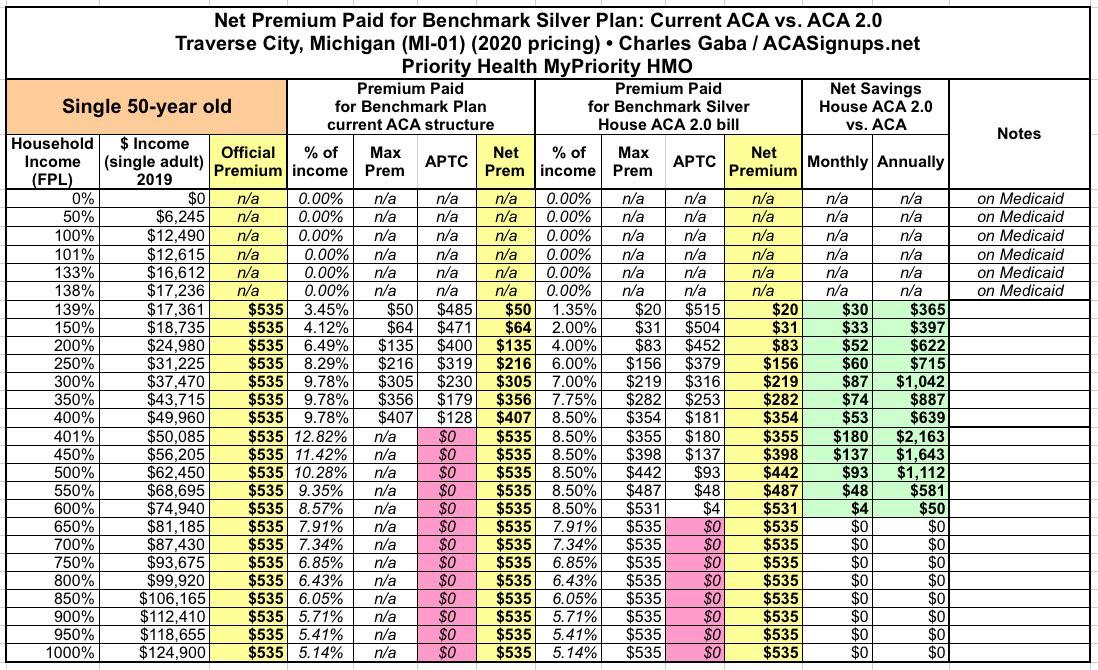 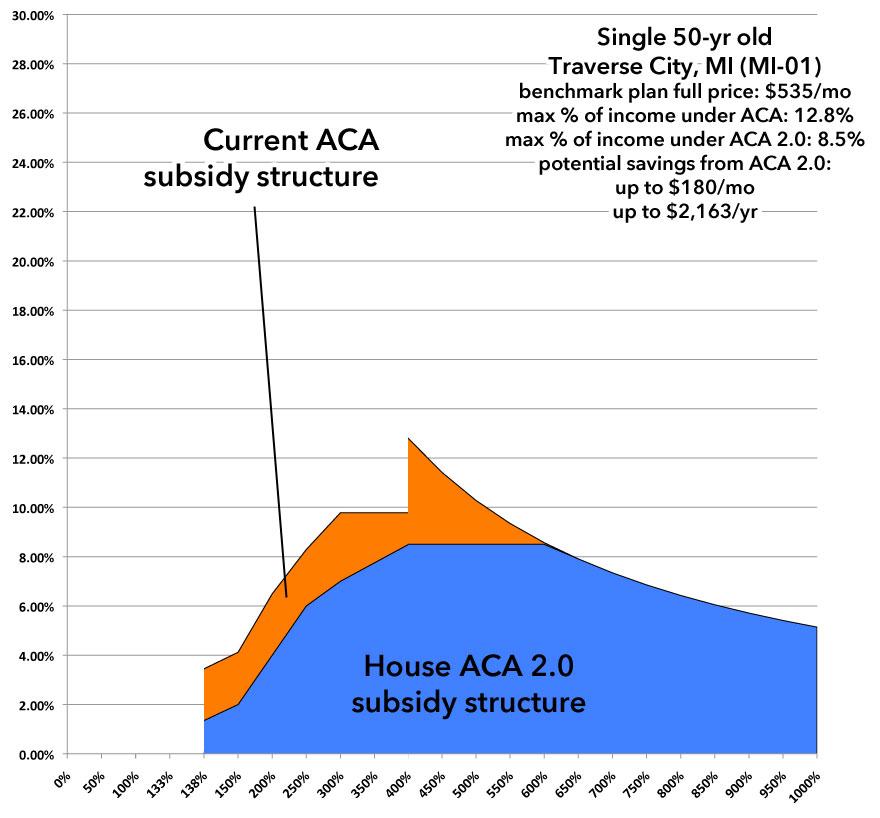 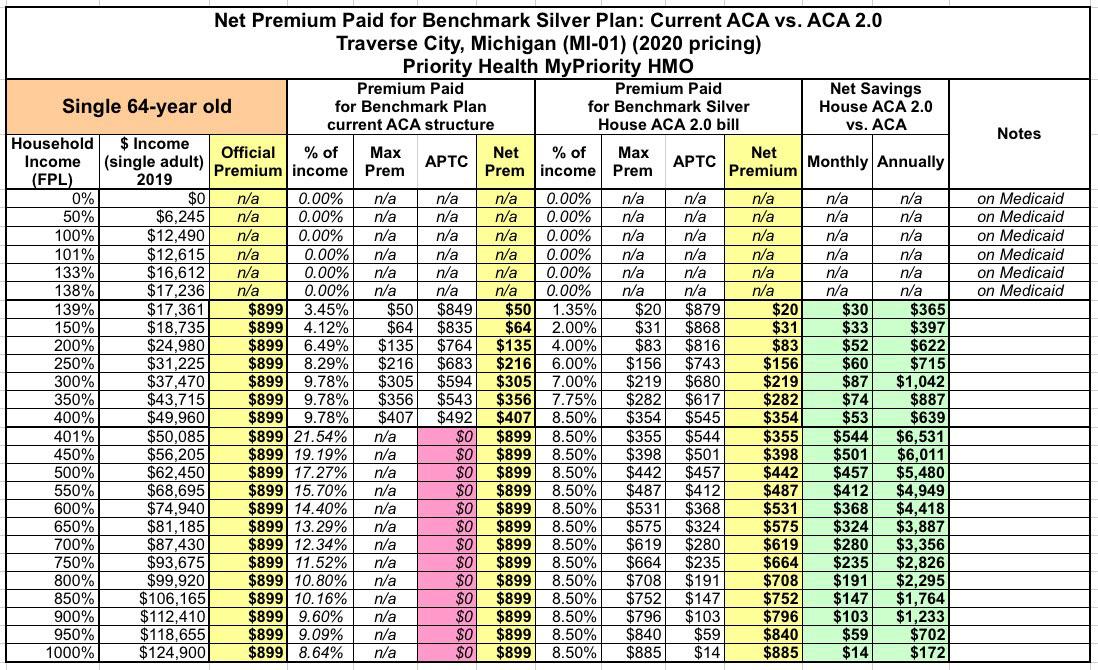 You can really see the Subsidy Cliff problem here. At 64 years old, they'd have to pay nearly $900/month at full price...and with that 400% FPL cut-off, that'd eat up nearly 22% of their income, which is why only a truly desperate (i.e., extremely sick) 64-year old would bother enrolling in ACA policies to begin with unless they earn over around $100,000/year. 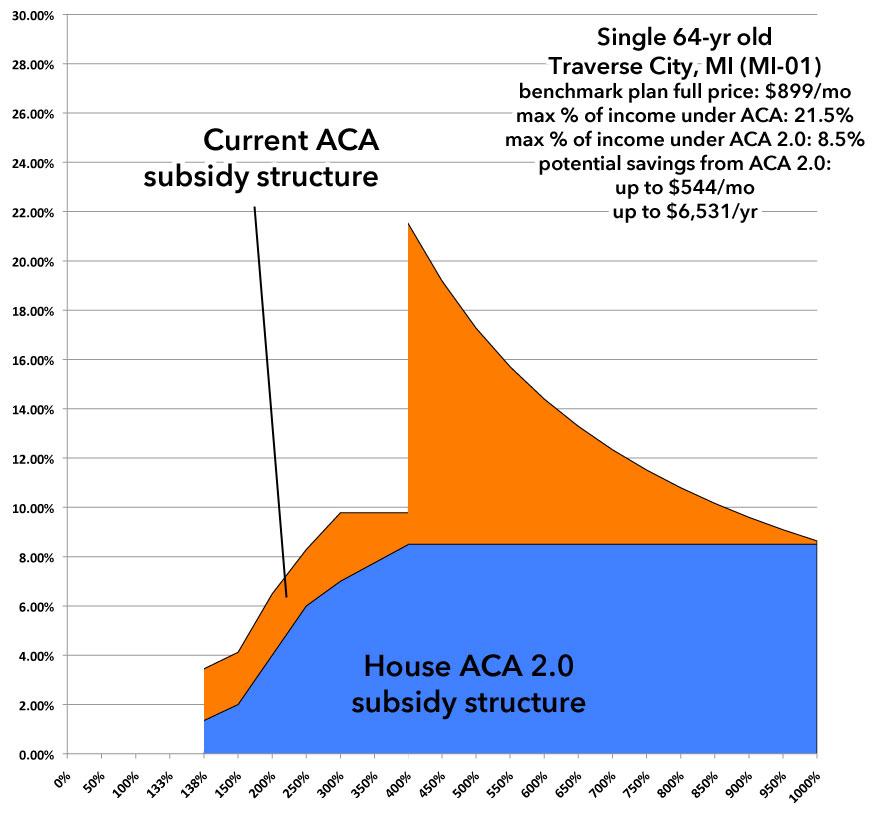 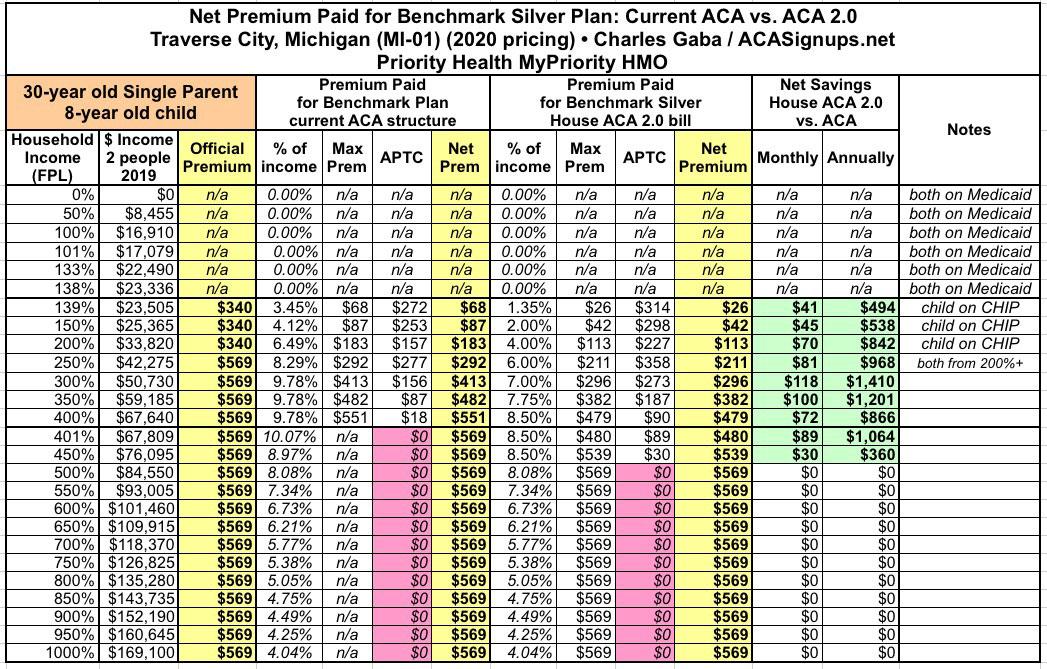 In Michigan, children qualify for Medicaid/CHIP up to 200% FPL, so the official premium for the parent only would only be $340 up through that point...but once their kid is added on, it jumps to $569/month. Under the current ACA structure, they'd just barely brush up against the subsidy cliff before the full price premium starts to drop off as a percent of income. Under H.R.1868, they'd save up to $1,400/yr. 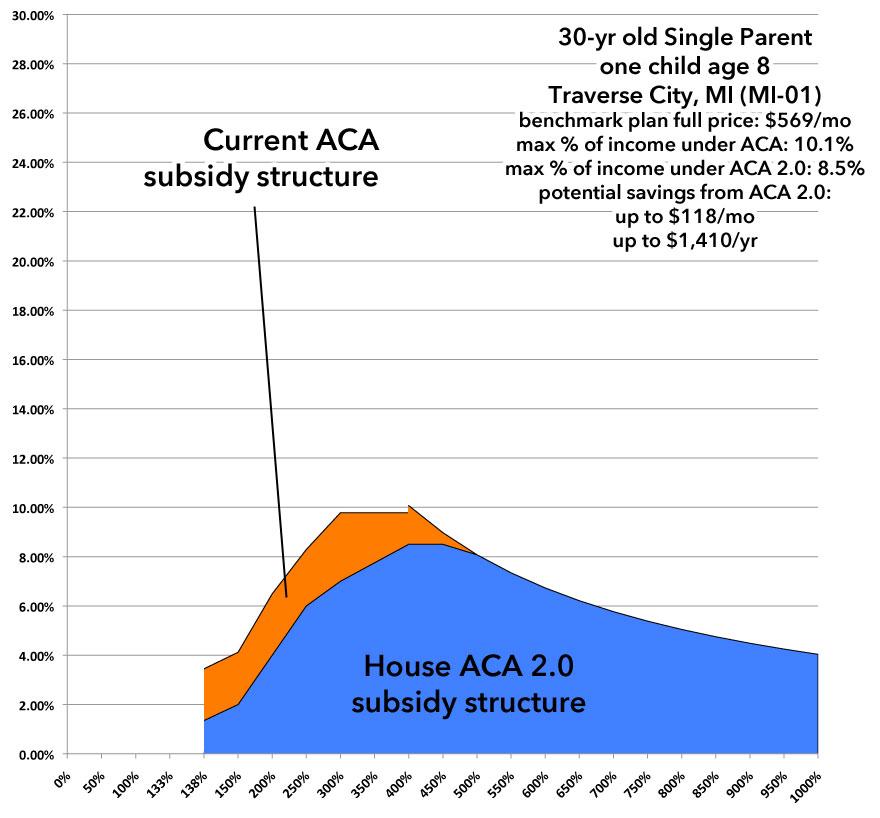 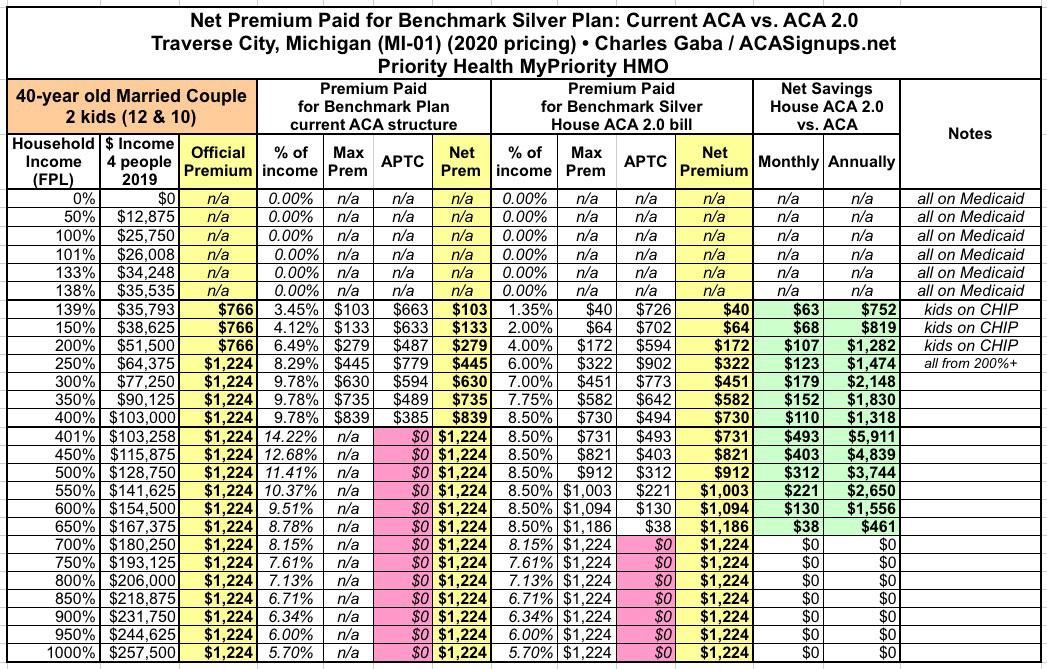 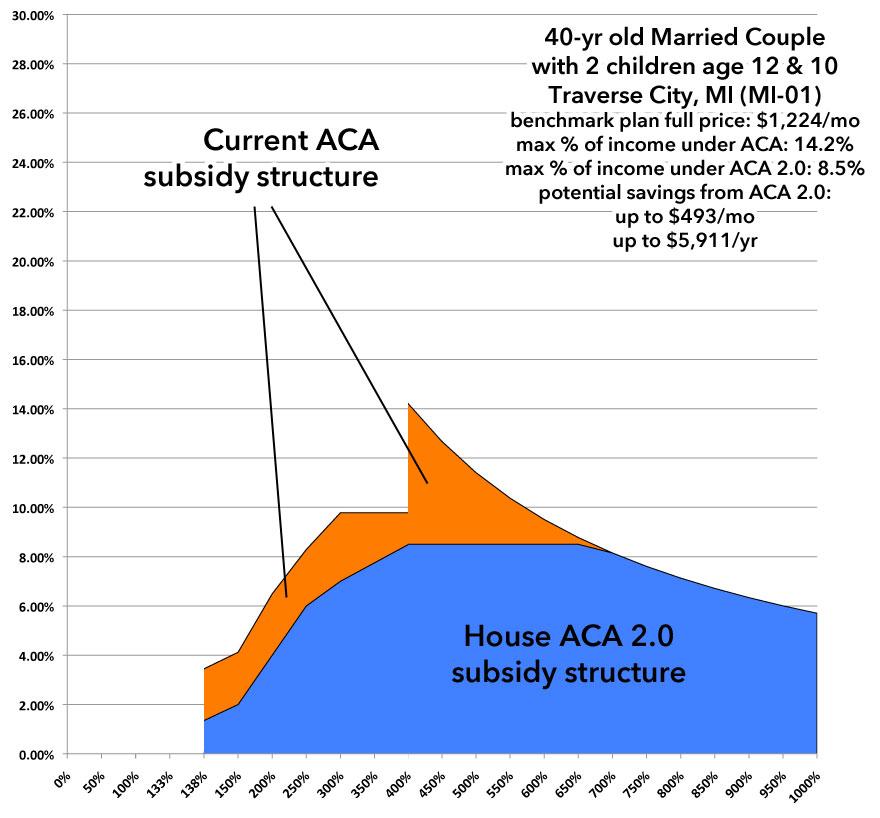 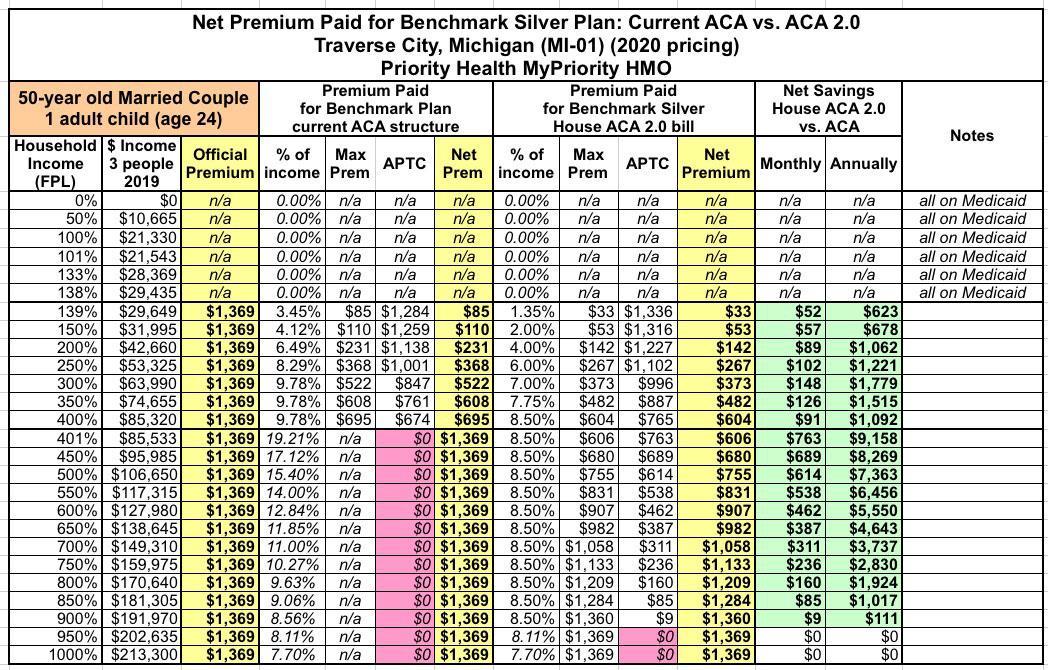 UPDATE: Please see "Solomon's" comment below for clarification regarding adult children who are not dependents of their parents; it can get a bit confusing 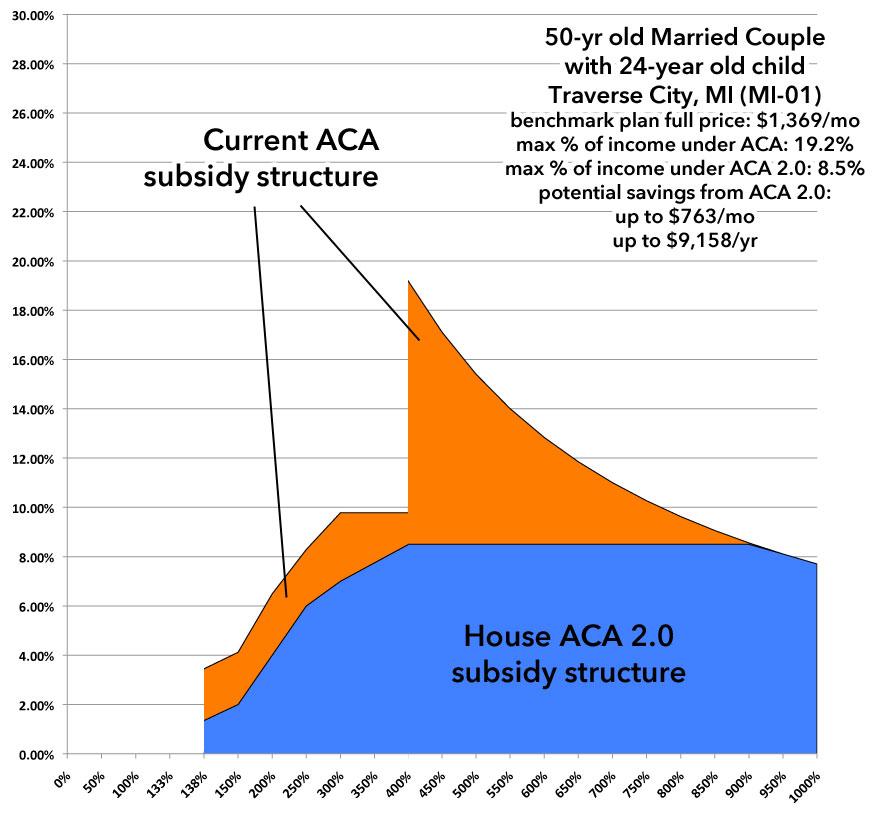 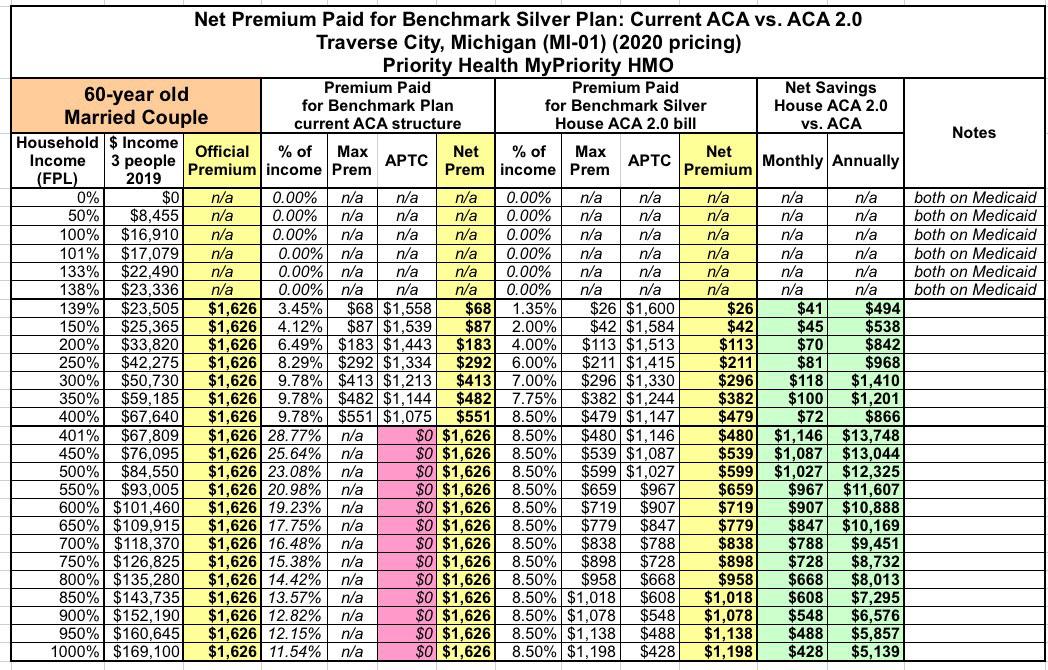 Under the current ACA formula, if they earn between $68,000 and, say, $140,000/year, this couple is almost certainly not going to buy any ACA plan unless one of them has extremely expensive conditions...at full price they'd have to pay as much as an absurd 29% of their income in premiums alone. 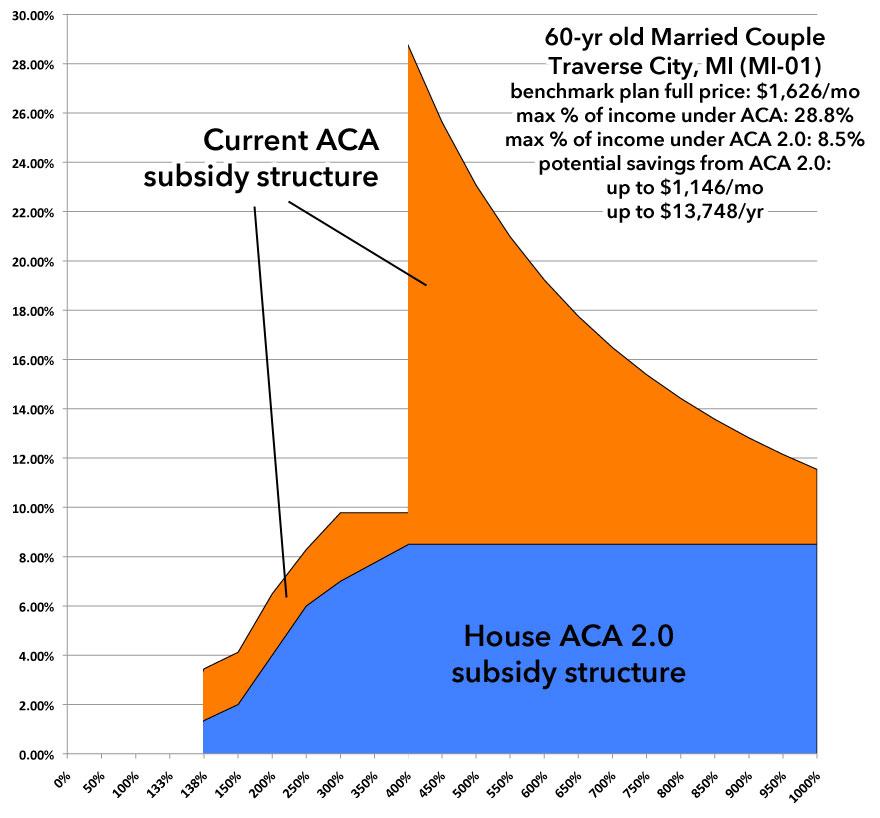 As I noted earlier, this is just the first in a series of (if I'm able to actually complete it) 435 entries. I can already say that going forward there's no way I'll be able to be as in depth and comprehensive as I was for this first one...it took me an entire day to compile and post by itself, and there's a lot of other important issues going on to write about.

For one thing, I'm probably going to have to cut out most of the orange & blue "cliff" graphics; they take a lot of time to put together and you pretty much get the idea after seeing one or two of them. I might make some exceptions in extreme cases, however. For another, my guess is that some districts will have the exact same benchmark plans as neighboring districts; in those cases I'll just post a single entry and mention which districts it relates to.

Even so, this will still be a massively time-consuming project, so I might go a few days in between posting districts. Stay tuned, though...