It got so out of hand that the then GOP-controlled House Energy & Commerce Committee (which was chaired at the time by Republican Representative Fred Upton from here in Michigan) actually sent out a (deeply flawed) survey to a bunch of insurance carriers demanding to know how many ACA exchange enrollees had actually paid their first premium. They then posted the results of their "survey" and attempted to make a huge stink about how, supposedly, only 67% of enrollees had done so.

SIDE NOTE: Interestingly, that press release appears to have been purged from the Energy & Commerce Committee website at some point between 2014 and now...thankfully, I was able to dig up a copy thanks to the Wayback Machine: 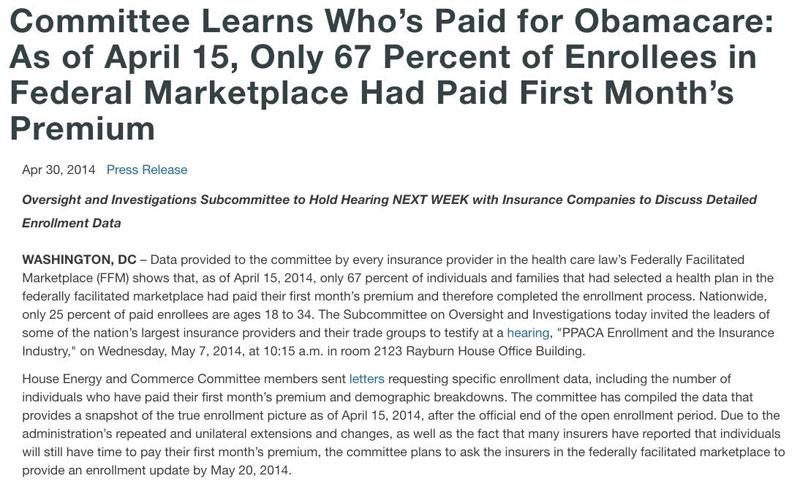 I can't begin to tell you what a huge stink they made about their BS "ONLY 67% PAID!" claim, and the news media gladly ate it up.

I tore their survey and press release to shreds at the time by noting obvious flaws like the fact that the 67% figure assumed that all enrollees as of 4/15 were supposed to be due by 4/15 (in fact, only about 63% of the total enrollments were due by 4/15; the rest weren't due until April 30th...the same day of the press release. Of course there's also the minor detail that the survey itself was sent out on March 13th, even though, again, around 40% of enrollees for 2014 didn't even sign up until after March 15th.

When the dust settled, it turned out that somewhere around 85% or more of enrollees did indeed pay up for at least the first month, though this varied by state and carrier.

Over the next couple of years I had some evidence suggesting that this average had inched it's way up a few points as the system was cleaned up and people got used to the process...but until today I didn't have hard, conclusive evidence of this.

One thing which has always made the "How Many Have Paid" issue difficult to parse is the fact that a chunk of enrollees weren't actually signing up until January or even February depending on the year, so their policy start date wasn't until February or March. This changed starting in 2018 when the Open Enrollment Period for most states was cut in half.

There are downsides to this change, of course, but one upside (at least for data wonks, anyway) is that the vast majority of enrollees hit the ground running on January 1st of the following year. There's a few exceptions (California, New York & DC keep 1/31 as their deadline, while Massachusetts and a couple of other states cut enrollment off in mid-January), but a good 95%+ of enrollments are locked in before New Year's Eve.

This means that the January Effectuation number from CMS's annual reports are now an easy way to answer the burning question, "But How Many Have Paid?" 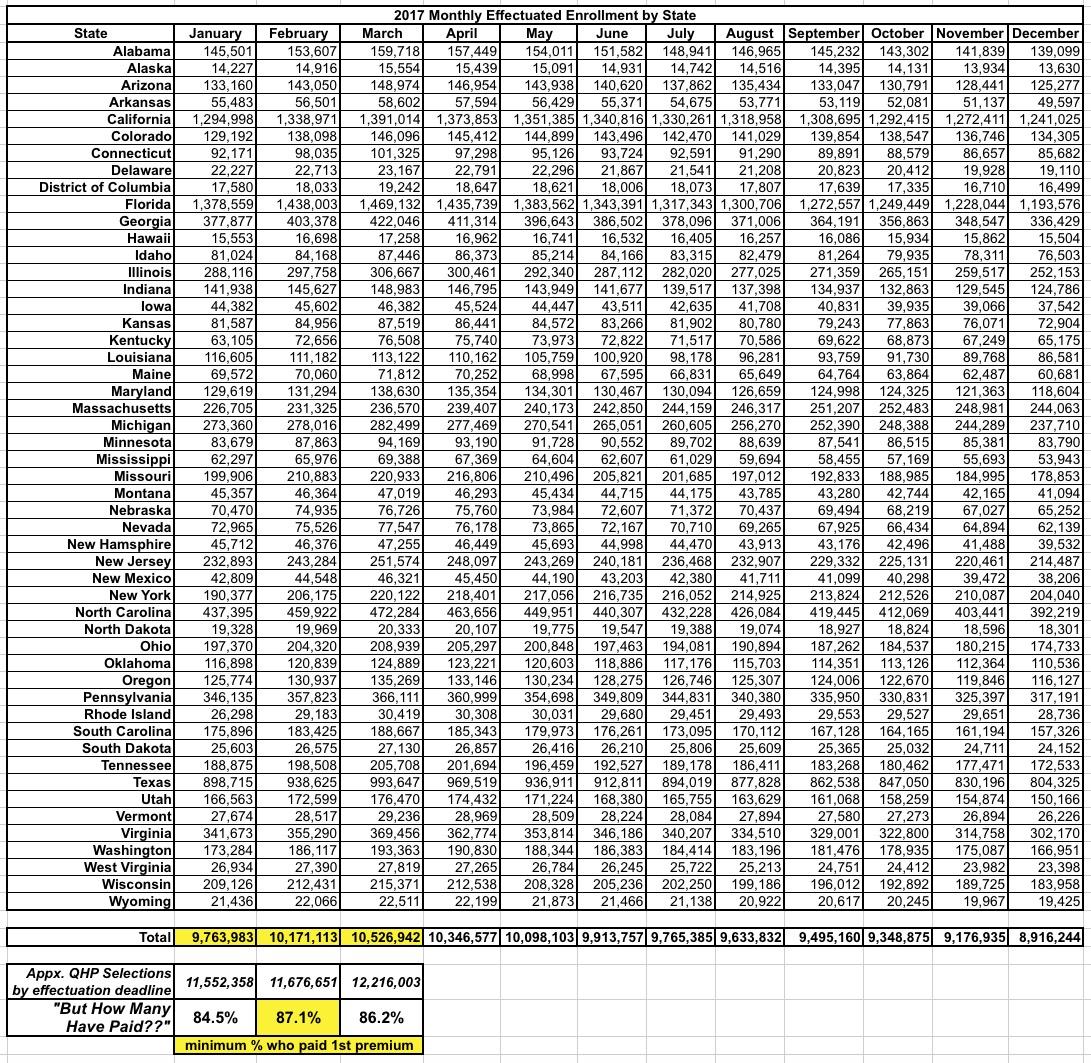 As you can see, in January 2017, 9.76 million people were enrolled in effectuated ACA exchange policies out of a total of 12,216,003 who selected plans during the 2017 Open Enrollment Period. That makes it look like only 80% paid for the first month...except that, again, OEP 2017 didn't actually end untl January 31st: 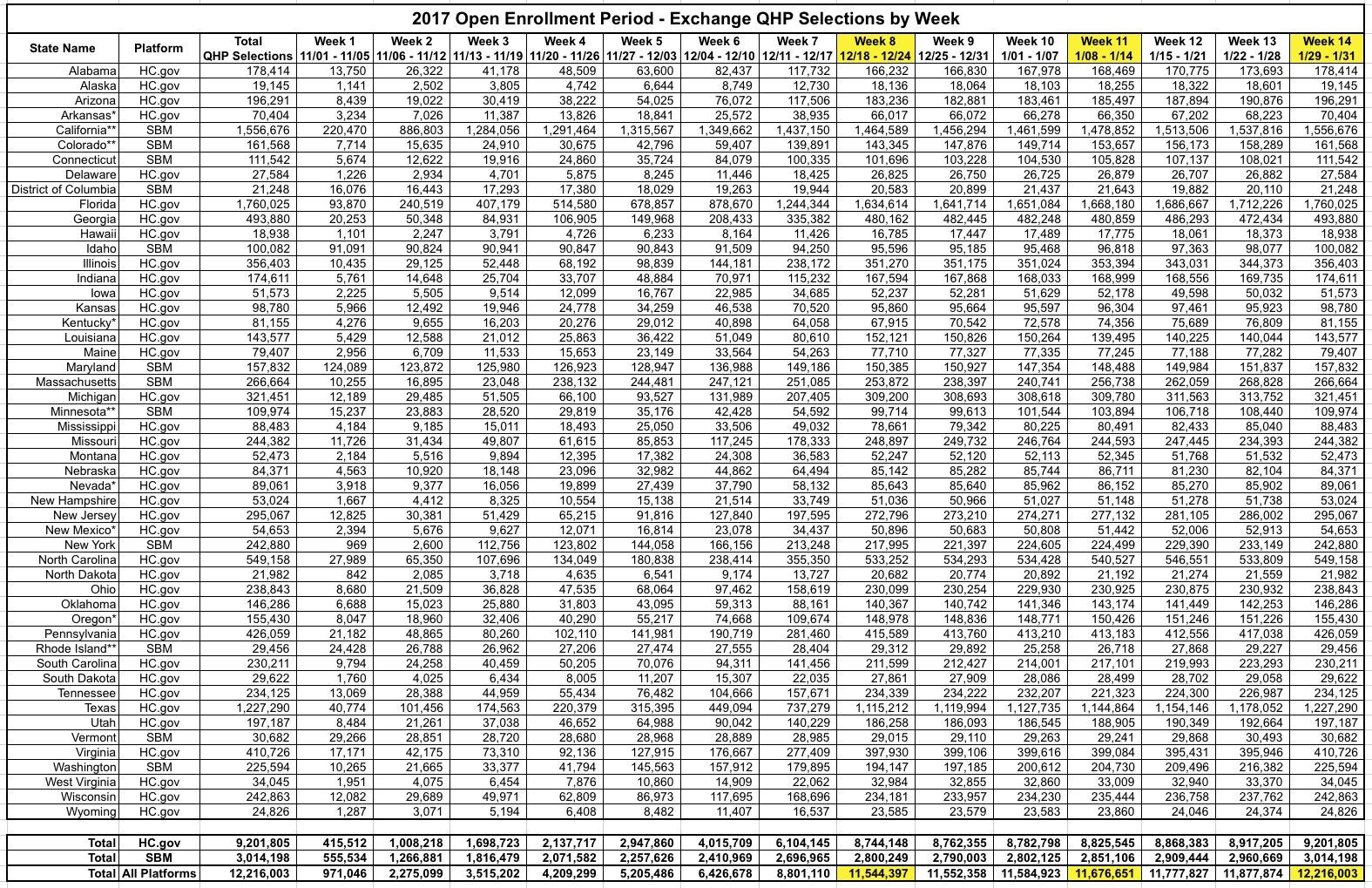 Furthermore, in most states, you have to be signed up by the 15th of the previous month in order for your policy effectuation to start on the 1st of that month, which complicates the situation further.

Therefore, the 2017 situation is a bit murky--of those enrolled by the end of December, at least 84.5% of them were paid in full for January coverage. Another 124,000 signed up by Jan. 15th in time for February coverage, pushing the payment rate up to 87.1%.

Then, during the final surge in the last two weeks of January, an additional 540,000 people enrolled in time for March 1st coverage; the payment rate appeared to drop to 86.2% in the end...except that a small number of January and February enrollees had already dropped coverage again, making this number fuzzy. It's safe to say that at least 87% of 2017 enrollees paid their first monthly premium.

Now let's look at 2018...the first year in which the shorter Open Enrollment Period ensured that all OEP enrollees in most states were signed up in time for January 1st effectuation: 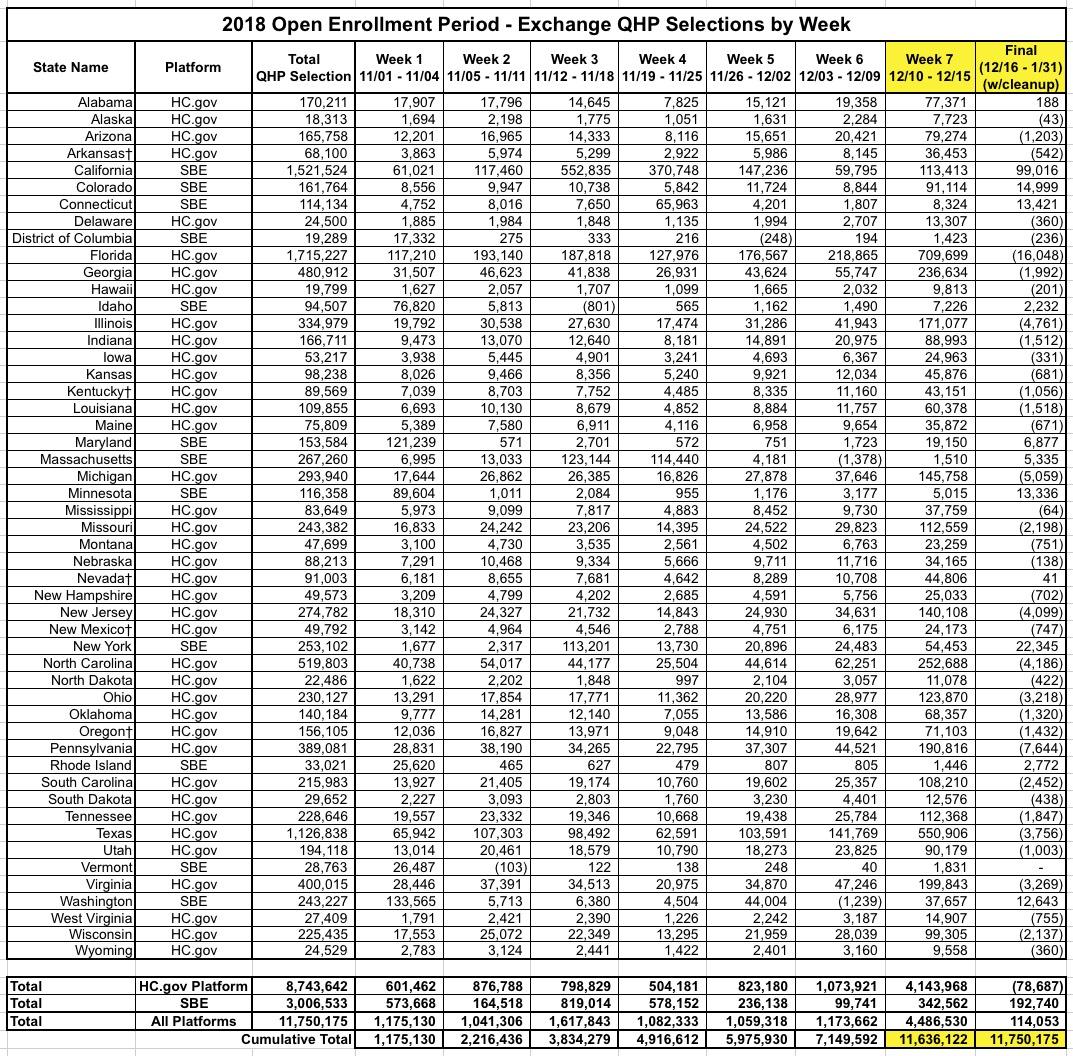 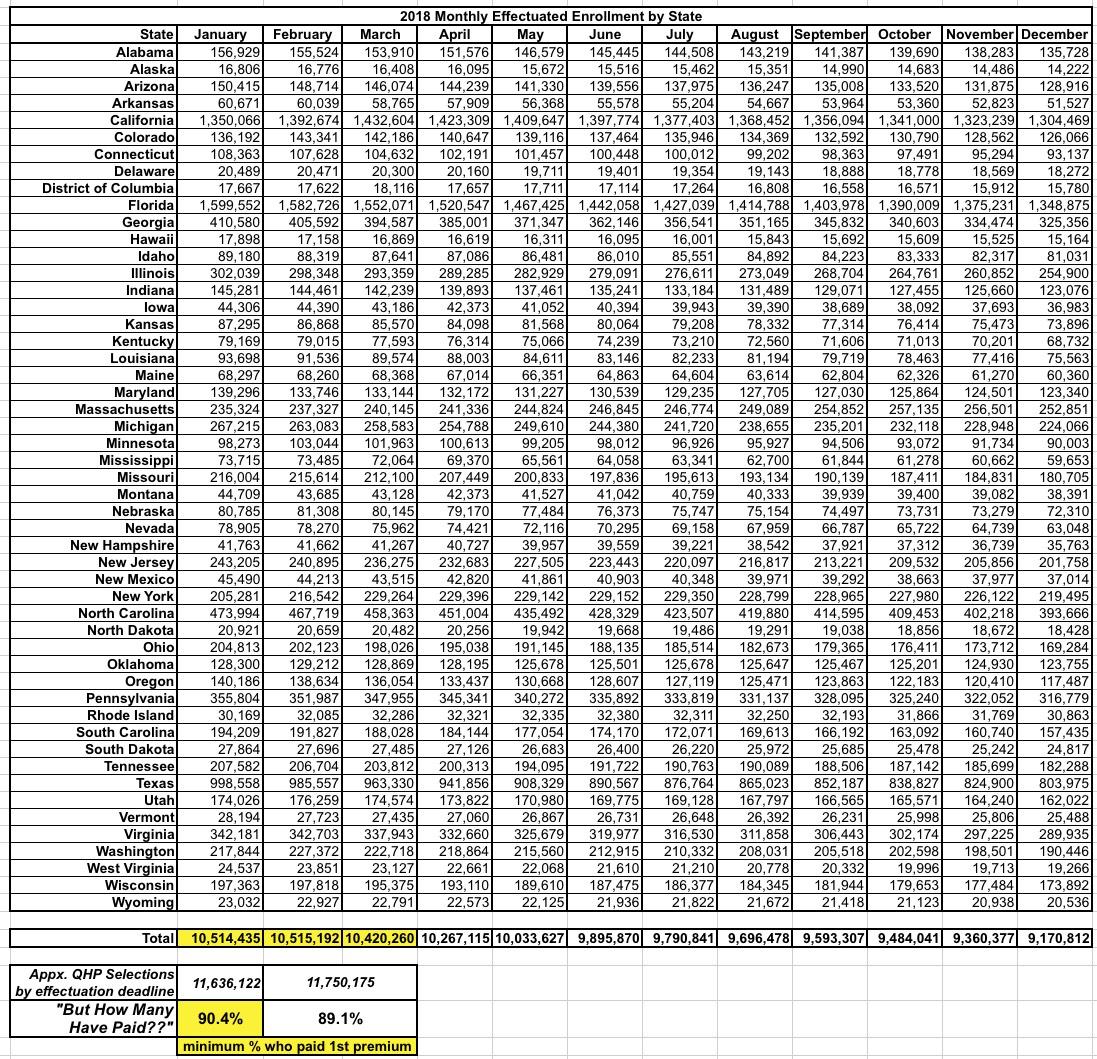 Even with all of that, the result is still that over 99% of the official grand total were locked in by 12/15 (or 98.4% if you include the 79K which were purged), meaning that 90.4% payment figure for January should be pretty damned accurate. When you throw in the additional 114K which were added between 12/16 - 1/31, it drops slightly to 89.1%, but again, that includes some slight amount of churn.

So there you have it: 90% of ACA enrollees do indeed pay up.

I'm sure Fred Upton will be apologizing to me any day now.