Insurance Commissioner Jon Godfread announced today that the proposed state-based reinsurance program developed by the North Dakota Insurance Department for the individual health insurance market has been approved by the federal government and will be in place for the 2020 health insurance plan year. The program was established within the parameters of the Affordable Care Act (ACA), specifically under Section 1332, which allows for state innovation waivers.

(I highlighted the last sentence to reiterate that reinsurance waivers are part of the ACA itself and have been since it became law in 2010...they just couldn't be implemented until 2017.)

“I’m pleased that the federal government has approved this plan to reduce the cost of health insurance for the thousands of North Dakotans who purchase their health insurance on the individual market,” Godfread said. “This program will stabilize our market and benefit our state’s farmers, ranchers and small business owners. These groups form the backbone of our economy and have felt the full effects of the tremendous ACA rate increases over the years.”

This state-based reinsurance program will:

House Bill 1106 relating to the establishment of an invisible reinsurance pool for the individual health insurance market was signed into North Dakota law by Governor Doug Burgum on April 18, 2019.

“We greatly appreciate the federal government for approving this waiver, and we thank Commissioner Godfread for his leadership and the Legislature for recognizing how this will lower costs for North Dakotans and provide greater stability in the individual insurance marketplace,” Burgum said. “This is a terrific example of how empowering states to seek solutions in the health care sector, rather than relying on a one-size-fits-all approach, can expand options and reduce costs for consumers.”

Godfread added, “This is a state-based program that will work for North Dakota. I’m pleased that the Administration has recognized that North Dakota is in the best position to determine what will work best for its people.”

The unweighted average unsubsidized premium change for 2020 across Blue Cross, Medica and Sanford is a 7.9% reduction. Medica specifically states in their filing that they would have asked for a 3% increase without the reinsurance waiver, but instead will be reducing rates by 17%. I don't know how much of an impact it's having on the other two carriers.

Meanwhile, the small group market in North Dakota is seeking an (unweighted) average 7.9% increase next year. 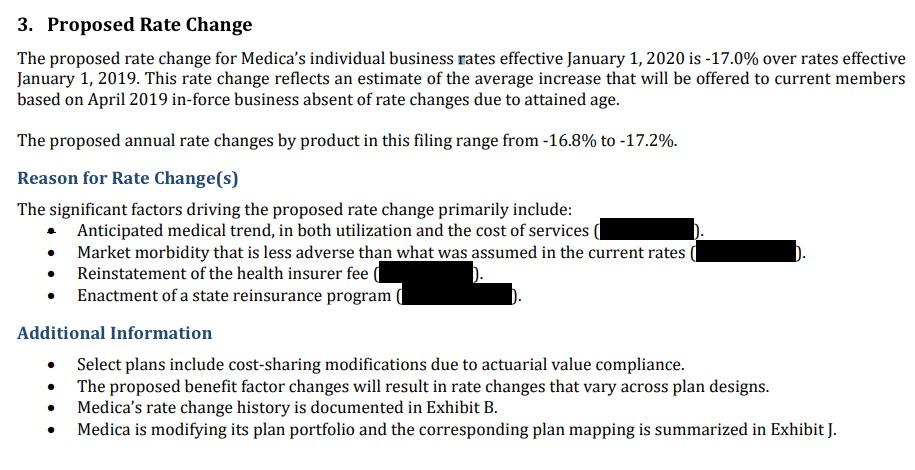