...but that there was actual legislation in the works to codify those restrictions (and others) into law just to be sure:

...In January 2019, HB285 was introduced by Rep. Micaela Cadena (D, 33rd District) in an effort to much more closely regulate short-term plans in New Mexico. The legislation passed out of committee with unanimous support in February.

HB285 includes the same durational and sales limits that the state has already implemented via regulation, but it goes further than that. The legislation would also give OSI the authority to regulate a wide range of provisions related to short-term plans, including minimum loss ratios and minimum standards as far as benefits that would have to be covered by the plans.

Assuming this bill were to become law, short-term plans would presumably not only be limited in duration, but would also have to meet similar (or the same?) standards of coverage as official ACA policies. Of course, if that were to happen, it would pretty much negate most of the point of enrolling in short-term plans in the first place (i.e., they tend to have significantly lower unsubsidized premiums than ACA plans due to not covering nearly as much)...but again, that's the whole issue in a nutshell. 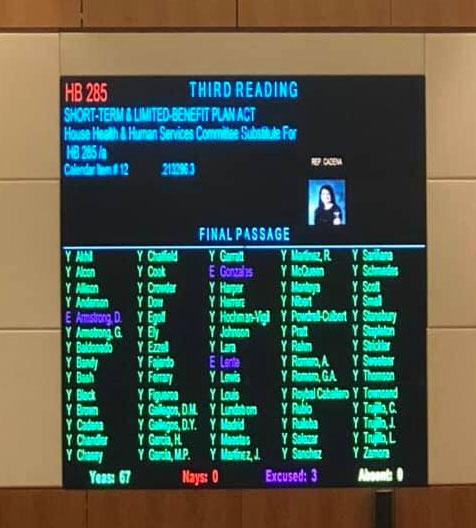 What's most interesting about this isn't that the bill passed--New Mexico does have a Democratic trifecta now, after all, with the state House, Senate and Governor's office under their control--but that it was a unanimous vote. I took a look and the NM House has 46 Dems and 24 Republican members, while the state Senate is 24 D to 16 R. Fascinating.